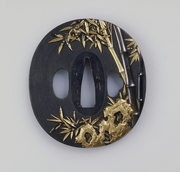 Japanese traditional metalsmithing techniques are broadly known in western culture, such as Mokume-gane, as well as their special alloys, Shibuichi and Shakudo. Nobuyuki Oshimoto will give us a lecture about interesting story about the history of Japanese metalsmithing.

About the Speaker:
Nobuyuki Oshimoto is a lecturer at Kawaguchi Junior College in Saitama, Japan. He has a BFA and MFA from the Metalsmithing program at Tokyo National University of Art and Music in Tokyo. In 2005, he researched Japanese collections at the Metropolitan Museum in NYC. He also performed several restoration projects in Japan, such as old swords and the arrow cases. As a metal artist, he works on his own creative projects in his studio and currently he is conducting research, teaching traditional craft to children in the special workshop style. His research has been sponsored by the agency for cultural affairs in Japan.

RSVP for Traditional Metalsmithing Techniques in Japan by Oshimoto Nobuyuki to add comments!

Comment by Brigitte Martin on March 9, 2010 at 5:43am
Thank you very much for the invitation ! This looks amazing, I am really sorry that I won't be able to attend !