The Association for Contemporary Jewellery 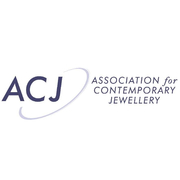 The Association for Contemporary Jewellery is devoted to the promotion, representation, understanding and development of contemporary jewellery in the United Kingdom and abroad.

The Association for Contemporary Jewellery

is devoted to the promotion, representation, understanding and development of contemporary jewellery in the United Kingdom and abroad.

Founded as a membership association in 1997 and registered as a Limited Company in 2006, it recognises a need to foster discussion, debate and critical review and interaction amongst its members. To this end we organise conferences, lectures, seminars, workshops and an annual general meeting for our members. Our regular newsletter, findings, features reviews, information, comment, book offers and discounts and is of benefit to both our members and the wider public. We also produce a monthly e-bulletin featuring news and opportunities.

We welcome as members practising jewellers, associated designers and crafts people, educators, students, gallery owners and retailers, museum curators, critics and collectors - indeed, anyone with an interest in contemporary jewellery.

ACJ welcomes to its membership makers, collectors, curators, educators, gallerists and all who have in interest in or passion for contemporary jewellery. ACJ organises exhibitions, conferences, events, talks and workshops for its members and the public. We publish our print magazine Findings twice a year, send a monthly e-bulletin to members, packed with news, information & opportunities, and we run social media accounts which reach over 10,000 people with news and information - Facebook, Instagram, Twitter & YouTube. We do all this on an annual budget of about £25,000, funded by membership subscriptions. Would you like to donate to help us further this work? Any amount is welcome! PayPal donations can be made here:…Continue

You need to be a member of The Association for Contemporary Jewellery to add comments!

As you have been on or enquired about a short course in Metalwork at West Dean I thought you may be interested to know that we run a full-time programme in Conservation of Metalwork, if you are interested in this programme and would like to attend our next Open Day for the full-time programmes, we are holding our MA,MFA and Diploma Open Day on Saturday 10 November 10-4 in which tutors, students and academic staff will be present to chat to prospective students about their options.

If you would like to attend the Open Day please register at diplomas@westdean.org.uk

Further information can be found via the following link on our website along with a timetable of the day. http://www.westdean.org.uk/CollegeChannel/FullTimeCourses/Applicati...

Short courses are available now from November 2012 – April 2013, courses from May 2013 – October 2013 will be available in January 2013. If you would like to receive a copy of the current winter brochure please email reception@westdean.org.uk


We hope to see you at the Open Day.

The contents of this message are for the attention and use of the intended addressee only. If you receive it in error, please inform the sender by return email. The Edward James Foundation Limited A Charitable Company Limited by Guarantee registered in England & Wales Registered Office: West Dean, Chichester, West Sussex, PO18 0QZ, England Company No: 6689362 Registered Charity No: 1126084 T: +44(0)1243 811301 F: +44(0)1243 811342 www.westdean.org.uk

Yarn Scrap Earrings at creativebug.com
Have you seen Creativebug's amazing site yet? I am honored to be part of it and am in awe of the company I am in of amazing artists that are contributing.

My first workshop is a playful pair of earrings made using recycled bits of yarn, you may recognize that I use scraps from other projects of mine. I'll show you how to design the earrings with colors and textures that reflect your personal style. The finished earrings are lightweight but make a bold statement.

My Open Studios is happening all weekend in Noe valley atTruesilver Gallery and I am having a special SALE offer! All stocked silver Stud Earring styles are priced at $30, that includes all of the NEW shapes I have added recently (hearts,

A singer, model, writer and actress, Suzy Solidor (1900 – 1983) was an intensely iconic figure of the Parisian night-life during the roaring twenties: she owned a nightclub in Paris, where she used to woo her audience with a staple of sailor songs in homage to Surcouf, the corsair of St Malo she claimed as her ancestor, or chronicle the love affairs of men and women. A self-avowed sexual predator, she openly dated both, and became somewhat of a de facto advocate of sexual freedom. Popular with German troops during the Second World War, her first club - la Vie Parisienne - was closed shortly after the libération, and Solidor forbidden to run an establishment for 5 years. She opened her next club in 1949, and moved to the French Riviera in 1960, where she stayed until her death.

From the moment she arrives in Paris from Brittany, Solidor becomes a sought-after model for painters, sculptors and photographers. She sits for everybody, it seems, from Cocteau to Bacon, and what probably started as an easy bread-earner for the young provinciale beauty eventually became part of the singer's mise-en-scène of herself: she slowly built-up a collection of more than 200 portraits of herself, which lined the walls of her successive clubs...and some of which she took with her on her travels. Forty of these paintings now hang in a room dedicated to her in Château Grimaldi, which is situated next to Espace Solidor.

Solidor is a modern-day Narcissus: hers is a fretful form of self-commemoration, and she is probably closer to the doubting queen in 'Snow White' than to the self-engrossed mythological character. While some of her more transgressive contemporaries used photography and painting to pick-axe gender determinism, these portraits were not an opportunity for her to transform herself, and elaborate on the androgyny that so seduced her audience. She seems more interested in using art to multiply and reflect her own image: her collection of portraits track her through the day (from nudity to cocktail dress) and over the years (they were painted over four decades), but rarely outside a quite repetitive format. In short, she is not Claude Cahun (or Cindy Sherman) but rather the Queen Mother of mermaids, using the creative pluck of men (and some women) to amass evidence of her sway over them.

Comment by Rebecca Skeels on October 22, 2012 at 2:21pm
Leo de Vroomen is a master in the art of Repoussé and is today recognised as one of the world’s most prestigious designers of bespoke jewellery. Following his apprenticeship in The Hague and qualifying as a Master Goldsmith in Switzerland he came to London in 1965. The company expanded rapidly and the distinctive De Vroomen style gained an international reputation.
We invite you to come and enjoy an evening with the iconic 'Artist Jeweller' as he discusses his life as a Master Goldsmith & Jewellery designer. These sessions are absolutely essential for students, those working in the trade, designers, makers and of course fans of fine jewellery and Leo De Vroomen.

Past guests at our Evening with... events have included Alex Monroe, Boodles Managing director Micheal Wainwright and Laura McCreddie, Editor of Retail Jeweller Magazine. For more information on these have a look at our news and events page and our blog.

*Free for apprentices of Holts Academy

For more details or to book your place please contact Kayum or Sarah at Holts Academy on 020 7405 0197 or BOOK ONLINE (please call for student discount code or to book over the telephone).
For more information and to see some of De Vroomen's fabulous work visit the company website at http://www.devroomen.co.uk/ or if you're on Pinterest you can visit the Holts Academy page and look at our Leo De Vroomen Board! To book a place at any of these Open Days, please call 020 7405 0197 or email info@holtsacademy.com

Our next up and coming course is the Getting Started Programme which will be taking place from Monday 21st January – Friday 25th January 2013. I am contacting you as someone who has previously, expressed an interest in Getting Started, taken part in New Designers or may be interested in the further support that Getting Started can offer.

Getting Started is an annual FREE week-long programme which has helped to launch the career of many of the industry's stars over its 32 year history. Delivered as a series of seminars and workshops, the programme focuses on the next steps for those wishing to pursue a career within the industry. The topics covered previously have included career planning, tips on how to become a successful designer, manufacturer or retailer and how to promote yourself.

Getting Started’s renowned speakers include designers, jewellers and silversmiths from across the field. If you are interested in applying, please download an application form from:

In the meantime, do not hesitate to contact me if you have any questions.

The Institute: To find out more about The Goldsmiths’ Institute:
www.goldsmiths-centre.org/institute

Courses: To find out more about Courses at The Goldsmiths’ Institute:
www.goldsmiths-centre.org/institute/courses

The Centre: To find out more about The Goldsmiths’ Centre:
www.goldsmiths-centre.org

Events: To book an event at The Goldsmiths’ Centre:
www.goldsmiths-centre.org/events

Comment by Rebecca Skeels on October 20, 2012 at 3:53am
Craft + Technology Residencies - call for applications

Watershed is offering three residencies for UK-based contemporary craft practitioners interested in exploring the potential relationships between craft practice and embedded technologies and/or pervasive media. Applicants are encouraged to consider how their existing practice might map onto the creation of objects that use technologies to extend and develop new forms of engagement between people, objects and making.

Residencies will be hosted at: Pervasive Media Studio (Bristol); i-DAT (Plymouth); the Autonomatic research group (Falmouth), in collaboration with the Crafts Council and supported by the Esmée Fairbairn Foundation. Go online for further background on the partners and their thoughts on this collaborative project.

Application deadline extended to 9am, 29 October 2012
Interviews will be held on 13 November in Bristol
Download the application pack

Architalx and the University of Southern Maine, Creative Intelligence & Innovation Lab invite you to:

Friday, October 19th from 7:30 pm to 8:30 pm, with Q & A after
Lee Auditorium, Wishcamper Center
University of Southern Maine, Portland
Admission is free

AT 6pm, prior to the talk there will be an Open House at the USM Design Science Lab

At the Goldsmiths’ Company Assay Office we have one of the world’s largest collections of fake and forged silverwear and jewellery. The possibility of overlooking a fake or forged item continues to daunt experts, jewellers, curators and collectors and so we run a Fakes & Forgeries Seminar to teach you how to spot them. This seminar takes place atGoldsmiths’ Hall on Monday 26 November.