If you will be renowned in the art, you’ll never be poor,
in any place.  This virtue is so glorious that,
if even once poverty would show you his cards,
then wealth will embrace you thanks to your art.”
- Maestro Filippo Vadi, Liber de Arte  Gladiatoria Dimicandi, c.1482

Let’s face it, most of us think we understand the realities of armour. In reality, there is a plethora of fallacious ideas regarding the function and form of this historical artform. Modern businesses produce lines of “armour” that range from the inaccurate to the absurd.  Unknowing practitioners, students and collectors purchase this armour and develop inaccurate ideas due to the incorrect fit, weight and mechanical functioning of the “armour”.  This, in turn, feeds back to the businesses that then produce altered designs based on inaccurate information.  Thus, a feedback loop of self-perpetuating misinformation has come to dominate the armour reproduction industry at the cost of popular misrepresentation of the Renaissance European martial arts.

Let’s imagine 500 years from now; our descendants express an interest in learning to operate automobiles and there are only fragmentary decorative Jaguars and Lamborghinis in museums.  None of them actually run or can have gasoline put in them for the sake of preservation.  Cheaper automobiles have long since been driven, repaired, resold, and scraped.  Their remains are the recycled additions to future building projects. 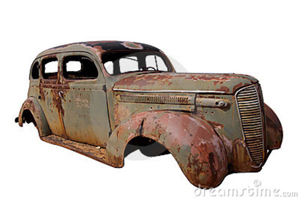 Yet, private individuals attempt to build automobiles from scratch by looking at pictures of well -preserved examples.  These intrepid individuals have never sat in an original car, so they do not realize the sheet steel used on them was thin and structurally well designed to be lightweight with built in crumple zones.  Future craftspeople might make these reproduction automobiles using the wrong materials.  Paneling might be made of extremely thick sheet metal, resulting in vehicles 2 or 3 times the weight of the originals.  Amateur driving clubs that deliberately drive and ram each other with their massive “cars” without sufficient damage verify the erroneous practice of overweight design to answer the need for protection.

But these future “cars” can only run for a few hours before running out of gasoline, leaving our descendants to believe we must have all been extremely wealthy to afford running such fuel inefficient machines.  They may marvel that a civilization capable of the Internet and pioneering space travel produced such inefficient means of transport.  Thus, craftsmen will use the feedback from these amateur “car” drivers to produce lines of ever-inaccurate vehicles.

Over decades, people will attend Post-Modern Faires where they will hold bizarre demolition derbies with drivers operating Lamborghini-esque tanks. People will wear costumes that feature fantastical versions of our own jeans and tee shirts that are uncomfortable and impractical.  You will see individuals wearing WWII era military uniforms, combined with a cowboy hat, Ugg boots and all while carrying peace-tied AK-47’s…because it’s a well known “fact” that our ancestors (us) were nasty and brutish.  It all makes sense because everyone knows how ignorant, stupid, uncomfortable, impractical and backward we were in ye olde 2014.

This analogy is a bit tongue-in-cheek, but it demonstrates a serious point.  We give this same treatment to our ancestors of 500 years ago based on our own collective erroneous assumptions.  The Medieval and Renaissance world created the cathedrals of Europe, developed the beginnings of our modern scientific methodologies and created the navigational technologies that lead to our eventual exploration of the stars.  They deserve better. 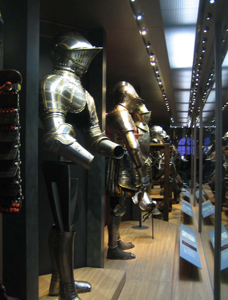 The armouring industry in Europe was just as massive and important to ruling princes and states as the modern military industrial complex.  One should not underestimate the methods used to produce the billions of rings of maille, the millions of intricate parts of suits of armour and the vast supply network of metalsmiths, miners, woodworkers, tanners, millers, and scribes needed to keep the industry going.  Whole cities devoted themselves to armour production, much as the city of Detroit developed around automobile production.  The guild systems of Europe tightly controlled and managed standardizations in quality, quantity, employment and production. Such an organized and powerful industry as armour-smithing would not have produced items of inferior quality and ability in service to nobility, wealthy mercenaries, monarchs, popes, emperors and state governments.

The common belief that armour turned mounted and dismounted men-at-arms into walking juggernauts barreling their way through the battlefield has been soundly disproven over the past decades through practical and theoretical demonstrations.  Armour was part of a fighting system and was not wholly defensive in nature. Once a historical martial arts practitioner understands proper period fighting, armour’s true offensive role becomes evident.  In un-armoured combat, the weapon is the only perfectly safe place to bind with an opponent. Armour turns the entire body into a safe zone for binding or parrying a blow.  It increases the role of body mechanics exponentially.  With armour and proper training, the entire body is a weapon.

The expense of armour is just as prohibitive today as it was historically.  Many modern Renaissance martial arts practitioners must limit their practice to un-armoured combat due to cost.  This is not a particular issue since a large proportion of the historical martial arts treatises researched by modern students cover un-armoured combat.  Those who choose to dedicate the time and resources to research armoured combat require quality equipment, just as un-armoured students do.  But while there have been outstanding developments in practice steel weapons over the past decades, the opportunity seems to have been missed in the production of armour.

Just as there are many talented, highly skilled and informed armour-smiths currently practicing throughout the United States, Europe, India and Asia. But these skilled individuals are being drowned out by vast quantities of poorly produced pieces that amount to little more than costumed props.  They are cheap, easy to produce, easy to purchase online and they seep into the martial arts community due to their ubiquitous nature. To catalog the full range of inaccuracies in modern costume armour production would be a mammoth undertaking and, within the confines of this blog, a futile enterprise.  Instead, comparing one example piece with a historical original can give a general understanding of the fallacies practiced by mass-production houses.

The “suit” pictured above on the left is advertised as wearable and “battle-ready”.  It is neither of these things.  It is a waste of money due to its uncomfortable, heavy and impractical nature.  Uninformed individuals made it based on unsubstantiated examinations of historical originals.  It’s manufactured using inappropriate techniques and no experience in actual martial combat.  This armour costume (and others like it) would constrict the wearer to the point where they could not move properly and execute historical techniques to their proper extent.  Sadly, it is what so many people purchase as real practical armour.  Compare it to a piece of original German armour from the 15th century on the right.  It is obvious that the first piece attempts to emulate the second, but at a sever loss of correct biological geometry. Medieval and Renaissance artisans knew the functions of the human body.  Human proportion was part of the artistic revival that defined the Renaissance.

A feedback loop of misinformation has lead to modern armour that is as far removed from historical reality as the future “cars” I described in the opening analogy.  Armour produced by modern businesses are often made of cheap, inferior grades of steel.  They are either too thin or too thick and use modern fabrication methods more appropriate for mass production. Even when there is an attempt to produce accurate armour, it tends to miss the mark due to the needs of an uninformed wide market.  The interest is in quantity of production instead of quality.

The modern “armour” on the left shows two very common misinformed practices.  First, the breastplate is too long in the torso, ending well past the body’s center of mass.  A wearer could not bend or move properly while wearing this breastplate.  It’s simply not modeled to fit a realistic human torso; it is a costume designed to look good on a website so someone will click “add to cart”.  Secondly, in its attempt to emulate the fluting commonly used in Gothic armour, the manufacturers resorted to the use of a bead roller to produce the flutes.  Bead rollers weren’t used in metal fabrication until the mid 19th century. The use of a historically and technically inappropriate tool results in armour that is limited by the automated mechanical nature chosen by the craftsperson. Historical 14th, 15th and 16th century armourers were not participants in the later 18th and 19th century Industrial Revolution.  Medieval and Renaissance metal fabrication practiced a completely different methodology that, while labor intensive, was rooted in a holistic thought process based on skill rather than hyper-specification of labor.  When a modern craftsperson replaces the capabilities of an automatic power tool built to perform one standardized task and embraces their own wide-ranging capabilities, they take the first step into the real world inhabited by their crafts ancestors.  It’s a difficult step to take, but it moves ones work out of the realm of cheap imitation and into a higher plane of true art. Valid martial arts must be practiced with tools created by valid craft arts. 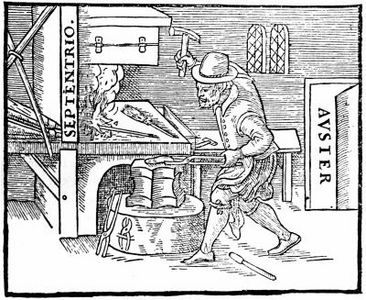 This is a very difficult task for inhabitants of the modern mass-produced world.  The Industrial Revolution permitted humanity to own more items produced using less labor and we are the children of that system.  Modern culture has indoctrinated a sense of entitlement to products our ancestors could have only dreamed of.  If someone wants their very own suit of armour, it’s made available through the laws of supply and demand. Armour-like objects are affordable to a wide consumer base by using cheap sources of labor and taking varying degrees of technical and physical shortcuts. Online debit and credit card transactions make the interaction between producer and consumer even easier.  A cheap facsimile of the armour of our ancestors is easily accessible through Visa or MasterCard.

Our ancestors knew the true value of ability was not purchased, it was learned.  If we want to avoid the future reputation of ignorance, stupidity, and impracticality we ignorantly accuse our ancestors of, perhaps we need to reevaluate the wisdom of those same ancestors.  Otherwise, we doom our memory to the absurdities evidenced in future equivalents of Renaissance Faires, and bad Hollywood movies. When we allow mistaken interpretations of history to enter the popular conscious, we doom ourselves to relive a history based on those mistakes.  That is when ignorance becomes truly dangerous.