Once a good illustration is made, I then need to match the image with the measurements.  Breastplates of the period are actually made of five different parts: the breastplate, the shoulder lames, the plackard, the fauld and the tassets.  Each of these components must build off of the breastplate.  A lot of designers and amateur armourers tend to over size and over accentuate the breastplate because of its instinctive importance.  This piece of metal protects most of the vital organs and, with the exception of the head, is one of the most vulnerable parts of the human body.

This natural instinct to enlarge parts of the body we are most aware of result in some critical technical errors amongst those without a practical knowledge of how the body moves.  I will address this phenomenon in another blog, but for now, we need to understand that the actual height of a period breastplate extends from about 3”-4” down from the base of the throat to just at the bellybutton.

On an average sized man, that's only about a foot, maximum.  This doesn’t seem to be a very large measurement and the instinct to lengthen it must be resisted.  Technical measurement and a trust in mathematical proportion need to take precedence over assumed aesthetics.  These armour pieces were, after all, results of the Renaissance, a period when exacting proportion and scale were highly valued. 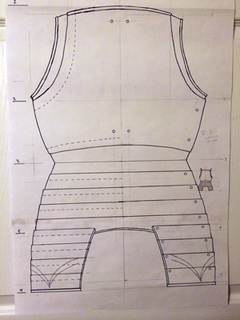 With these measurements in mind, I draw out scale schematics of the armour.  These working drawings are different from my illustration.  They are intended to function as tools during my construction process.  The objective is to give myself a guide as the armour develops so I don’t stray too far off of the measurements of the client. Just as the breastplate is the cornerstone piece upon which the rest of the pieces are built, so too is the case with the working drawing.  By starting with the breastplate’s length, width and height, I can tell how far out and down the other pieces need to go.

In the working drawing shown here, you can see that the curvature of the breastplate comes out severely and then tapers down to the waist about where the client’s center of gravity is.  This is where they would bend naturally and it forms a crucial part in distributing the weight of the armour. 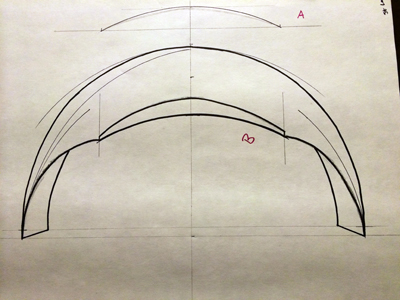 The bulge of the breastplate does not mimic the form of the body but is rather a more architectural feature.  If you look at the breastplate in cross-section, it forms an arch that transfers the force of a blow out and away from the body’s center.  This means that a hit that would normally incapacitate gets distributed about the rest of the body.  This principal is the same in Romanesque and Gothic cathedrals!

Quote: "Breastplates of the period are actually made of five different parts: the breastplate, the shoulder lames, the plackard, the fauld and the tassets. "

Parker, I love your posts - would you mind giving us an image of the parts you describe and where they are on the armor? I do not know much about your topic, whatever image descriptions you could use would be great in helping us learn more.

Thanks - and great job on the blogging by the way !!! Love your topic. The more detail the better, we are all real nerdy that way. ;-)

Hopefully this will help clarify things :-)