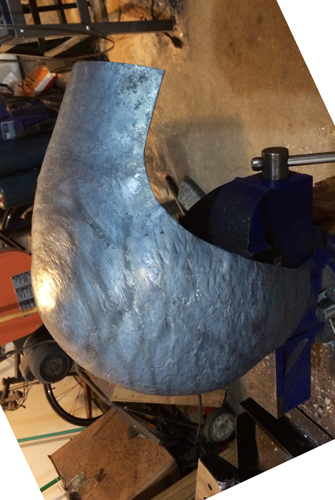 Raising the breastplate is, by far, the most labor-intensive portion of the project. Each successive raising course tends to take up to about 2 hours. The temptation to rush must be resisted; precise movement of the metal is necessary to insure a proper fit. That said…..make sure you’ve got something really interesting to listen to while working. I’m currently listening to books on tape relating to Anglo-Saxon England. It’s kind of fitting, don’t you think? 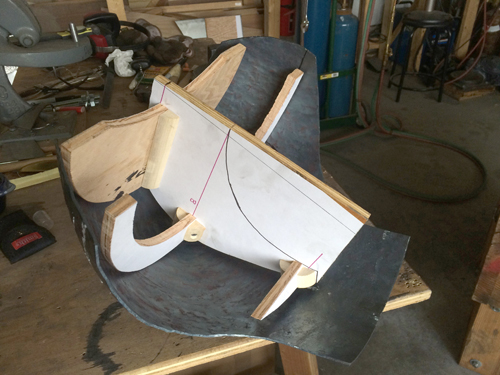 With each raising pass (after taking a break for coffee, looking at Facebook and pictures of cats), I use my cut template to assess what areas need to be moved and which areas do not. Unlike with a regular raised form, the breastplate is symmetrical only along one axis. At a certain point, you will have moved the metal where it needs to be in one area while another still requires work. Finally, after my fourth raising pass, the profile along the vertical axis was where it needed to be. But I noticed that the horizontal axis was more pointed than I would liked. From photographs of the original, the surface of the breastplate was spherical, rather than pointed. In other words, I had made a Gothic arch when I needed a Romanesque arch! 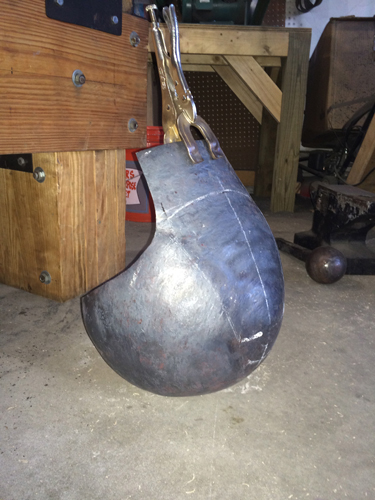 Because the breastplate was already so close to its finished shape and because the area of necessity wasn’t at risk of thinning, I chose to dish the region into a form that closely matched the needed curvature. While this resulted in the desired shape, I now had to deal with the breastplate being too narrow.