This is the critical stage of the project where all temptation to play Minecraft must be resisted so that I can practice some ACTUAL craft skills. Yes, it’s neat that you can reconstruct Notre Dame cathedral in a virtual world, but it can’t be submitted to the SNAG Exhibition in Print, can it? So, onwards and upwards.

With temptations managed, the next step of the cuirass is to construct the tassets (see the image below for a refresher on the parts of a cuirass). 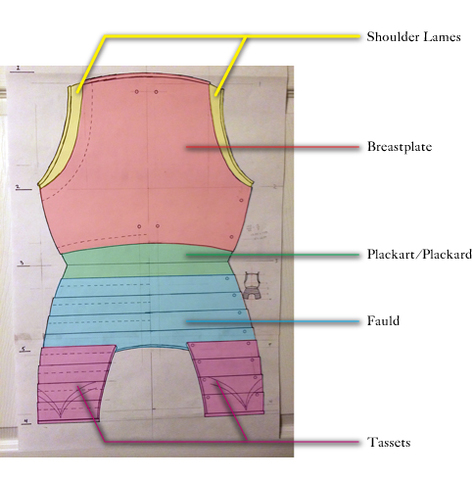 Essentially, the tassets follow the same methodology as the fauld. Using painters tape, each plate is patterned after the previous one until all of the overlapping pieces are accounted for. The tasset marks the end of the cuirass and should terminate just at the middle of the thigh. With a full suit of armour, the upper portion of the leg armour (cuisse) would lay just under the tassets, but for now the client only requested the cuirass. 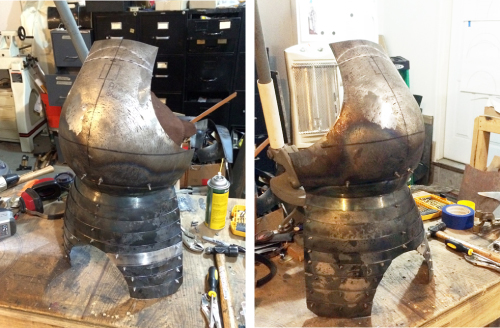 With the tassets rough formed, it’s now time to roll the upper edge of the breastplate. As one can imagine, this can be a daunting task especially considering the substantial size of this particular roll. Like most cuirasses, the roll serves multiple purposes. Rolls on armour serve to reinforce plates, giving added rigidity without increasing weight. In the case of the von Hellingen cuirass, the upper roll is

substantial because it not only give structural strength to the breastplate (where most hits would land in combat), but it also creates a barrier to protect the throat. Should a weapon hit the breastplate and slide, it will be diverted away from the throat and major arteries of the neck. Of course, on a full suit, the wearer would also have a gorget (neck armour), but the addition of a roll on the breastplate simply makes sense.

The mechanics of hammered roles is both simple and complex. For a greater understanding of how to execute a roll on armour, here is an excellent tutorial from fellow armourer, William Hunt:

Essentially, a roll requires a vast amount of control with the hammer to gently coax the edge of a piece of sheet over itself to form a rounded edge. There are a variety of rolls in armour from the substantial to the delicate. For this cuirass, the rolls are somewhat flattened and almost resemble folds rather than rolls.

Before rolling a plate’s edge, the piece needs to be sanded to a rough finish. The upper breastplate role requires the piece be trimmed and then the upper edge is hammered over flush then it’s hammered over to a 90° angle. The result is a very strong reinforced edge that greatly increases the structural stability of the breastplate.

The remaining rolls are made to the interiors and bottom edges of the tassets, the bottom of the fauld and along the interior edges of the pectoral plates. The process involved many hours of work, but the result brings the cuirass to its final form ready for finished sanding, polishing and decoration.