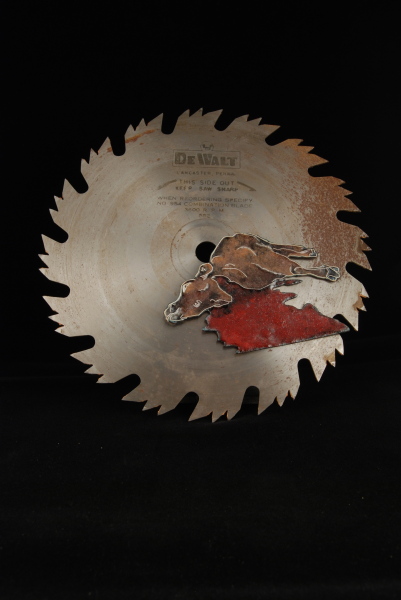 CRAFTHAUS:  Which school did you go to for undergrad?

DANIELLE:  I got a BFA in jewelry metals from Millersville University.  Had I stayed for an extra semester I would have received a minor in theater as well, but it simply wasn’t feasible. I had already been in school for 5 years at that point, I needed to get out of there.

CRAFTHAUS:  It’s interesting to hear about your interest in staging and theater production and how you love building things in general. It struck me that your work definitely has a theatrical quality to it. The way you place a slain animal on a saw blade, that is certainly quite dramatic.

DANIELLE: Thanks for saying that. Drama, yes, that’s me.

Where I grew up in Delaware, my parents’ house is right at a major highway and on the other side of that highway is a 44 acres farm. Every October, for the whole month, there was a carnival taking place, complete with haunted houses and around 200 employees. Ever since I was little I had wanted to work there. My parents wouldn’t let me until I turned at least 15 and when I was finally allowed I loved it and ended up working there every October from the age of 15 to 24. 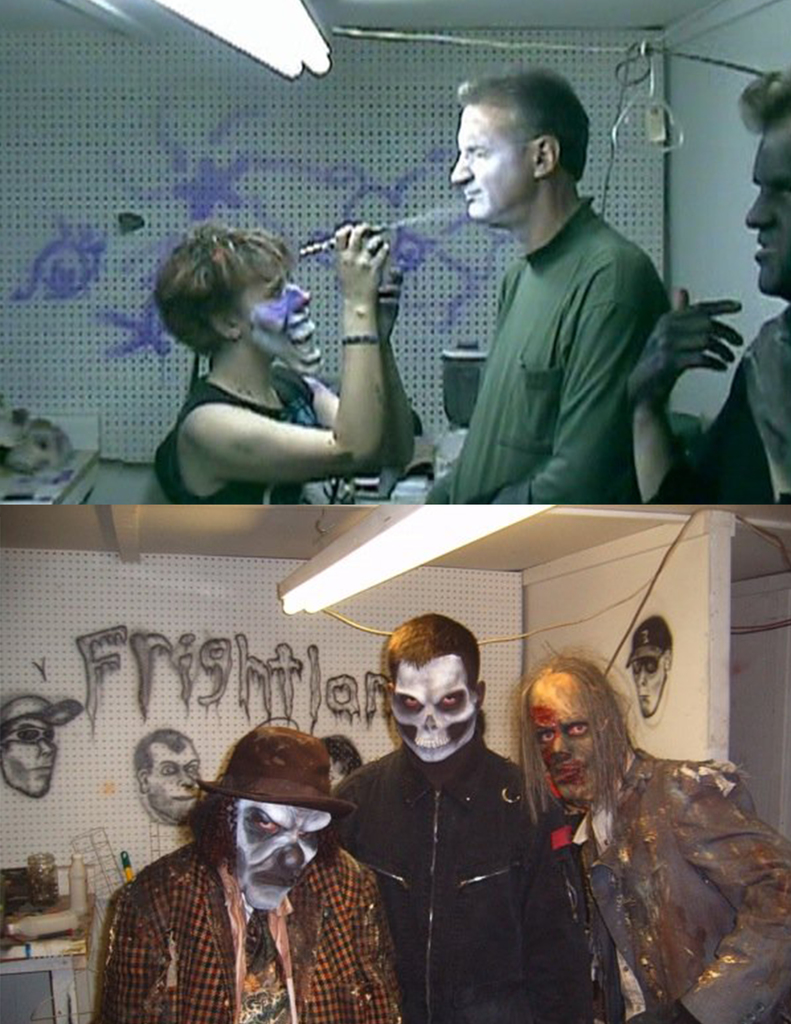 Frightland Haunted Attractions: Every October from age 15 to 24 I worked there on the makeup crew. I am the scary clown on the left side in the bottom photo. (DJ)
Photo by: Scott Lester.

As I got older, I worked in their make-up department doing all the air brushing for the zombies, clowns, and everything else we had going on at the carnival. I got paid to scare the stuffing out of visitors by painting a barn to look like it had fallen over. We staged the inside of the barn to look like a giant library complete with moving walls. To make it look real we had to secure loads of books as library props, we sawed them in half and nailed them to the walls. Yes, it was all theater, only a bit more in your face, hard core, blood, guts and stuff. You mentioned the saw blade and that’s what made me think of that story again. I have a pretty sick sense of humor according to my mother.

CRAFTHAUS:  That’s funny.  So, when did you graduate from Millersville University?

DANIELLE: I graduated in 2010, in December. That’s also when I met Erin Kaufman, a graphic design graduate. I already knew her from school, we had had some classes together and we clicked. I don’t know how this came about, apparently we didn’t have any real-life problems at that point, so we simply decided to get together and make jewelry as a team and see if we could get some sales going. I did the metal work and she did the marketing for our little venture. It was mostly silhouettes that came out of that collaboration, we hammered stuff out on steel wire, really simple. Most of our work sold locally and we actually did pretty well financially.

As a “thing,” we each got our septum pierced and one day Erin went to some sort of dress-up party. She had a little wire mustache made, which she threaded through the hole in her septum and off she went. When she returned from the party she told me that a lot of the guests had loved the mustache and wanted to get some for themselves. That was very encouraging news for both of us. We did some quick research and found titanium wire which is hypo-allergenic and can actually be put in your body without any issues, in contrast to steel.

We ended up making a whole bunch of mustaches in different styles from titanium wire, we called them “Falsestaches” and our sales totally exploded. We had a lot of etsy sales all of a sudden, to the point that I was able to pay my rent with this project. It went very well for us and it was fun. It wasn’t anything spectacular craft-wise, but it was a good way for us to get our feet wet. CRAFTHAUS:  Why do you think the mustaches were such a success?

DANIELLE: Because mustaches happened to be a really big, fashionable thing back then. That’s the only reason and because we had a lot of weird, crazy friends who liked them. It just happened to be the kind of network we existed in. Oh, and another happy coincidence: A brewery started hosting the “National Beard and Mustache Awards”, we got in on that too!

In essence, we were just in the right place at the right time and that’s why it worked out for us. We did the mustaches for a little more than a year before I got accepted into grad school and Erin and I had to part ways. She was also getting more of a foothold in her actual career, graphic design. Life happened and we just left it at that. We’re still good friends though.

When I think back on it all, honestly, I would've never gotten into this collaborative mustache project had it not been for Erin. I’m an only child and had never been keen on working with someone on a team until I met her. That was the great thing about our relationship, it just worked. It’s amazing when you find that someone with whom you don't have to complete your sentences, they just get you. Until then I had not known anybody who had gotten that close to me. That was an amazing experience.