On Friday morning, lectures began at 8:30, but some of the Yuma participants gather at Red’s Bird Cage for Bloody Mary’s in honor of David (Dave) Pimentel. 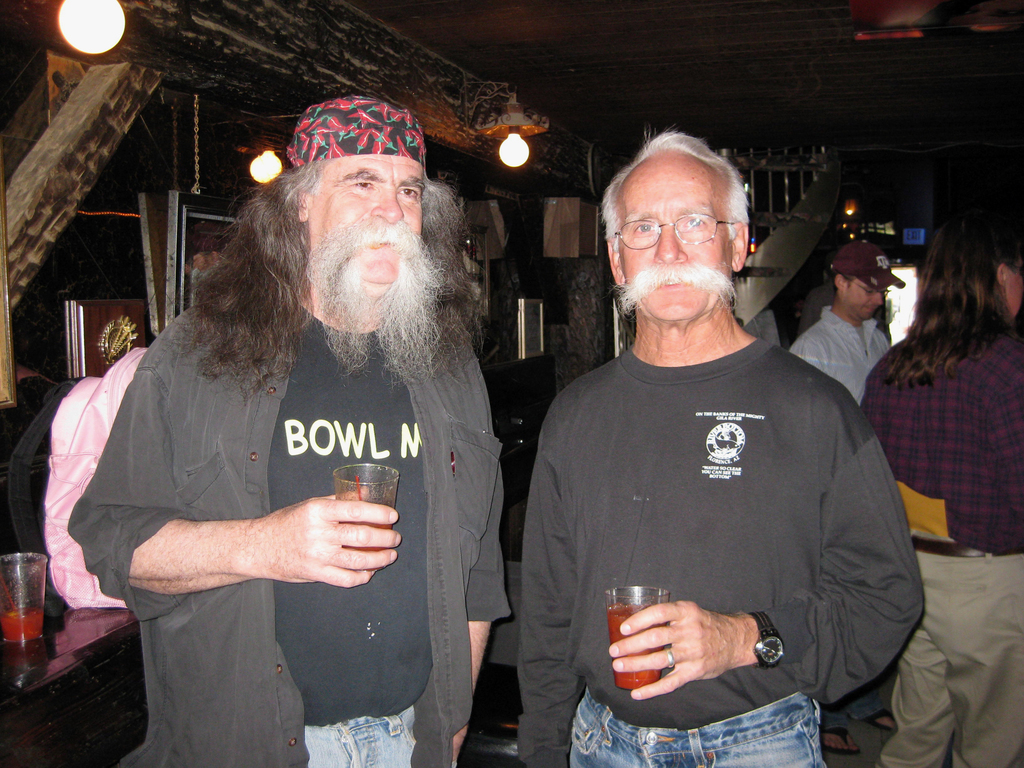 Dave passed away in 2004 and was a respected artist and professor at Arizona State University.  ASU lost Dave the year before I arrived in graduate school.  The students who were left behind were strong individuals that dealt with mourning the loss of a man they cared for while also keeping the program alive and strong.  These strong and caring individuals were motivation for my attendance at ASU.  Although, I didn’t get to meet him, I’ve met the alumni he left behind and his Yuma family.  He was obviously a great man and metalsmith.  Dave was a permanent fixture of the Yuma Symposium and he is constantly remembered and missed.  This morning ceremony is just one of the many family oriented events that occurs at the Yuma Symposium. 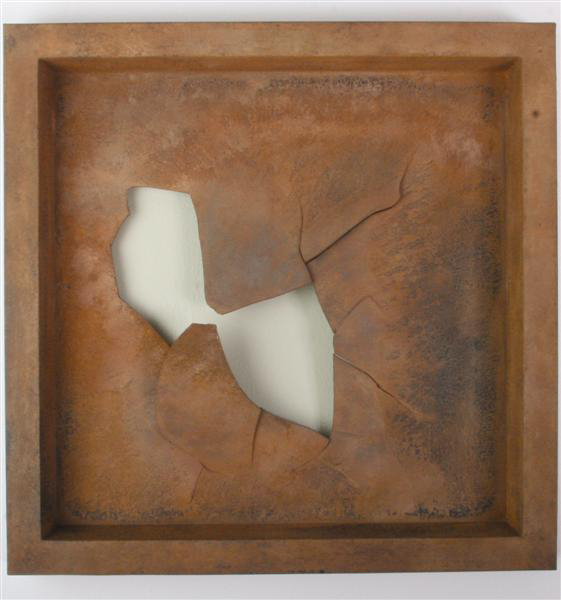 Gary Griffin, well-known and respected artist spoke at the Yuma Theatre at 10:15.  Gary worked as an artist in residence and instructor at Cranbrook Academy of Art for 22 years.  He spoke of his experiences working as a resident at Kohler from January 2- April  21, 2007.  Some of the work that appealed to me the most, was the work that completely responded to material.  It seems like Gary has a special gift for understanding material.  In one body of work, Gary created a series of frames that included a thick frame with a very thin picture plane.  As this form was cast in cast iron, the metal naturally traveled to the thick frame and had difficulty filling the picture plane.  After doing foundry and investment casting, I have found that this thick and thin aspect of cast objects is one of the most frustrating trials.  It is inspiring that he used a technical difficulty and made it truly beautiful.  He also discussed working at the Kohler factory as an artist in residence.  Kohler is known for casting sinks and bathtubs especially.  For more information about the Arts/Industry program, visit here.

Another set of works that called to me in particular was his forklift prints.  Graphite often accumulated on the floor of the Kohler factory from the numerous sand casts.  Griffin asked forklift operators to assist him in the creation of large prints on paper including the mark making from forklift wheels.  These prints are not only rich and beautiful, but had a strong effect on the fork lift operators that acted as studio assistants for a couple of hours.  As an artist, I was inspired by his attention to material and was interested in some of the lessons about the formal aspects of the way we work.  For instance, Griffin discussed the many uses of asymmetry to gain interest from the viewer.  Often Griffin creates fences that appear to be symmetrical.  By changing small portions of the design, the works are asymmetrical in a manner that tricks the viewer into exploring the visual elements and principles.  Finally, as a lesson of making, I really enjoyed his exploration of one simple and historic aspect of blacksmithing… the twist.  He used the twist from blacksmithing and deconstructed and reconstructed this traditional blacksmithing technique to explore its capabilities in design.  This was a strong reminder to me about the beauty of simplicity.

After lunch and a small nap in my tent back at the Pottery Studio (I am a proud believer of siestas.  I’m not ashamed), I returned to see Jenny Robinson give a presentation in the Yuma Theater about her printed works. Jenny’s work is absolutely breathtaking.  She creates large-scale monoprints using dry point and multiple layers of color.  Although I’m not a traditional printmaker, I have always loved the techniques of intaglio and silkscreen especially.  Of course etching is extremely useful to a metalworker and I always enjoy the creation of marks using a tool as an extension of the hand.  Jenny’s work includes imagery of architectural forms that are often left to deteriorate over time (billboards, gas towers, piers…) She explained her practice of seeing a place that is inspiring to her and drawing a reminder of the essence of this place in her sketchbook.  Although, she sometimes takes photographs, she says that most of her imagery is generated by the drawing because it was the place where she was able to catch her mood as well as the feeling of the location.  Her technique is very impressive and a strong teaching tool; however it is obvious that her work is beautiful because she creates strong images and designs. 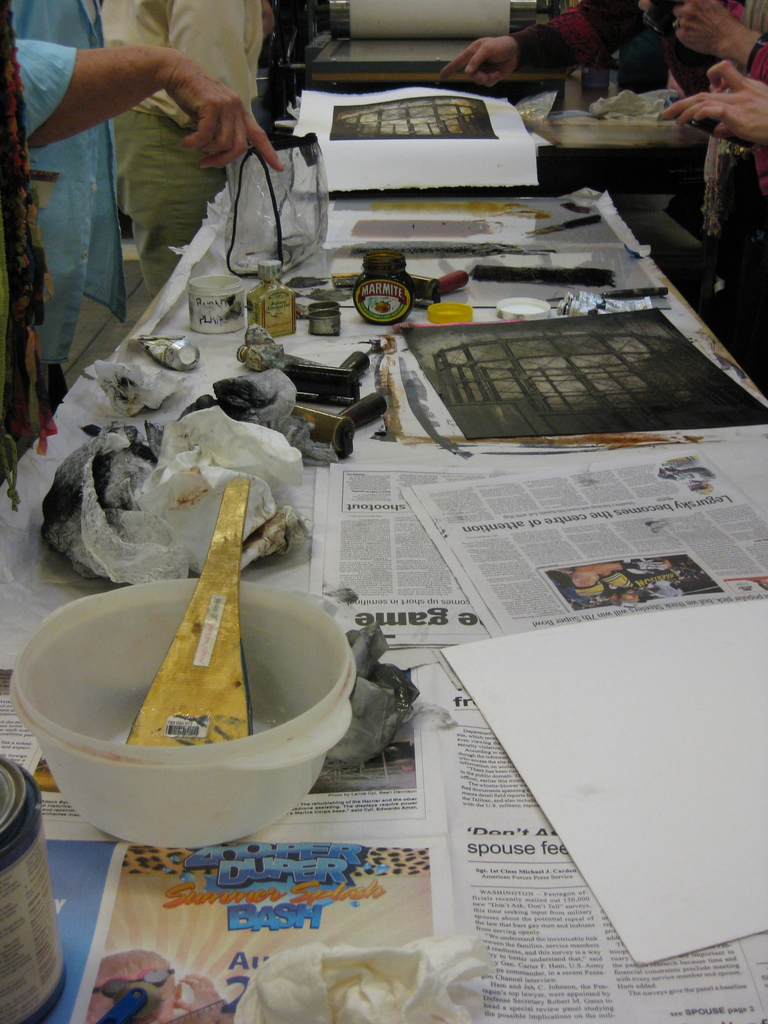 Personally, I felt so inspired by her demonstration.  I always take note of how a speaker presents their work, as I am learning what makes a good demonstration.  My favorite thing about watching Jenny’s demo is that she didn’t seem as rushed as I usually feel when I’m giving a demonstration in the classroom.  I know that the scenario is different, because I’m usually trying to give my students time to work.  However, Jenny’s sense of calm was new.  It appeared that she truly loved making and was happy continuing her work the way she normally would while she is in her studio.  She was very soft spoken, although very powerful to a crowd that adores a British accent.  She applied colored ink with a brayer with the same grace of a watercolor painter.  Every once and a while, she would flick drips of mineral spirits on the Plexiglas plate to create the mystical aura that her prints suggest.  In other words, her demonstration felt like a dance.  She was truly invested in the work that was before her. 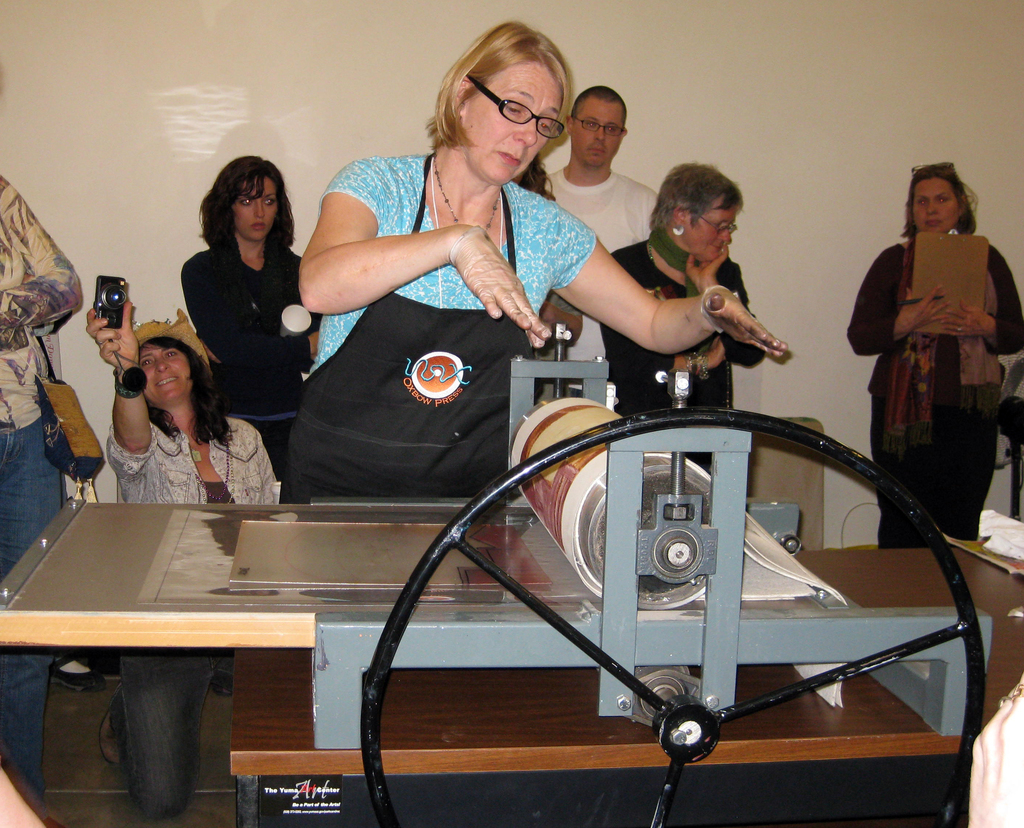 After her assistant helped her load the paper and press the first couple of layers of color, she registered the dry point image to include the strong line work that gives the work punch.  As she rolled the work through and pulled back the paper, the crowd (yeah, lots of people were around for this one) replied with “OOOOOHHH, AWWWWW.” 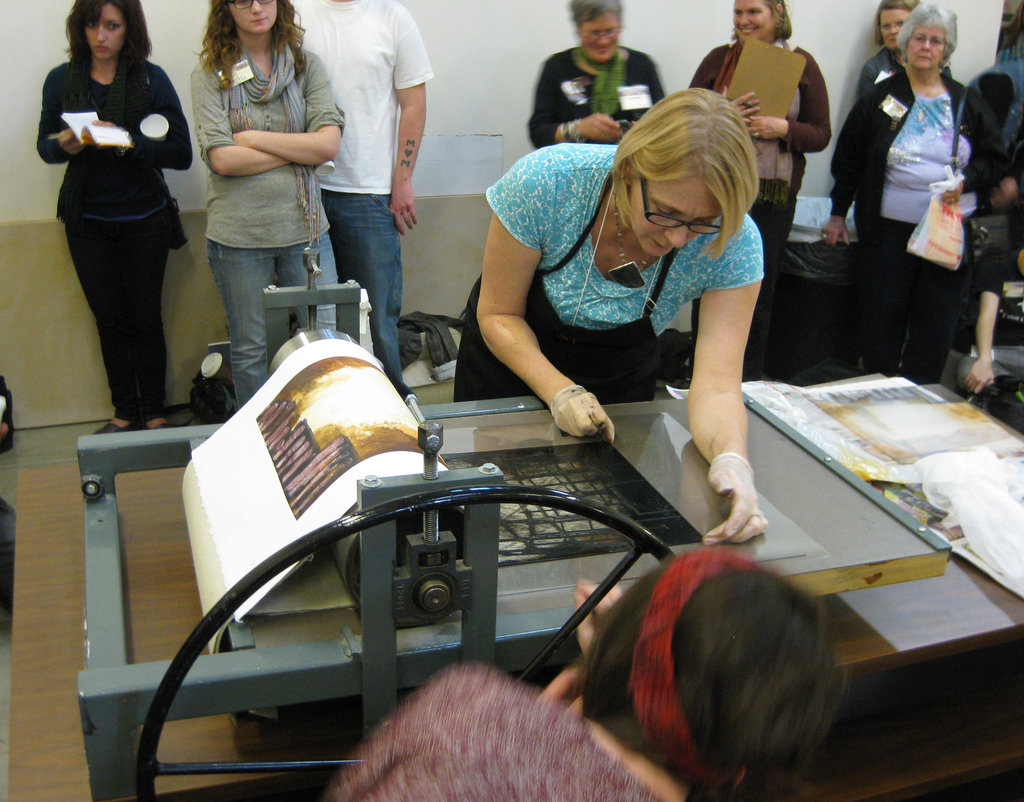 She donated the print to the auction that occurred on Friday evening.   The money goes toward student scholarships. 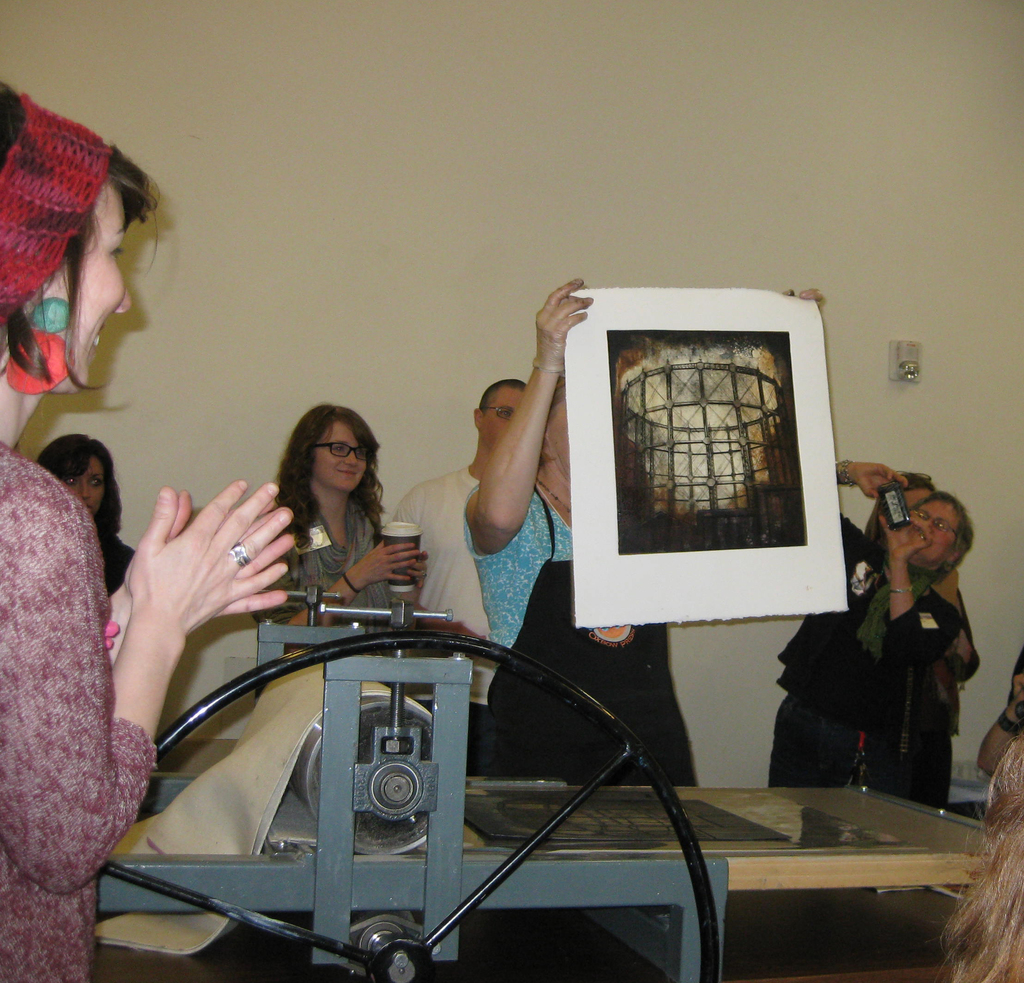 By the way, that student assistant the prepared the wet paper for the print, she was given a full scholarship that waives the registration fee while giving her the opportunity to assist this strong artist.  This student support is just one more thing that is beautiful about Yuma.  If you’d like to see more about Jenny Robinson, view her website.  You’ll love her work. 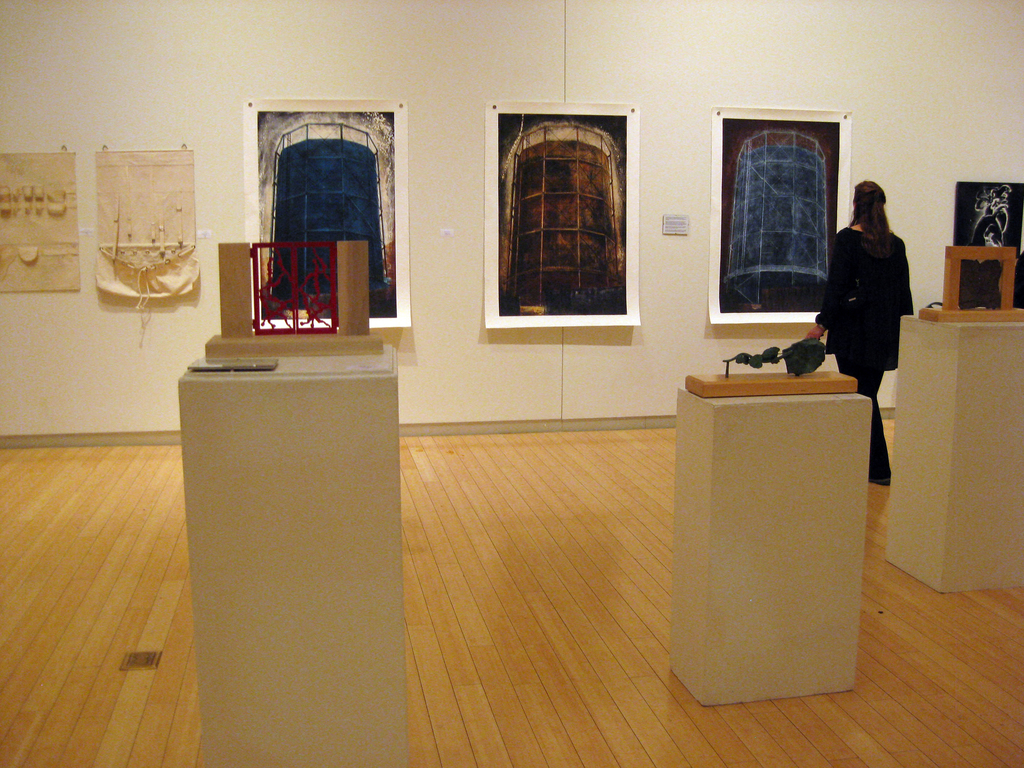 On Friday night, February 25th, the Yuma Art Center housed multiple art exhibitions that open to the public at 5:00.  This is also where artists donate work for auction every year to fund the student scholarships.  This year, the exhibition included a space that displayed all of the presenters’ artwork, a special installation by James Thurman, a student exhibition, and finally the silent auction. 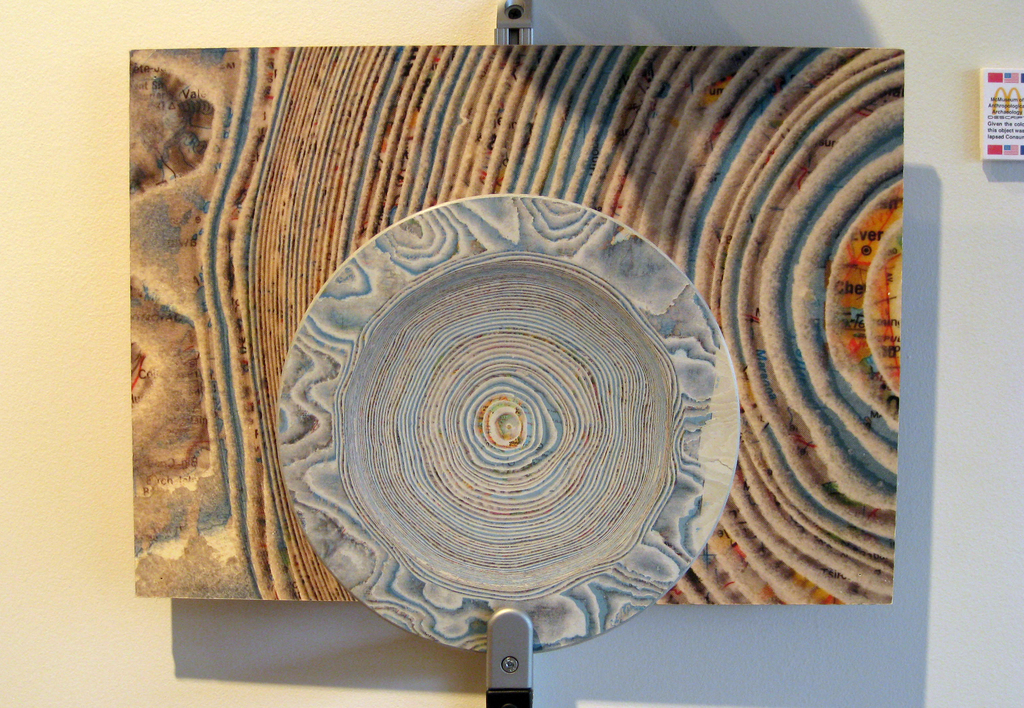 Music and appetizers are provided. This is a wonderful night to view the work of featured artists as well as see the work of the up and coming student/artists that have come from all over the nation to attend the conference.  I remember exhibiting in this show and having dialogue with the metalworkers who I admired.  This is a great way for the community of artists to continue to grow. 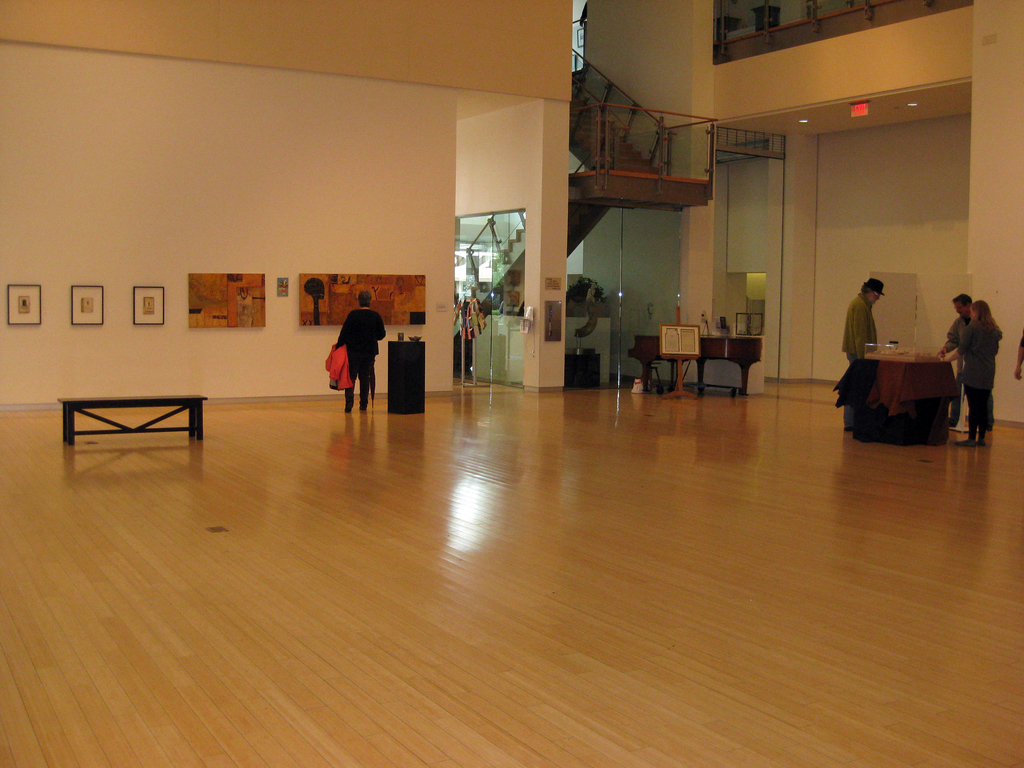