[Part One of Four]

What makes a contemporary jewelry exhibition successful?  The most common answers might relate to the amount of sales, a positive reception of work, or how well an exhibition is attended.    Unfortunately, relying on such quantitative indicators of success is shortsighted and overlooks potential long-term success.  It is vital for us to not only introduce new individuals to the field, but to expand our presence in contemporary culture. While each exhibition of jewelry occurs within the field at large, they exist as isolated events, and it is still possible—in the broader scope—for independently succeeding exhibitions to collectively fail.

Over time, I’ve come to think we have three distinct audiences: internal, external and hyperexternal. Two of which we regularly engage and one that is largely neglected.  Exhibitions that engage the internal audience are a type of communication within the field, disseminating and broadcasting current states of interest and accomplishment, e.g. thesis shows, work and lectures presented during gatherings of jewelers, and guild/organizational activity.  We engage the external audience through the presentation of work in established venues to a predictable audience, e.g. typical gallery and museum exhibition, artists’ websites, trade fairs.  The hyperexternal audience is unpredictable and ignorant of the field, they must be engaged through exhibition occurring outside the traditional jewelry context, events that could be considered a spectacle or happening. 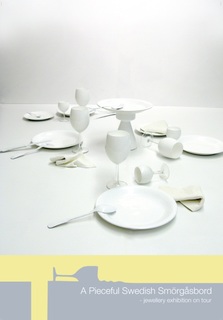 One way we can engage the hyperexternal audience is through sociopolitical context.  In Munich last March, I had the pleasure of experiencing A Pieceful Swedish Smörgåsbord, as well as getting to meet the Swedes who envisioned it—Sanna Svedestedt and Karin Roy Andersson.

Karin and Sanna conceived the Smörgåsbord after working together in Spain last spring and, in Karin’s words, being “surprised by the image the people there seemed to have of Sweden and of Swedish people—a mix of the myth that we are tall, blonde, rich, and beautiful, and the recent news about the abuse of women, suicides and—with the reports of Julian Assange—something that appears to be a corrupt legal system.”

Together they chose to project their own image of Sweden and chose to invite additional jewelers who share a similar background—young, fresh out of school, and female.  The curatorial decision was made on the grounds that their intention as Karin put it,
“wasn’t to show the truth—just to communicate our view.”

“The Swedish Rat: tall, dashing, blond hair and blue-eyed. There is long list of clichés regarding Swedish women. But is this really what Swedish women look like? Most Swedish women are not real blonds. Many women bleach their hair and the most common hair colour in Sweden is ‘The rat colour’. It’s a greyish brown colour, also referred to as cendré or dark-blond. In the English language there are two ways of describing this hair colour, ‘mousy-blond’ and ‘dirty-blond.’ Being able to joke about yourself and honesty are two Swedish attributes that I am proud of.  Comparing your hair colour to a rat is about as honest as you can be.” Sanna and Karin approached the Schwedische kirche (Swedish Church) in Munich to host the exhibition tio accomplish another one of their goals—“to introduce jewellery to people who hadn’t been in contact with it in this way before”.  They enjoyed seeing the reactions of the church members to the work and also cooperating with them in preparation of the exhibition.  The audience was invited “to the table” not only through the context of a projected contemporary Swedish identity, but also by occupying a (co-opted) space where the jewelry itself exists as a foreign body and commands attention.  Each artist’s viewpoint is offered for consumption in great contrast to the sterile whitewash of the table setting, while the Schwedische kirche casts its shadow onto the work as well.  It is not hard to imagine some sort of ritual—in the context of communion or even the last supper—where the offering is instead a piece of their collective Swedish identity.

A Pieceful Swedish Smörgåsbord will be exhibited again in Umeå, Sweden at the end of October.

For more info, images, and to keep up with Sanna and Karin, visit their blog on Klimt02: Diagonal

What a clever idea behind the blond hair blue eyed rat. Another common description for this hair color, among my favorite, besides mousy-blond-brown, is dishwasher blond...

I enjoyed this post, the success of an exhibit resides in the ability to understand or question the subject matter, not how much is sold or at what price.