Akio Takamori in the Flesh

I attended a slide lecture by Akio Takamori at the Austin Museum of Art a couple of weeks ago, and it was really inspiring. The lecture was part of Takamori's residency at the museum's Laguna Gloria Art School--a new program for them. I also sat in on his workshop on Sunday morning, so got to see him at work after hearing about his thought process. What a treat! Akio's work has always been figurative, but I was more familiar with his early vessels. He is still involved with vessel forms, 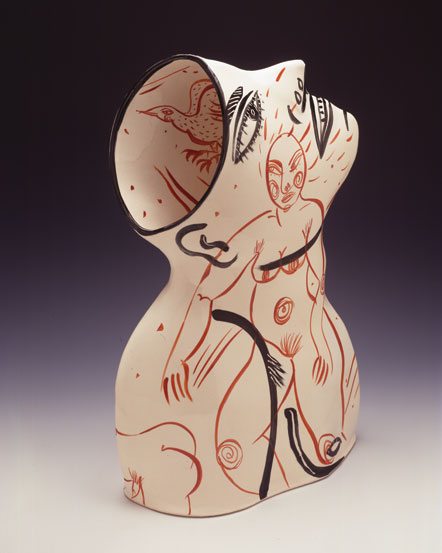 but the lecture focused on the series of life-size figures he has created for a number of exhibitions in the last ten years or so.

Akio Takamori was born in 1950 in Nobeoka, Miyazaki, Japan. While working as an apprentice in a production pottery in Japan, he met ceramicist Ken Ferguson, who became a lifelong friend.  He moved to the U.S. in 1974 to attend the  Kansas City Art Institute, receiving  his BFA there in 1976 and an MFA from Alfred University in New York in 1978. Since 1993 he has been a faculty member in the University of Washington School of Art. Working for years in a variety of media, he has incorporated drawings, lithos, and photographs in the most recent exhibitions.

Much of Takamori's work is an exploration one's place in the world, how one sees oneself and how others see him, particularly across cultures. Seemingly very comfortable in his own skin, Akio said he finds self-consciousness "uncomfortable, but also stimulating", and the recent exhibitions have played with the roles of viewer and viewed in different ways.

In "Sleepers", all the figures were placed on tatami mats, and all were asleep. Akio said audiences were at once more respectful because a sleeping figure is so vulnerable, and freer to look, since the figure didn't look back. Most recently, figures are paired with photographs and prints of themselves, sometimes viewing each other and sometimes avoiding each other's gaze. 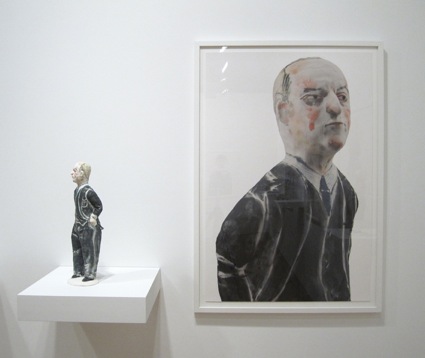 Seeing Akio at the workshop after hearing him talk about his process was eye-opening. He works in a buff stoneware and paints with underglazes and stains, and the pieces are usually fired several times, three on average. Akio rarely uses glazes, so there is no shininess to deflect the viewer away from the surface. Instead you are drawn into his fascinating world of reflection.

Thanks to Austin ceramicist Ginger Geyer for the workshop photo. http://www.gingergeyer.com/artist_links/index.html

Permalink Reply by Renee Rouillier on November 2, 2010 at 9:26am
Thanks for sharing this. I have always been an admirer of Takamori's work and its interesting to learn more about his process and thoughts. What a wonderful idea, putting photographs of the images in opposing views.

Permalink Reply by Margaret Henkels on November 4, 2010 at 8:33am
Isn't the pairing of the images and the pieces amazing. In one series the figures were looking at their own images, with the backs to "the audience".

Permalink Reply by Brigitte Martin on November 2, 2010 at 9:35am
Thank you so very much for the blog post. This is amazing !

Permalink Reply by Margaret Henkels on November 4, 2010 at 8:31am
Hi Brigitte,
So glad you enjoyed it. BTW now that we're up and running, I've told a few friends outside crafthaus about the blog, and they tell me you have to be a crafthaus member to view it. Can they join the group if they are not ch members (and not crafts artists)?
Margaret

Permalink Reply by Brigitte Martin on November 4, 2010 at 9:13am
Hello Margaret:

Thanks for spreading the word about your ceramics group !! That's terrific.

I just checked your settings for the group and the good news is that you did not set up any "privacy settings" which means in plain English that everyone with internet access should really be able to view your group and read all the postings you have even if they are not members. crafthaus is a public forum. Please let me know what happens on their end when they try to read your postings, so that I am able to better understand the situation.

Now in order to communicate, interact or join any group on ch, your friends would indeed have to become actual crafthaus members as membership is the gateway to participation of any kind.

There is the possibility to join as a "collector" and pay the annual fee, if your friends would like to do that, of course, that would be fine. In that case, I would need a list of their names, please, otherwise, if the application does not indicate an obvious connection to our field, it will not go through. This is a safeguarding measure for the benefit of all crafthaus members, and a necessity in any public forum.