This is the second Artist Spotlight that will feature artists participating in the Invisible:VisAble exhibition. Every couple of weeks I will introduce you to one of the participants, give a little information about them, and include some insights they provide me with about their art, challenge(s), what they are working on...I have left it up to the artists what they would like to include! Please do leave comments; we would love to hear what you have to offer! The creation of works for this exhibition has been an impetus in moving positively forward as Linda recovers, and has helped her navigate the path to accepting her new reality. You can see more of Linda's work at http://bletheringcrafts.blogspot.com/2011/05/linda-wallace.html

"My first brain surgery, in 2006, was to remove a tumor pressing on the optic nerve and causing holes in my vision.  It went well, with a few minor glitches, and my vision was restored to its previous astigmatic glory. All was good, until a routine MRI found a new tumor in the same area. And so began a process that took me through: very invasive brain surgery with part of my skull dismantled and put back together with tungsten straps, six weeks of stereotactic radiation, shingles on my scalp during the radiation treatments, which led to disseminated zoster (the shingles virus throughout my system, including my cerebrospinal fluid….and, therefore….in my brain).

The medical world is content with the results of the treatment, despite the damage. And, I’m okay with that. I’m alive, I can function, I can see….and I am steadily reintegrating myself with my creativity and with the making of my art.

The initial difficulties were huge.  I was lost in a miasmic brain fog and felt a bit like an untethered balloon, drifting, bouncing, getting tangled up. 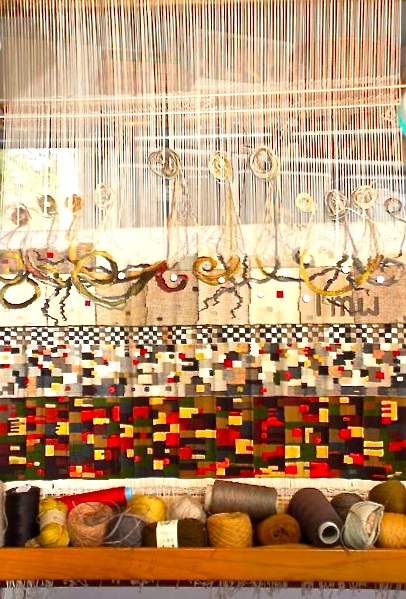 Reading was physically and intellectually challenging.  I couldn’t drive. Speech was difficult:  My mouth/tongue/teeth were clumsy in forming and speaking the words, and the language itself was somehow lost.  I would have the ‘sense’ of what I wanted to communicate, but the words wouldn’t come to me.  It was easier to communicate digitally because the process is a bit slower, and the pauses needed to find the right word were not noticeable.

My sense of balance was damaged, as well as the peripheral vision in both eyes.

My understanding of spatial concepts was damaged.  My manual dexterity is affected by it, as was the ability to translate directions into the appropriate physical act.  It was also difficult (impossible, at first), to comprehend how to translate what was in my mind’s eye, through my hands and onto drawing paper or warp threads.  Initially, I could no longer understand ‘how’ to calculate the number of warp threads I would need, ‘how’ to wind off an appropriate length of warp or put the warp onto the loom.  The simple actions of ‘one thread forward, one thread back’ and ‘over one, under one’ were confusing and physically difficult.

During my convalescence I was introduced to the new understanding of neural plasticity and decided I would resist the urge to drift and accept. Instead, I resolved to work toward helping my brain and body either restore previous ability or adapt to the changes.  I also made the decision to work my way back to being an artist, to weaving tapestry, to drawing.  It’s been three years. The large tapestry (32” wide x 48” high) was begun nearly two years ago.  The initial warping took me weeks, with friends coming over to straighten out my mistakes, and me getting tangled up again.  Once the loom was warped and the warp spaced and tensioned, I had to face the reality that what had once been an automatic, muscle memory was now a laborious process of weaving one warp at a time, making mistakes, going back, starting over.

Eventually, I was ready to try to weave tapestry again.  The first six inches were created as a spontaneously directed exploration of rectilinear shapes.  Using strong colours and feeling my way, I began to relearn what I’d lost.  Then, those six inches sat there while I tried to decide what to do next.  I drew possible cartoons created imagery, but couldn’t get it ‘right’.  My work has always been conceptually driven, but I wasn’t researching. Eventually, suddenly, I comprehended the reality.  Weaving those six inches was the beginning of my journey toward a restored self. As in all good journeys, I didn’t know where it would take me but I knew I had to go.  That day, I sat at my drawing table and sketched the imagery for the central portion of the tapestry:  instead of creating a symbolic narrative representing an intellectual response to conceptual ideologies I created the symbolic narrative of what it felt like inside of ME.  The new ME. The imagery even managed to capture what my post-surgical vision feels like.  To ME. I’ve learned many things on this journey back.  Rather than be intimidated by the possibility of embarrassment (mine or the people I’m talking to), I’m honest and matter of fact about my sudden lapses of memory, my diction that can be a bit slurry, my search for words.  I explain, and repeatedly ask people to remind me of their names.  Yoga has increased my strength of body and given me an easiness of soul. Plus, my new core muscles and active feet and ankles prevent me from falling over.

People tell me I’m strong.  I am.  Prior to the start of this journey, I didn’t know that.  My new self may have disabilities, compared with my earlier version of self, but I’m growing to truly like and accept who I have become."

This sounds like a difficult journey. I wonder how your family helped you in your recovery and how you dealt with the obstacles emotionally. (No need to answer if the question is to personal or difficult.)

Also can't help but wonder if the work would feel even more powerful if it was a little messy. As it is now it looks very neat and tidy, obviously from a great effort on your part.  With all that this work portrays,  I wouldn't mind seeing more of the tangle not just in the imagery, but also in the technical aspect of the weaving.