I've added all the little painted details that make these better. Half are stewing in their own juices nearly completed, the other half are waiting for more paint. I can only do so many hours of tiny stippling and stripes before I lose my marbles. Being freakishly nearsighted may have something to do with my surface tendencies. I hope you're all out there rushing to finish the way I am. Our Flickr group for sharing in-progress Swap Pins is growing by the way! I've had to employ both sides of my rigged up goo wall to get things in order. It was too packed and out of control before. I don't know if I'll ever work on this many pieces for the Pin Swap again, but it's been fun to go all out at least once. I've also stumbled onto some patterns and color combinations that will be making an appearance in other work as soon as I get around to that.

Did I mention that somebody's going to be grounded if they don't clean their bench before SNAG... 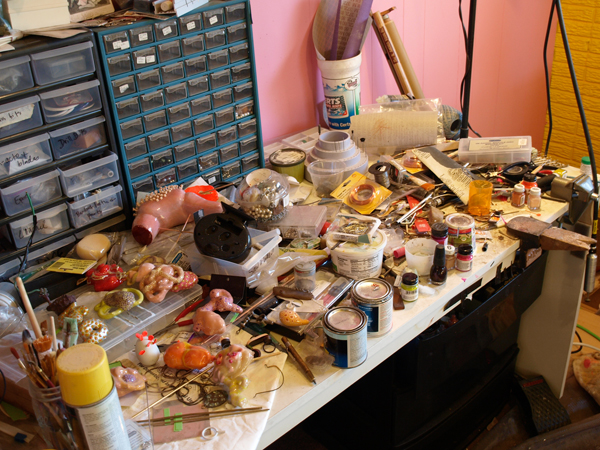 It's just gotten downright ridiculous this week. Between the Swap Pins and a commission along with the two pieces I'm hoping to bring with me to the conference I've hit a new personal low.

It is nearly unfathomable to think that the conference is two weeks away! And I've got less than that to finish everything as I've planned to mail the pins as well as work I plan to wear. What with all the pins, nails, tacks and staples that are embedded in them I don't foresee myself making it through the airport scanners without a lot of explaining to do.

Rebecca Skeels commented on Rebecca Skeels's group The Association for Contemporary Jewellery
"ACJ has launched a new webshop here. You can purchase the Connections | Connessioni exhibition catalogue, paper & PDF copies of the latest issue of Findings and the Marjan Unger book "Jewellery in Context - A multi-disciplinary framework…"
yesterday

Rebecca Skeels commented on Rebecca Skeels's group The Association for Contemporary Jewellery
"Call for entries for the ACJ 2020 exhibition Glasshouses. The exhibition will be hosted by the Vittoria Street Gallery at the School of Jewellery in Birmingham, in September & October. More details…"
yesterday

Rebecca Skeels commented on Rebecca Skeels's group The Association for Contemporary Jewellery
"Connected to the Connections exhibition there will be a special one-day jesmonite course on 5 March at the City of Glasgow College. Cost £60 including materials. The course is nearly full so email projects@acj.org.uk soon to book your place…"
yesterday

Rebecca Skeels commented on Rebecca Skeels's group The Association for Contemporary Jewellery
"Connections Connessioni special opening event on the 19th February. Anne Walker and Simone Nolden will be giving presentations about their work and practice. Tickets: £8 for ACJ members…"
yesterday