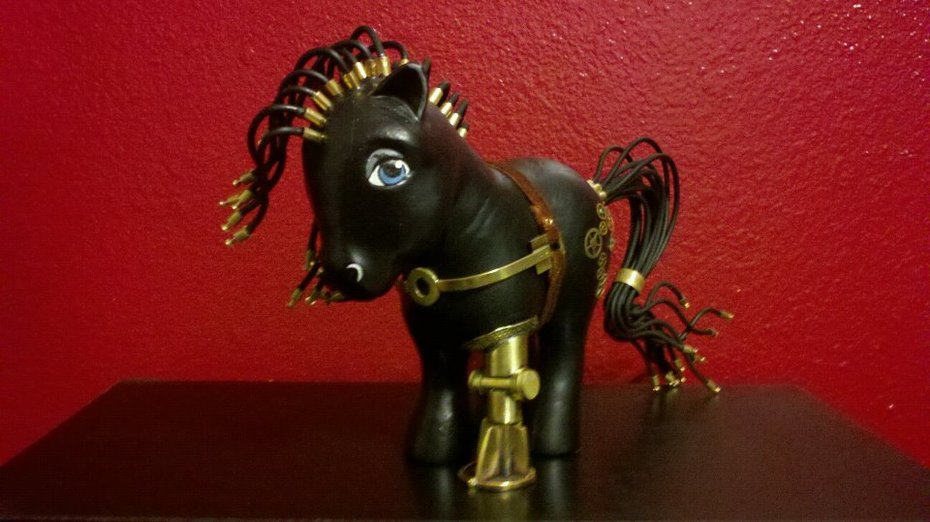 When the Care Bears were revived in 2007 there was no contact made with the estranged and embittered Care Bear Cousins who resided in the Forest of Feelings. This was not well received. While confined to the Forest, the Cousins were forced to feel and re-feel the sting of this betrayal and were growing ever more resentful of the success of other cute creatures such as the My Little Ponies which are still more coveted than any other 80's icon. Everything changed when the Care Cousins were visited by Grumpy Bear. No longer satisfied with just being grumpy he had succumbed to his darkness and become Hateful Bear. Together they formed a plan to find a new home where they could flourish and become more famous than any other creature, but this time they would take it by force.

Just over the rainbow lay the sleepy realm of Pony Land. Early one morning while all the Ponies lay sleeping, a entire battalion of Care Bear Cousins marched across a field that would soon be blackened by battle. None could have known that the Cousins had harnessed they powers of the dark magic know as Smooze and planned to eradicate the ponies once and for all!

"The Battle of Care Bear Aggression" began as the Cousins joined hands and initiated the Care Bear countdown. They struck in a surprise attack with "The Care Bear stare heard round the world". Many were killed in the first wave, but there were those who resisted. The Ponies called all allies to their cause but they simply were not prepared for the threat the Dark Bears posed. Battle raged for three days and nights before the last of the Care Bear Cousins were smote upon the hillside and the Ponies surveyed the damage. Many were lost, countless more wounded but none so gravely as Minty. Time and time again she dove into the thickest parts of battle to strike back or rescue smaller and weaker Ponies from harm. Indeed her shining example gave courage to all around her and was pivotal in the eventual victory for ponies everywhere. As the sun rose on the fourth day her strength was failing and the Smooze had almost overtaken her.

The Ponies would not stand idly by and watch the " Hero of Pony Land" succumb to her wounds. They contacted famous inventor and long time friend Tim "Axel" Nelson of Reaction Designs to save her. Combining the very latest in prosthetic enhancement, skin grafting and hydraulic pressure conversion, not only did he manage to save her from the Smooze but he made her stronger, faster, better than she was. She runs faster, jumps higher, and can carry more weight than any Pony ever has. She still stands guard over Pony Land Castle, ever vigilant in case any other creatures dare to challenge the might of the Ponies.

This is a one of a kind sculpture that was hand fabricated from the body of Minty, a 1st generation My Little Pony from 1982. She was completely repainted, given a new mane and tail, battle harness and a powerful prosthetic hoof with a fully functional knee joint. After the procedure she adopted the clockwork symbol as her tattoo in gratitude to Admiral Nelson for saving her life.