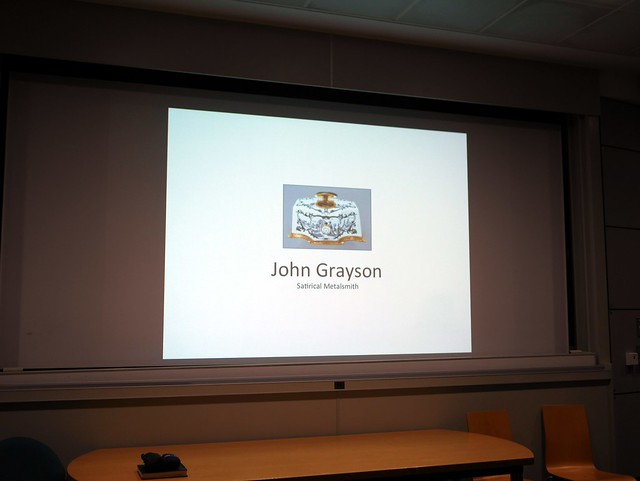 Kicking things off was the ever-lovely John Grayson, the self-described "Satirical Metalsmith" who, inspired by the satirical bent of the artists he was reasearching for his PhD - all about fine painted enamels from the Georgian era - has become a saritist himself, using the same medium but applied to automata. 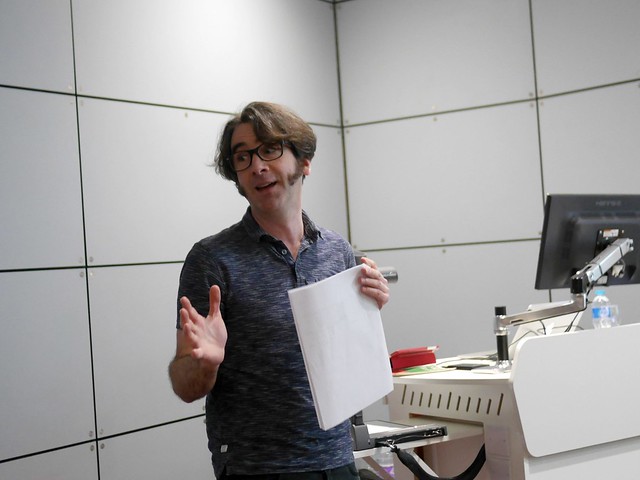 You may recall that I met John just after I moved to Birmingham, when he brought his "#Chatterama" over to the workshop for repair: 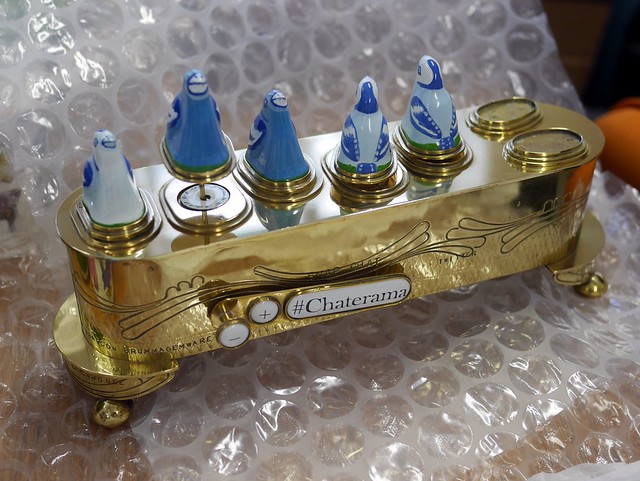 And that his work is also featured in "Made in the Middle", his take on "Brexit". Tonight's talk was all about his collaborative practice with a variety of students from non-arts backgrounds and how he engaged them in the practice of making. 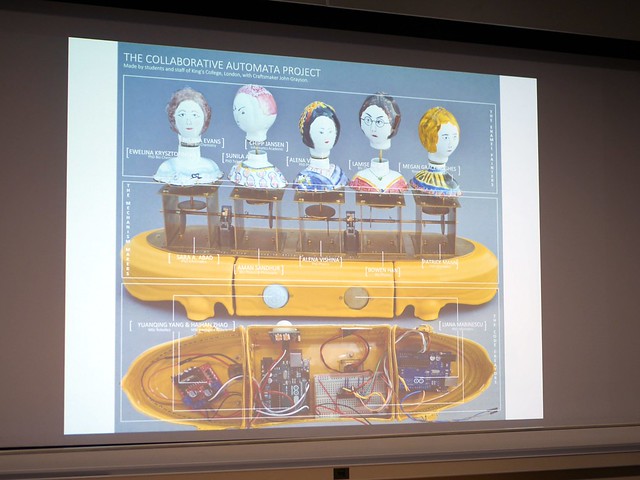 I rushed away from this to see an unusual and rare UK stage appearance of John Malkovich in "Just Call Me God: A Dictator’s Final Speech", a play by Michael Sturminger which casts Malkovich as the eponymous dictator on a set which is straight out of the worst Trump-Brexit nightmares: 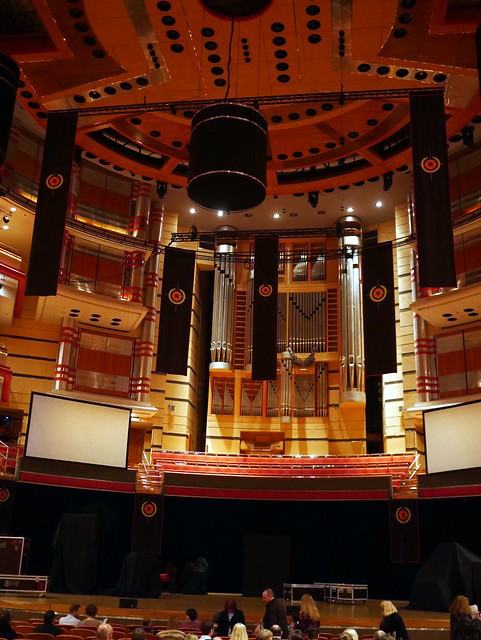 The play is not great: Malkovich, however, is. He is compelling from the moment he enters the stage and it is his presence alongside the formidable presence of the Symphony Hall organ which - sometimes electronically-altered - plays for much of the duration of the play.
Unfortunately, the text feels a little bit cliched, a bit hung up on tropes of mad dictators - perhaps they are all exactly the same - and the foil to Malkovich's character is a female journalist (Sophie von Kassel) who is given the most predictable responses to The Dictator's ever-more-outrageous declamations. Even the twist at the end felt laboured. 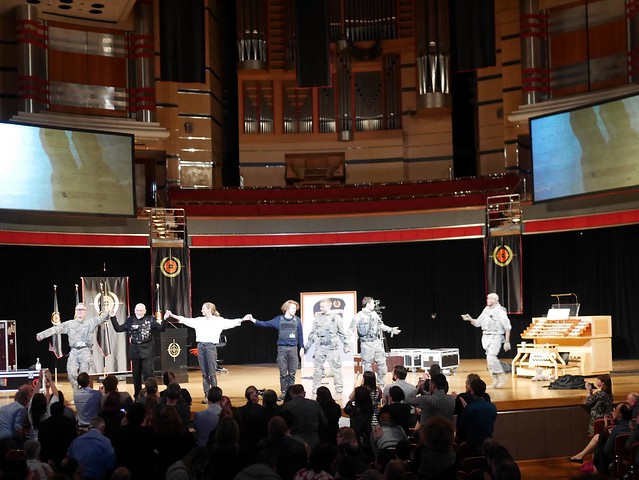 That is not to say that I didn't enjoy the piece: I most certainly did - the live electronics and video, Malkovich's electric performance and the phenomenal music all made it most enjoyable. It was more that after it was over, I didn't really feel as if there had been much substance to take away.

The "Made in the Middle" madness continues, this time with a "Meet the Maker" night at the School of Jewellery, organised by our irrepressible Zoe Robertson and Sian Hindle: 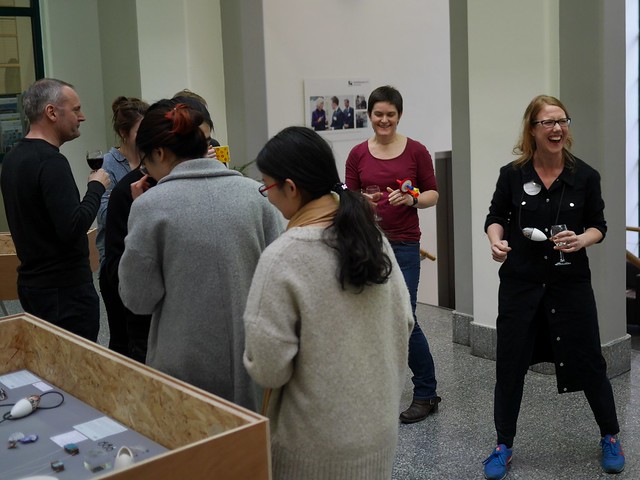 It was a bit like 'speed-dating' (without the risk of boredom or STIs) in that when the hooter sounded - you can see the wonderful hooter ring on Sian's finger in the photograph above - the audience would move to the next cabinet and the makers would each speak about their work for one minute. Some people just spoke: 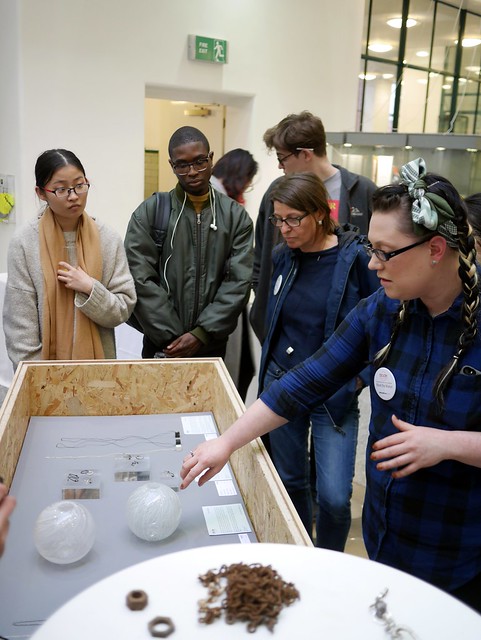 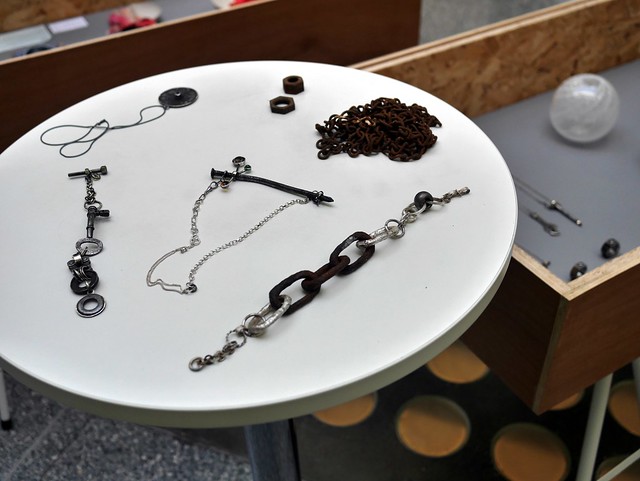 As I mentioned at the top of this post, I was in Brighton over the weekend but very specifically to go to London to march against the triggering of Article 50 which will see the UK embark on a two-year trip to isolation, global irrelevance and financial disaster, possibly even the break-up of the UK itself. I've written about the background to this and my opinion of it before here, so I am not going to go over that. Suffice to say that as things change around the world, the decision by an unelected prime-minister to do the "will" of less than half the electorate looks even more idiotic than it did on the 24th June 2016.

So Dingo and I went on a march! Along with around 100000 other people who feel the way we do. And guess what: the UK media ignored it. It was, of course, widely reported around Europe but the unholy alliance between the government and the UK media - which is broadly controlled by corrupt billionaires who want to turn the UK into some sort of sub-Singaporean tax-haven - meant that it wasn't reported in anything but passing. But it happened. And it was really good fun. 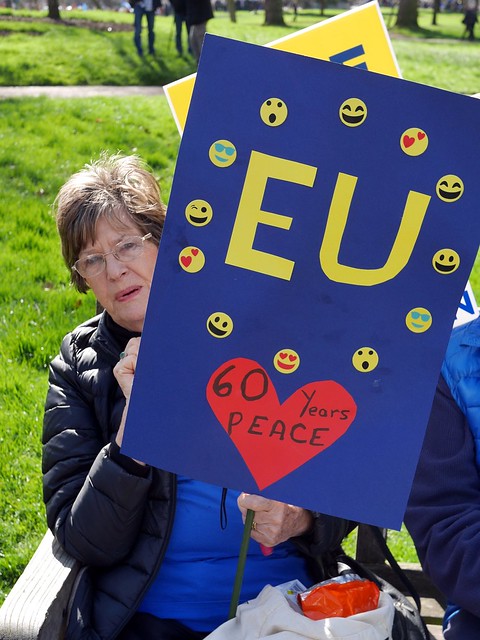 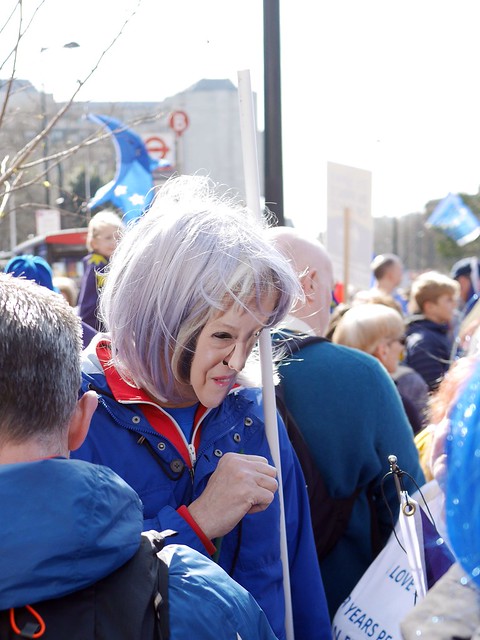 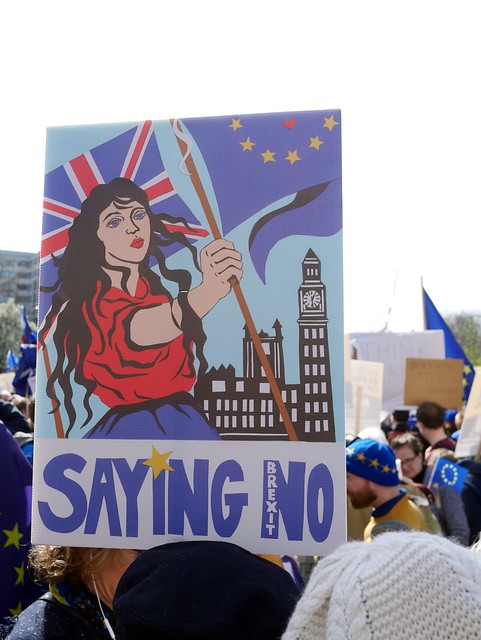 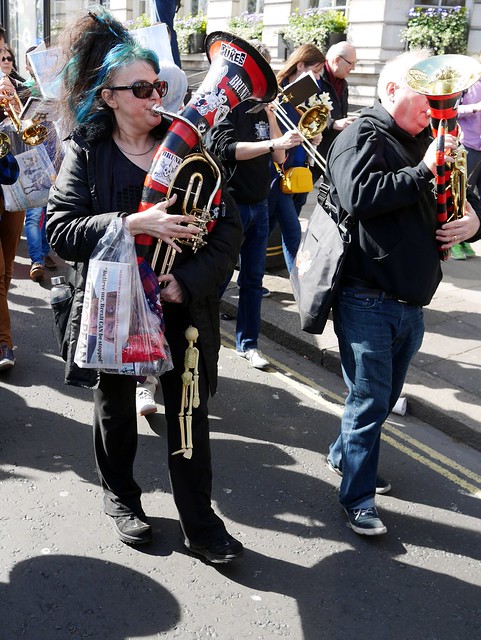 AND I got to wear some badges: 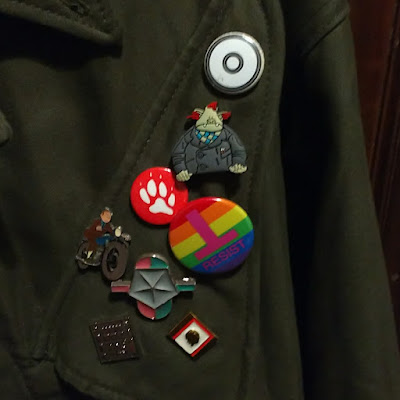 Which led to a discussion about badges with Kevin Gray: it turns out that Kevin and I had rather similar 1980s politics... 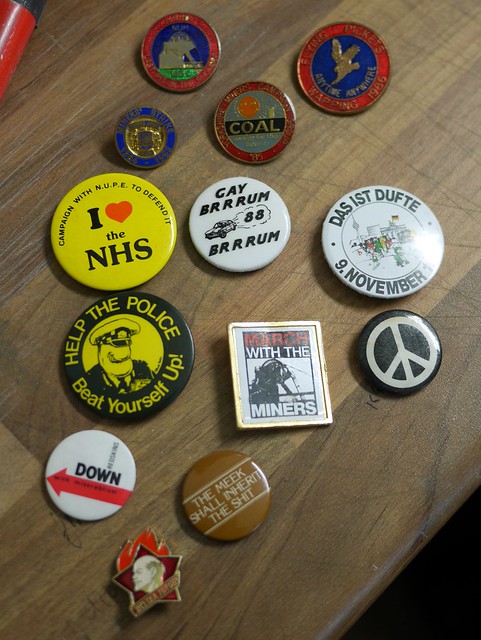 The students made me laugh a lot this week with their daft humour. First of all, the blob of brass from a failed casting which became the workshop cat: 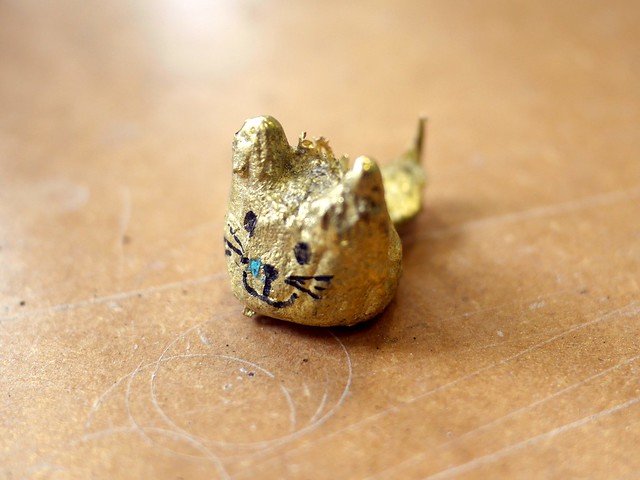 Then I found this "assessment tool" in the design studio, one which does make me wonder how they think I do their assessments! 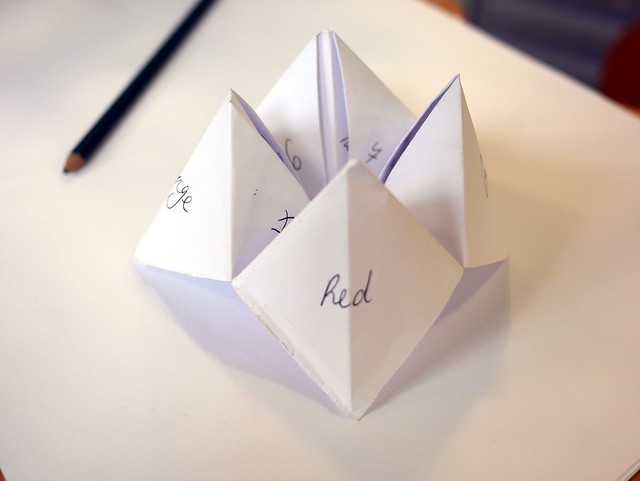 Which opens to reveal: 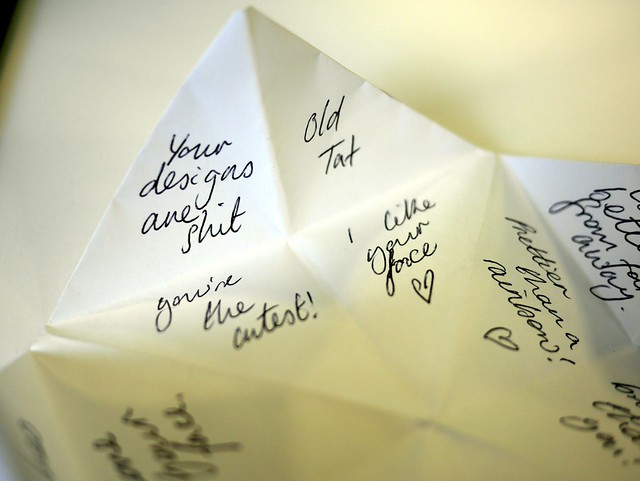 One of the musical highlights of the year so far was also this week when went to hear Rizwan Ali Khan and his brother, Muazzam with their band - Rizwan-Muazzam Qawwali Group -  perform Qawwali. I have to confess to knowing Qawwali only from recordings and even then, from the very popular recordings by Nusrat Fateh Ali Khan and his associates. I have never been to hear the music performed live and I have to say that I was absolutely blown away. 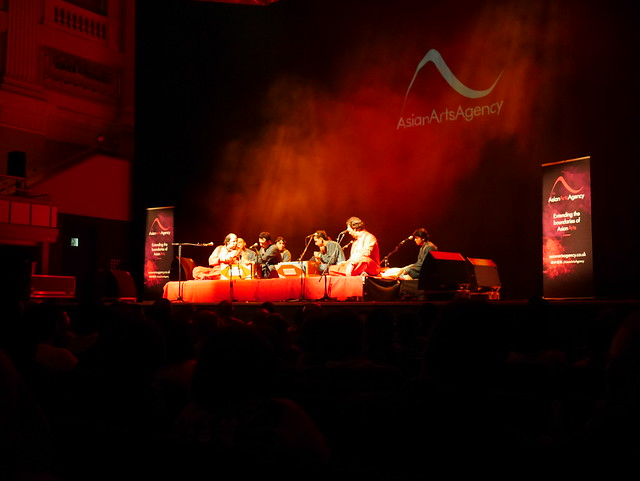 Qawwali is Sufi devotional music, rooted in a mystic strain of Islam and is rooted in ancient tradition. Rizwan and Muazzam have a band of nine players: the two brothers, two singers who also play box-accordion type instruments, four backing singers who also mark time with handclaps and one tabla player, all of whom proved to be capable of astonishing feats of musicianship.

This is not a music to listen to lightly - something which I have been guilty of in listening to recordings - and in the live context the thrill comes rather as it does in a jazz gig: from the assured grasp of daring improvisations and this was the revelation for me. I hadn't realised that this music is mostly improvised. As in jazz, subtle musical and physical signals send the improvisation around the group and the music becomes more and more impassioned and complex. I was grateful to find myself seated next to Kash, who explained some of the lyrical content to me as well as some of the background to the musicians and who, like myself, was delighted by the sheer rock-and-roll energy of it all: there is something of Hawkwind or Led Zeppelin about the extended song form - seven songs in 2.5 hours - and dazzling virtuosity (and there was even an extended drum solo on Tablas!). 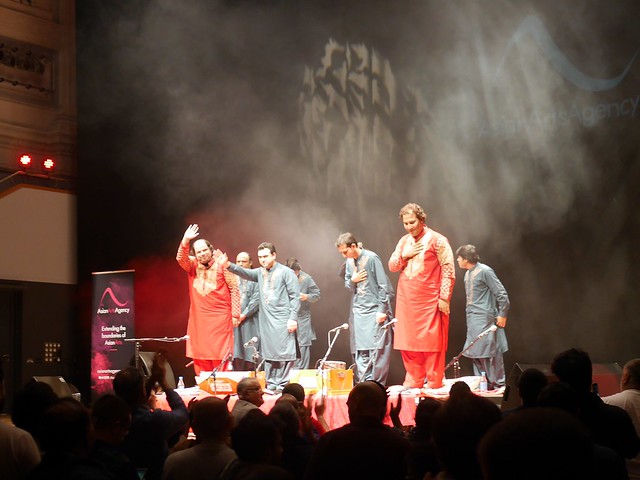 When it was all over, Kash mentioned that it was sad that lots of people now associate Islam with "knives and bombs".
I don't think I've ever seen anyone so despondent at a gig, especially not one so uplifting and exciting.

Be uplifted and excited: