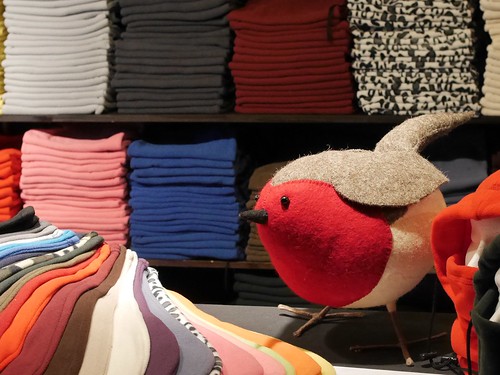 A busy week in the run up to the festive season.

Kicked off with the pleasing completion of a watch-chain for my friend and colleague, Simon Murphy. I've worked a lot with Simon over the year and his photographs of my work being worn have been important in getting it out to a wider audience. He already wears a bracelet I made for him ages ago: 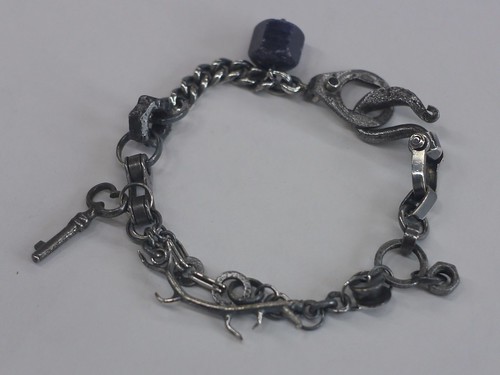 And I wanted the watch chain to reflect this but also to have something about his photography in it. I have a large collection of lenses and camera parts in the workshop, so put together a chain which has a detachable fob element consisting of a broken "magic lantern" slide behind a lens and a glass element from a camera: 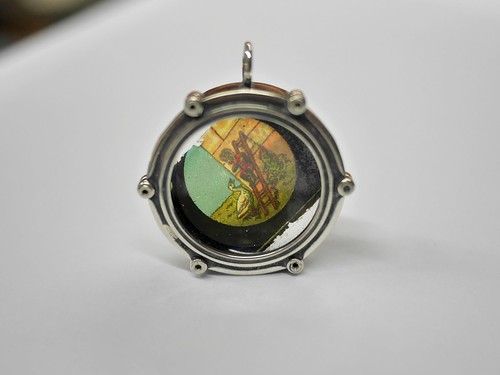 In classical "Double Albert" style, this is worn on the opposite side from the watch and is nearly always a decorative foil to the watch worn on the other. 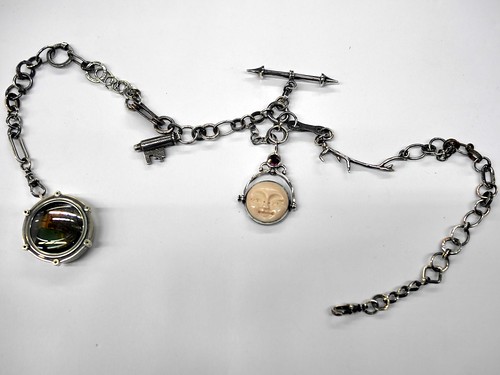 By removing the fob and swinging the chain over, it can be worn as a Single Albert.
The carved bone face in the middle of this is a classic swivel seal: 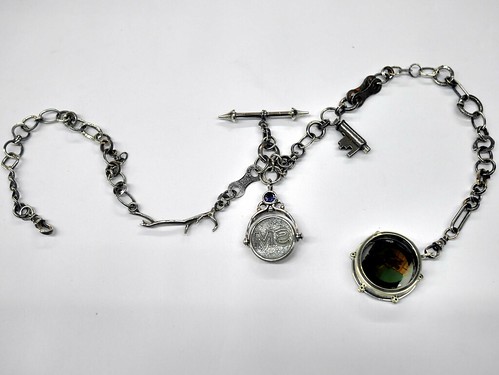 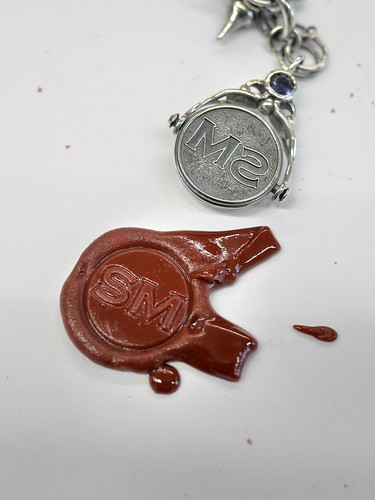 This week was also the week of the student Christmas sale and it was something of a bumper year, largely due to the fact that the product was - dare I say? - rather better than in previous years. I think that there was less work but of a much higher standard and which also managed to be both interesting and "commercial". 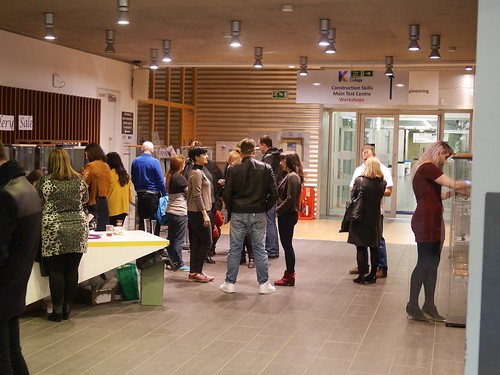 There was a good range of work, too, including smallworks and jewellery for men: 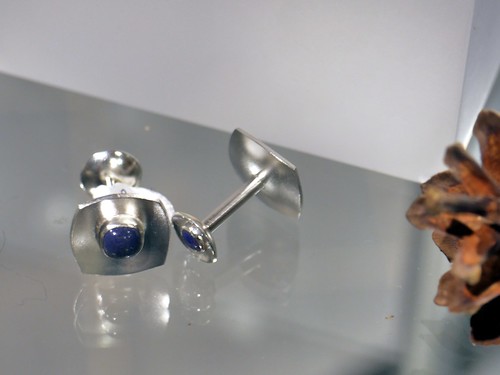 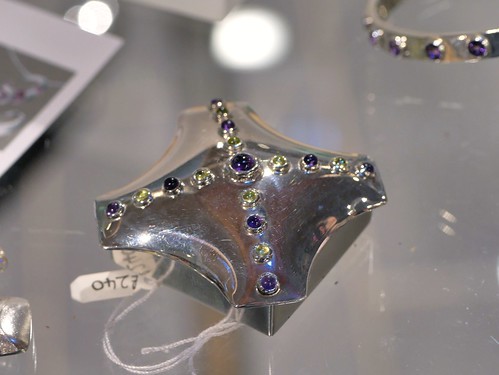 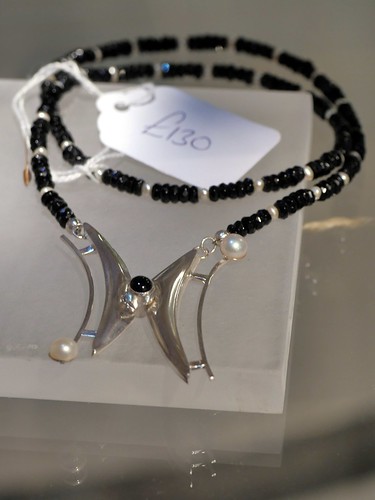 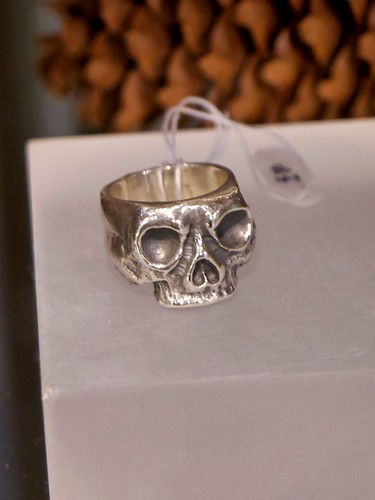 The sale travelled around Glasgow to the various campuses of the college, which was absolutely brilliant and surprisingly they took more on one day in one of the campuses with less activity than they did on the main campus over three days!

Off to Edinburgh for the "Limited Edition" show at Edinburgh College of Art. This is a brilliant project to introduce their third-year degree students to digital manufacture and involves them in having to produce and sell commercial product in conjunction with an external casting company and the third year graphic-design students who make the packaging.

Unfortunately, I was really remiss and didn't manage to get notes on the names of the people who showed us around or who made what. The ECA website doesn't help either, as there is no list of participants, which is sad as some of the work is lovely. 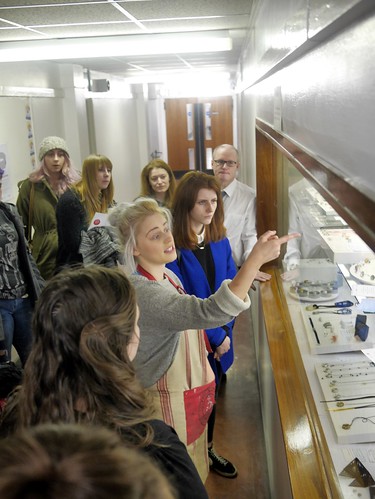 Some of the ECA students talking to my students about the works. 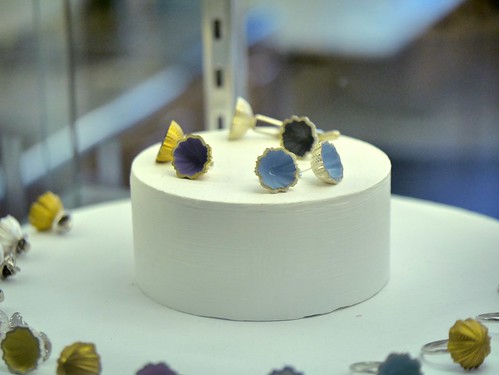 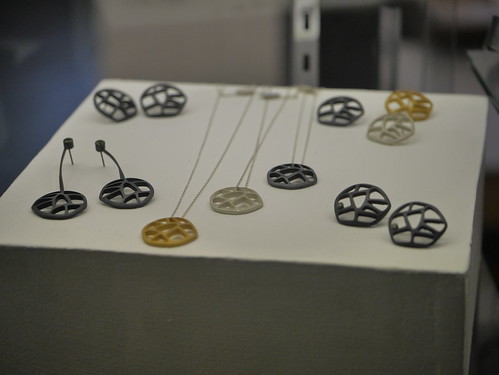 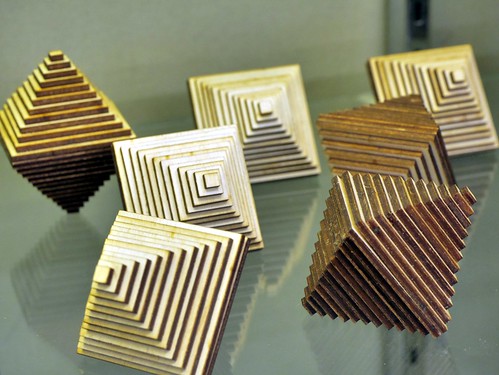 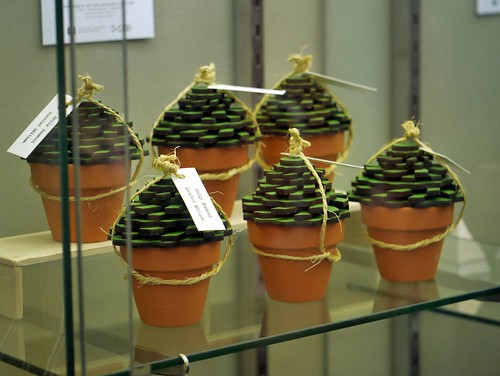 It makes me wish that we had a graphics design department to help with the packaging!
Although the show is over, it is still possible to catch it for one weekend at the National Museum of Scotland on the 13th and 14th of December.

We headed from there to Dovecot Studios to see their "Selected" show, a selling show of work by a variety of contemporary craftspeople around Scotland and it was lovely to see some of my "old favourites" (if I can be forgiven for calling people in their early 20s "old favourites"!) from the degree shows over the years now represented as serious makers, including new work by Emelie Westerlund: 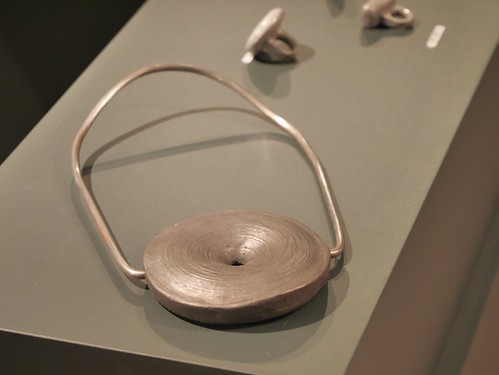 And classic work by Anaïs Paulard: 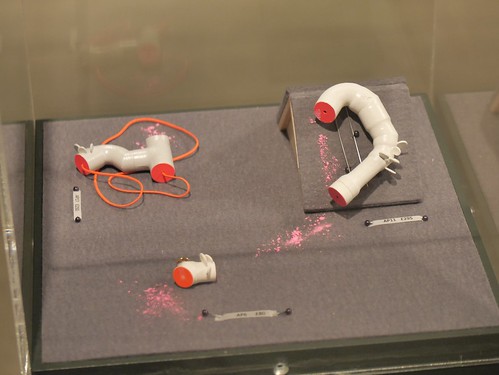 This is not just a jewellery show, but there are works in glass, ceramic and textiles. One of the particularly fine aspects of this show is that the viewer is invited to interact with some of the works and this is a departure to be encouraged. It is incredibly bold of Jessica Howarth to allow the viewer to actually handle her precious metal and enamel pieces, for example: 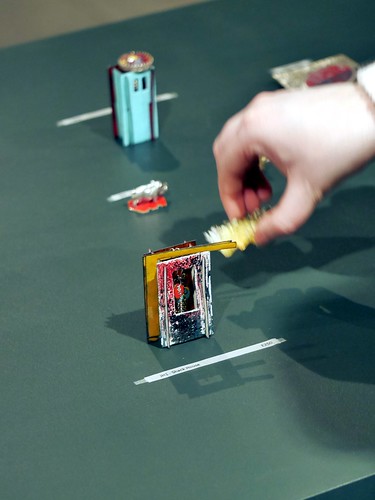 Some of the work really needs to be handled to be appreciated, such as the laser-cut neckpieces by Naomi McIntosh: 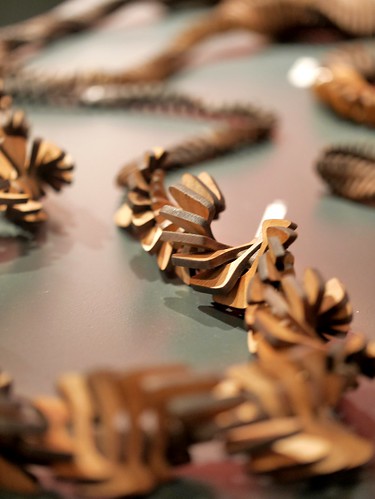 This week also brought me the unexpected invite to attend a fashion show celebrating the "Little Black Dress". Not something I would necessarily have chosen to go to but Mary McGowne of The Scottish Style Awards and The Vine PR company suggested that I might know someone who would like to go with me and I invited Janine along for a French Martini and a fashion show! 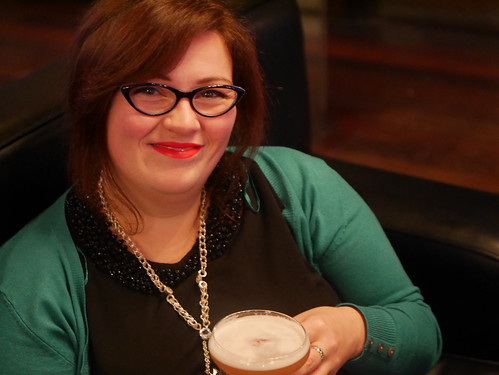 Needless to say, Betty and Bee were there in the form of their stylish selves and Sheri was looking quite the part as she sashayed down the catwalk to the bar... 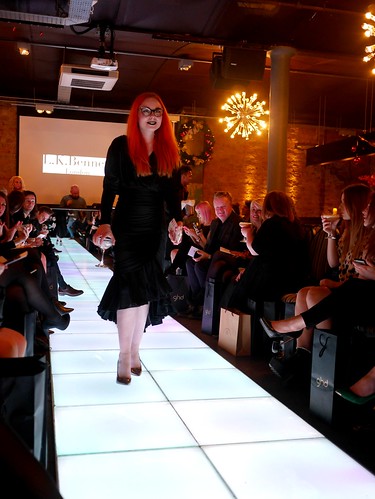 We genuinely thought her LBD was one of the best of the night!
(Yes, that is David Barbarossa in the DJ booth: more at the end of this post.) 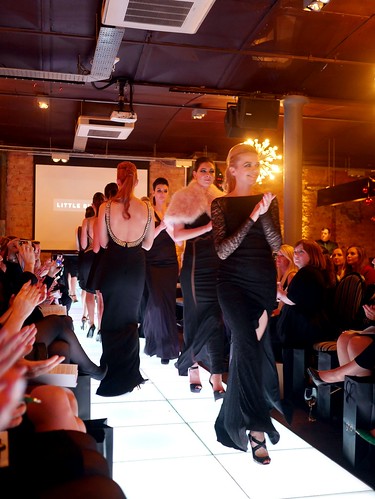 It is funny to think that just about 18 months ago, the world of "fashion" was a closed book to me, even though I knew a lot about it.

There is a slight hiatus in the workshop just now as I am waiting for the delivery of a batch of cufflinks from my caster, so I decided to start making a watch chain for myself, inspired by the one I made for Simon. I do wear a watch chain on my waistcoats but I made it many years ago and while it is not an ordinary chain by any means, it is not exactly inspired, nor does it reflect my more recent work: 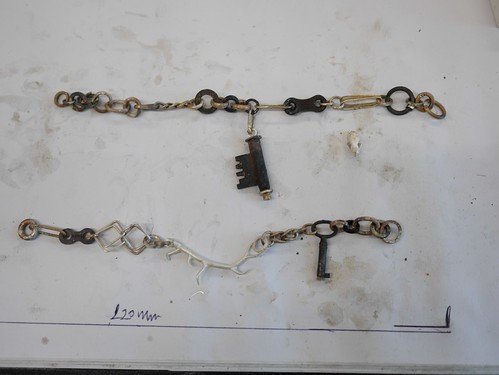 This, too, will have a swivel, a seal and some sort of a fob.

I had a night out in Edinburgh last night with my good friend, John. Our visit to the Christmas Market is an annual event and while we never buy anything at it, it is just good to walk about and see what is going on. 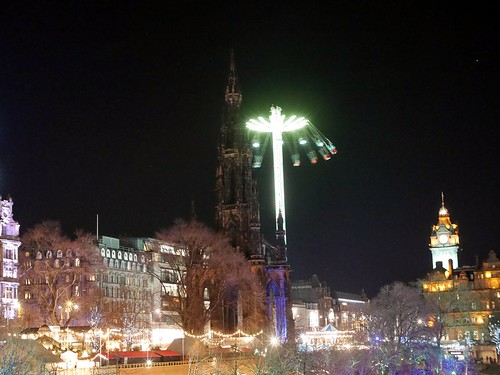 With any luck, the rest of the weekend will be quiet.

As mentioned above, David Barbarossa played at the fashion show on Thursday night and he opened his catwalk set with Moloko's "Pure Pleasure Seeker" which I love: the bass clarinet gives me goosbumps. It reminded me that I've not listened to Moloko for a long time and commented on this on Twitter, to which Mary replied that I should listen to Roisin Murphy's own album of Italian songs which came out earlier in the year. I hadn't heard of this at all and it is brilliant. Not only that, but Roisin has it on a Soundcloud page for you to enjoy.

And just because I can, here is not only "Pure Pleasure Seeker":

But also my absolute favourite song by her, "The Truth" with Handsome Boy Modelling School: