The Zeller Theater is attached to the Yuma Art Center, complete with art deco light fixtures, original concession stand and of course two hand-painted nude mermaid women at the front of the house. Originally built in 1911, it is a perfect example of the time traveling charm that the majority of the buildings in Yuma possess. The place was the first in Yuma to contain fixed seating and to have the ability to show motion pictures. Once the attendees settled into the seats and after a few well timed whistles Executive Director Neely Tomkins started off by asking the question “How many Yuma virgins do we have this year?”  With myself included, a little over one third of the audience raised their hands, and the room burst into a frenzy of whooping and clapping, the energy was infectious. After more quieting noises, some formalities and housekeeping announcements each of the presenters came on stage and gave a five-minute preview of their work and gave an outline of what they would be discussing in the coming days.  I felt this was a nice touch on the organizers part, since there is no set schedule when you register, you can literally go to any or all the presentations! All of the venues that were housing demos or talks were all well within walking distance of the Yuma Art Center in the center of town. 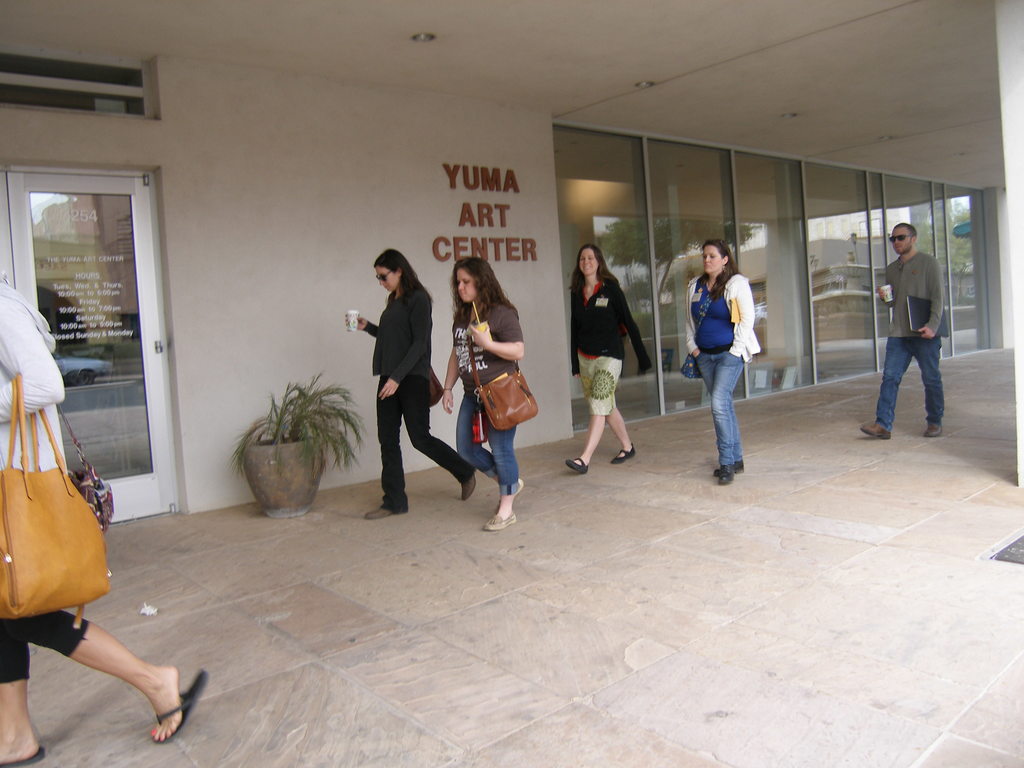 After the presentations I had a very clear idea of which artist talk I wanted to attend and my stomach was about to eat itself. Having survived that day on airplane soda water, vodka (I hate flying) and ginger snap cookies, I was ready for some real food. We walked a few blocks to what I was told would be some of the best Mexican food I will ever eat. All eleven of us filed into this very small building that was painted lime green and was essentially a kitchen attached to a dining room. One of the attendants flipped the open sign to close and we had the place to ourselves. Sometimes, when I am lucky enough to be in a group of individuals that I know are insanely talented and motivated I like to imagine: what if all that ability was a tangible force or energy that you could see? I can honestly say that during that dinner with old friends and new ones at the infamous Tacos Del Ranchos (where we ate every day of the Symposium) I felt a creative energy zipping back and forth across that table like fireworks. I remember a feeling of gratefulness washing over me, partly because of the fish tacos and partly because I was imagining the creative energy in that room building up and popping the roof right off that taco shack. After the best tacos in the entire world and a margarita or ten we parted ways to go recharge at our hotel. A majority of attendees stay at the Best Western Coronado, located within walking distance of Downtown with two pools and a sweet hot tub. However, my love of mid-century neon signs and the fact that we had rented a car took us to The Yuma Cabana three miles down the strip. As we drove up we immediately noticed: “With a Lazy Boy in every room!” proclaimed the easily thirty foot tall sparkling beacon of hope, a shower and finally sleep.  We wearily checked in (I took like fifty free postcards that were in the lobby) and hauled our belongings into our surprising clean and pleasant smelling room.  Ordinarily my excitement for the day to come (still needing to register, donating my pin to the pin auction, dropping off my work for the student exhibition, and signing in to work study etc.) would have kept me awake for some amount of time, but the mixture of extreme exhaustion and a few strong margaritas is a magical concoction.  All in all the first “unofficial” night of The Yuma Art Symposium was a whirlwind of creative energy and it was only just beginning. Stay tuned for my next post on the second day of the Yuma Art Symposium.