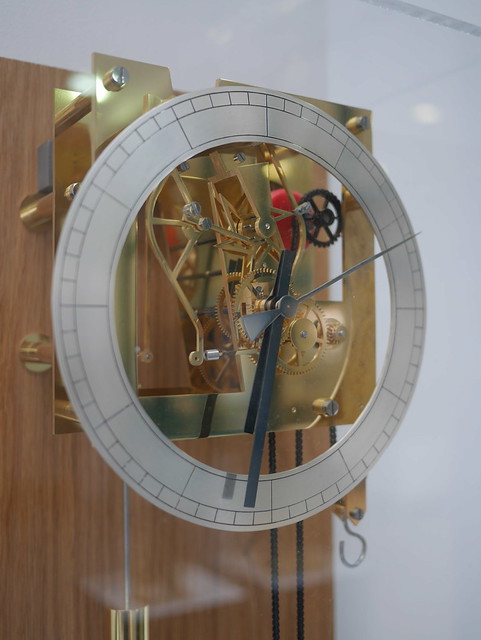 It's that time of year again when the jewellery graduates gather up their work from the year and present it to the public. I'll start off with the show-stoppers from Horology.

Our BA Horology is the only degree course in Horology anywhere in the world and the results this year have been amazing.

The whole of the final year for these students is spent making a clock to their own plan and design. It can be a copy of an historic clock, a variant on something well-known. In this case, Simon has created a wall clock based on the mechanism from the clock in the Westminster Clock Tower (erroneously known as "Big Ben").

Ruth Dobie's clock is by far my favourite, taking the traditional idea of the clock as a miniature architectural form and fragmenting it. On first glance it is immediately obvious that it is a beautifully-made clock but further study shows that the forms are fragmented, that it is asymmetric. Although not installed at the time this photograph was taken, it contains a "Tellurium", a model of the solar system...

Looking inside these clocks is no less fascinating:

My own course, the HND Jewellery and Silversmithing contained the usual mix of large- and small-scale works and I especially like these vessels by Mike Mullaney:

Also in the impressive silverwares department are Vicky Faraone-Pirie and Daniel Bollard:

There was, of course, a lot of jewellery as well and we had some spectacular wax-carving this year:

Taking wax-carving in a very different direction is Ashley Lizamore, who has made some diamond-set gold dental grilles: 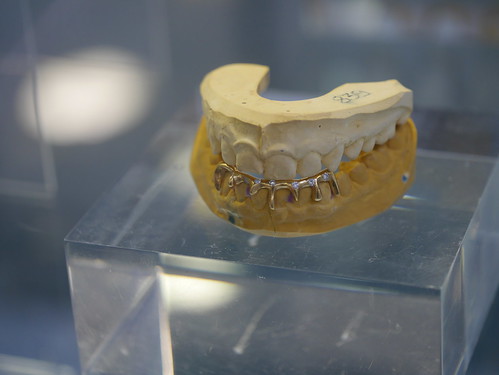 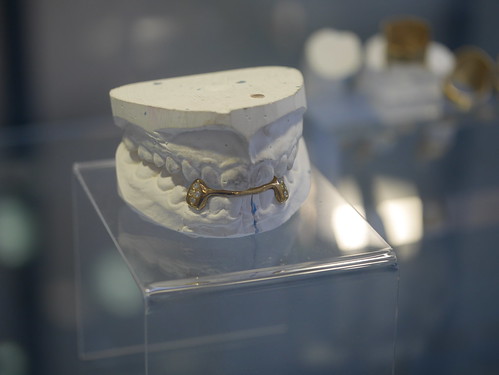 Of course, there is also some very impressive fine jewellery:

I also particularly like the technological interventions some students have pursued:

Which brings me neatly to the BA Jewellery Design for Industry (DFI) course. Most of these people have been on the HND last year and it has been interesting and exciting to watch how they have developed (see my blog for last year's show here).

For me, the most impressive work in the DFI show is that by Gil Hadden, who has made a series of knives: 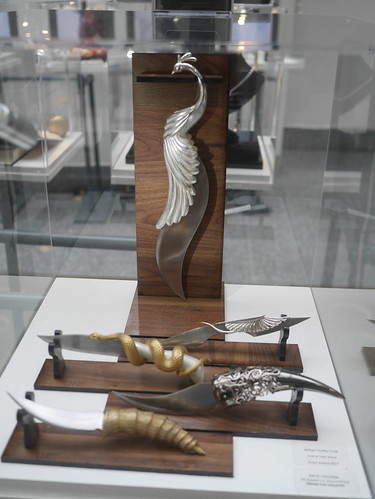 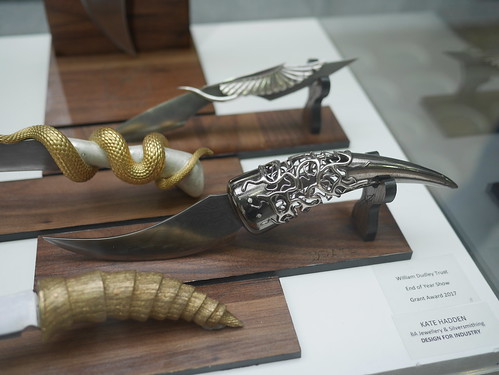 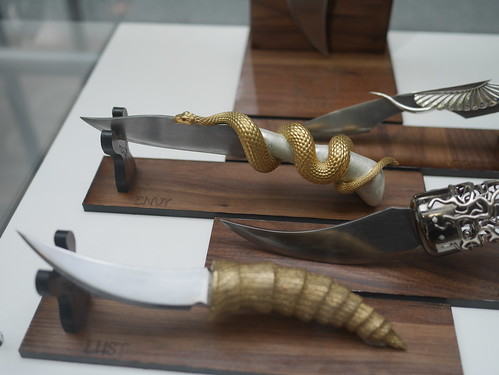 The range of materials and techniques in the DFI group is amazing, stretching from Fine Jewellery by Georgina Stanley: 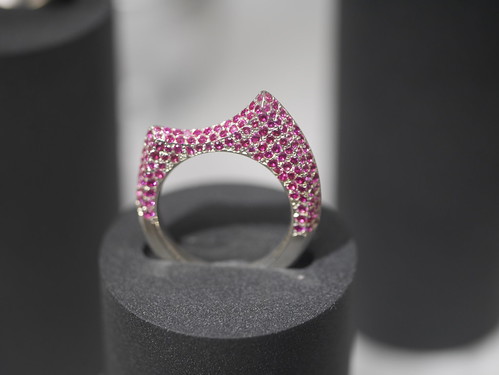 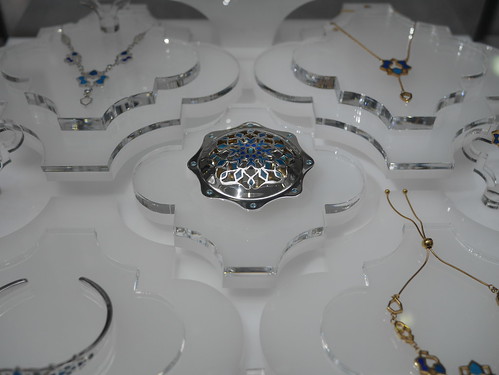 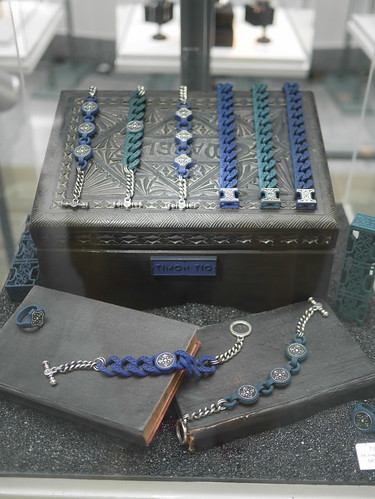 As well as some quite remarkable mokume-gane by Yi Feng: 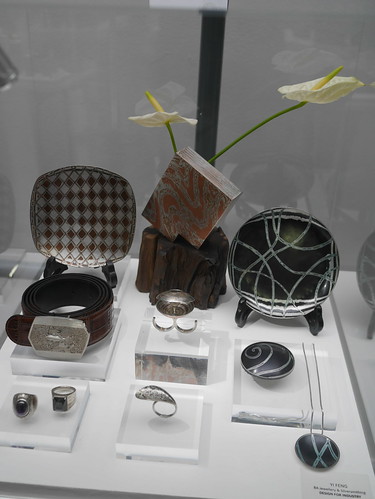 Which leaves the behemoth of the BA Jewellery Design and Related Products with their more experimental approaches to design and materials. I'll start off with my favourite work from the show, that of Lois Wiseman: 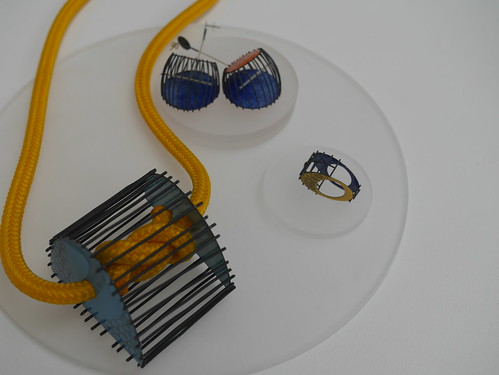 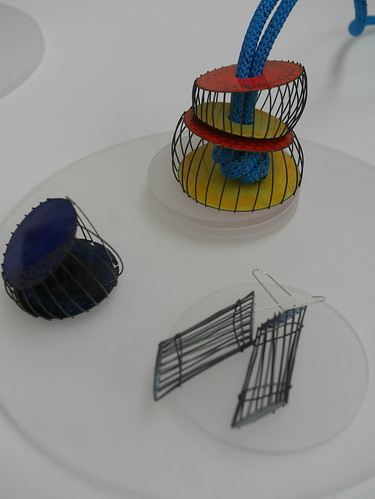 I've commissioned a brooch from Lois and would love one of the pendants. Her use of colour and form is so fresh and once you know that it is all derived from the lobster-pots in her seaside home, the narrative is delightful.

There was quite a number of very interesting "issues driven" presentations, including these hilarious and thoughtful takes on the issues facing people with OCDs:

Ching-Ye Fang chose to tackle issues around food-waste and made "gemstones" which contain decomposing food waste and which will, presumably, change as they are worn. I love that these are so simply set: 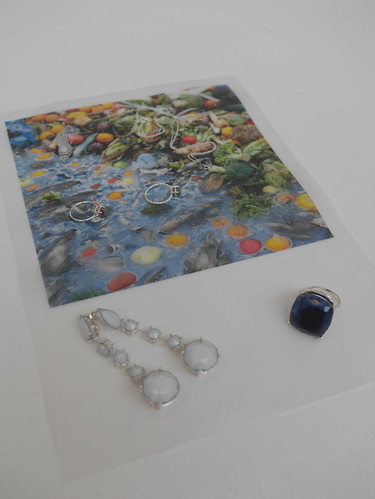 Freya Gilgrist chose to tackle the mental health issues arising from domestic violence in a challenging collection made from metal and jesmonite: 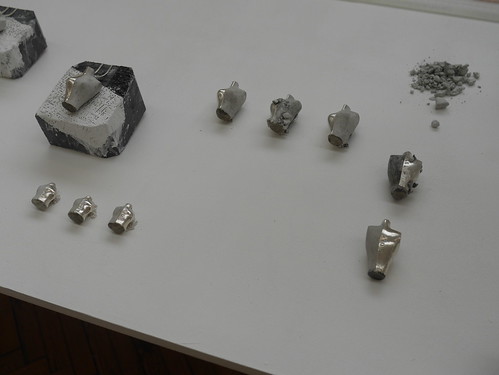 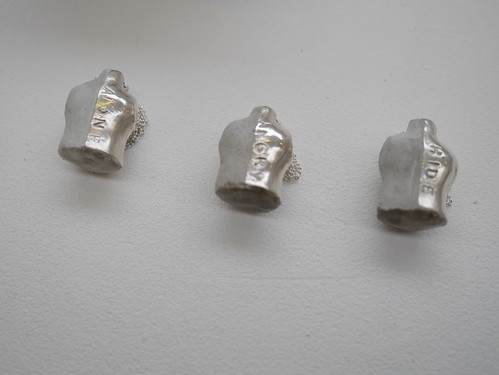 I was intrigued by these beautifully made pieces by Xinyao Huang which deliberately challenge the boundary between "jewellery" and "object": they are all wearable, but some only just so. 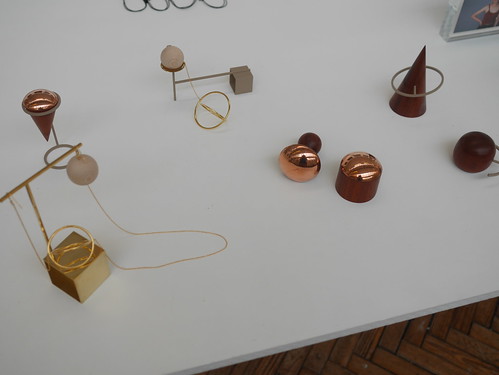 Danielle Laurent's collection references not only historic jewellery but historic processes, bringing them into the 21st Century with digital production and flocking! 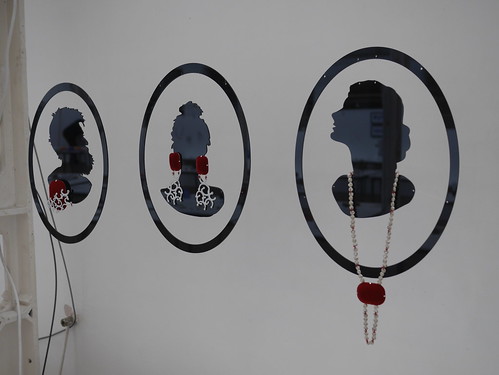 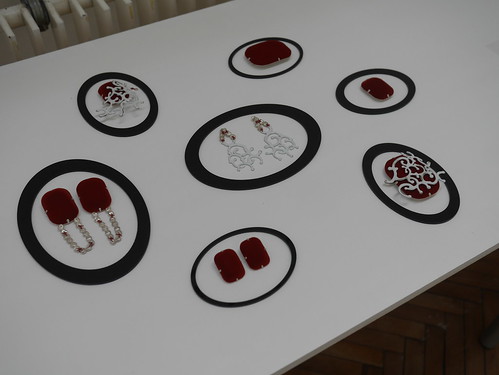 There was only one silversmith this year, Joseph Westley, with his beautiful, layered vessels: 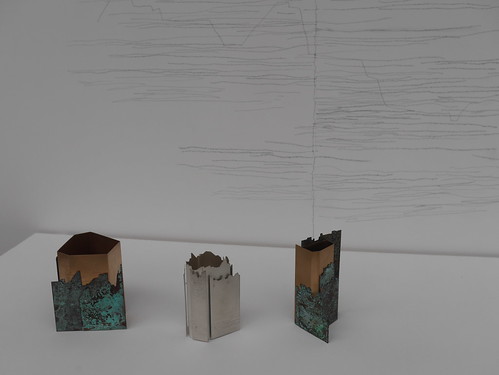 The private view - our "Industry Night" was launched by Barbara Schmidt and was, as always, incredibly busy. 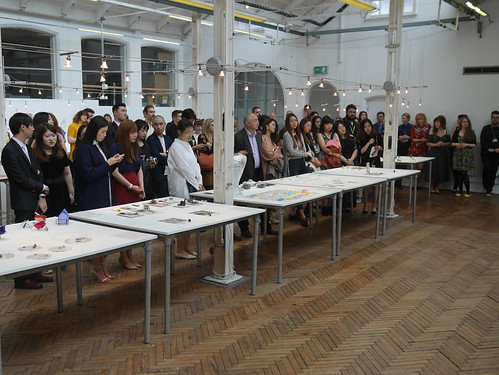 This is also a night when the students are presented with their prizes, many of which are sponsored by the jewellery industry.

On Saturday, we had the second "private view", this one a much more relaxed affair and aimed not at the industry but at the friends and families of the graduates. It was so relaxed that here is a photograph of our Head of School, Stephen, and our Deputy Head of School, Jeremy Hobbins, staffing the bar! 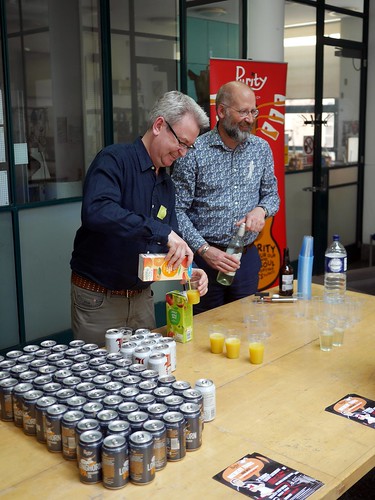 Our students also took the opportunity to thank Jo, Kate and me for our input over the year, which is lovely.

Almost all over for another year (New Designers next).

In the middle of the week, we had a fantastic interlude to go and help celebrate the opening of the new bakery/cafe/rooftop urban farm/social enterprise that is "The Hive" in the Jewellery Quarter, run by the Ruskin Mill Trust. We'd already been alerted to the top-notch food that was being prepared in The Hive and it has become a kind of de-facto canteen for the staff at the School of Jewellery but none of us had quite realised that there was a market garden on the roof! 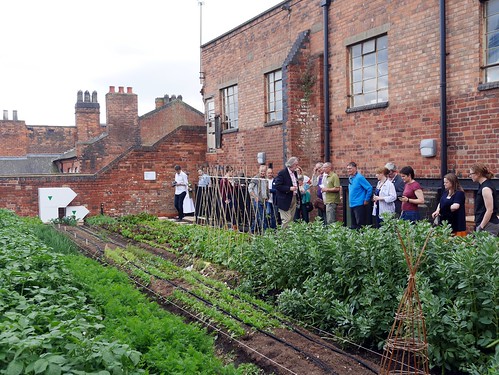 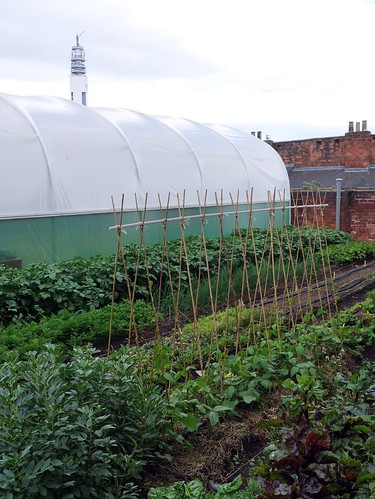 This place is amazing. Not only is it a proper educational college for people with learning difficulties, but this is a biodynamic, organic garden and the food is all prepared from the garden by the students. This is the training kitchen: 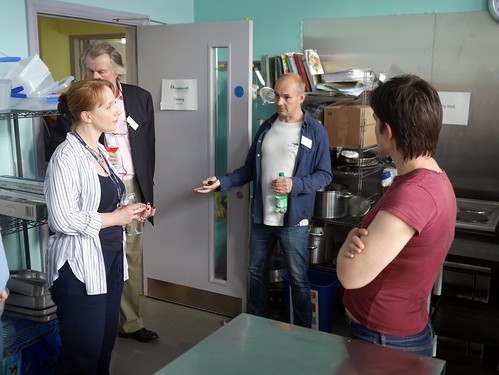 The cafe itself is lovely.

And the food is WAY better than anything else on offer in the Jewellery Quarter. We particularly liked the scones with cream and jam: 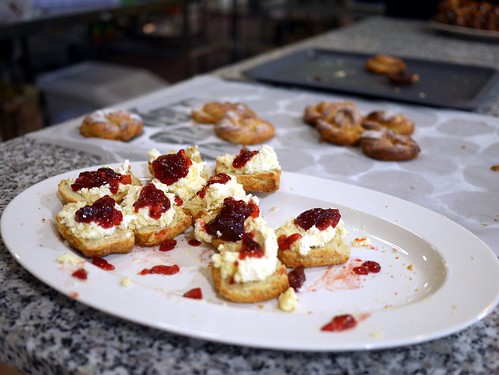 I hope this place goes from strength to strength.

Friday night, I was off to hear Anna von Hauswolff at the Town Hall, playing the legendary Town Hall organ as part of the Supersonic Festival. Her music lies somewhere between Julee Cruise/Badalamenti, Diamanda Galas and Mogwai, but played on a pipe organ, supported by a fairly standard rock lineup of guitar, drums and synthesisers, creating music which manages to be both dark and uplifting. 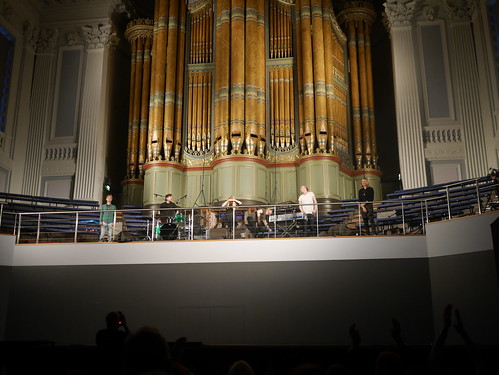 The set was all too brief - around an hour - and it was annoying that we had been forced to endure an onanistic Oud solo by the curator of the festival for about 40 minutes beforehand, a heap of tedious noodling which went precisely nowhere. Another 40 minutes of Ms von Hauswolff would have been much preferred.

Have a listen to the unbelievable sound she creates here:

The rest of the weekend was spent in the garden, harvesting artichokes, tending the basil crop in the greenhouse (yes, you can have too much basil, as I found out last year and seem to have made the same mistake again!) and planting out my odd Italian salad vegetables, Stridolo and Rampions. I'm also very excited about the prickly pear seeds which I took from a fruit I bought at the market here and which have started to sprout: 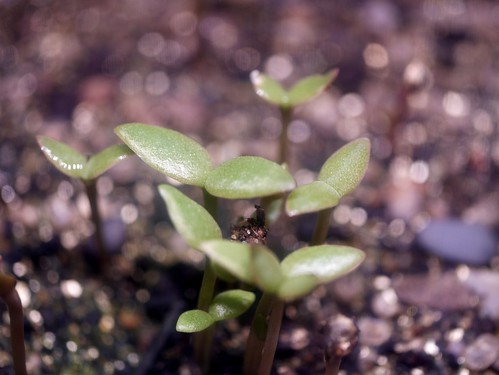