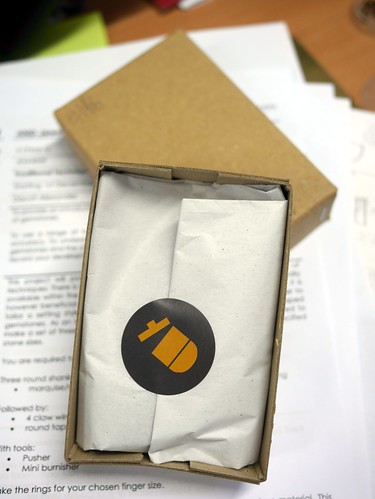 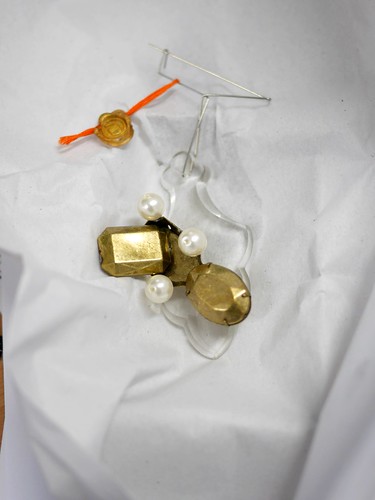 This is the start of my fourth month in Birmingham, one quarter of the year gone already and the New Year upon us; all change. It was nice to start the week by receiving my piece from "JUNK", designed and made by my colleague, Drew Markou.

Monday also saw me marking the first project by my Level 4 group, the "insect project" in which they learn basic metalworking skills by designing and making metal insects and they came up with an impressive array. Unfortunately, I was without camera on Monday and Tuesday, so only have photographs taken with my iPad but they give the idea:

Impressive stuff! These people mostly had never held a piercing saw before they started and although I've only featured a few insects here, the group achieved a whole lot of "Merit" grade passes.

The new "Technology Hub" opened on Tuesday evening. This is a fantastic collaboration between the School of Jeweller and the jewellery industry in Birmingham and further afield, pulling together business consultancy, 3D scanning and modelling, research and education in one space dealing with the most cutting-edge technologies. 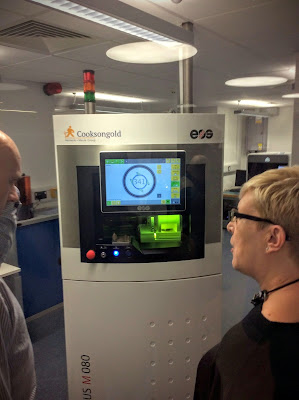 Here you can see Dawn Meaden-Johnson of Bespoke Jewellery Training looking at the new Cooksongold precious-metal sintering machine in operation. This incredible device was working on sintering a watch-case in 18ct gold...

Here you can see the laser fusing the surface of the 18ct gold powder to create the solid shape.

My colleague, Keith, was showing off the 3D scanner: 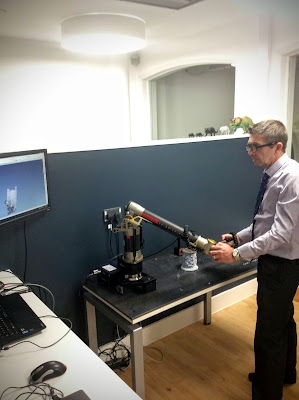 The hub was opened by Gaynor Andrews, Head of School: 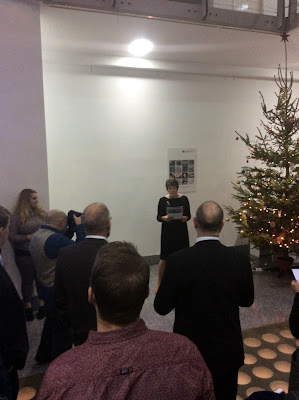 And everyone attending received a commemorative fine silver coin which was designed by a student and produced digitally using technologies in the new hub: 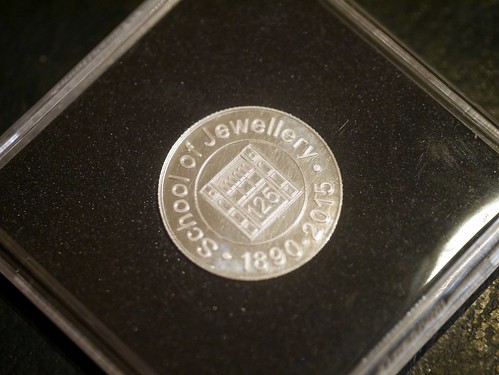 As you've probably noticed, the "festive" season is upon us. I can't much be bothered with it. Neither, it seems, can the technical staff in the basement at the School: 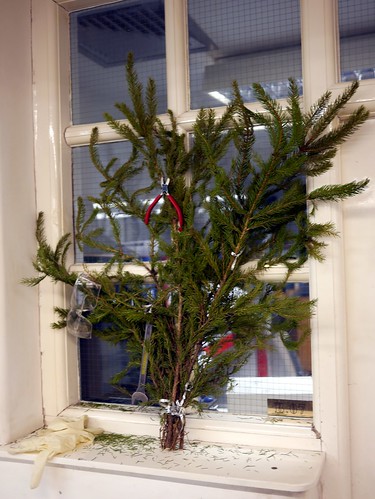 This being the sole reference to Christmas in the whole of the basement area.

Hot on the heels of the BA Selling show (see last week's blog) came the small show by my HND students which they enterprisingly took to one of the other Birmingham City University campuses where they have a retail space which is specifically for small student sales. Pleasingly, they lined this up to coincide with the BCU staff festive reception. 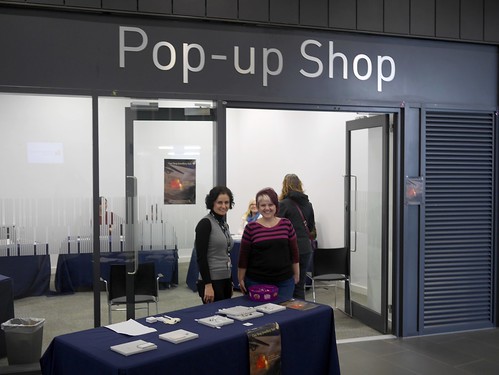 The event was a good mixture of Level 4 and 5 students with some work by Artists in Residence. 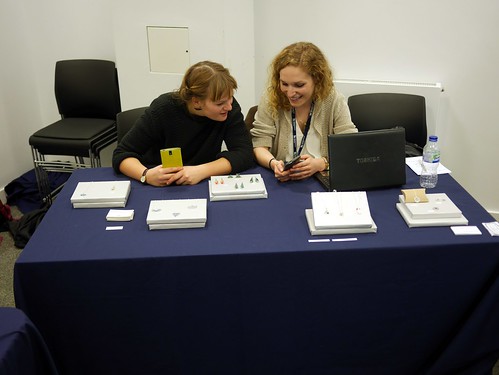 I was particularly taken with the work of Tom Asquith, one of the Artists in Residence: 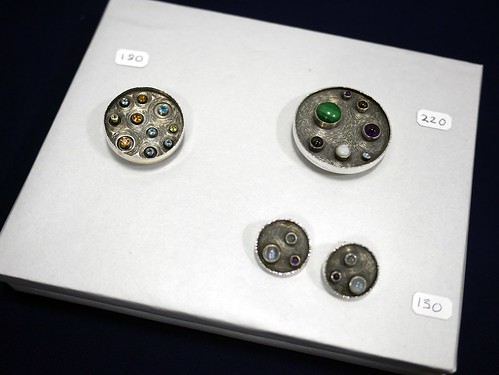 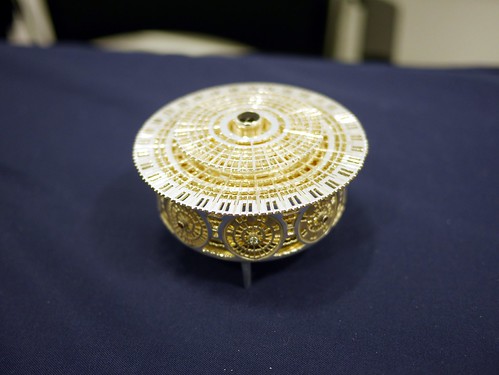 He definitely channels that late 1960s/early 1970s British jewellery - Grima, Donald, Flockinger - which I love so much.

The staff reception was good, though one of my School of Jewellery colleagues came along. One of the definite plus points of working at BCU is the access to the Conservatoire and good music events. One of the student brass bands did rather better than the average Salvation Army band in providing the festive carolling! 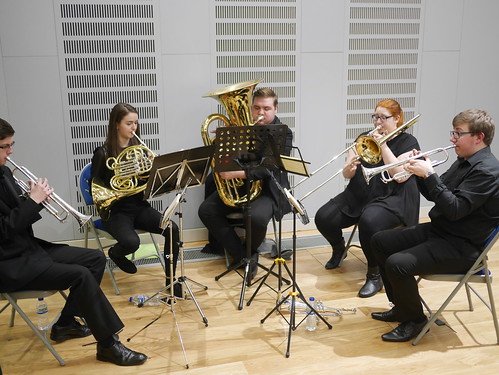 After the reception, I went with Toni Mayner to look at the exhibition in the Parkside Gallery, "Textiles &..." 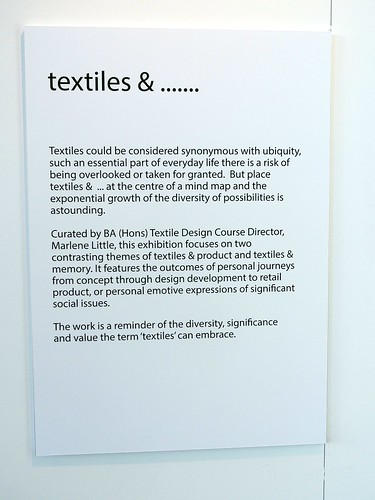 This show featured the work of our colleague, Sally Collins, a.k.a. "Superfrillylover". 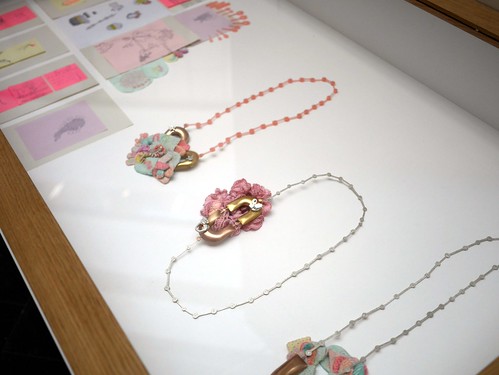 I like this work a lot, which surprises even me as her colour pallet is one which I normally reject out-of-hand. With these, the fusing of colour, texture, material and form is so thorough that it overrides my normal horror of "pastel". As with most gallery presentations, it makes me wish I could see the work worn. 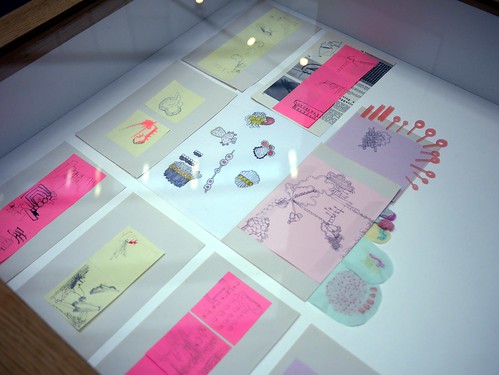 The other must-see in the show is work by both Jenni Dutton and Marlene Little. Jenni's work is an almost unbearable series of stitched portraits of her mother in various stages of ageing, the colour and density of the images fading as the series progresses through age. They are exquisite, touching and very poignant. As I said, almost unbearable. 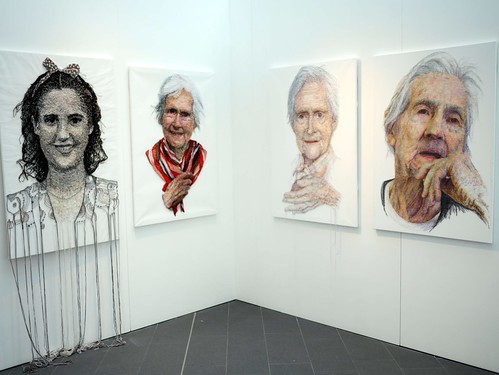 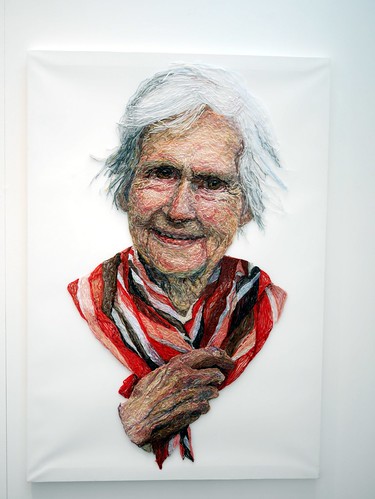 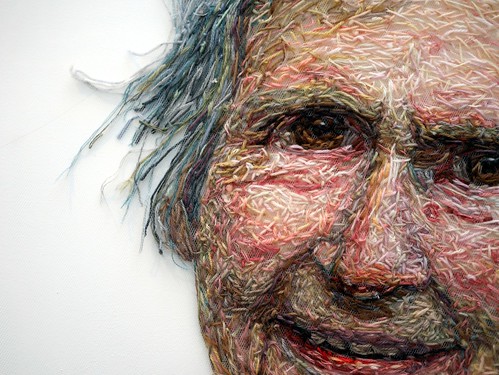 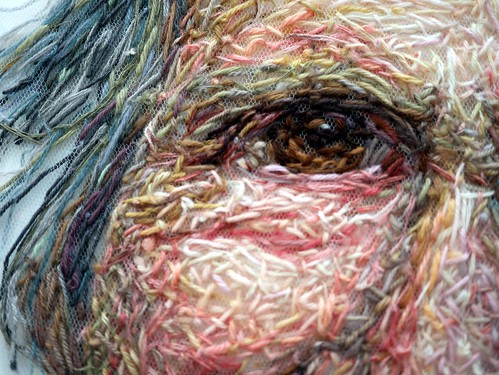 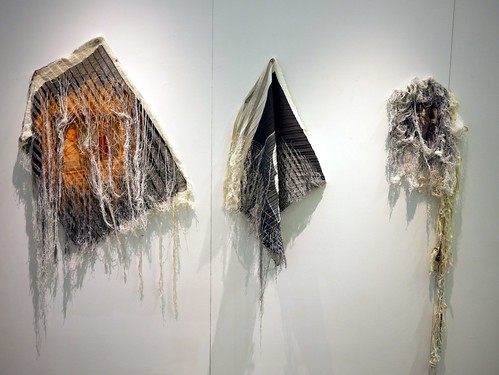 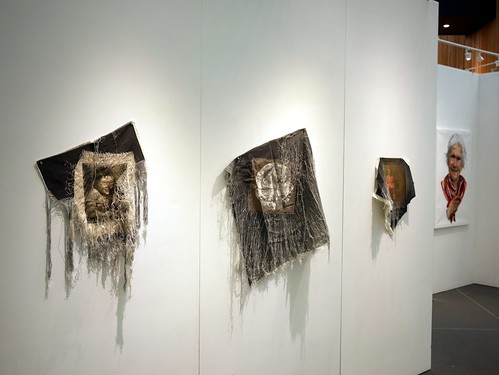 On the way out, I noticed a side-case containing the bewildering, obsessive collection of "Bearbrick" figures by one of the lecturers in print/typography, David Osbaldestin, whom I met for the first time at the careers fair in Manchester a few weeks back: 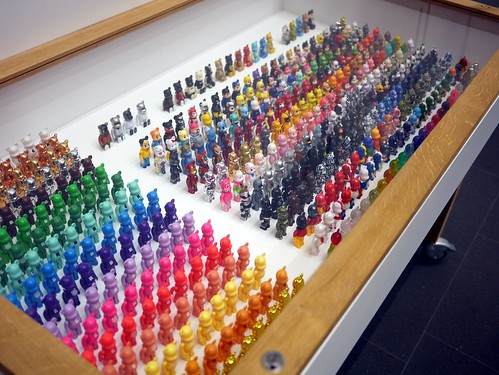 Rather like my own collection of Czech glass fish, there is something wonderful about the massing of objects which may seem rather pointless alone.

Thursday brought another lunch with Steven Medhurst and a quick visit to a new gallery opening in the Jewellery Quarter which is all a bit hush-hush just now. I'm glad that Steven has decided to make the Quarter in Birmingham his new jewellery hub, rather than going to Hatton Garden and would hope more people see the advantages of doing the same! 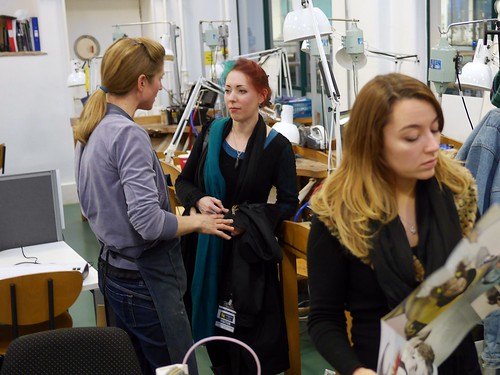 I got to meet one of my absolute favourite jewellers this week too when Anastasia Young (middle in the above photograph) brought her friends Olga and Rok to visit. They are Slovenian jewellers who work in 3D-printed nylon and they were in the Quarter to see what facilities were available to them here. It was brilliant to be able to show them the newly-opened Technology Hub and to introduce them to the BA DFI students in their CAD studio. 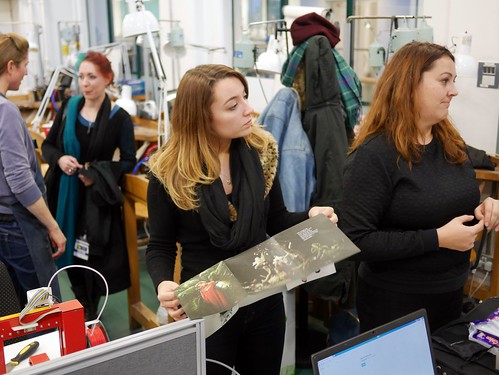 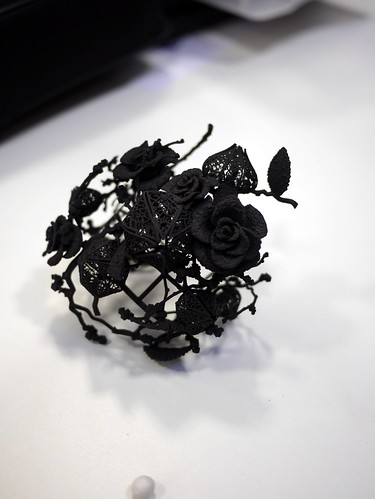 I also introduced Anastasia to Rachael Colley - they share an interest in mourning jewellery - and it turned out that Anastasia's partner, Paul Wells, has a large collection of such things...

The Death Collector from 1968 Film Group on Vimeo.

Friday was a normal day in the workshop with the students, doing their mount-making in the run-up to Christmas and I even managed to get a few hours in the evening to get on with the last commission before the holidays, "Lady Baird" - 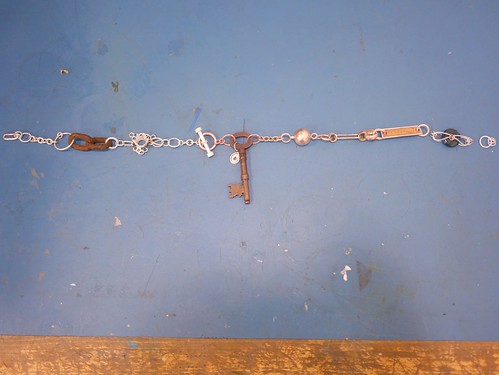 Which should be finished this week. 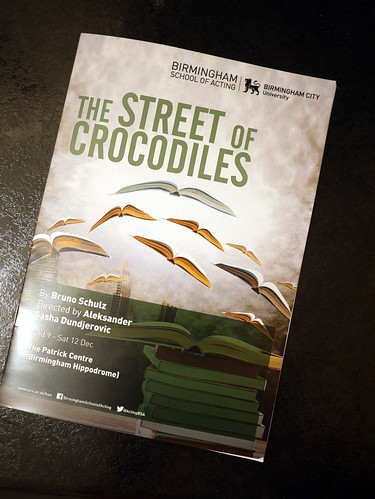 On Saturday, I went to the theatre to see a student performance of "The Street Of Crocodiles". I saw the original of this by Theatre de Complicite in the late 1990s in Edinburgh and was absolutely blown away. A piece so powerful it has stayed with me as the single best thing I've ever seen performed on stage and at the end of the performance I fled the theatre to avoid hearing anyone speaking about it.

This was not the original but a version of it and while it was less fluid and "effortless" than the Complicite version, was still deeply affecting and compelling. (The highlight was the brilliant Danse Apache between Joseph and Adela.) 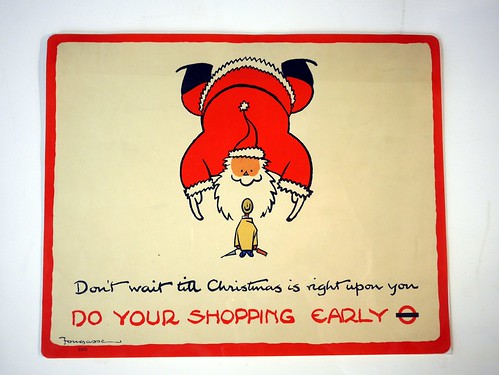 This beauty from JUNK is mine! Brigitte! Good to hear from you. You would be very welcome indeed in Birmingham. I am hoping that I'll have a house with a spare room very soon and I think that you'd fit in perfectly at the School: Jivan would be delighted to see you too.

DO post pictures of the piece you won in the auction.

I do know Renee's work and especially love her "Artifacts of Self-Making".

There's so much info in here, I don't know where to start with a response. Let me try:

First off, the insect brooches are an ingenious student project! Very nice results on show here.

Second, I am awaiting the JUNK necklace I bid on. I know it is in the mail, I received the notification that it will be delivered soon, can't wait!!

Third, "One of the student brass bands did rather better than the average Salvation Army band in providing the festive carolling!" - Hahahahaha!

Fourth, For more mourning jewelry/objects please take a look at my US friend Renee Zettle-Sterling's work. I think you'll like it.

Fifth - I REALLY need to come out and visit you in Birmingham! Soon! You are having way too much fun without me.