That Was The Week That Was... 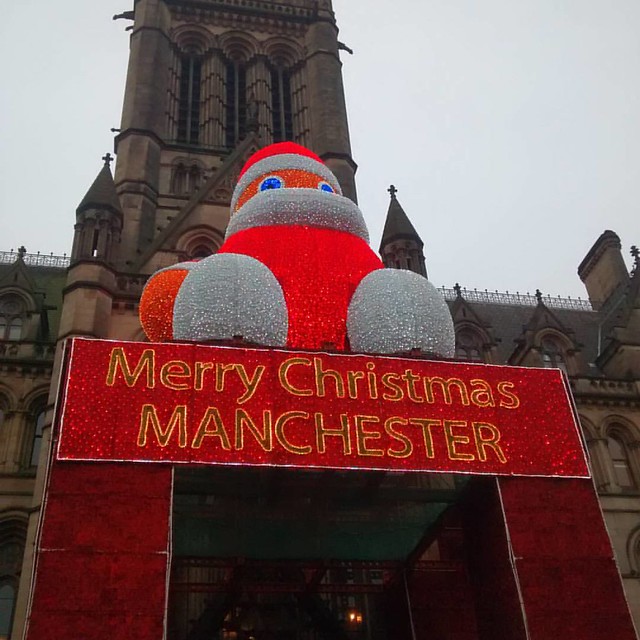 Exhilarating and exhausting.
I'm recovering in Brighton for a long weekend with the howling winds of "Storm Clodagh" driving rain at the windows, a warm sofa and a raft of Hammer Horror films to watch and pizza from our favourite pizza restaurant, the unfortunately-named Pizzaface.

It all started on Monday when I travelled to Manchester to represent the School of Jewellery at the careers fair, "Design Your Future". I haven't been in Manchester since 2008 and this was such a flying visit that I didn't get much of a chance to get a feel for the place. It was the last weekend in November when I last visited, so even the Christmas market was there. Unfortunately, this time, my camera ran out of charge and I didn't get to take many photographs, hence the phone shot above.

The careers fair was what it was: the best bit about it was getting to meet with staff from other departments, such as Theatre, Film and Video, Architecture and more.

After the fair, I met up with my friend, Scott, whom I have barely seen since said visit in 2008, and we spent a lovely evening over dinner catching up.

Particularly interesting detail on this building and one of the two shots I managed to get with the camera before the battery died: 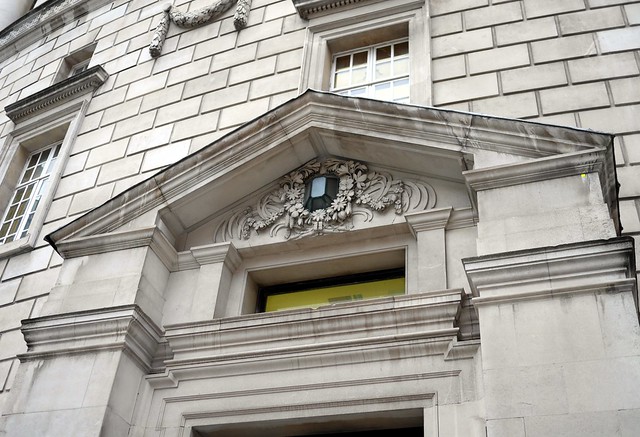 The light-fitting reminded me of my current watch-chain project.

Tuesday, I headed off to London for my talk to the Society of Jewellery Historians which was being held at the Royal Society of Antiquarians in the legendary, esteemed Royal Society building in Piccadilly. I used the morning to travel and then took the afternoon to visit my favourite London museum, The Wallace Collection. Every time I visit The Wallace, I discover something wonderful and new, this time it was some amazing miniature paintings made 3-dimensional by modelling in wax, which was then painted. I don't know how I managed to miss these previously: 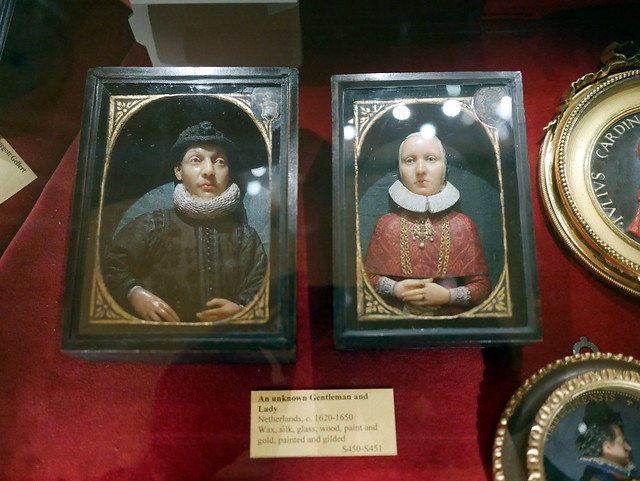 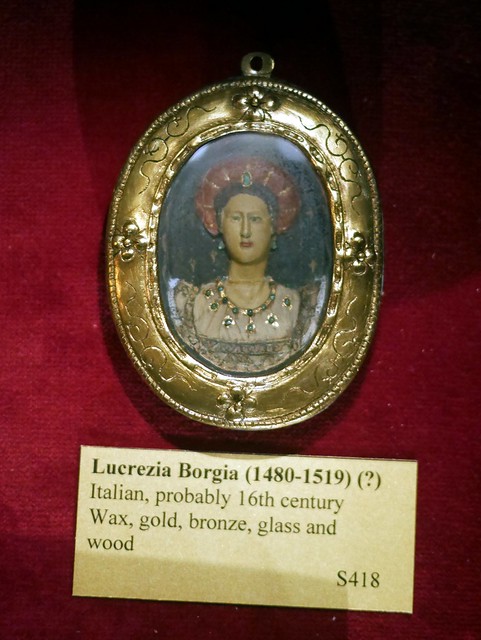 I also found Messonier's "Polchinelle", which was interesting in terms of the "Punch and Judy" piece I'm working on: 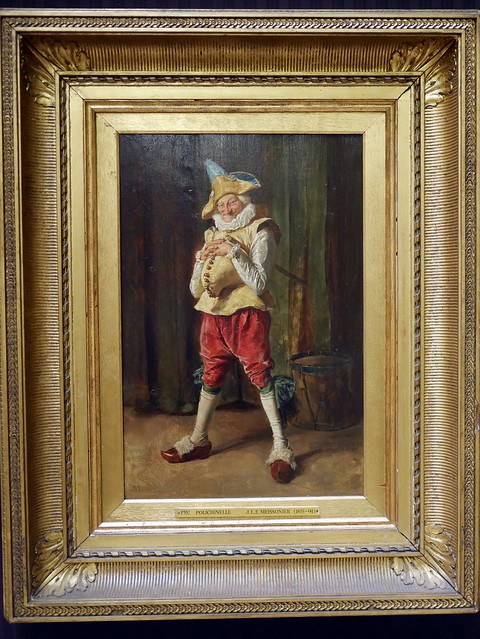 What makes these discoveries so odd for me is that the collection never changes! The whole collection is on display and it is never loaned out or added to.

The courtyard of the Royal Society currently hosts a rather magical show of work by Ai WeiWei: 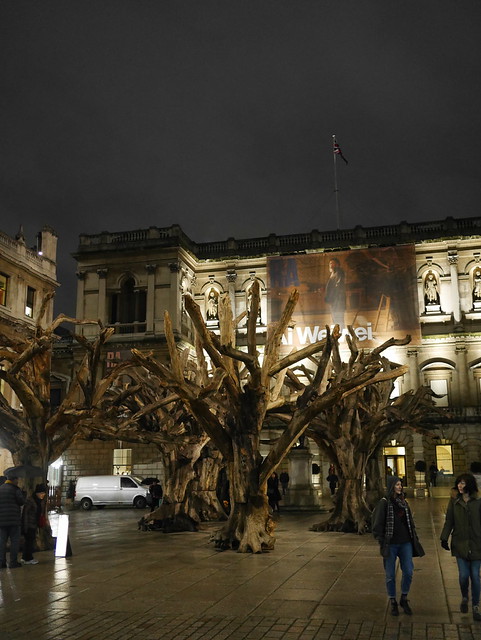 The talk to the Society of Jewellery Historians was held in the Royal Society of Antiquaries. 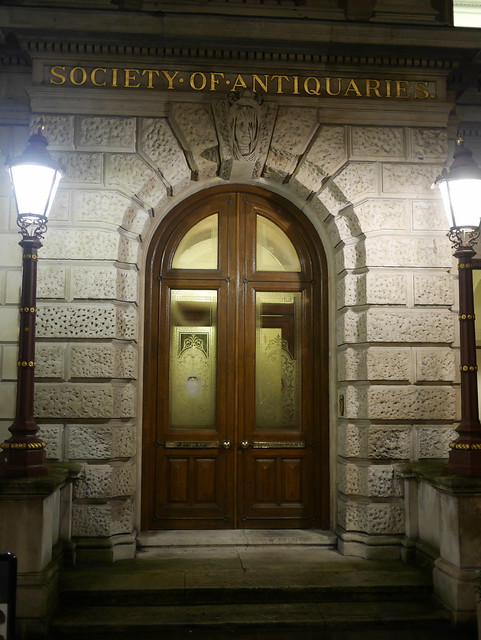 I'm delighted to be able to say that the talk was really well-attended and well-received, with lots of discussion and questions afterwards. 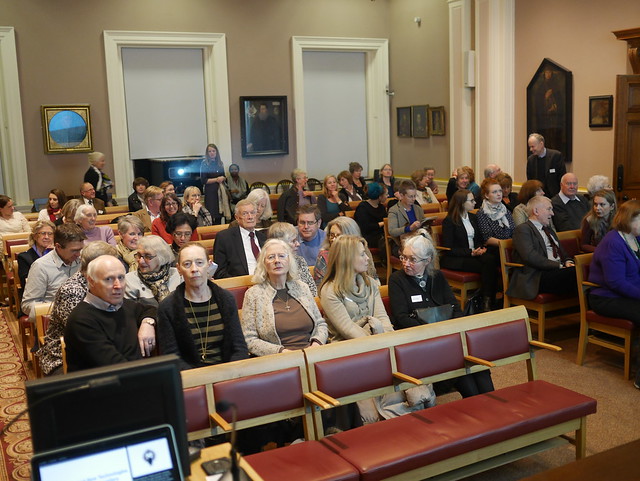 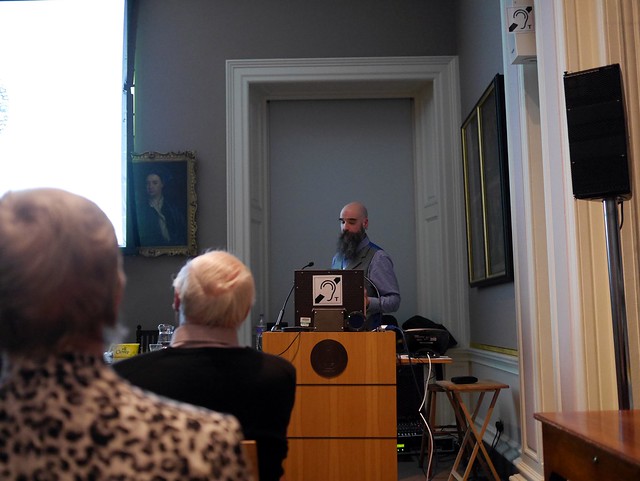 The title of the talk was "Digital Tools and New Technologies in Contemporary Jewellery". Should anyone wish to read a copy of it, the PDF of the talk is here.

After the talk, the committee invited me for a rather excellent Italian meal at a nearby restaurant (white truffles!) before I headed off to Brighton for the night.

Next day, I headed off to Plymouth from Brighton to give a talk about my work and practice in relation to the work that I had in the ACJ touring show, "Sleight of Hand" which is currently on display in The Gallery at Plymouth College of Art. 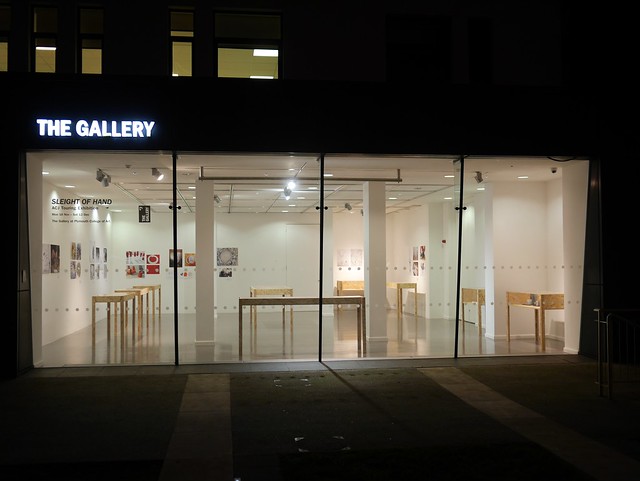 For decades, I've wanted to travel on Brunel's "Dawlish Line" along the south coast of England and finally made it. I was not disappointed: 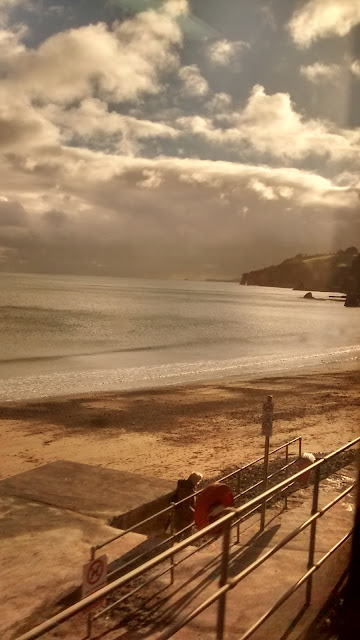 I could have done without being stuck in a carriage full of people reading the "Daily Mail" and an obnoxious family of spoiled brats who screamed the whole journey while their vile parents loudly congratulated themselves on their excellent parenting skills and made increasingly desperate (and increasingly rude) telephone calls to their maid to get her to throw out a tin of tuna which had been opened and left in a bag somewhere in their house. One can only hope that the maid walked out, leaving said tuna in place.

Anyway, I've never been so far west since I was a very young child and my flying visit to Plymouth was most enjoyable. It is an odd city in many ways, a combination of lovely, calm, modest "Festival of Britain"-era buildings, outrageous brutalism, Elizabethan streets and the very worst of 1980s and 90s shopping-centre planning. Combined with a huge waterfront, an enormous student population and a dynamic art school, this makes for an exciting environment. It was just a pity that I didn't get the chance to spend longer there. 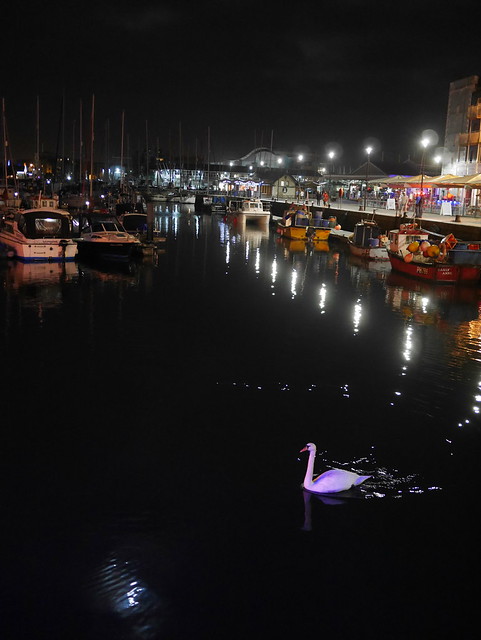 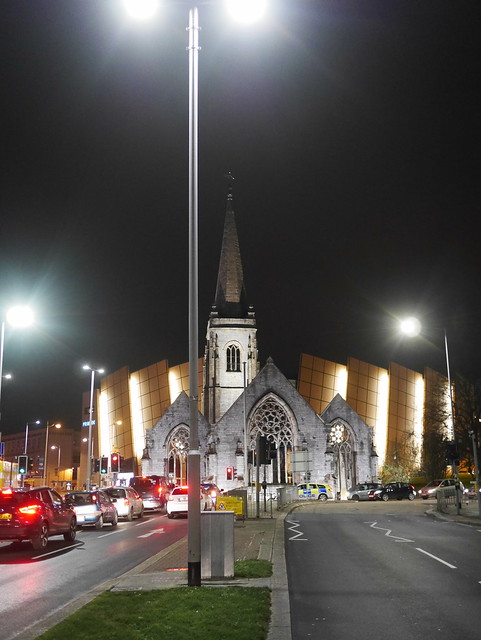 The talk at Plymouth College of Art went very well, again well-attended and with lots of questions and discussion afterwards.

Next day, I taught a workshop on Electrolytic Etching at the college: 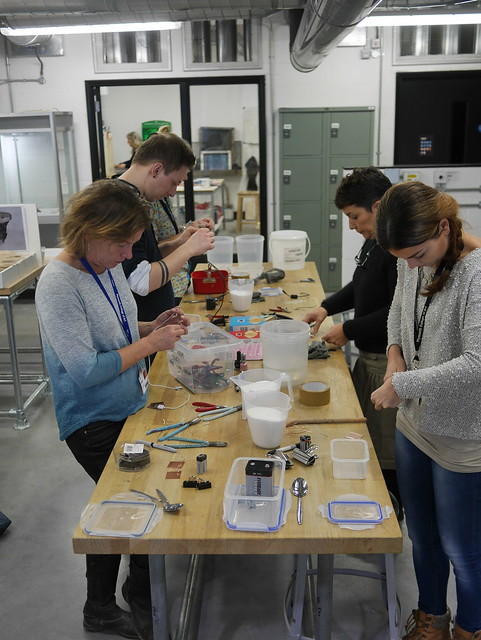 I then spent the rest of the afternoon talking to Maria Whetman and to renewing my acquaintanceship with Glenn Carter, whom I had met some years ago at Northlands glass studio, very nearly forgetting to visit the "Sleight of Hand" show at all! 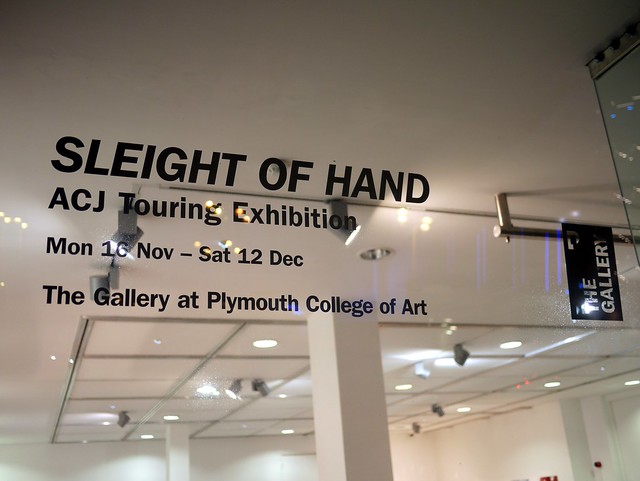 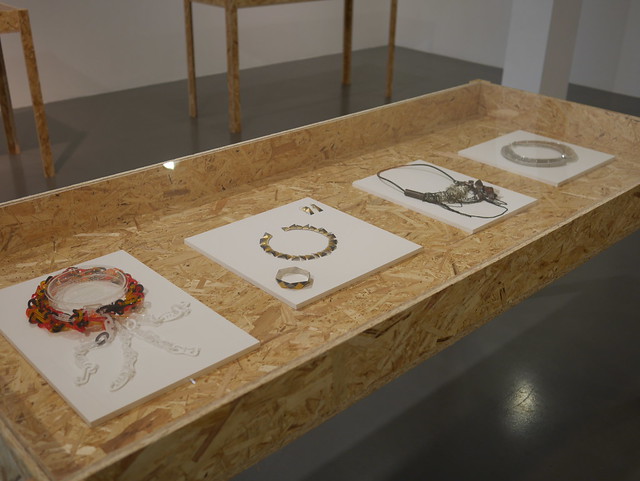 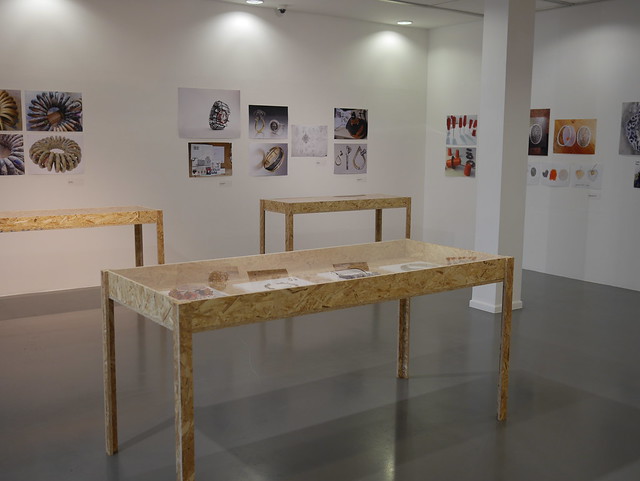 The return journey to Birmingham was utterly delightful, quite the reverse of the journey down: it was calm, friendly, cheerful and chatty and although the train was very busy, everyone seemed in the best of humours.

Back to work on Friday... 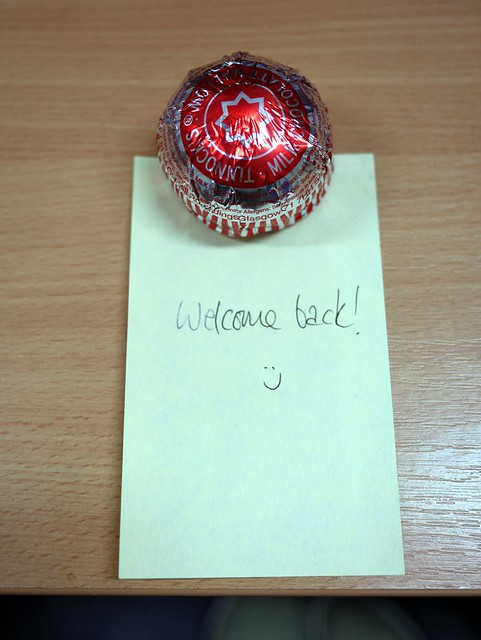 And back in Brighton for a long and relaxing weekend, despite the storm.

Hahahahaha, only you could post something about Polchinelle followed by a pic of Ai Wei Wei's work closely together. Love it.

I had to look up Polchinelle to find out what it was about and, though you probably know all of this, I am posting my finding for those ch readers who, like me,  didn't:

..."This is one of several whole-length figures of ‘Polichinelle’ (‘Punch’ in English) painted by Meissonier. As one of the main characters of the commedia dell’arte, the improvised and often lewd entertainment of Italian origin featuring professional actors in stock roles such as Columbine and Harlequin, the louche figure of Punch, with his pot belly and mischievous smile, was an appropriate decoration for the apartment of a celebrated courtesan."...