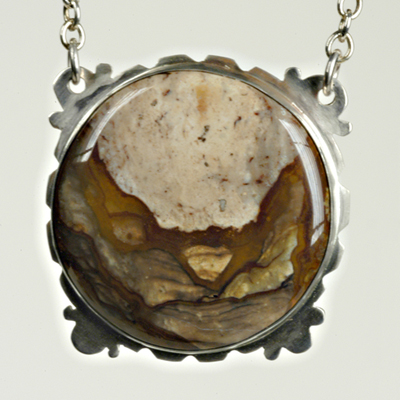 One of the cool things about handmade items is that there is almost always a story behind the piece. Take this pendant, for example. It’s made of Biggs Jasper, which comes from Oregon. We have been prospectors and rockhounds for many decades, and collected the rough used in this pendant in the late 1970’s. You generally have to get pretty far off the trail to find anything good when you’re rockhounding, and this trip was no exception.

We had driven our vehicles about 18 miles off the nearest dirt road and as far as we could go into a ravine. From there the three of us climbed up into the side of the ravine where we thought we might find something. After about 4 hours of digging with picks and shovels, we indeed uncovered some very large boulders of jasper. The boulders were far too large to move. Our companion who is a very
experienced miner, suggested that we plant some dynamite charges to break up the boulders. This sounded exciting as we had never blasted before.

Down to the trucks we went and hauled jack hammers and blasting supplies back up to the site. Three more hours of drilling and planting charges and we were ready to detonate. With great ceremony our friend handed the detonator to Corliss, yelled “Fire in the Hole” and gave her the nod to set it off.

KA-BOOM! It was an explosion worthy of a Hollywood movie, and we were jumping and screaming like kids on the 4th of July. Rocks are flying everywhere, as we look up in amazement to see a massive boulder about the size of Volkswagon gracefully arc across the sky, seemingly in slow motion. We were mesmerized as we watched that huge tumbling rock drift lazily in the air and suddenly drop ….right onto our truck, completely demolishing it.

That’s one expensive piece of jasper right there in that pendant.

So, thirty years later we have cut some that jasper and mounted it in sterling silver on a 20 inch sterling silver chain. This is a one of a kind piece, because we have no intention of repeating that little
episode.

Comment by 2Roses on May 17, 2010 at 2:49pm
There were three of us in two trucks. Our truck became a wilderness sculpture and is still on display right under that boulder where we left it. Prior to this incident we had always wondered about the abandoned vehicles one would come across in the most insanely remote and inaccessible areas. From a Model T to a brand new Cadillac Eldorado and everything in between. Our curiosity has been pretty well satisfied on this point.