The Costumes of Astrid Hadad

The Costumes of Astrid Hadad! from DAX MGMT on Vimeo.

Described as "one of the most provocative stage acts since the Weimar Republic was in bloom" (New York Times), ASTRID HADAD is an internationally acclaimed Mexican cabaret performer, historian, social critic and activist. Her unconventional shows – with syncretic style and eclectic taste – combine ranchera, bolero, rumba, rock and jazz, a unique musical form that has been dubbed 'Heavy Nopal' (after the quintessentially Mexican cactus whose juice is distilled to make Tequila). Drawing on elements and traditions of Mexican and Latin-American popular culture, Hadad creates unconventional and baroque visual proposals that highlight complex social and political realities in an entertaining and accessible manner - so much so that entire families, from grandparents to their grandchildren, are a fixture in the audience of Hadad's many public performances in Mexico. A cultural icon in Mexico, she has performed at numerous universities, art centers and museums throught the country festivals including Cervantino and Cumbre Tajin and before an audience of a million people in Mexico City's Zocalo. 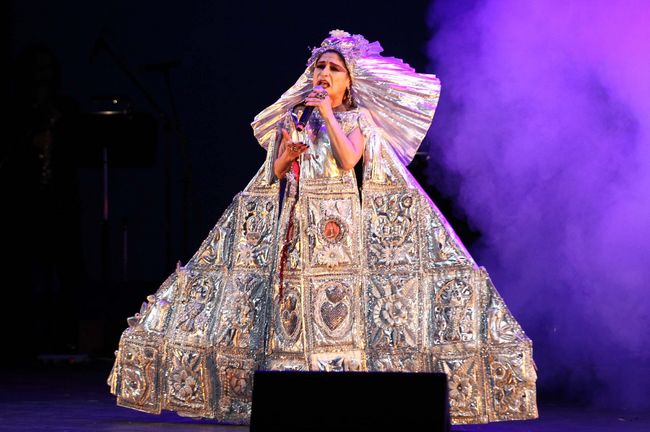 We just missed her appearance in NYC 2 days ago:

She's been 'floating' around on fb these days, and I'm so grateful that you have featured her here on ch. I would love to see her in performance, but where?

Testimonial: We've seen Astrid Hadad in performance. She is mind blowing. If you ever have the opportunity to attend one of her shows - do it! She is a singularly unique experience.