I've not posted for a while, for which I apologise. It isn't that there has been nothing happening or that I've been too busy: more that when I've had a spare moment or two, I've not felt like making a post.
SO this will be a bit of a longer post than usual as I've been in Brighton again, visited Farnham, and loads of other things besides. I also completely forgot that there should have been two other things of note in the last post: I gave my talk on New Technology as part of the "Talking Practice" series at the School of Jewellery and that the planning has begun for the Jewellery Quarter Open Studios in the summer, an exciting project where lots of jewellers - as well as other creative people who have studios in the Quarter - open them to the public over a weekend. The School of Jewellery will be taking part this year, which is very exciting. 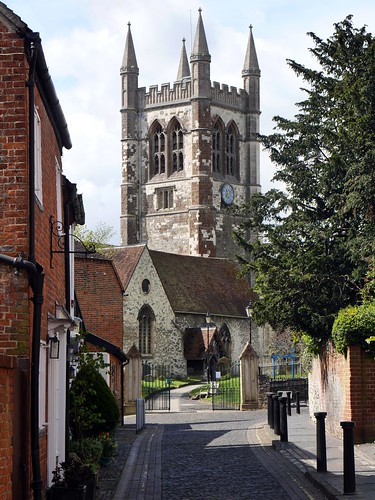 So to Farnham for a meeting of the board of the Association For Contemporary Jewellery and which was absolutely swarming with idiots from UKIP trumpeting their ill-disguised racism and lies about the EU. This left a rather nasty taste in the mouth, especially as the local UKIP candidate - who had the temerity to speak to me - is exactly what you would expect: white, male, upper-middle class, plainly wealthy, well-spoken and with that pop-eyed, slightly twisted face that they all seem to have (think Farage, Carswell...). I believe Cameron referred to them - and this must be one of the few times I've agreed with Cameron - as "Swivel-eyed loons". Still, a swift, unrefined, postively snarling Glaswegian made him back off. I can turn it on when I need to.

Can't say I'll be hurrying back to Farnham, which is sad as there is a fantastic Jewellery and Metals course - run by the ever-cheerful Rebecca Skeels - at the University of the Creative Arts there. I wonder how much the town would be affected by the overseas students leaving in a post-EU UK?

I have finally managed to get the workshop in the house finished! 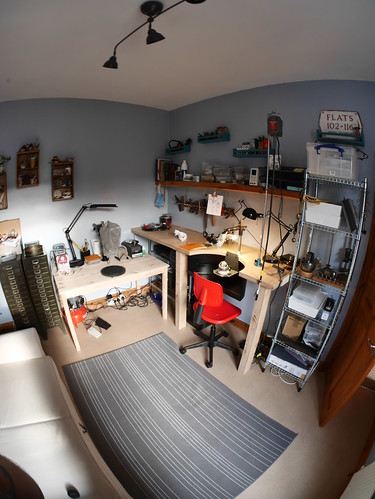 And have even managed to finish a piece of work in it, using the setting bench for the first time: 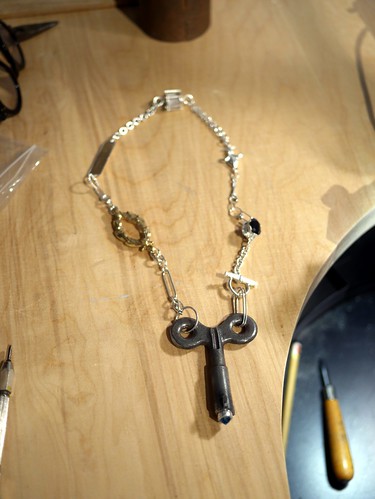 This piece is made from an iron key given to me by my colleague Jo Pond. She found it in her garden. 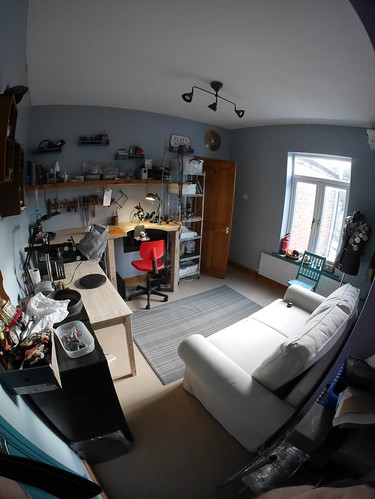 I went to The Coffin Works for the first time last week to see a show of work by tapestry artist, Tina Francis. The Coffin Works is, perhaps unsurprisingly, a factory where coffins used to be made, along with the associated metalworks for the coffins. Originally Newman Brothers, the factory was turned into an artspace and museum when the company closed. 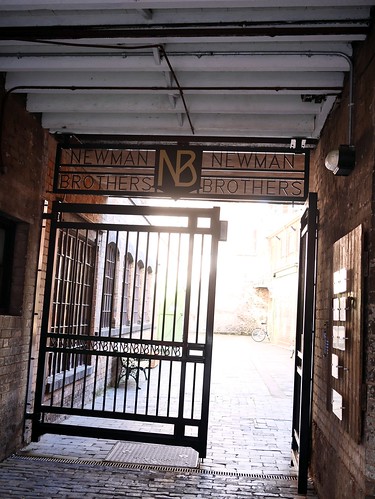 Inside is fascinating, and all the stamping equipment is still working. 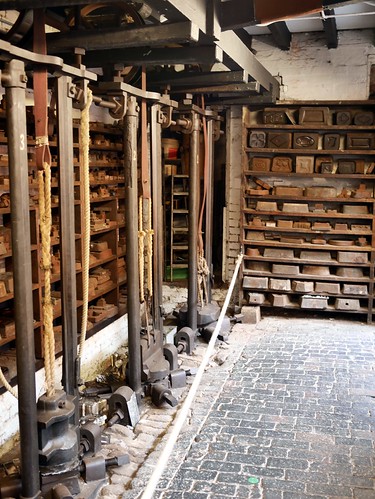 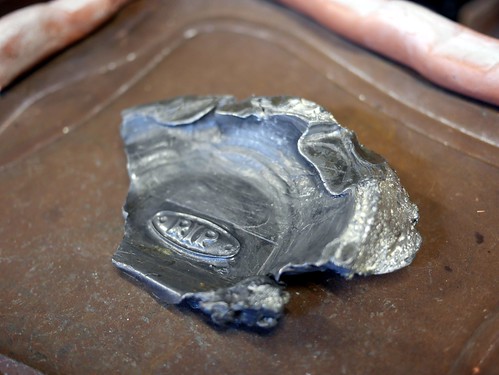 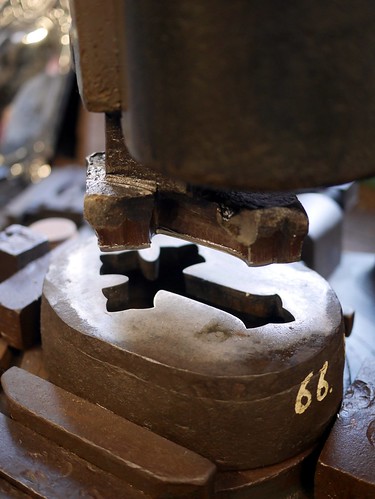 There is a film about the factory here:

Upstairs, in the original office spaces, there is a gallery space which is used by artists to display work relating to the themes of the museum. Tina Francis is currently displaying her work "Seven Stages of Grief", a series of tapestries about her own response to the death of someone she was close to. 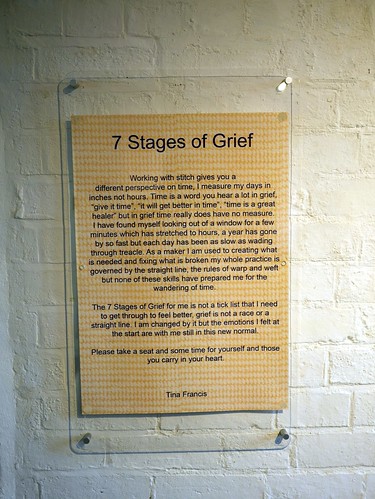 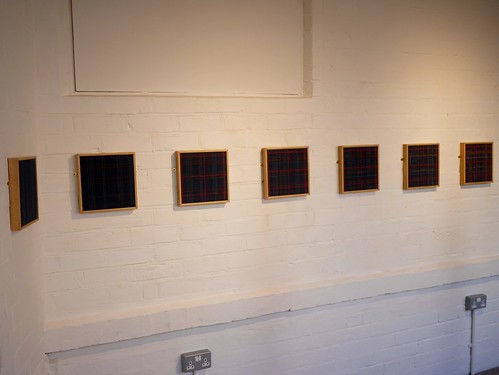 This is a terrible photograph of the work in situ and gives no sense of how the tapestries change from 1 - 7. I was fascinated by Tina's interest in the back of the works, which she photographs and then uses the photographs as part of the overall work: 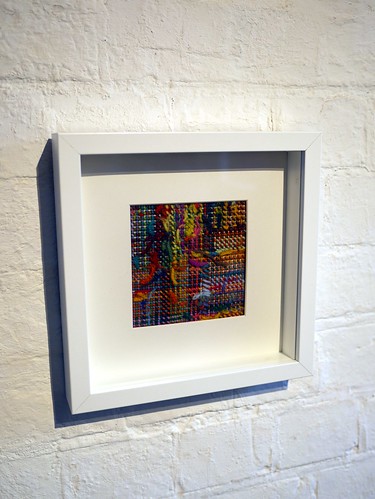 Tina is a bit of a force of nature and I'm pleased to say that she is a major part of the Jewellery Quarter Open Studios, mentioned above.

I brought in the eminent Peter Johns, inventor of "Argentium" silver to speak to the students about the material and to give us some background to the use of Argentium in contemporary jewellery and silverwares. 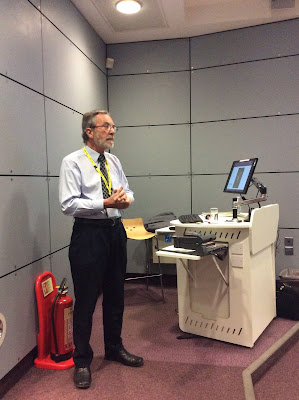 This was a fascinating lecture and it made me rather sad to think that Peter invented this stuff while he was researcher at Middlesex University attached to the BA Jewellery and Accessories course which is being closed down this year. The shortsightedness of closing down these specialist craft courses is unbelievable and one only has to look at the work Peter has done, or the work of our own Jewellery Innovations Centre in the School of Jewellery to realise that. These courses have built up over decades, gathering expertise and equipment. They are largely a product of progressive, liberal education policies of the sort which don't test four year-olds and which - rightly - see art, craft, science, play, radical philosophy and all the other rag-tag of subjects as important to the development of a rounded, creative and dynamic society. These programmes will never be re-instated. We axe them now to the detriment of society now and in the very long-term.

Anyway, I bought some Argentium the next day and have been experimenting with it. I'll write up my thoughts in a future post.

Madelyn Smoak came to visit last weekend and we made pickles! 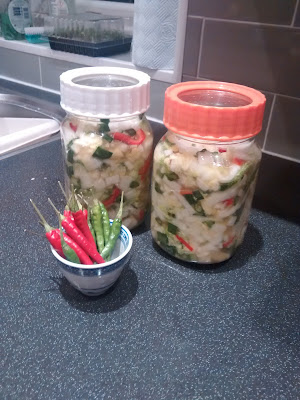 We did lots of other things as well, but Madelyn is a big fan of fermented vegetables. I am a big fan of Korean KimChi - which I first tasted in San Francisco a few years back - but don't like buying it as I've not found one in this country that I really like. I've always shied away from making it as I'm scared of it going off and making me ill - very unlikely, it seems - so some guidance from Madelyn set my mind at rest and we made some. Very good it is, too: one of those jars has been eaten already!

A visit to the surreal world of Birmingham Car Boot Sale also happened: 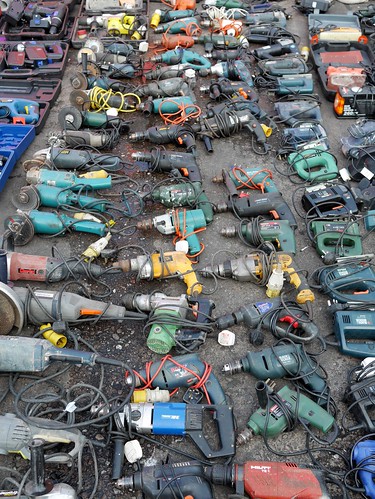 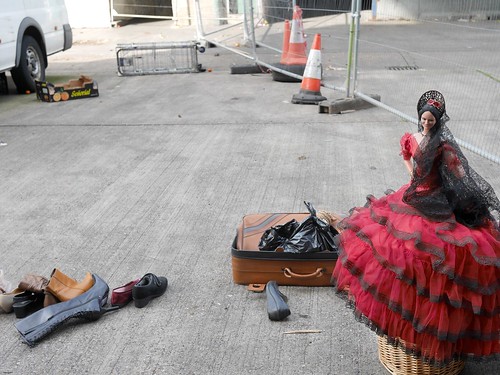 This week also saw the first Jewellery - Fashion Business event in the School of Jewellery, involving buyers from local and international companies and allowing students and graduates the chance to present their products. Surprisingly, this is the first collaboration between Jewellery and Fashion and it was really exciting to have it happen in the School. 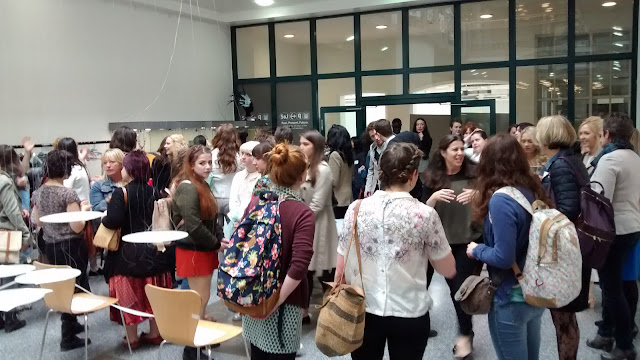 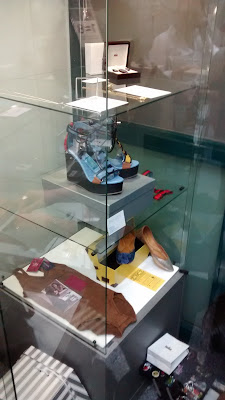 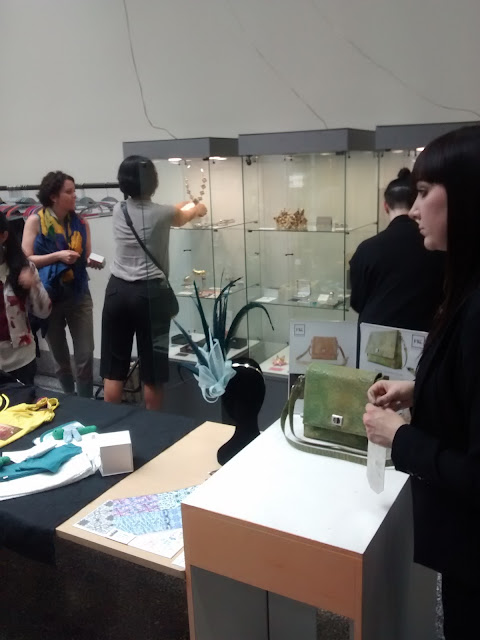 This week, Birmingham has been hosting the International Dance Festival. On Friday, I went to see Shun Ito's mesmeric installation in the Municipal Bank Building in town. 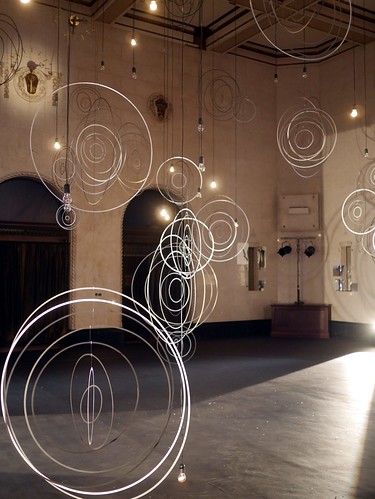 Shun Ito is included in the festival as he used to be a dancer and has since moved into metalsmithing and sculpture. The event was not only these sculptures, but later on, music and dance was added to it. The music was by Ex-Easter Island Head, playing tabletop guitars and bells and was utterly fantastic; a combination of drone-minimalism and the sort of melodic structures that made the Jesus and Mary Chain so great. 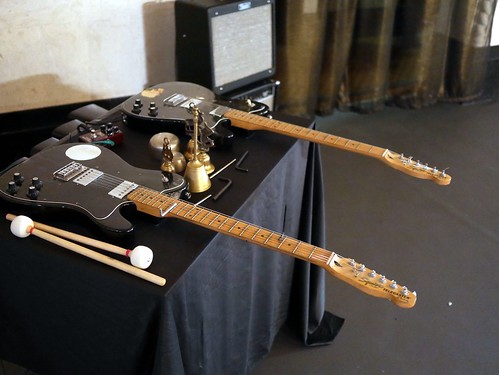 For me, it would have been enough to have sat and listened to the music and absorbed the hypnotic structures moving slowly in the ever-changing light but there was also a dance piece by Kei Miyata, who, along with a troupe of amateur dancers, performed a piece which I found dull, contrived, pretentious and annoying. That may, however, just have been me not getting it as one of my colleagues was moved to tears by the piece. 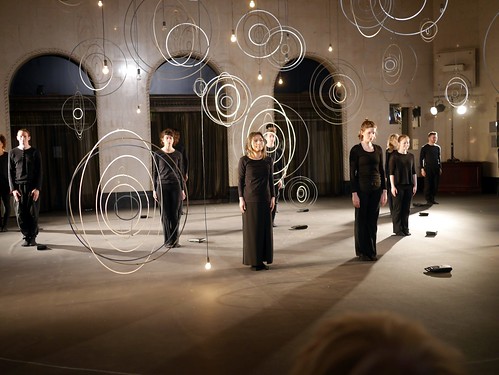 The highlight of the evening was the comment from a member of the audience that "I will be going back to Shropshire with my chakras completely rearranged", referring to the volume of the band!

After this, we all went over to Centenary Square for a quite different experience in the form of "The Machine Show", altogether more populist and accessible, featuring the French rock band "Rinôçérôse", Hip-Hop dancer, Salah Benlemqawanssa, Indian classical dancer, Aakash Odedra, and a host of others. Based loosely on a quote by Andy Warhol and stealing more than a little from Fritz Lang's "Metropolis", it was great fun and completely lacking in the wilful obscurity and pretentiousness I found in the earlier piece. 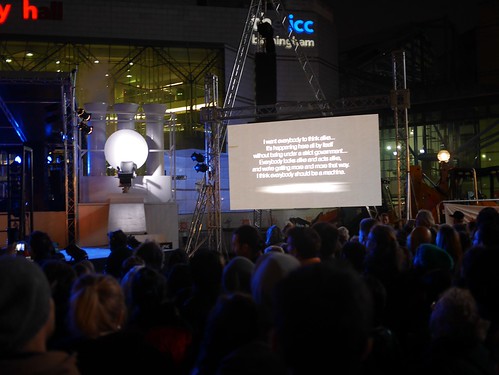 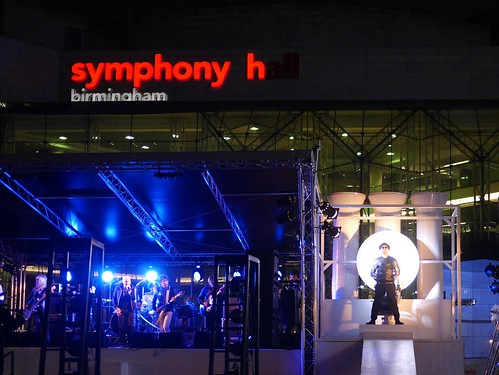 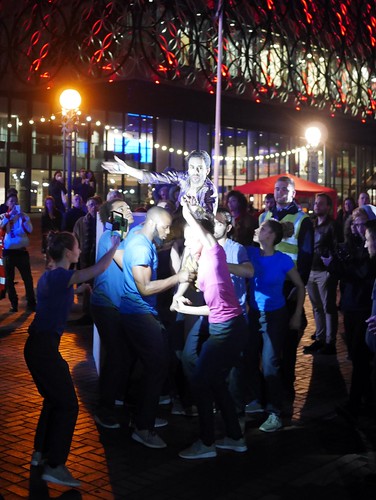 The rest of the weekend has been spent in the garden!