Brazil: an inside view 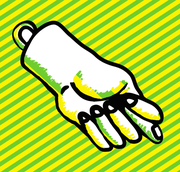 A showcase of the Brazilian jewellery scene, with comments about the not-so-well-known Brazilian culture.

After the Gray Area Symposium (Mexico, April 2010) I've been invited by crafthaus to talk about brazilian art jewellery in a blog.
In this blog, Ana Paula de Campos will also help me to give a overview of what is going on around here and also tell a bit about brazilian culture, that is very little known.

For my first blog post about Brazil, I've decided to tell the story of the FIGA. As I child it was a very common charm that many people wear. I always thought it has a connection with Umbanda, the religion brought to Brazil by the african slaves during colonial times. But amazingly in my researches I learned it most probably appeared in ancient Greece or Rome and it was used as a sexual amulet to enhance fertility. It could be seen in women's and children's necks. The thumb represented the penis penetrating the female organ ( the other two fingers). People at that time believed that wearing this pendant would keep them away of the risk of becoming infertile.

So the pendant/amulet was actually brought to Brazil by europeans. Here it acquired the status of a powerful amulet and became quickly incorporated. The folklorist Luis da Câmara Cascudo in his book, Dictionary of Brazilian Folklore, stated it is one of the most ancient amulets that repels bad energies and brings good luck. It is very much spread and here is strongly related to afro-brazilians traditions. It is a quite common expression "Faça figas" ("do the Figas") to say to a person wishing luck.

During the 40' the american artist Alexander Calder ( 1898-1976) came 3 times to Brazil and was very much influenced by our traditions. Among his very prolific production Calder also made around 500 wonderful pieces of jewelry. Some of them were his versions of the "Figa". He made around 20 of these and gave most of them as gifts. One of those Figas was sold in a Sotheby's Contemporary Art auction in 2006 for $60.000.
In references about Calder it is clear that he took this form from the Brazilian culture, during his trips to Brazil.
The FIGA started as a charm and some of them turned out to be works of art: being collected, sold not only based upon the amount of carats it holds. That's also my point of view. Jewellery is more than a dismissable acessory, it can be an art media just as any other media. It can add meaning and induce reflexion.
Today it is curious to find a St Martin's jewelry student, Alexandra Petsetakis choosing Calder's brooch as a favorite piece in a online magazine, but most of all , it is curious to read that she says the figa is "a timeless interpretation of the South American charm".
The legend continues to the extent of great exaggerations such as in this mexican website: "It has been many centuries, since a helper of Sir Anhul Hassen, discoverd 'A Figa', buried in the clay of an old tribal temple of the Coari area of Brazil. Since then, it has been handed down generations in families that want to preserve this secret that gives them the advantage over others to succeed." So I decided to use it as a symbol for the blog. It shows how one thing (more specifically a jewelry piece) that appeared first in Greece or Rome with one meaning, nowadays can be considered genuinely latin american/brazilian!
This is what we call here anthropophagy, a very much brazilian trademark concerning culture: we eat, we digest and we give the world something completely different. But that is a long story I wish I can tell in one of my future posts....

In the very first days of 2011, Brazil has changed its presidency.  I am not a person qualified to judge this last government in terms of its political and economical achievements, but one thing in…Continue

Brazilian artists in the Netherlands

Yesterday was the opening of an exhibition with brazilian jewelry artists in the Galerie Beeld & Aambeeld in Enschede, Netherlands.The curator, Nicole Uurbanus, born in the Netherlands but living…Continue

If in Amsterdam Art Jewelry is taught at an Art School such as Gerrit Rietveld and in Munich it is also taught at the Kunst Akademie, in Brazil we have jewelry classes squeezed among fashion or…Continue

A dialogue between drawing and jewellery

I have a tendency to make connections with other disciplines when I am looking at an Art-Jewelry piece. The points of connections with drawing and jewellery are particularly interesting for me. I've…Continue

You need to be a member of Brazil: an inside view to add comments!

Comment by Mirla Fernandes on May 21, 2010 at 8:54am
With amulets or without it, I think that is a lack of real spirituality in mankind these days...
I received last year the visit of some european artists as part of NOVAJOIA's program (check out http://www.njoia.com to know what NOVAJOIA is) and one of them was astonished with the presence of the spiritual side of us in our everydaylife. She mentioned that in Europe it is kind of forbidden territory, in the sense that it is not cool to mention you have a spiritual side. The mainstream occidental way of being is still very much rational. I have a feeling this is connected to the harsh Inquisition years. Religion has been identified with spirituality and they are not the same thing. The result is occidentals became radical in that sense, avoiding showing their intuition and anything else that could not be proved under statistic laws.But these are only my ideas and they are not really only about the jewellery field, so I will stop here...
Anyway I consider using amulets an individual decision that should be respected. And I invite you all to follow the next posting, of Ana Paula, which is a continuity of what I've started.

Comment by Mirla Fernandes on May 20, 2010 at 7:26pm
Hi Kevin,
I think this is a tricky way. It is very easy to engage into silly pieces if you just consider the magical side of it. The chalenge is to connect with something else related to our contemporary way of being/seing/believing, don't you think so?

Comment by Mirla Fernandes on May 11, 2010 at 7:28am
Dear Dionea,
You texts are so carefull, please keep commenting and enhancing our knowledge! bj

Good post to start with. It is a very interesting subject to bring up, since it shows that many things that have been interpreted as or 'became' jewellery were originally magical objects. The idea of ornamentation/accessory was not their primary purpose. So jewellery carries this continuous history of being a kind of inscription on the body.

The fig-sign is symbolic of female genitals, and it is supposed to bring good luck because it 'so preoccupies the evil spirit that it is distracted from its malevolent purpose' (see Desmond Morris, Body Guards: Protetive Amulets and Charms, p. 177). It is also interesting to note that the word 'figa' comes from 'fig' (in Italian fig is 'fico' and the colloquialism for the female genitalia is 'fica'). The allusion is obvious.

What is great is that in Brazil, because of the attachemnt to spiritual/religious/superstiton markers (I'm referring to all of this in a positive light), a 'charm' or piece of jewellery like the figa still carries so much force. And perhaps this is what makes good contemporary jewellery an art medium and not just an accessory: not just because of its form or meaning/discourse and, as you said, material worth, or whether it sells for a lot etc., but because it carries a force, it has an impact... what some may call an 'affective force'.

I am from Brazil and never had heard about Figa as a sexual amulet. I'm 51 now, and when I was child, my mom gave me one figa (like all moms) to protect us from disease, and bad luck. And, yes, the figa came with the slaves from Africa.

During the "Macumba" section, the "spirit" pray on the figa, and the people believe that this way, they are protected from all bad things.