Digital Craft was the fourth session of Craft Forward. This should have been a great topic.  I was looking forward to these presentations, but regrettably found disappointment.

The Digital Craft speakers were:

Cat Mazza - "Crafting the Grid" and

I have been debating with myself (i.e. somewhat tortured) about what to write regarding this session, hence my delayed post.  Should I skip the topic, say nothing bad, or hope no one notices? If this is your preference....please stop reading NOW! Summary of Digital Craft/Session 4
If you want to hear why it was a misstep for both the speakers and the Craft Forward Symposium organizers, ...then continue reading.  Perhaps there is something to learn, interpret or consider from the issues presented. The first problem with this last session of Saturday afternoon was that the speakers spoke faster and faster as the afternoon progressed. This made it harder for our saturated brains to absorb the information. Perhaps this "Speedy Alka-Seltzer" approach was an effort to energize the audience . . . but it was a complete disconnect between the speakers and the audience.

Next problem was the choice of speakers. So much is happening in this digital revolution and how digital media affects the world of craft and making, but the selected speakers seemed weak at best in relating the topic to the audience.  For example, Sheila Kennedy provided an outline at the beginning of her lecture and then never referred to it again.

I've reviewed my extensive notes carefully for both speakers and links are provided (at the bottom of this post) to some of the projects they mentioned.

While both speakers use digital media  (i.e. computers) to some extent in their work....their lectures addressed the use of digital craft superficially and really did not address the future of Digital Craft or any particular revelations to the audience. If I sound harsh, stop reading.  I think that I am being kind. I feel abused when a symposium and speakers of this caliber waste my time with  rah, rah, rah, community knitting projects of corporate logos or theoretical proposals for manufactured solar applications when the topic is Digital Craft.

What did I learn?

The Soft House by KVA Matx
in Germany

NEVER START YOUR LECTURE with a comment such as "I don't know why I was invited to speak at (insert name of symposium here)."  This totally destroys any presumed credibility that the audience may have afforded the speaker.  If you are ever invited to speak but wonder how you fit within the context of a program, think "wild card" or if you prefer, "wild flower." Think about walking through a forest or an ungroomed path and finding a flower all by itself, a treasured unexpected discovery. Your lecture can be just that, an unexpected yet treasured alternate perspective. Enjoy the moment and share with your audience.

Another important speaker lesson: Do not try to squeeze a 45-minute lecture into 30 minutes.  You are not in a race.  Your top priority is to connect and communicate with your audience. 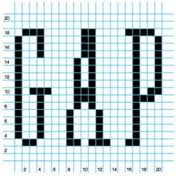 The first speaker was Cat Mazza, the founder of microRevolt, a web-based project that hosts knitPro, a free web application that translates digital images into knit, crochet, needlepoint, and cross-stitch patterns, which is used in over 100 countries. If you're interested in these media, perhaps you might want to look into the possibilities this program offers. This part of the lecture was informative, but unfortunately short lived. The second speaker, Sheila Kennedy, spoke about her "architectural" projects which were completely theoretical. Considering all the accolades on her web site for her leadership in the Integration of Technology and Design, this was not communicated to the Craft Forward audience. Now, after a great deal of research for this post, I understand why her lecture was such a disconnect with this Craft Forward audience. She re-used a lecture given at other symposiums for industry/architecture, etc.  It was not designed for this audience. No wonder why the audience was left quite confused.

In one example, she mentioned "Rhino" but didn't tell people what it was. (Answer: Rhino is computer software for designers/industrial designers that is relatively easy to use and less expensive than other CAD software.) This is no way to help your audience understand your process.

What were the thought provoking issues raised?
Both speakers did touch on two unrelated topics that seemed to recur unexpectedly during Craft Forward:
1) knitting
2) community.

My concern is that the future impact on craft media was not discussed.  For example, what could be the potential benefit of using knitPro on the future of knit, crochet, needlepoint, and cross-stitch patterns as craft media? Does it offer the possibility of more elaborate, sophisticated, complex or conceptually interesting work? We saw very few examples and were left with the impression that Knitpro is primarily used for grassroots projects.

One way or another, KNITTING kept popping up in the lectures at Craft Forward. There is more coming....you'll see. Several otherwise unrelated speakers showed examples of knitting. Why in the whole range of fiber as a medium did knitting rise up as a media or theme in several  presentations within the two days, I can not say.

Really, knitting? I have nothing against knitting, but why knitting at the exclusion of all other media. Yes, I understand that knitting  is the ultimate of D.I.Y. crafts. It has low entry costs, needs only two knitting needles as tools, can be learned in about 10 minutes, transports easily, can be picked up and put down at a moment's notice, and can fill hours with repetition. There are still more knitting projects to come from Craft Forward. Please explain this revival of knitting to me. The increasingly available knitting machines add yet another aspect to the making or production with little inspiration or thought, catering merely to utility or immediate gratification. Program your images with knitPro, let your body perform like a machine, . . . choose from a menu . . . superficial creativity, superficial making.  Wow! How Craft Forward can we get?

Another facet that I would like to expound upon is the rising focus on "community" as brought forward in these two lectures (and several other presentations). To be perfectly clear, I am a strong advocate for multiple spheres of community and activism, but I am questioning the apparent elevation that "group" making is implied to be superior to "individual" making.  I have personal experience with both approaches and may explore this concept further in a future post. Have you observed this phenomena?

Background about the speakers (below). Cat Mazza bio is available on the Craft Forward web site. Her resume is very impressive. Find more information about knitPro on microRevolt, a web-based project. Videos about microRevolt can be found here.

The web site for Sheila Kennedy is not very good and does not convey the significance of her projects to the general public. There are very few images, the images are in Flash, and most of the links only offer lists of text at best. A lot of the links don't offer anything at all.

Here are links to other projects which were mentioned by Sheila Kennedy. 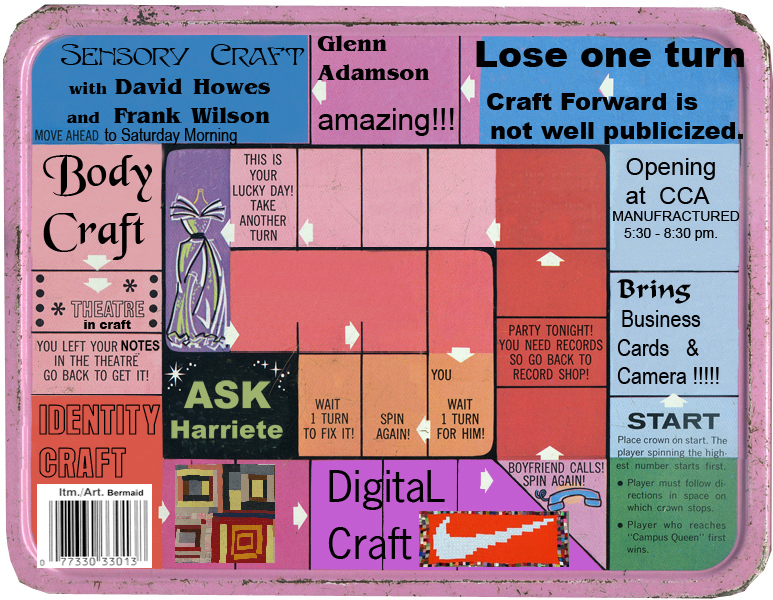 I very much appreciate your report on the symposium, and your candid responses.

I had considered attending this symposium, but practical issues would have made it a stressful endeavor-and after reading the subjects and some research on the presenters I decided it would likely annoy me and thus not be worth the stress. Many of the questions and disappointments you express on the superficial relevancy of some presentations (not on the quality of the presenters work), and the emphasis on 'forward' -as some idea of progress or vanguard -being attributed to currently trendy ART Cred activities over issues more distinctly related to craft practices were what I anticipated experiencing.

None-the-less, - it did stimulate your responses which are some good topics for consideration.

It seems- What is "Craft Forward" is still the question.

Thanks for your thoughtful reportage.

Thanks for your responses.

Your right in every respect.

AT the time of the Conference, I was completely in "neutral" just taking it in and keeping extensive notes. Now as I review the presenters lectures, I am a little disappointed on occasion that the symposium lost an opportunity to address what Craft Forward could mean in a more substantive manner.

What is "Craft Forward" is still the question.