A little over a year ago I found myself rummaging through the remains of a pile of old, tangled, broken trash jewellery, donated by a local charity and left over from a program of events that ran concurrent with an exhibition I had just organized. Some colleagues, drawn by the twinkling sparkle of paste and plastic and unable to resist the urge to rummage, soon joined me.

Memories emerged and were shared as the tattered jewels were untangled, a single earring, a diamante owl brooch missing one eye, some wooden rosary beads, all invoked a story of their own; a summer holiday, a favorite aunt, playing in a grandmother’s house. Slowly, some beads disappeared to be re-stung and re-painted, a backless brooch was made functional again, the process of sharing memories rejuvenated this junk jewellery, breathing life back into it. We are collecting broken, discarded JUNK jewellery, as individuals and through the process of partnering with charities and their charity shops. We are aiming to collect a very large pile of broken ‘jewels’. Our project, Junk: rubbish to gold, is taking place over the course of one week, it will see this ‘junk’ transformed into ‘new’ jewellery by a large number of jewellers in all stages of their careers, from students to recent graduates to lecturers all with the involvement of an audience.

JUNK: rubbish to gold seeks to put the entire process of creating the ‘work of art’ on display, from material selection to (re)construction, the focus shifted from the object to the social interactions that usually hide behind it. The performance is a playful exploration of ideas of community economies and activities of exchange, bartering, gathering, earning, harvesting and giving.

When we think of re-using, we imagine the up-cycling of consumer leftovers into a new and desirable luxury and consumable. Recycling sees conversion of one object to another, ideally from unwanted to desired, but mostly in terms of new consumer product ready to buy. We see the before and the after – what that object was, what it has now become. 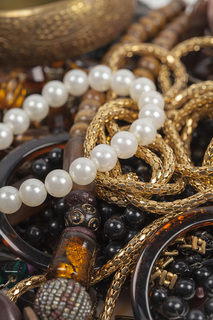 Indeed within jewellery this form of re-use has been the cornerstone of the discipline, as precious metals are re-melted and reformed and gemstones retrieved and reset, materials shift form to adapt to the newest fashion and trends. Yet the re-imagining of one object into another is usually infinitely more complex then it is often portrayed. It is more than an object before and after. This junk jewellery, now a rich source of material awaiting a new life was itself once material re-imagined.
And as boundaries between material and object are blurred, this project seeks to put on display this re-imagining and how it arises out of a myriad of complex intentions and social interactions, from gathering, selection and (re)construction.

We have a venue:
The School of Jewellery celebrates it’s 125th anniversary in 2015 and JUNK: rubbish to gold will be an exciting part of the celebrations.

We have dates:
JUNK: rubbish to gold will begin with a weeklong live performance (which will be streamed online during the whole process), from the 9th-13th November 2015.
The performance will be followed by a two-week exhibition at the School of Jewellery and online exhibition from the 19th November until the 4th of December. The project will culminate with a Silent Auction with winners being announced after the Closing Party on the 4th of December.

What we need:
Performers:
A key part of this performance is, of course, the performers; who will be asked to give their time and skills over the course of the week. These performers will be jewellers new and established who will work in the gallery space, interacting with the public and staff and students of the University as they select items of JUNK jewellery which they then, in collaboration with the other performers re-imagine and (re)construct from trash in to objects of desire.
Sources of JUNK Jewellery:
For this project to work we need as much JUNK jewellery as we can possible get. It is our aim to partner with a large variety of local and national charities and to collect all of their broken and unserviceable jewellery. In exchange, 50% of the sales from the Silent Auction will be given to the partnering charities (the other 50% will go towards basic costs of running the project and future incarnations in new and exciting venues). Additionally we will very soon launch a Kickstarter fund as a means to help gather JUNK jewellery from around the world (in exchange for one of the art pieces created during the project).

Reaching out:
This project aims to reach out beyond it’s venue at the School of Jewellery right across the world, to share (and gather) stories generated by the JUNK jewellery and re-imagined art pieces.

Facebook, Twitter and Blogs will be actively used during the run up to this project to weave together stories from across the world. The performance itself will be live streamed online and the resulting exhibition will be shown online as well as at the School of Jewellery, enabling everyone to place a bid via silent auction for the pieces on show.

Now, we need YOUR help!

Please vote for our project; although we have many plans, these cannot be realized without funding, this grant will help make this project a reality.

CLICK TO VOTE for the "Rubbish to Gold" project !