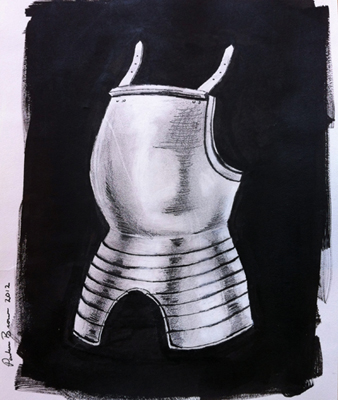 One of the most commonly posed questions I receive is, “how do you make a piece of armour?” This simple question is neither easily nor readily answered. Like so many craft disciplines, armoursmithing is a technically driven process.  Each step in the piece’s creation is dependant on another.  However, as my blog audience, I will endeavor to walk you through a project currently underway for a client so a better understanding of that basic question can be given!

Like most of my pieces, the design begins with a historical original.  This particular piece, a breastplate, dates from ca.1495. The armour was owned by a German, Kunst Schott von Hellingen, a Franconian knight who served as a mercenary in the multiple private wars ranging in Southern Germany at the end of the 15th century. The armour itself was likely made by one of the celebrated armourers of Nuremburg.  Out of these workshops came not only some of the finest examples of the craft, but two simple inventions we still use today: the slotted head screw and the flat head screwdriver! Schott von Hellingen’s harness (as full suits were referred to) was created at a unique time in armour evolution.  Up to this point, German armour was characterized by the Gothic style, exemplified by finely fluted surfaces that reinforced the thin plates of steel comprising their harnesses. One full suit of German Gothic armour in the Wallace Collection weighs only 52 lbs. total.  But the production of these suits required greater labor than the competing round surfaced armours from Italy.  Schott von Hellingen’s armour was part of the answer: a new style referred today as German Transitional. 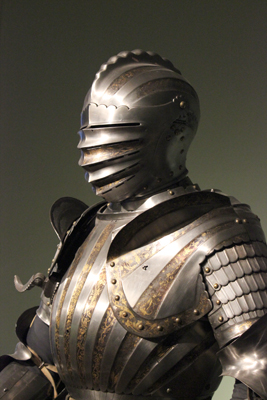 The Kunst Schott von Hellingen armour is one of only two homogeneous suits existing today that belong to the Transitional German style.   Its transitional nature stems from the changes in German armour during the turn of the 16thcentury from the fluted Gothic style to the eventual Maximillian style named after Holy Roman Emperor, Maximillian I.  The result was a rounded style reinforced by fluting that resulted in an intimidating and impressive display of technical and artistic achievement.

As a transitional piece, the von Hellingen armour presents some technical challenges.  While most armour has a variety of examples to draw from for inspiration, the von Hellingen is a rare example, so greater research than usual had to be conducted for the client if the armour was to be functional and historically accurate.  While most metal artists must concern themselves with aesthetics and function, this is paramount for an armourer.  Though some of my pieces end up in gallery openings, most receive their harshest critiques on the field at sword point.

Parker, when you say "one of only two homogeneous suits existing today that belong to the Transitional German style." You are talking about them being all original parts right, instead of patch worked together? If this is the case, how many museums have the wrong types of armour put together? So are there any Brontosaurus like suits? Ones that we were convinced were legit that more research proved otherwise?

1) Dinosaurs didn't wear armour because the awesomeness of that would have imploded the universe.

2) I would say the majority of armour suits shown in museums are a mixture of similar pieces.  Full suits comprised of all original parts are extremely rare.  A famous case of mis-matched armour is the Avant Armour at the Kelvingrove Museum in Glasgow, Scottland
http://collections.glasgowmuseums.com/starobject.html?oid=395798

It is one of the most complete examples of Milanese armour, but the helmet shown with it does not belong to the rest of the armour.  Although the helmet (a barbute) would have been contemporary, the original suit would have used a heavier and more technically advanced helmet, known as an "armet".  Here's an illustration of what the full suit likely looked like originally:
http://i4.photobucket.com/albums/y110/Nephtys/Miscellaneous/Real_Fi...