If you attended SOFA New York this past April, chances are you noticed there was something interesting  happening  at Sienna Gallery.  If not, you may have read something about it online, maybe AJF’s blog or right here on Crafthaus.  Perhaps, though, it found you, snaking its way into your periphery via your Facebook “newsfeed”.

The Opulent Project’s Costume Costume was presented in a section of Sienna’s space at SOFA, essentially in an adjacent micro-gallery.  Inside, the work was presented minimally and for good reason, as the work was intended to be tried on with abandon.  The shelves lining the walls served more the purpose of a resting place between bouts of adornment than display. The far end of the space was outfitted with a photo booth functioning as the lynchpin of their efforts—to document the interaction between participant and jewelry.  Once captured, images were then dispersed threefold: as printed souvenir to be share firsthand, displayed onsite via a monitor so to entice new accomplices passing by, and most effectively, uploaded to Sienna Gallery’s Facebook page.

I became enamored with the excitement surrounding Costume Costume and spoke to Erin Gardner, organizer of the event, to learn more about the goals of the project.

Erin cofounded The Opulent Project with Meg Drinkwater in 2006 while both were undergraduate students at the University of Oregon.  After relocating to Portland, they’ve since reached out to other emerging jewelers to create themed bodies of work with the goal of using “collective power to generate interest and ultimately be collected, worn and woven into contemporary material culture.”  In addition to Costume Costume—which had a previous incarnation in Portland and plans for more in the future—The Opulent Project has also curated and organized exhibitions under the name 18K Gold Tone, and most recently hosted the Gallery Reject event in their studio. 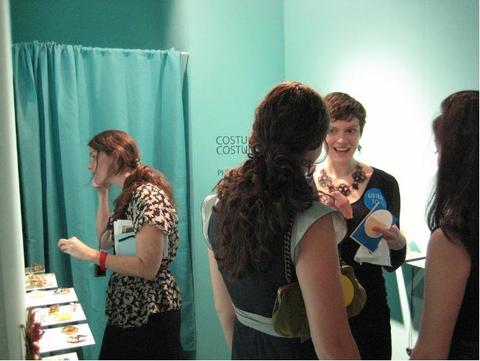 Costume Costume came out of several projects Meg and I were working on in collaboration and independently.  We were drawn to costume jewelry because of our interest in objects that exist as simulations of unattainable luxury items.  Several months ago Sienna asked me to organize a project for SOFA NY and this seemed like the perfect opportunity to expand on Costume Costume.  I presented this project to several emerging contemporary art jewelers to address the current trend to re-consume material culture, and to question the nature of costume jewelry. Walking through the rows of booths at SOFA, I was first made aware of something peculiar happening at Sienna Gallery by the cloud of excited chatter and gesticulation hanging in the air; the cynical Brooklynite in me thought:

“Ok, what are these people so happy about?”

It may seem strange to think so, but this sustained level of happiness was out of place at SOFA. It was due, not to some intrinsic sadness, but to its nature as a sensensory rather than emotional experience. The sensory-emotional connection in the display (marketing?) of art jewelry is a worthwhile topic that deserves—and is in need of—attention, but cannot be properly explored in the confines of this discourse.  In passing, the happiness Costume Costume participants expressed can be attributed to key components: nostalgia for the photo booth and its association with celebratory times and exciting locales, being given control of their interaction with the jewelry and selecting pieces to self-identify with, and gaining ownership of their experience through the photo strips documenting the event.﻿

In addition to being handmade in limited edition, all the work in Costume Costume was priced under $400.  Erin points out: “We acknowledge the gap between art and consumer-based jewelry and seek to produce idea-based jewelry that is accessible to a broad audience.  We strive to produce work that can transcend mainstream preconceptions regarding jewelry and that generate discussion for both the informed and uninformed viewer.”

By creating work and presenting it through modes that address both the Who and Why of their audience, The Opulent Project approaches the subject of exhibiting contemporary art jewelry qualitatively.  As a part of SOFA, Costume Costume engaged both the internal and external audience firsthand and made use of social media (Facebook, Flicker) to access the hyperexternal realm.  But what if the booth was installed just outside SOFA on the Park Avenue sidewalk, or even a busier place like Columbus Circle, within shadow’s reach of MAD; how might location affect the methods, materials, and prices participating artists might choose?

An interesting development takes place in their most recent project, Come Apart, at Heidi Lowe Gallery:  “The work in this show explores various forms of fragmentation visually, physically and/or conceptually.  Wallpaper is the second collaborative piece produced by Meg Drinkwater and Erin Gardner that explores adornment related to the body and interior space. The viewer is invited to participate by pulling jewelry from the wall to adorn themselves while at the same time revealing a pattern in the negative space that remains.”

Not only is the viewer invited to interact with the jewelry, but in doing so, leaves evidence of the act and permanently alters the experience for all who come after.

A new edition of Costume Costume is on view until Aug.31st at Sienna Gallery in Lenox, MA. www.siennagallery.com   For more info about Come Apart, visit www.heidilowejewelry.com

To learn more about The Opulent Project and their plans visit:  www.theopulentproject.com