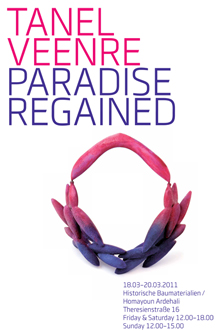 The sheer act of taking the jewelry out of the gallery, and into the immense space of the world is enough to engage the hyperexternal audience. The quickest route would entail a literal spillage of jewelry onto the streets, creating a spectacle in the process.  Such blunt actions may garner attention, and certainly have their use, but do they serve the work as well?

Estonian jeweler Tanel Veenre likes the challenge of exhibiting in difficult spaces, predominantly those with high ceilings: “It’s like directing a play—when I am telling the story I have to make the viewer believe in it; there is a crucial role in the atmosphere I create.”

In bringing his exhibition Paradise Regained to Munich during Schmuck, he knew he wanted some kind of antique environment to complement his work but struggled to find the right place.

It was really hard to find the place via long distance—I met a lot of incredulity and narrow minds on the way…After all it was a lucky chance that I ended up in this historic building materials shop by Homayoun Ardehali.  I have a friend—talented jeweler Doerthe Fuchs—living in Munich and then she got an idea to introduce me to Homayoun. 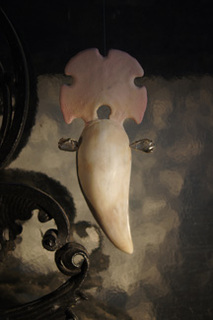 The historic building materials shop was just as it sounds.  The small, wondrous, space had all manner of ornate and antique building materials, and standing there within it, I couldn’t help but feel as though I was breathing time.  The most prominent fixture, a large iron-and-glass set of gates, became Tanel’s gates of paradise.  The work hung from the gates and was simply, but seductively, lit.

The colorful, plump, and youthful forms seemed to colonize the weathered, somewhat wizened objects, and shared a similar visual language; it was as if the soul of this old salvage had been reborn—in concentrated and wearable form—through Tanel’s hands.

Other pieces adorned great wooden doors resting against the walls of a small alcove.  One piece even appeared to mimic the doors hardware, as if it found itself there accidently and had morphed into something less suspect.

Tanel could have brought these antique gates and doors out of their element and into the gallery, but they would lose their authenticity, severing contemporary jewelry’s tenuous connection to the outside world.

There’s no doubt that Homayoun’s shop held great potential, but not just any body of work could integrate  so successfully.  Tanel held an idea of what he wanted going into his search, and once he found it he thought of himself: “like jelly, taking the form of the environment, not vice versa.”  He succeeds in the context of the shop due to it’s ability to support not only his aesthetic, but also his conceptual interests.  And there, in that space, they belong to each other in equal measure.

[pictured below- Of the spaces Tanel has chosen to exhibit within, his favorite was a 100-year-old storage house that came with the challenge of ceilings 15 meters high and 500 square meters of space.] For more info and images from Paradise Regained as well as other exhibitions and interesting installations,
Please visit Tanel’s website: www.tanelveenre.com     Tanel can also be found on Klimt02