Getting the clay conversation going...

Getting started again after a break can be a challenge. Whether it  is after a day or a month, sometimes it just seems that I don't know where to begin. One thing that works for me is to say that the only requirement is that I go in the clay studio and close the door. I tell myself that if I can't find anything to do there, I can leave. That's never happened.

There are times where it's clear how to pick up where I left off. At other times, whether after a long absence or after a flurry of activity, there's no clear path, and I start by putting things away. Often I come across something that's an idea waiting for its moment--some castoff springs that should be used in a sculpture, tiles that I bought when my niece wanted to try painting on tile. At other times, I'll be reminded of a problem that I've never solved completely to my satisfaction.  It all comes back to staring at that blank sheet of paper, that empty canvas, that lump of clay and making your first move.

I went to a talk the other day by Austin Kleon, a guy who creates blackout poetry http://www.austinkleon.com/newspaper-blackout-poems. He started making these poems as a way to overcome writer's block, and now it's a way of working for him. One thing that interested me was that he said that writing is just putting one word after another; if you keep adding, you'll end up with something, he said, and then he described his method of subtraction.

To get started on a poem, he chooses some words in a newspaper article (or two newspaper articles side by side). Then he plays with those words until he's got something going and starts blacking out all the rest. It's all a matter of knowing where to begin. Here's the poem I made. In case it's hard to read, it says:

Now what? think about

and a puzzled gentleman 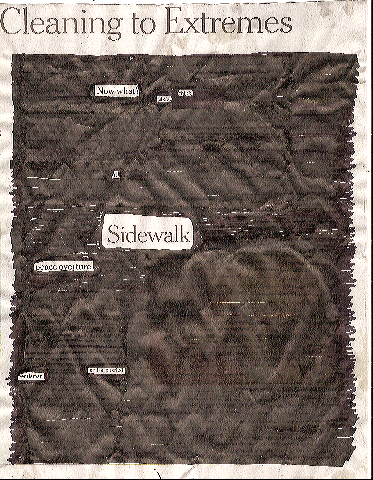 Not much, but it's a start. Let us know what you do to get going.

Permalink Reply by Desiree on August 29, 2010 at 2:41pm
I live by Nike's "Just do it". There's no arguing, no hanging around waiting for inspiration - Just DO it. It works. The best way for me to get into things when I arrive at the studio, is to make a few small pinchpots. It helps me to relax and to get into a rhythm and the right mindset. They mostly go into the recycle bin - no regrets as they've served their purpose - but some are little gems ending up on the for sale shelve.