Howdy fellow crafthausers and kinetic enthusiasts! I apologize for my brief hiatus from adding to this blog, I was putting the finishing touches on a solo show and had family in town to distract me. Now that we are back on track I am extremely proud to introduce our second of many Contemporary Kinetic Craftspeople; Gary Schott of San Antonio, Texas.

With a rare ability to ceremoniously combine humor, precision mechanics, and fine art concepts, Schott’s creative work has raised the bar for a new generation of makers. As the following interview will attest, Gary makes art with a conviction to produce objects that comment on functionality (real or faux) while maintaining top drawer formal qualities fit for a textbook on contemporary sculpture. His intimate jewelry pieces are fun and engaging with a dash of improvisational narrative thrown in for the whimsical wearer to ad-lib if the mood should strike.

After receiving his MFA from University of Illinois at Urbana-Champaign, Gary was the winner of the prestigious LEAP Award in 2009 from The Society of Contemporary Craft and he hasn’t looked back since! Winning a Juror’s Award in Craft Texas 2010 Gary has continued to produce on the highest of professional and artistic levels. He is currently the Chair of Metals Department at the Southwest School of Art & Craft and he is a proud new first-time father! So please enjoy the following conversation with Gary Schott!

Q: Where does your infatuation with kinetics come from? Do you remember a specific experience that sparked your interest?

A: Although I’ve always been fascinated with taking things apart and trying to observe how they work, I do remember the moment a seed was planted in my mind about kinetics. In my 3D design course taught by Tim Alberg, we were assigned an automata/mechanical sculpture project. We were shown automata artist Keith Newstead’s video of his work and basics of mechanisms and told to make our own automata sculpture. From that point onward I was hooked. However, it took close to four years later, while I was in graduate school, for that interest to resurface and set the direction that my current work follows. 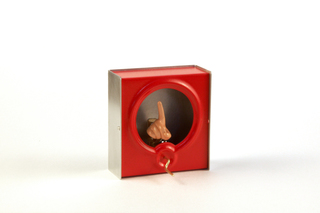 Q: Could you speak a bit about the intimate nature of your work? Can you recall any unexpected reactions from people who have encountered it on that intimate level?

A: One of my many fascinations is the relationships we form with objects within our daily lives; most of which are utilitarian but also exhibit a degree of aesthetic engineering (hopefully an enjoyable one). The fact that my sculptural objects are interactive is a method to further blur the line between art object/design object/utilitarian object. The eskimo kisser series began as an attempt to create a functional device that interacts with a viewer but its sole function to is create a silly, artful, and intimate moment.

The element of plaything also factors into my thought process, as I notice that a lot of the “utilitarian” objects in our lives really are more of an adult toy (meant in a non-erotic manner). On one hand they do not provide a basic means for survival, but on the other hand, they do provide emotional comfort. My wearable playthings are really just an extension of all this. After all, jewelry, by its very nature, is interactive. 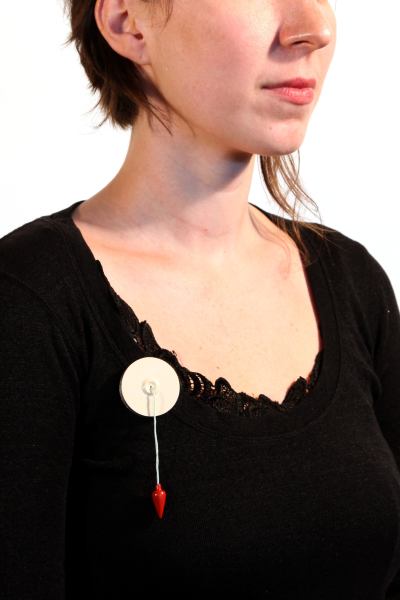 Q: Do you use different thought processes when designing wearable pieces versus something that is purely sculptural?

A: I touched a bit on that above, but one of the biggest differences is the engineering. Like my sculptural works, I give a lot of thought to function and it’s performance and that includes wearability. Although it may not be every-day wearable, I do give plenty of attention to how it will be worn, weight, materials, etc.  I feel that this amount of engineering helps to reinforce the reference of a device/utilitarian object/toy.

Q: With the inevitable complications that come with kinetic work do you find yourself redesigning mechanisms as you begin to fabricate?

A: Yes! However, I do not redesign as much as you may think. I put a lot of time into initially sketching out my ideas and then progressing to a 3D model; sometimes of an entire piece and other times just one mechanism. This helps to eliminate as much waste of material as possible. Also, it’s just faster to figure out a lot of mechanisms in materials like matt board, wood, plastic, etc. Having said that usually it’s not that the mechanisms are not working but having to rethink its interactive nature and how well will it hold up to being used.

Q: How does your teaching position at the Southwest School of Art influence your studio practice? What kind of challenges do you face teaching students kinetics?

A:  I think that teaching is something that tells you a lot about yourself and what you believe in. Sometimes it’s hard to know exactly what you believe in until you find yourself in front of a group of students waiting for you to tell them. Although I do not push kinetic work onto my students (unless that’s the class topic) I believe that my approach to my art helps to inform my teaching philosophies and my students are always indirectly helping me to  re-consider teaching strategies and my studio work.  It’s really a two-way street.  Even if I was a full-time studio artist, I would seek out opportunities to teach workshops because there’s always someone that sees your work from a slightly different perspective (for better or worse).

Q: What can we expect from your future studio projects? Will kinetics continue to play a major role in your practice?

A: I definitely want to keep playing with kinetics for a while.  I have so many ideas and not nearly enough time to explore all of them. However, I gave up trying to predict the future long ago. 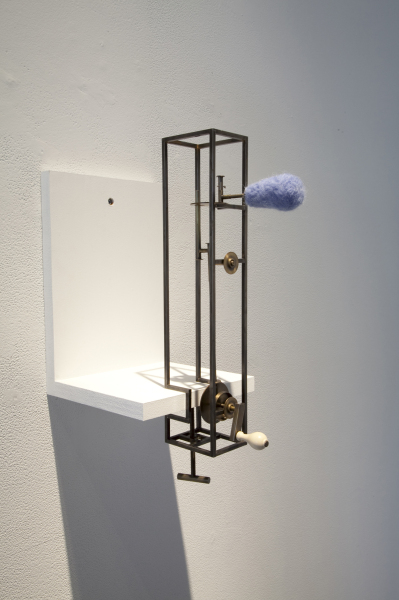 Right now, I hope to find time to continue exploring the eskimo kisser series for just a bit longer.  I have explored with models of mechanisms that I feel really work well for the creation of an eskimo kiss motion.  The idea of two or more users with one eskimo kisser machine really intrigues me, also.   At the same time, my wife and I are about to begin the adventure of first-time parents and I’m predicting that working in the smaller scale of wearable playthings may work better with my adjustments to fatherhood.  The two plumb bob brooches I’ve done recently feel like they could be the beginning of a fun body of work, with endless variety.

And then there’s my anticipated future collaboration with the UK-based company, Laikingland.  As of now, it’s planned that I will work with the co-founders to design a prototype of a kinetic sculptural object that they will then create into a limited production. I’ve always been the sole creator with my work and I look forward to this new version of being a maker/designer/artist.

Whatever projects I undertake in the future, I’m sure they’ll somehow fall under my current motto, “I design and create interactive moments.”

A:  Kinetics and mechanical motion is like any field of study and requires lots of practice.  I found in the beginning that realizing even the contemporary artists I look up to are using versions of mechanisms that have been around for thousands of years really helped me understand that I didn’t need to reinvent the wheel. Rather, learn the language first.  If you haven’t grasped the basics of something simple like levers, then it’s going to be hard to move forward.  Having said that, my learning process was predominantly from looking through books and making models (a lot of them fail initially).  You don’t need to have a formal background in mechanical engineering.  Instead, also focus on tweaking the relationship between the kinetic motion you envision and the harsh reality of the properties of materials.  For example, having a lot of silver-soldered copper mechanisms might not be such a great idea because it will be really soft (tumbling with steel shot only gets it so hard) and the mechanism may not stand up to the abuse of kinetic movement.

Having said that there is something really rewarding about cobbling together a construction on your workbench and watching as you pull a lever or crank a handle on one side and some terrific motion is being created on the other end.  I really love the cause-and-effect relationship of kinetics.

Gary’s work can be seen on his website: http://web.me.com/garyschott/garyschott/HOME.html

Or his Crafthaus page: https://crafthaus.ning.com/profile/GarySchott

Thank you to Gary for taking time out of his busy schedule of professorship and fatherhood to answer my questions and have a wonderful conversation.  Enjoy all!