What is it About a Toy?

What is it about a toy? For children the toy represents an escape to another world, an object

which can transcend reality. Adults often look at toys as novelties, nostalgic tchotchkes that belong in a plastic storage container in a child’s closet. I myself had a large collection of those robots that changed into vehicles. What were they called again? Thinking back on my connection to those toy robots, it was always the kinetics that fascinated me the most. I would spend hours transforming my collection into and out of their alternate forms, forsaking the epic battle-royale I had set up on the dining room table.

For many contemporary artists the concept of play is a major component in the creative process. Exploring and creating new worlds is a significant consequence of using the imagination. For most, kinetic toys act as conduits for world conception; they make it easier for the user to expand the imaginary world by giving it a feeling of concrete reality. The kinetic artist infuses objects with this validity by giving the viewer an experience they have not come to expect; the experience of authenticity. 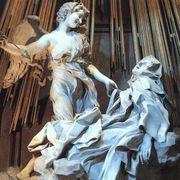 In your lifetime how many figurative sculptures have you seen that provide a convincing sense of actual motion? The traditions of western art have given us the non-kinetic artifices of contraposto and implied movement. These ruses, though genius and necessary in their own right leave the human mind wanting more. The popularity of motion pictures is a testament to this complex part of the human psyche. What kind of history would be written if Bernini’s The Ecstacy of St Teresa moved before our eyes? Her robe writhing as the cherub strikes her with his golden arrow.

The ancient Egyptians wanted more from their figural objects… or at least their children did.  This figurine of a peasant kneading dough incorporates simple axles through the hips and shoulders.

When the child pulls the string the figure animates. This same kind of modest apparatus is reminiscent of the simple mechanisms employed by the metalsmith and stop-motion armature designer Miel-Margarita Paredes, in particular her animal pull toy collection made with pewter and copper. Paredes’ kinetic work contains elements of anatomical accuracy combined with a hint of mutilation and indentured servitude. The animals appear to be slaves to their own kinesthetic physiology despite the obvious “toyness” of the work. One gets the feeling that these characters did not choose the reciprocal nature of their motions but through the reassembly of their bodies they are awarded another lease on life, as demonstrated below by Hopping Bunny Push Toy. In addition to kinetic toys relying on the drive of levers and chords the ancient Egyptian culture developed some of the earliest board games in the world; notably the games of Senet and Tjau. The ivory game box at left was carved from a single block and is one of the four complete sets found in the tomb of King Tutankhamun. It consists of a sliding drawer holding a number of pawn-like pieces. One side of the box contains the playing field for Senet while the other contains the board for Tjau (shown).

The precise gameplay of Senet is up for debate but scholars do know that it required the use of both luck and skill. The word “senet” means “pass” and players would use strategy to block their opponents from making moves.  This direct manipulation of and interaction with the object is something we all take for granted today. A kinetic action has consequences no matter how trivial.

Metalsmith Nathan Dube’s work is reminiscent of the simple board games and toys that continue to be some of the most popular in our society. Taking pages from both adolescent frivolity and the contemporary reliance on technology, Dube affords the viewer a nostalgic sense of calm in a world overloaded with texts, emails, and tweets. In the below image, his piece PLBA (Personal Light Bright Assistant) reminds one of the time-eradicating video games we carry around in our pockets, (Angry Birds anyone?) He accomplishes this while taking us through a short time-warp to an age just before the digital revolution, an age when you actually had to grab a game piece in your fingers to move it, an age when “Ctrl + Z” did not exist. Kinetic toys and games hold sway in the contemporary art world. Their appeal goes beyond their mechanical intricacies and into the realm of the psychological. In a world without toys, would there be any artists?  Or is it the other way around?

Thanks to Miel and Nathan for the permission to use their images!

What is it about a toy? one that moves. It is an interesting topic. It is said that "play" is the "work" of a child. Just try to call a child to the dinner table while he is about to finish a lego creation and you'll see how important play is to a child. I think it was in an article by Bruce Metcalf, that referred to how strongly working with ones hands is connected to the human learning ablility. So perhaps the artists brain is hardwired in an enhanced way that drives us to want to work with our hands and create. I had a strong connection to toys as a child: My Grandfather was a maker. I watched him make toys and all sorts of whirly gigs. The ones that had moveable parts were my favorite. I'm pretty sure you would be interested in this article by Bruce Metcalf.  So maybe as long as there are toys - there will be artists.