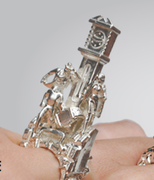 For the next 13 months we'll discuss the trials, triumphs, and tribulations of exhibiting  in art shows as emerging artists and established artists. Exhibition coverage will be balanced with tips on how to strategically build a legacy over a length of time, in a way that makes sense to your individual goals as an artist.

Join us each month! There will be surprises around every corner, with photos, videos, SNAG conference coverage, and occasional interviews by rising artists! 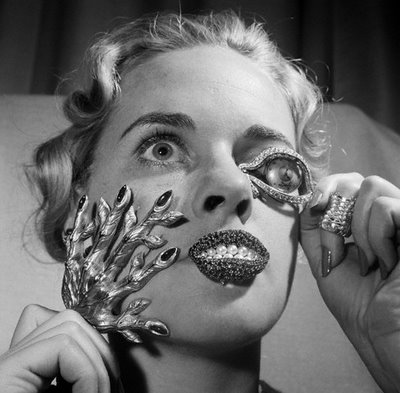 Last weekend, Spoke Art Gallery in San Francisco brought together some of the best international contemporary paper artists for a group show cleverly named "Paper Cuts." The exhibition's curator, Jessica Ross, kindly shared some insight behind the works themselves, the inspiration of the show, and the role paper art and fine craft plays in the big picture of fine art._____________RR: As described, "Largely seen as a style of craft art, Paper Cuts seeks to investigate the intersection between…Continue

Art Palm Beach entered it's 17th year this January, promising to showcase the biggest blending of fine and applied disciplines of art yet. I just stepped out of the vast expanse that is the Palm Beach Convention Center, and am compelled to happily share the very large fine craft presence on view this weekend! This blog post is mostly pictures than text, in order to emphasize and give full credit to, the incredible amount of jewelry, glass, and ceramics showing among paintings and sculpture.…Continue

Another facet of the Showing Publicly portion of the blog, The Curatorial Eye, allows me to share the inside scoop behind the scenes of putting together a nationwide exhibition. This week I was able to interview Ellen Schinderman, founder and curator of the annual exhibition "Stitch Fetish II." "Stitch Fetish II," held every February at The Hive Gallery & Studios in downtown Los Angeles, continues to explore the art of the stitch, revealing the fetishized secrets lurking in the minds of…Continue

Building a Legacy Privately: In Search of Lost Time / The Artist's Procrastination

Who hasn’t fallen victim to one’s own hubris with the clock? Errors await, obstacles sneak in, and before you know it, the midnight deadline has passed, and after a quiet “Damn it” spoken to yourself, you swear you’ll never cut it that close to the wire again. But you do. We all do.We procrastinate on starting projects, fulfilling deadlines, and try our hardest to cram it all in during the 11th hour. Procrastination handicaps our progress, hurts our performance, sabotages our goals, and blocks…Continue

Want to submit to international shows but don't know where to start? During the SNAG Conference segment: "Purple Cow, Sacred Cow, Cash Cow" the speakers discussed that by thinking differently in our field, you can set yourself ahead of the rest of the pack. Not only were attendees encouraged to think outside the norm in regards to finding, getting, and capitalizing on opportunities ranging from galleries to magazines, the speakers practically handed over the key formulas to attendees in order…Continue

Building A Legacy Privately: As I Lay Dying

Imagine your biggest dream. Now imagine a bigger one, really allowing yourself to release the ceilings of your imagination. Look beyond your own existence, beyond your own life, beyond money and fame, and flirt with the big picture of your art however you define it.Look beyond this generation, or however many years you believe you have left on this planet, and think: What will your art have left the world? Consider that your creations, your pieces, will outlast you in years, and that your art…Continue

I regularly attend Art Basel Miami Beach held in South Beach every December, but this year I was presented with a highly unusual opportunity to attend Art Basel 44 in Basel, Switzerland. It was an opportunity I couldn't pass up, and thought to myself, I can share this worldwide event with the crafthaus community! (For those unaware of the glory that is Art Basel, check out this link: https://www.artbasel.com/en/Basel ) This Art Basel 44 post, as…Continue

You need to be a member of Showing Publicly and Building a Legacy Privately to add comments!

Hi Rebecca. I'm like Steve Shelby: I don't do shows where you go and peddle your wares from a booth. The exhibitions I've been in are held in art museums and galleries. (Rebecca, we actually were in the same exhibit "Fabricated" at the Target Gallery). My main concern is: I'd like to know WHY I'm not selected. I'd like to learn from the experience. Is it the artwork in itself, is it the pictures, ... ? Only in 1 occasion did the jury send me their observation (apparently I was one of the last to be "dumped") which I really appreciated.

PS: sorry we didn't meet at the SNAG conference

Hi Rebecca. I have had probably a 50% success rate entering juried exhibitions, which I think is actually pretty good. I don't do shows where you go and peddle your wares from a booth. The exhibitions I've been in are held in art museums and galleries. I have always been able to get into local shows in nearby Fort Wayne. There is almost no competition for my type of media there, and they are only advertised locally. In other small venues I've entered, though, I have struck out, probably because they are small galleries that only have room for 40-50 works, and because they advertise nationally, they get hundreds of entrants. I have had good luck with a couple big shows, Craft Forms 2010 (Wayne Arts Center, Wayne PA), and Craft Forms 2012 (I entered in 2011, but didn't get in); CU29: Copper in the Arts, 2012, Mesa, AZ, and 34th Annual Contemporary Crafts, 2013, MCA Museum, Mesa, AZ. The last one is my biggest success so far; I won a cash prize, and the grand prize, a solo show in 2014. I was also in a narrow niche exhibition for funerary urns, "Ashes to Art" in Graton, CA, 2010-2012, and not quite as narrow, "Forged", at Torpedo Factory Art Center, Alexandria, VA, 2012. There is a pattern here. All the exhibitions I have gotten into have been for 3D craft of one kind or another. That's interesting, in light of your post above about "Bridgism". I have always suspected that jurying was a very subjective and arbitrary thing. A few months ago I got to find out first-hand, being on the jury for a local exhibition. Each submission was projected onto a screen for about ten seconds, and had to be judged up or down in that time. I know my decisions were not that well thought out.

Hi Steve welcome to the group! Been sifting through the SNAG conference pictures and info to compile entries for this week, for those who didn't have the chance to attend -in the meantime, thanks for your patience. I'd love to hear your experiences regarding what types of shows you're entering, which types of venues the shows are held at, and what the themes of the shows were, if you'd like to share!

This looks like it could be interesting; one of my favorite topics. Not much happening so far. I have been entering exhibitions for the last 3-4 years with success and failure. It's a difficult thing to figure out.

Glad to hear that, John, the bi-monthly topics will be chock full of info that I hope everyone can benefit from- thanks for your interest and blog involvement!