Work and Life in England - An American View 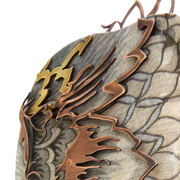 England explored through the eyes of an expat American jeweller

"Work and Life in England- An American View"

[please see "Discussion Forum" below for the most recent posts]

Group Information
I'm an American jewellery designer who moved to England to get a Masters degree in Jewellery and Silversmithing and plans to stay in the UK, working as an independent designer. For my Masters I chose to research ways to use plaster as a main material in jewellery production, with quite successful results. This is a behind-the-scenes look at the projects I'm currently working on that explore jewellery techniques and processes that can be applied to a material other than metal, as well as a cultural blog: England through the eyes of an American artist. Bio
Miriam Rowe completed her BFA in Jewelry and Metalworking at the University of Georgia in the United States in May 2009. Even though she wasn’t planning to go to graduate school until she had been away from the academic world for several years, Life had other plans and September 2009 found Miriam in the United Kingdom, beginning her Masters in Jewellery at the largest School of Jewellery in Europe. With the Masters at Birmingham’s School of Jewellery finishing in September 2010, it’s anyone’s guess what will happen next, but this blog will be documenting what happens as Miriam takes her place as a graduate designer in a new country.

Every year up til this one, Christmastime has been a chance for me to go back to Georgia and see the family- I'd spend the holiday eating lots of food, watching all of the Lord of the Rings extended…Continue

It's Been An Insane Month

FLUX Exhibiton at the MAC in Birmingham Has it really been almost a whole month since the last time I wrote?…Continue

You need to be a member of Work and Life in England - An American View to add comments!

Comment by Miriam Rowe on August 18, 2010 at 2:28pm
Wish you could come to the show too- we'll be following last year's lead and posting an e-catalogue after the show opening, so keep your eyes open for that!
I'm going to be applying for a post-study visa and staying in the UK- thanks to the MA I've made loads of good connections in Bham and I feel like it'd be a waste to move away now! What made you decide to go back to Canada, if you don't mind me asking?

Comment by Rickson on August 15, 2010 at 9:31pm
I wish I was still in the UK to come to your show! Good luck, it will be amazing I am sure. Are you returning to North America? Or staying in England?

Comment by Miriam Rowe on August 15, 2010 at 4:36pm
Very nice :)
It'd be really great to organise some sort of Crafthaus gathering in London in the near future- in the meantime, if you fancy getting out of the city, it'd be great to see some Crafthaus'ers at our MA Private View on 11 September at the School of Jewellery in Birmingham! See the newest discussion for more details, or message me if you're interested in finding out more. It really would be great to see you there!

Comment by Catherine Marche on July 19, 2010 at 3:40pm
I came to London for le love ... my phone bills, train and plane tickets from Paris were becoming super expensive :)
Now married, 2 young boys

To CM- How long have you been in London? What brought you there?

To CCG- How was the residency at Bishopsland? And what will you be doing in London? (And how is the visa thing working for you? I wasn't allowed into the country unless I was a student and am now only allowed to stay in the UK because I've got a degree from a UK institution)

Comment by Catherine Marche on July 19, 2010 at 5:48am
see you soon in london Catherine