Crafthaus Editor: Moving on to the selling aspect. You have your work at Charlie Cummings’s gallery in Florida. How did that connection come about?

Richard Peterson: [Laughs] I bugged the gallery. I knew that he had a cup show at his gallery and I loved that cup show. Every year, I waited for it to start because it is the perfect mix of established artists and up-and-comers. So exciting. I never had money to buy anything, but I would use it as a reference. I figured out who the curator was one year and I emailed her asking if I could possibly be in that show. Nothing happened for a while, then she emailed me back saying that yes, I could be in the show, but that she needed my work shipped the following week already. It was her way of saying "yes, but not really", you know what I mean?

The next year, I did the same thing, but I was prepared this time. I had five cups ready and set aside, just in case they said yes. Well, I got in the show that year and sent my mugs to the gallery. That was the biggest stage that I had ever put myself on and, lucky for me, it went really well, better than I could have ever imagined. Two of the pieces sold to private collectors the day before the opening, and the other three cups sold within the first week the exhibition was up. I was one of the first artists to sell all of their work in the cup show, and shortly after my last cup sold I received a call from the gallery requesting a solo show of my work. So that was how that happened. It was by a little bit of crying, and a little bit of putting myself out there, and sending images to people. Crafthaus Editor: As a way to support yourself, do you think you will be able to continue to work with this gallery through grad school or do you have to put this on hold for a while?

Richard Peterson: I have had conversations with the gallery about that already. I don't want to stop working with them, but I might have to put this on hold temporarily.

In addition to what I did with the Charlie Cummings Gallery, I also had another solo show during my last semester with the AKAR Gallery called “yunomi”, and I did the Baltimore Clay Works “Graphic Clay” show, as well as completing my final semester at school. There was so much going on and it was all so exciting to have all of it happen at once, but it was also really terrifying. I was wondering all the time if I could really pull this off, because if I didn't get it done it would reflect badly on me. 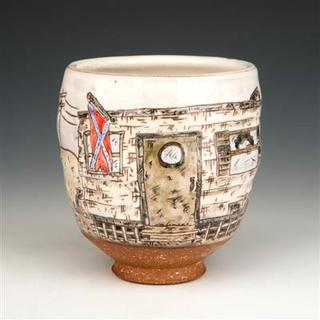 All of a sudden, all kinds of people wanted my work. It was my last semester at school and I did no experimentation, none. I was so focused on making work that was presentable, and work that wouldn't fail in the process, because if I failed, that was a week that I had to make up later somehow. It was really scary. There was one time the kiln didn't reach temperature. Everything came out foggy and I had a panic attack. I re-fired everything and it was all good in the end, but that isn't always the case. It could have been a whole kiln load of work gone. Just gone. 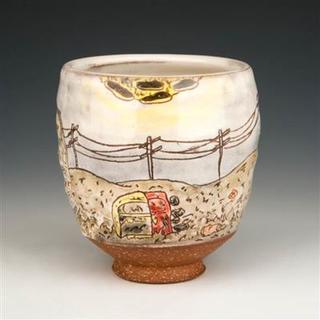 I still want to do shows. That is why I'm here. You make work so that people can see it, hopefully. But in the future, I will have to be more selective about what I say yes to. The Charlie Cummings cup shows, those I will probably always do, because it is only five pieces they are asking for, and there’s a lot of people who will see it. Those are really important shows to continually be a part of. And it’s part of my history too. That’s an important relationship to me.

Crafthaus Editor: Charlie Cummings seems to be quite active online doing a lot of promotion for their artists.

Richard Peterson: He does. That is another thing I like about them, if I have any questions or I have any problems, they are willing to help me out. I think that is one of the best things about this gallery. I haven't worked with tons of galleries yet, I am still really early in this process, but they had such a positive influence on me already that if they asked me for something and I have it, I will send it to them first. 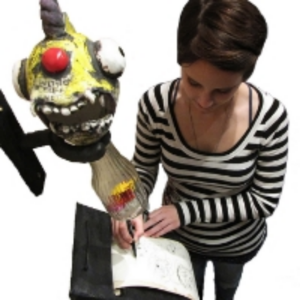 That is also one of the things Jill Foote-Hutton mentions in one of her articles on “Musing about Mud”. She writes about the relationship between the gallery and the maker. By the way, that was one of the most influential articles I have read in a while. It really changed a lot of things for me. Shortly after I read her article, I actually curated a show myself. I talked a gallery space in Akron, OH into taking no commission on any clay work sold at my show, so that everything that we sold went 100% back to the artists. It was great. We had over 65 cups in the exhibition and all but 8 of them sold. It was a local show, no online presence. It was also the first time this area has had that much clay on view. Crafthaus Editor: How did the gallery make any money? How did you talk them into this? They need to make money off of their sales to keep their doors open.

Richard Peterson: The place I did the show with is called “Land of Plenty” in Akron. The owner is Christy Wall. You walk into this place and it has all these oddities, taxidermy, weird wood sculptures, old antiques, mass produced pots and stuff like that, and it is really lovely and it is super hip. She has a client base that is already looking for unusual items. 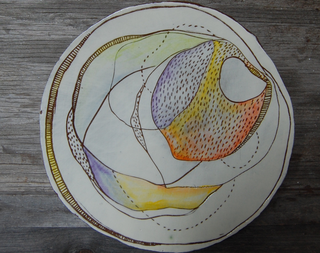 I found the place through one of my friends from Akron, Jamie Suvak. The University of Akron encourages you to have your senior thesis exhibition off campus. You need to find your own gallery space, set up a solo show yourself. That way you also learn how to communicate with a gallery.

Jamie had her thesis show at Christy's place and it was an amazing turnout. My friend sold many of her pots and Christy sold a lot of her work inside the shop too. It brought in new customers for Christy, people that wouldn't have visited the shop had it not been for the show. After this success, Christy asked me if we could set up a show next and because this happened just a few weeks after I had read Hutton's post, it was all still fresh my mind and I was feeling really, really bold that day. So I said that I would do the show at her place, but that there was to be no commission, that everything had to go back to the artists. Christy agreed.

It took me six months to get everything up and running because I am not the best writer in the world. I was constantly writing and rewriting the invitations to the show, talking with lots of people about how to best do this because I really had no experience with organizing a show like that to begin with. It took me a long time, but I finally got to the point that I was able to create this opportunity for my community. I was very happy and very scared at the same time. How do I prevent this show from flopping? Will I look like an idiot? Will it be successful? Well, the show turned out great. I had a wonderful response from many amazing ceramicists who put their trust in me to do a great show. I have since been asked for a round two at Christy’s but I am just not up for it right now. I have to leave for Arkansas soon.

Continue reading the next segment: "I Admire"