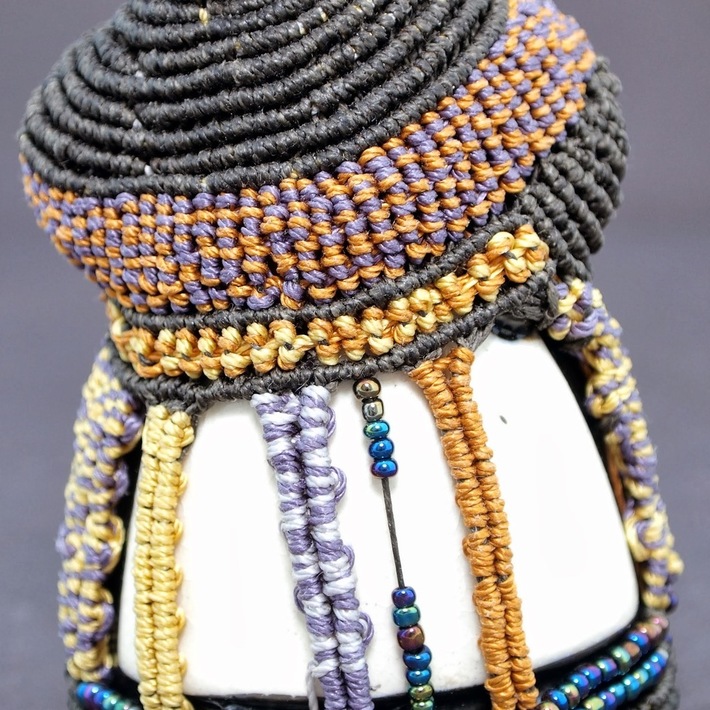 Where do you live ? City, State and Country
Eureka California

I am a .... Example: Student, Maker, Educator, etc.
Work as Fiber Artist

Thanks for the invite

Brigitte, thanks for the invite to join this amazing group of artist. I have posted some images from a show I had about a year ago. It was the first time I had been able to show so many of my works in one exhibit. There were about 70 works installed, most of them on a large table that was built for the exhibit and covered with small stones. Then the curators of the gallery took my work and created an environment with my work. It was exciting for me to see my works in a totally different environment. I was used to seeing them in a timeline according to the when the works were completed but this jumbled everything up time wise. It became a small community of works with different sculptures interacting with each other. It was fun to talk to the installers of the show and find out why they put different works together.

I have also worked on a number of collaborative works over the last few years with other person in the Los Angeles area that created knotted sculptures and some of those can be seen on my Flickr site. Norman

Thanks for signing up again with crafthaus. Your active membership is valid through April 15, 2018.
Now that you’ve successfully re-registered you can get even more involved. This means, you’re not just getting the whole crafthaus picture... you are a part of it. Your contributions via blogs, photos, and discussions will enrich our open crafthaus environment immensely, so please let us know what’s going on in your art life! Don't hold back!
If there are ever any questions or concerns, don't hesitate to email me via crafthauseditor at live dot com, I will do my best to be of help.
Thanks for being a crafthaus member!

Leisa Rich said…
Thanks for replying and your comment about my Installations...

Melissa Vogley Woods said…
Hello Norman! Thanks so much! I fell in LOVE with the little character It is from Sunbonnet Sue quilts and use the image in most of my work. all the best! M

Kay Taylor said…
Norman,
We were just overnight in your fair city. Discovered "Old Town" for the first time of the many trips/overnights through Eureka. Can you believe it?!! Nonetheless, your work is terrific. Was your show (your photos) in Arcata? Not sure where the HSU gallery is, but will look for it next time we visit Eureka. Congratulations on being showcased on Crafthaus!

Alison B. Antelman said…
Hi there,
I was on crafthaus the site when I noticed an ad for YES on prop 8 (in california). I wrote an email to the founder and realize she may not know who advertises on the site. Prop 8 is offensive and discriminatory-should she allow ads for the nazi party or child porno? I encourage all of you to email Brigite Martin-educating her on this problem. The ad says that prop 8 "supports marriage rights, protect traditional marriage" we all know what it means, any %$@#*! straight couple can get hitched but a couple who have shared their lives for 25 + years through family, illness, happiness and death can't be called a family by our government. Any straight couple can get married after knowing one another for a minute but a true family, those who have spent their lives together can't get the same -federal-rights.

Please email Brigitte and let her know that this ad is on crafthaus-It does not represent my opinions, beliefs, and morals, Let her know what you think. Brigitte Martin, LUKE & ELOY, Gallery Director
Editor, www.crafthaus.ning.com


Please send her an email now.
thanks,
alison

Welcome to crafthaus ! I am glad you joined us and made your way over here from Luke & Eloy Gallery.

There is always a lot of activity on the site, so it would be great if you could upload some images of your phantastic work for all of us to see. When you do so, please upload the pictures via the PHOTO link on the main webpage. That way your images appear in the main slide show and on your personal page. Thank you.

Also, please feel free to add your comments to the blog/discussion topics that are already posted. Of course, if there is something else you'd much rather talk about, please add that to the site so that the rest of us can chime in.

I really hope you will enjoy being with this network and find the exchanges interesting and fun. The more you put into it, the more you will get out of it, for sure.

If there are ever any questions or concerns, please don't hesitate to email me anytime. I will do my best to be of help.