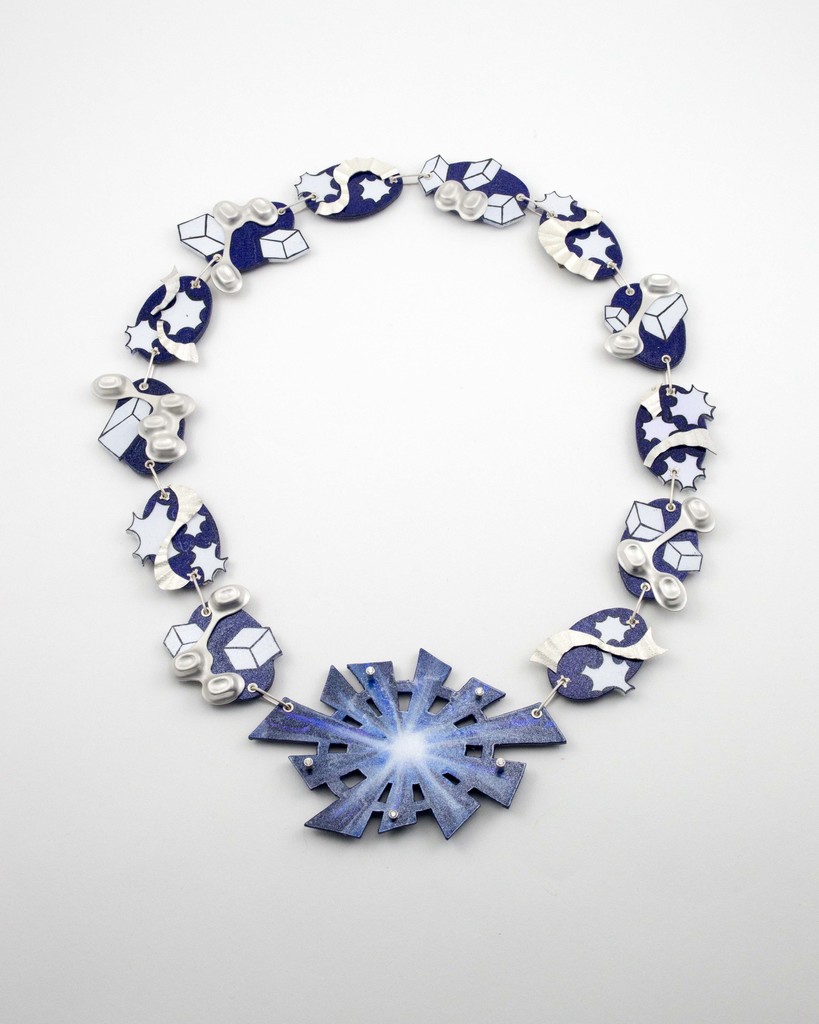 A temporary, transatlantic, creative partnership between Poppy Porter and myself sprang up for the purpose of generating a piece of wearable art for the Crafthaus Co-Operation:Garnish project.  The project is a traveling, juried exhibition that called for makers with very different working sensibilities to pair and cooperate on a piece. Poppy is an Abstract Artist/Jeweler based in the United Kingdom who I approached from a list of interested parties.

Our response to the theme of Co-Operation:Garnish is based on the structure of two specific songs and how they played their part in communications history. We have taken the rhythm and bassline to be the foundation and the melody and vocals to be the “garnish”.  One artist works with the foundation the other works with the garnish.   The two songs were written either to be transmitted by or in praise of the first communications satellites, thus starting a communications revolution that makes our co-operation and collaboration possible.

Poppy and I have very different styles of working. Poppy is synesthetic, and has a visual response to music and sound that resembles a colorful, abstract animation.  She takes her inspiration for her jewelry and painting from the drawings generated while listening to music.  Poppy uses a variety of techniques and materials to make jewelry, usually creating or finding a form that will be painted using automotive custom painting techniques.

We were strangers at the beginning of the process and to date have never met or spoken in real time.  In fact, as Poppy made her half first, it is possible that she will never see the finished piece in person! The entire project was conducted and made possible in the time available via social media and email.  The constraints of time and distance focused the making process considerably.

This transatlantic communication sparked the idea for the piece.  We decided they wanted to work with music to use Poppy's synesthesia.  I suggested we use “All You Need Is Love” by the Beatles which was commissioned by the BBC for the first live global television transmission  in June 1967 and Poppy suggested “Telstar” by The Tornadoes, a 1962 instrumental piece about Telstar, the first communications satellite.

They decided to look at the structure of the music and use that to reflect the theme of “Garnish”.  Poppy (a bassist among other things) began by laying down the groove.  Creating the foundation of the piece by responding to the rhythmic structure and basslines of both songs.  It was agreed that I would then look at the melody and vocals to “garnish” the foundation.

Poppy listened, looked and drew several abstracts for each song.  The main color of the basslines for both songs was purple with distinct white shapes superimposed over the top, cubes for “Telstar” and star shapes for “All You Need Is Love.  There would be twelve purple ovals, six with white cubes and six with white stars to represent each song.  There was also a very sci-fi sound effect at the beginning and end of “Telstar” clearly meant to represent the satellite itself. This was a very dominant shape and Poppy decided to include it as a central motif with the ovals coming out from it as if they were the transmissions. She airbrushed these abstract shapes on to pierced out aluminum composite panel using automotive custom painting techniques for vibrant colors, adding a little stardust for sparkle at the end.  Each piece was designed to be elements that I could arrange in any way I wanted once I was working on the necklace.

As teleportation is a thing of the future there was an anxious wait for the UK and US postal services. I received the elements and respond to Poppy's groove with my own interpretations of the melody and vocals to "garnish" the foundation. Although I had made a variety of abstract sketches based on the impressions of both pieces of music, my elements were also considerably changed as a result of Poppy’s painted imagery. Not wanting my elements to obscure too much of the white painted forms jumping off of the painted ovals, I strove to position my complimentary elements around the baseline-inspired pieces, creating a harmony. I was further inspired by Poppy’s sparkle finish to include fine light-catching textures on her dimensional garnishments.

The success of the piece comes from the conscientious merging of the disparate strengths of each contributor. The merging of Poppy’s colorful approach with my dimensional methods has resulted in a fun and wearable necklace. It is a fitting expression of international communication, representing the cordial and encouraging working relationship that developed between two strangers.