Back to the UK Home again after not only a calm and uneventful flight but also an easy and uninterrupted drive around the normally appalling M25! Unfortunately, we arrived back in time for the annual Brighton "Gay Pride" event, which we always aim to avoid as the town is just too busy and too noisy for that weekend. (I also have a grumbling thing about "I remember in 1985, being spat at by striking miners...", memories of when Pride rallies were fiery, political events, not loud, drunken excuses for 'camping it up'! Just ignore me, like when your grandad goes on about the war.)

Anyway, the upshot of that was that we decided to head off to Essex for the weekend, taking full advantage of the wonderful warm weather. A quick trip to the internet and we had booked our accommodation and set off on a not-so-amenable M25. I really loathe that road. It just blocks up all the time, unless you are travelling in the early morning or late at night. When we finally arrived, we decided to look at the church at Fingringhoe - yes, that is a real place-name - which is a quite lovely little Norman church: And which contained some dubiously earnest "crafts" for us to enjoy... We had lunch in the churchyard and it was so warm I fell asleep! Dingo cannot be trusted with my camera. Whenever I leave it with him, I come back to find odd photographs on it, such as this one.

Essex is really the home of what is known pejoratively as the "little-Englanders", the politically conservative, probably racist but definitely xenophobic, homophobic and strangely anti-government types who vote for idiots like our current Prime Minister, David Cameron: the sort of people to whom Cameron is appealing with his censorship of the internet in the UK. I didn't much like our next stop on the trip - Maldon... There is something so very "Daily Mail" about this! (I did like Stephen Fry's observation last week that the Daily Mail "still can’t quite live with the shame that it has always, always been historically wrong about everything - large and small - from Picasso to equal pay for women" and let us not forget their championing of Hitler...)

Maldon is a very pretty town with a waterfront on the Thames estuary. It is also very, very dull. It has a boring church with incredibly rude people working in it, some pubs and a horribly crowded waterfront. The only thing which stood out was the great cafe we found in which we ate an excellent breakfast.

The following week was back in Brighton, preparing for the sad journey - the M25 again - home to glasgow.

Back in the workshop again where I found that the painters were in and painting. I got them to leave all the furniture out so that I could re-order the workshops which felt like a mistake when it looked like this: I used the time while they were painting to organise my gemstone collection. I was quite surprised to realise how many stones I have bought over the years but not until now have I bothered to catalogue them in any way. The decision to do this came before the holiday when I made the surprise discovery of a box of tourmaline crystals in my safe: 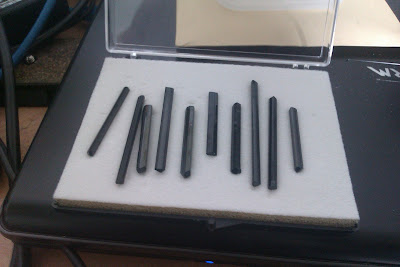 I honestly don't remember buying these and have no idea where they came from. I know that they are mine as there was a label on the bottom with my name and the price of each crystal on it! It is good to be able to say that this won't happen again as I've now boxed and catalogued every stone I own. I also took the opportunity to catalogue all the amazing objects people have made for me, such as Lisa Stevens' ceramic elements; By the time I had finished, it was time to go back to the workshop and tidy it, ready for action tomorrow morning: