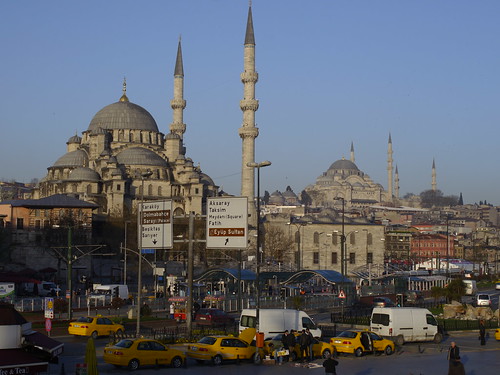 I had a wonderful time in Istanbul when I visited in 2013. Now, four years later, it seems that I may never be able to return again. The liberal, secular country created by Atatürk is succumbing to the power-plays of the fascist Erdoğan, already praised and congratulated by fellow fascist Trump and courted by our own vile authoritarian dullard, May in her desperate attempt to find anyone who will trade with the UK after it foolishly leaves the EU (and that includes murderous tyrants such as Duterte in the Philippines). Erdoğan was in power when I was there - two weeks later came the uprising against him in Taksim Square (the Gezi Park protests), rapidly crushed, his rise to power completed yesterday when a referendum gave slim support to convert the Turkish democracy into - effectively - a dictatorship which supports the death penalty, the creation of a theocracy (Islamic, such is the hypocrisy of Trump) and the effective dissolution of parliamentary democracy.

Today, it seems that our own - unelected - Prime Minister, May is so out of her depth that she seeks to squander precious time on having a general election when she should be negotiating with the EU - the very thing she spoke against doing. More hypocrisy. This is not a political move but a time-wasting one from a government which has no idea at all about how to proceed with the political, economic and cultural suicide that is "Brexit". There is absolutely no need for an election now - she has a fairly secure majority in the House of Commons, an utterly hapless Labour opposition and the only real opposition coming from the Liberal Democrats, the Scottish Nationalists and the others (95 seats in total, less than half the alleged official opposition). This is yet another distraction, right up there with her unfounded complaints that Cadbury had dropped the word "Easter" from their chocolate eggs. (They hadn't, but they had promised not to move production from the UK, which they then did: not a word from Ms. May.) The difference is that complaining about a made-up story costs nothing. In 2014, the cost of elections came to £150 million. 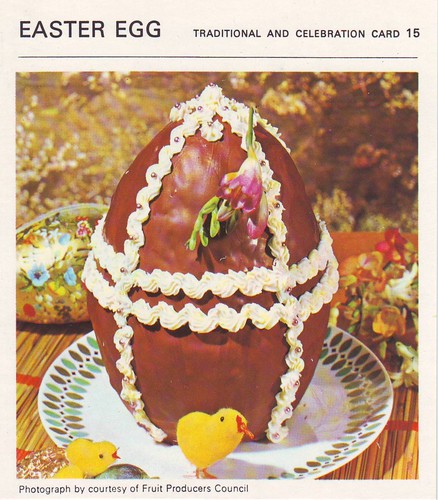 If there were going to be a general election - and let us not forget that May herself said no fewer than five times since she seized power that she wouldn't call a general election - it should have been held immediately after the result of the idiotic referendum (which, as you will recall, I believe should never have been called in the first place). This general election is effectively the same as Erdoğan achieved with his idiotic referendum yesterday: she will win with a majority in the House of Commons (and probably a minority of the vote, rather as happened in the 2015 election where the tories "won" on 37% of the vote or 24% of the electorate - the Electoral Reform Society have a rather good PDF about this here). This will give her the power to do exactly as she pleases in the next five years, including crashing out of the EU with no deal, ditching the Human Rights act, scrapping employee rights, creating a low-tax economy for the super-rich and dismantling the welfare state, including the NHS. Oh, and probably war with Spain.

Still, we may not make it to June 4th if the p****** contest between the swaggering cocks in power in North Korea and the USA have their way. 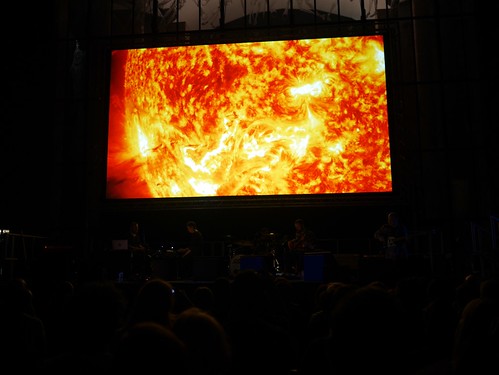 I've been on holiday for the last 10 days, hence no post. Before I went on holiday, it was a pleasure to hear Simon Bliss speaking at one of our "Talking Practice" lectures on the subject of how jewellery is represented in photography and film. 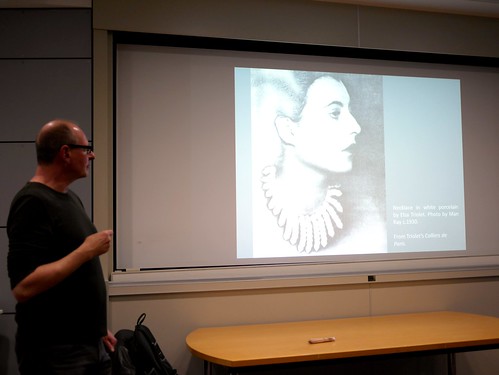 A very interesting talk in advance of his forthcoming book on the same subject. 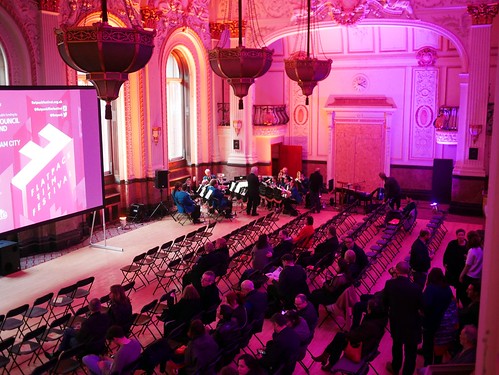 Also on the subject of film, I was privileged to be able to go to the opening of the "Flatpack" film festival which was a celebration of the work of Segundo de Chomón,  a film maker from the end of the 1800s through to the 1920s who not only pioneered early cinema but also was highly influential in his use of special effects, creating little surrealist masterpieces of great charm and wit. It is hard to imagine how audiences would have 'read' these films, but from from the point of view of a sophisticated cinema-goer, they are quite amazing and their influence can be felt in the works of many of my favourite film-makers, most notably Jan Švankmajer and the Quay brothers.

As can be seen from the image above, the event was held in a very odd setting: the semi-derelict "Grand Hotel" on Colmore Row in Birmingham, so it was an evening of urban exploration as well as one of cinema. It was also very, very cold! 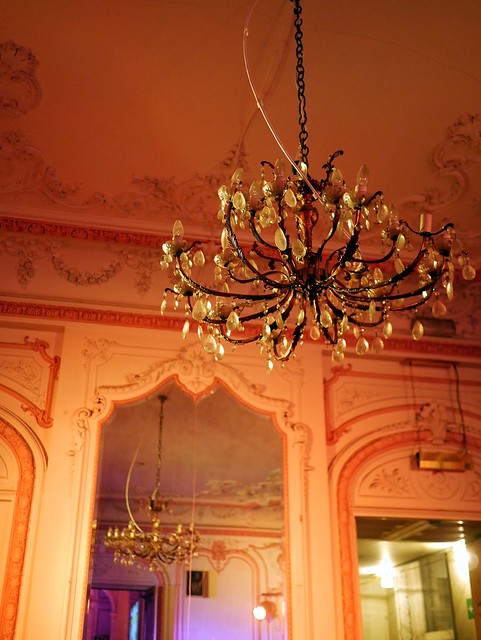 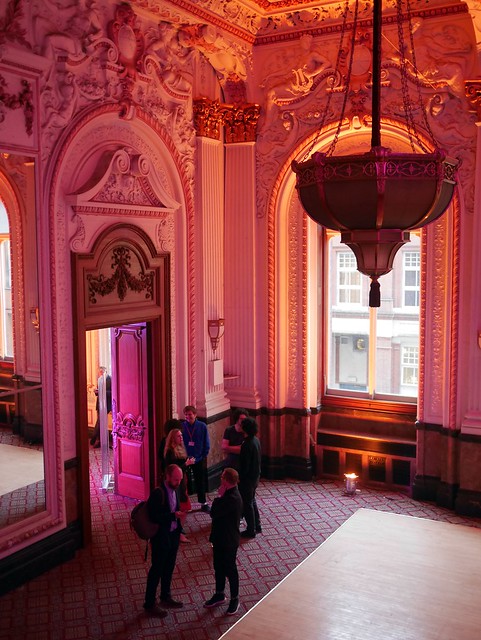 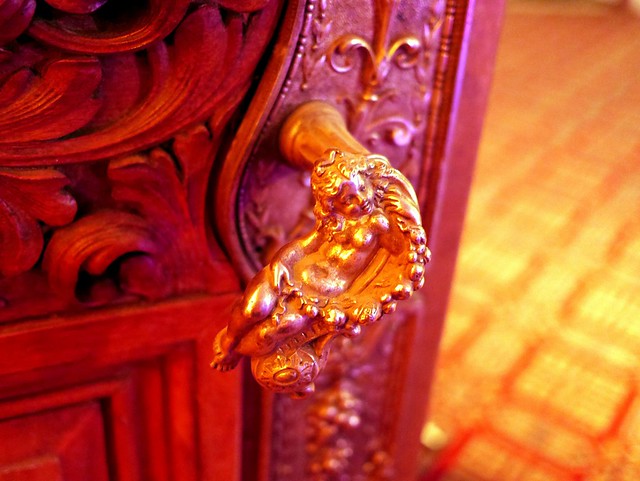 There was yet another "Made in the Middle" event too, another "Meet the Maker" evening with some different makers and some the same, myself included. I bought a brooch by Melanie Tomlinson, illustrator-turned-jeweller: 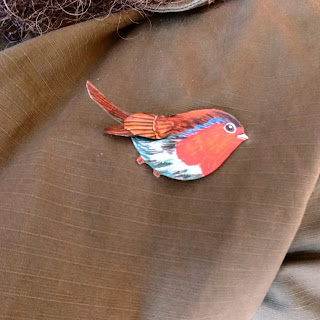 It reminds me of the robin that sits in the garden, quite unconcerned, while I weed and dig, waiting for me to uncover a worm or something. Strangely tame.
Melanie's drawings are really beautiful, reminding me very much of old-school scientific illustrations. 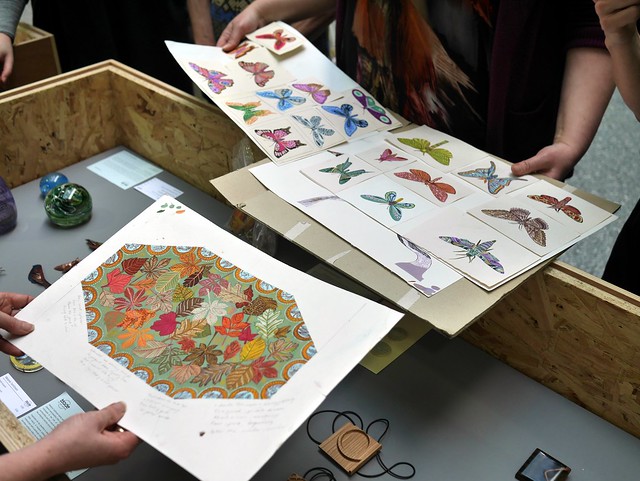 It was also great to hear Zoe Robertson talking about her new works: 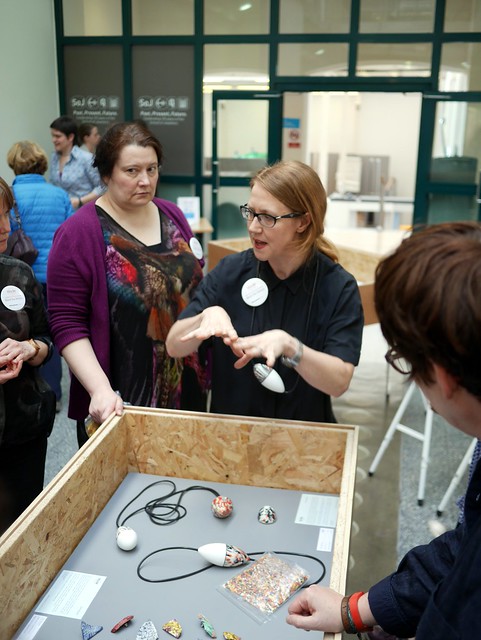 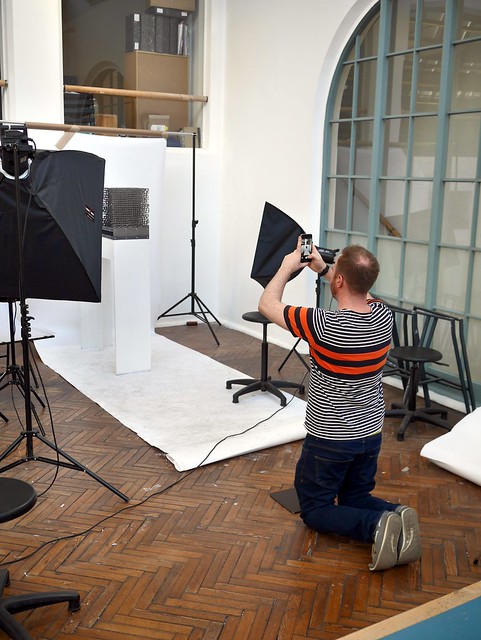 There is something very appropriate about this shot of my colleague, Drew Markou, kneeling in supplication at the base of a fantastic work by my other colleague, Anna Lorenz as it is an altarpiece which she had made for a German church. 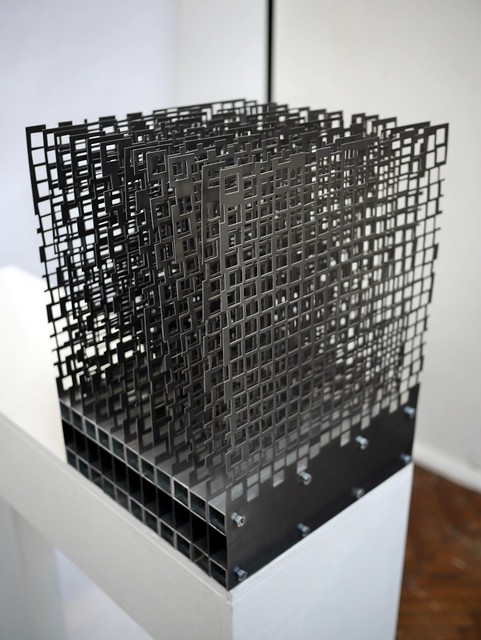 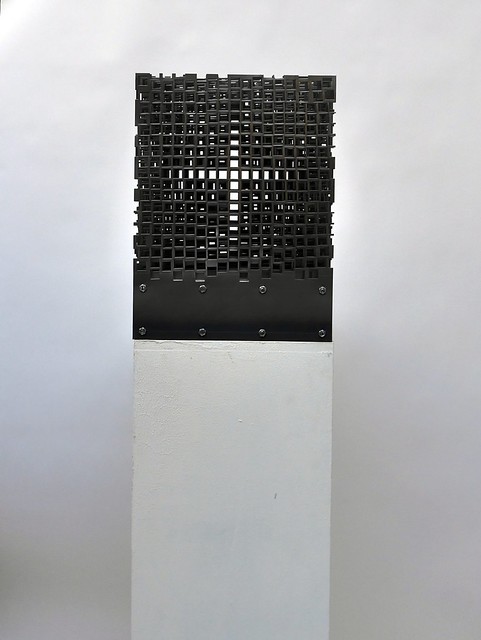 Quite wonderful. I could have done it more justice with a better photograph, but it has been whisked off to it's new home.

Off to Brighton for the break, only to discover that my favourite bookshop in the town has shut down. The notice in the window needs no comment from me: 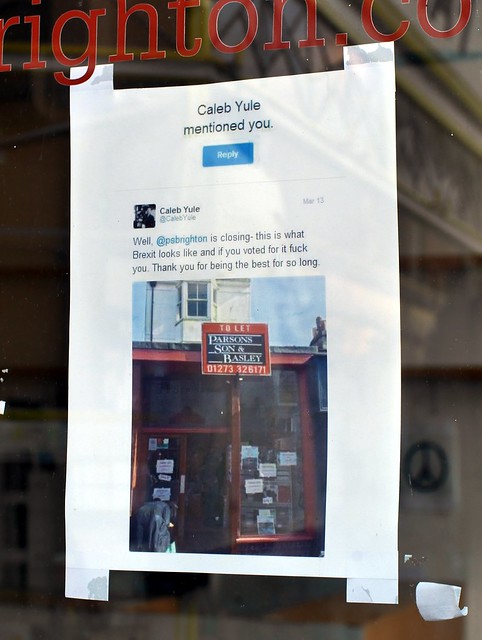 Brighton continues to frustrate and delight in equal measure. Where else could you find Dante in a bad wig? 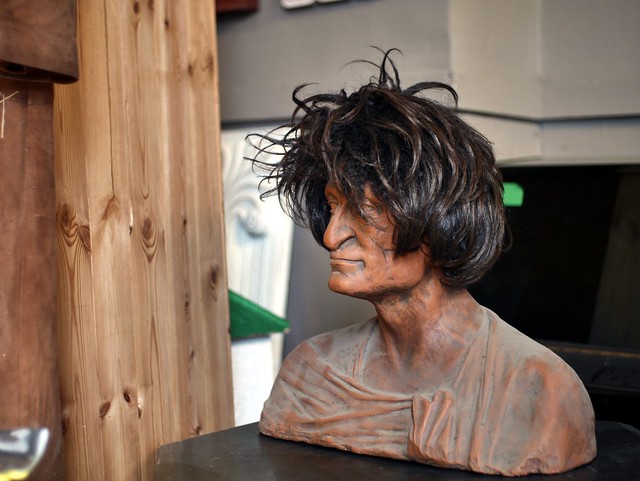 And I'm very pleased to see the sheer volume of queer graffiti: 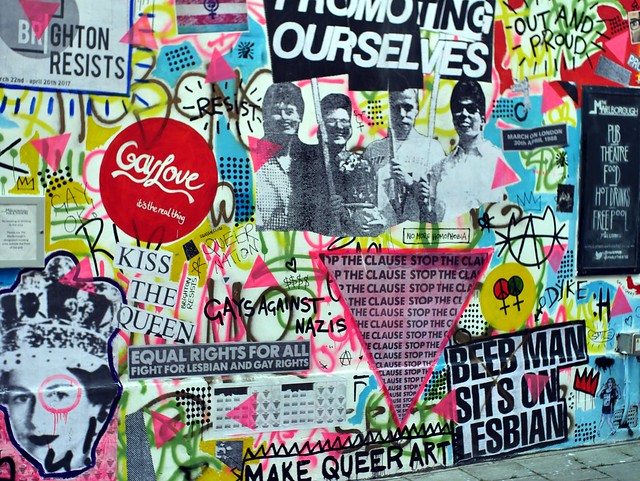 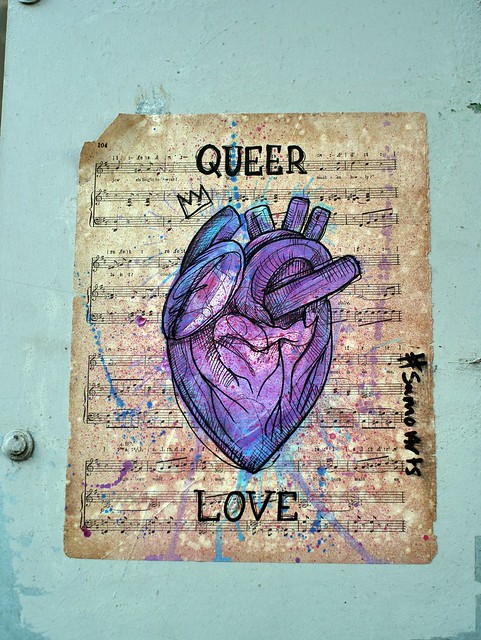 How well I remember the "beeb man" sitting on a lesbian! It is all a bit like the early 1980s again. While I enjoy the thrilling activism of it all, I despair at the need for it again, just when I thought I was post-queer...

Spent a lot of time in the garden as well and it is now shaping up a bit more to be the productive vegetable plot I planned last year. Unfortunately, it had been neglected for so long - not terribly, but it had been left in a state of being semi-wild - that it has needed a heap of work to get it even remotely workable for production. More pleasure and frustration when the asparagus plot produced this: 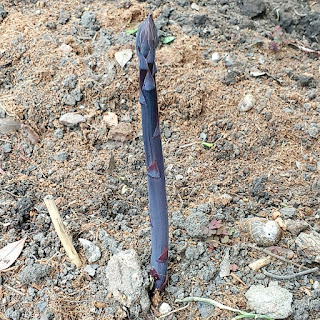 Which, of course, I can't cut. In the hackneyed words which almost every gardener knows (but for which I can find no source), "If you want an asparagus bed, you should have planted it five years ago".