But before I get to that title, what has been going on?
I find myself so busy these days - now that I'm Programme Leader for the HND Jewellery at the School - that I keep forgetting to update on what has been happening! 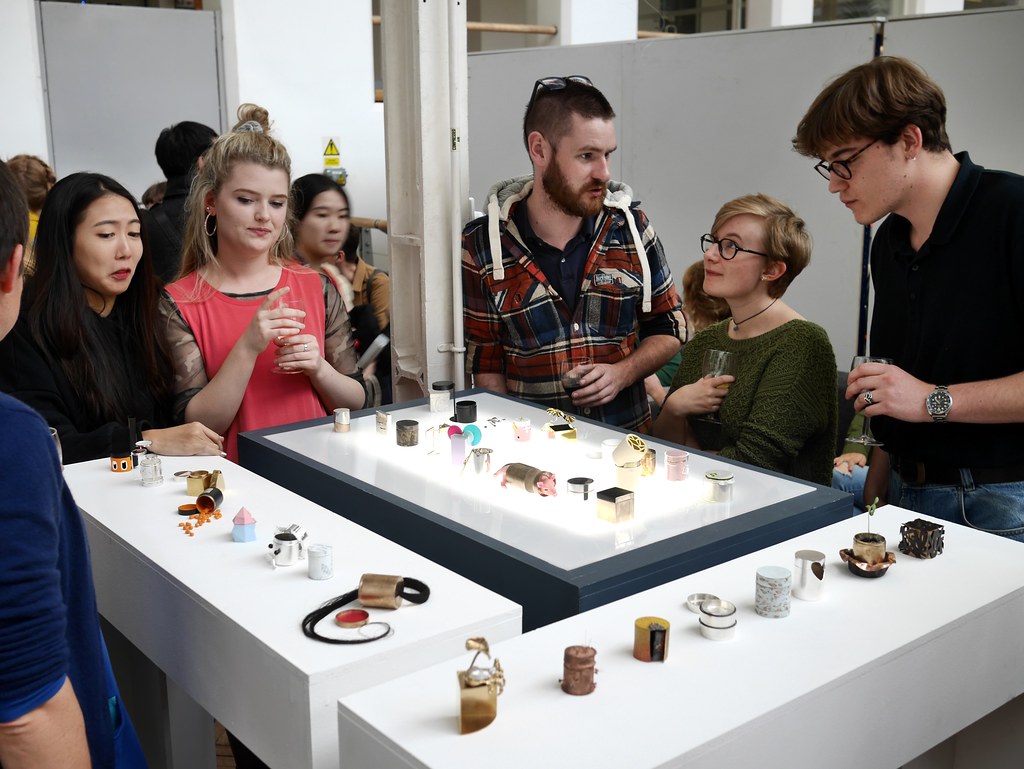 Since the last post, we've had the BA Students complete their expressive "Pots of Joy" project, where they make a little vessel to express something about themselves, a project of which I love seeing the outcomes... 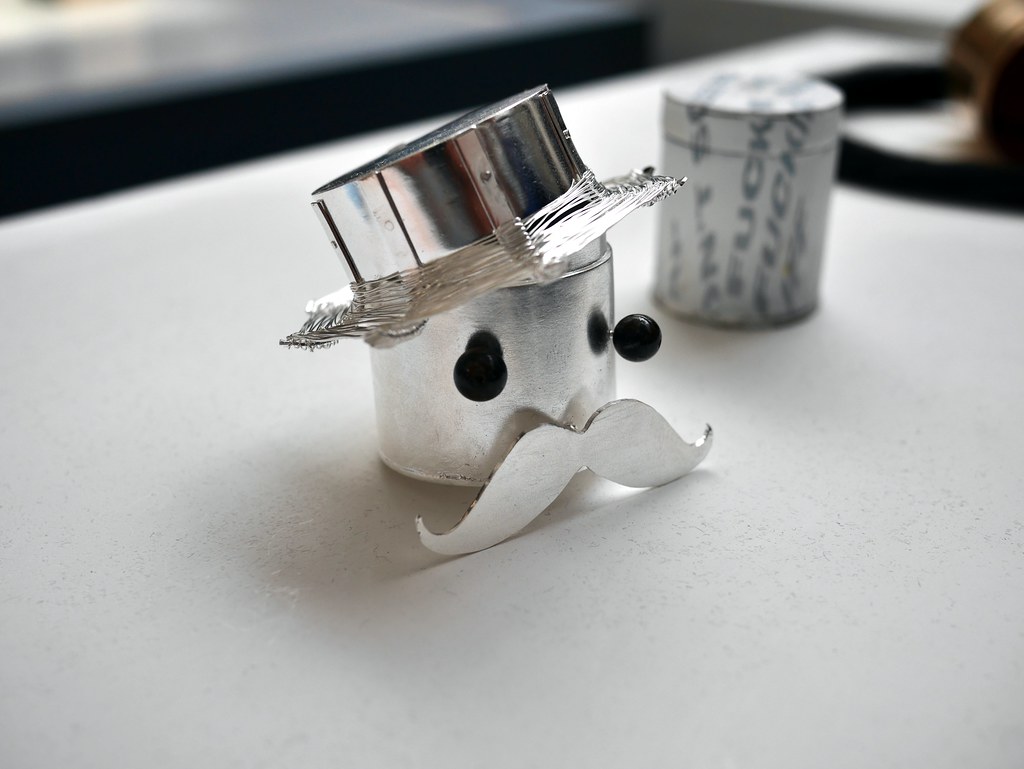 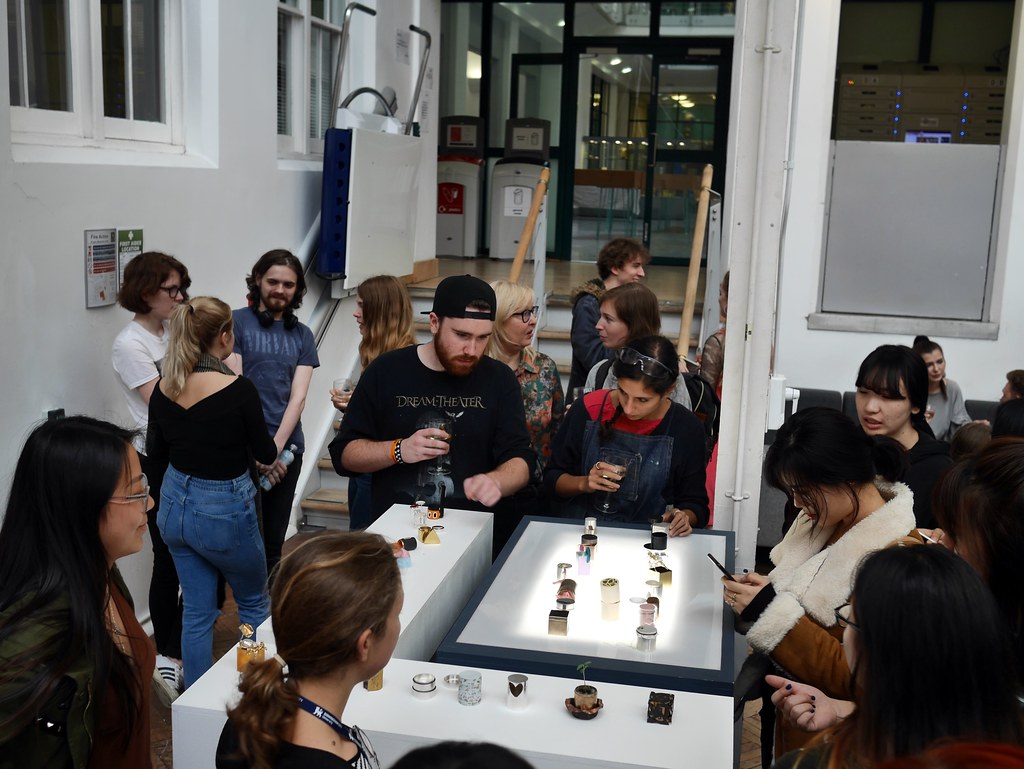 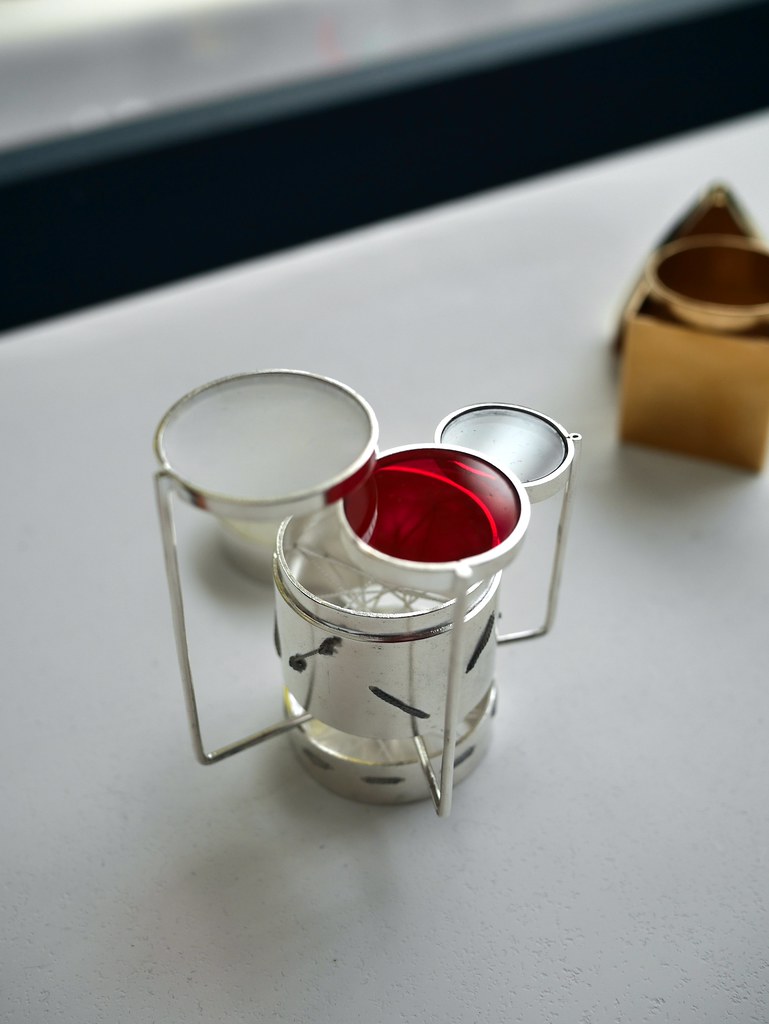 We also had the talks from our extensive programme of Artists-in-Residence (AiR) who come and work in the studios with our current students, helping them out as required, as well as developing their own practice, getting support, mentorship and facilities in return for their valued input. I am lucky to be mentoring an excellent wax-carver this year, Andy Marriott. 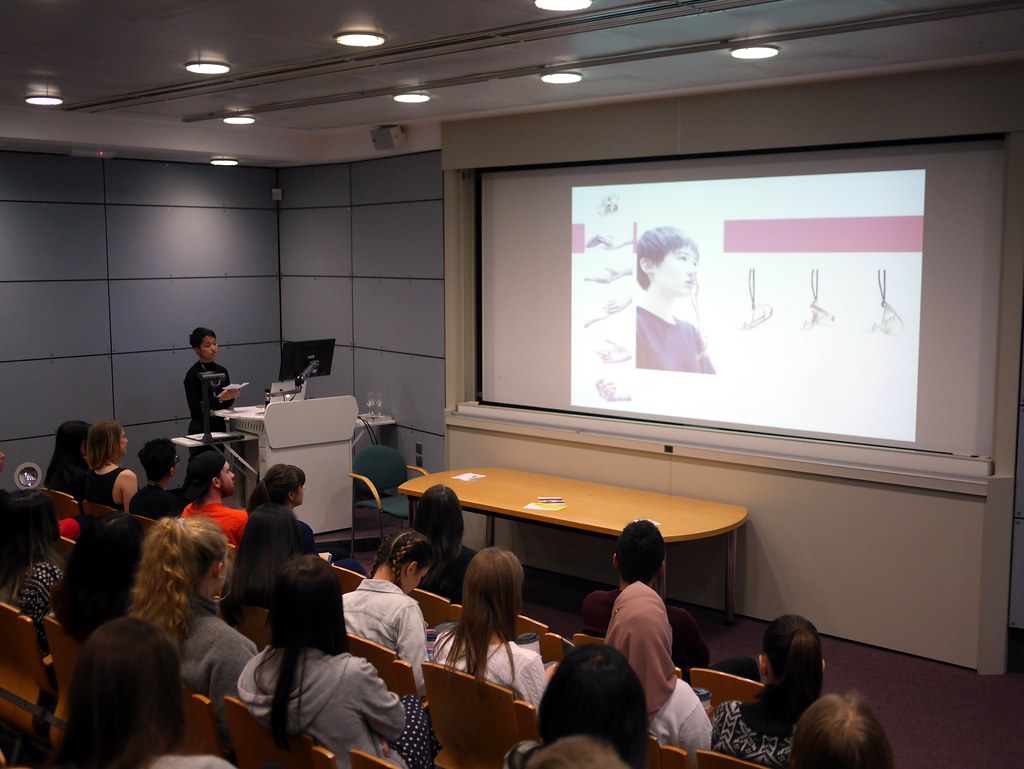 A dinosaur tried to escape from the Technology Hub but was, fortunately, stopped by getting caught in the door: 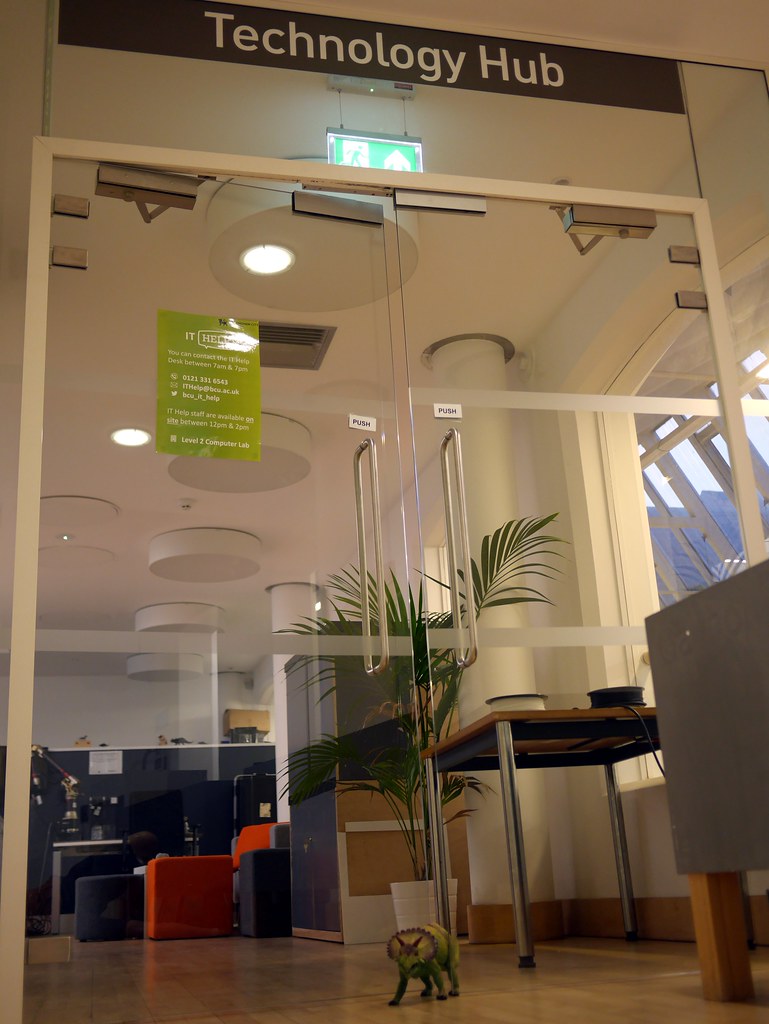 We had a massive storm here - well, like the last massive storm, it didn't amount to much where I was - but it did cause us to have an amazing red sky and sun: 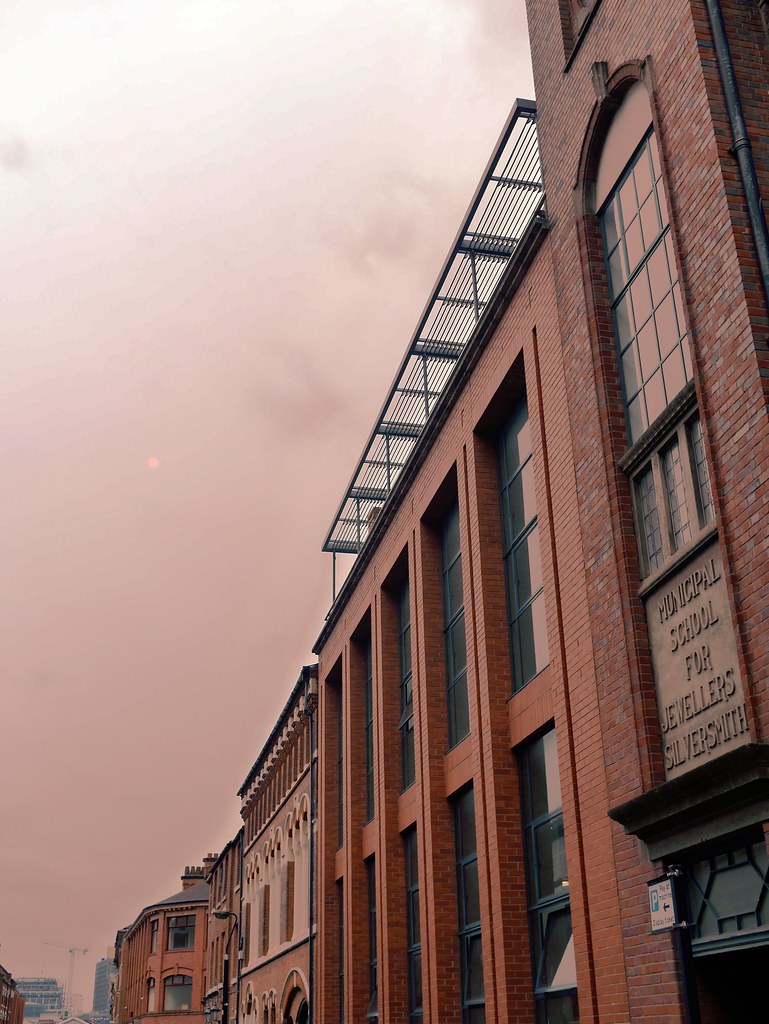 The light was so strange that my camera couldn't really deal with it and this shot even looks a bit solarised! 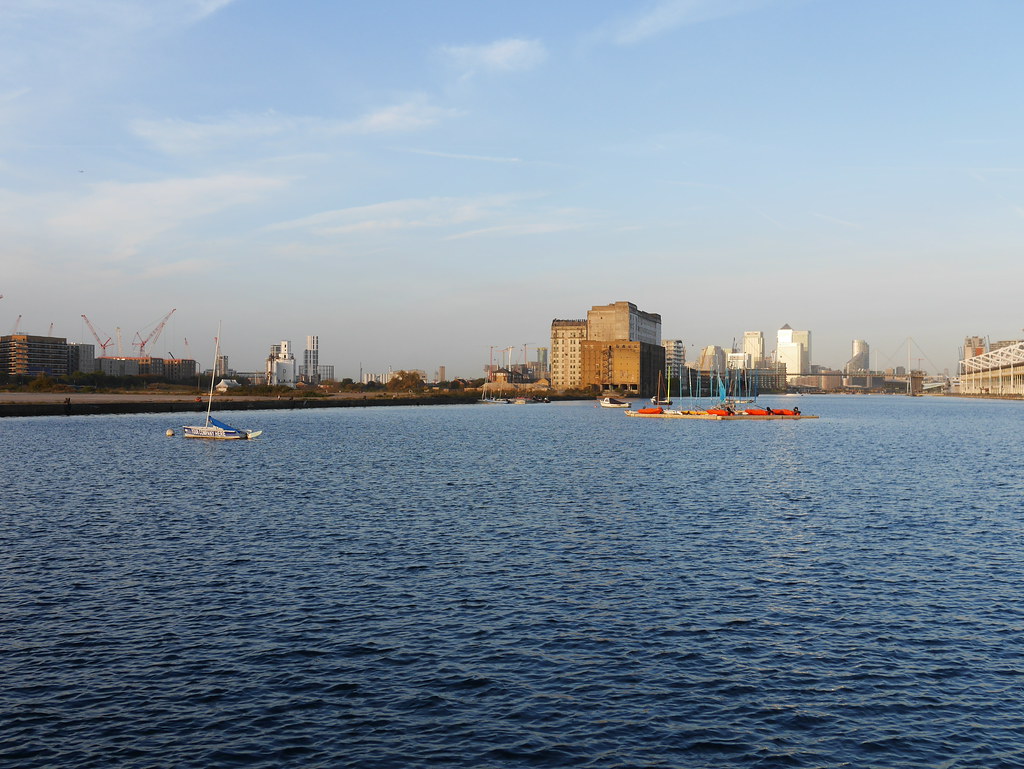 I was sent to London to represent the School of Jewellery and Birmingham City University at a careers fair in Docklands. It was, in the end, great fun. I hadn't been looking forward to it, but a calm train journey down, a fairly comfortable hotel, good colleagues on the stand and it proved to be exhausting but enjoyable. 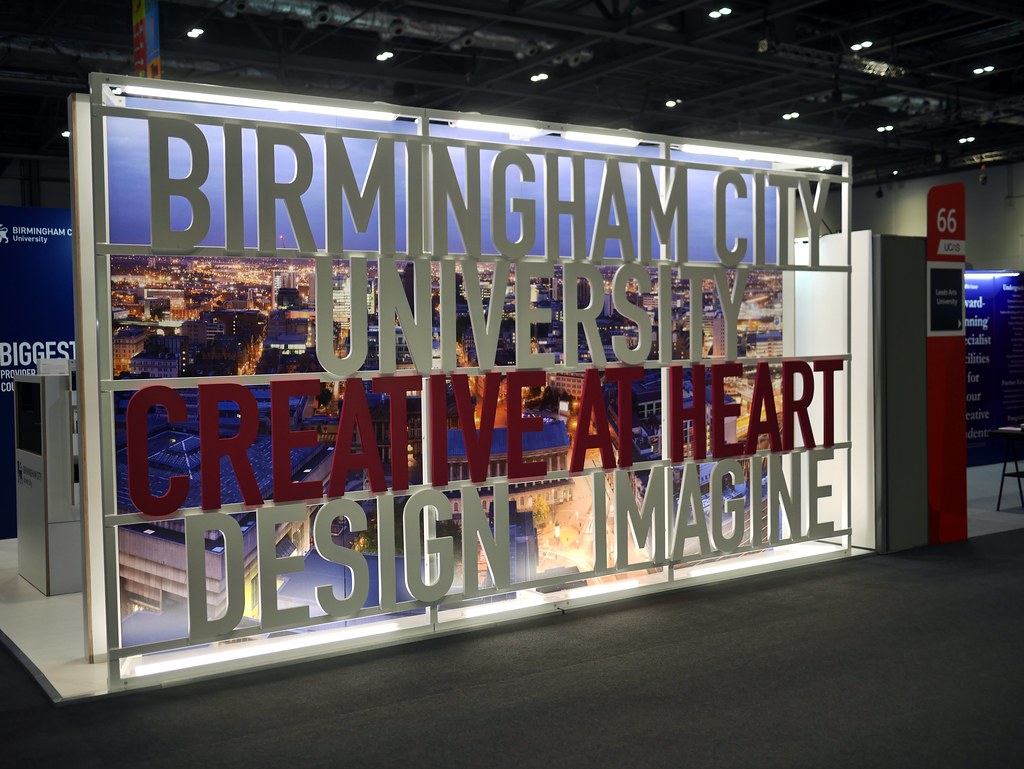 On the second day, I gave a talk about Contemporary Jewellery and took a handling collection of work with me: 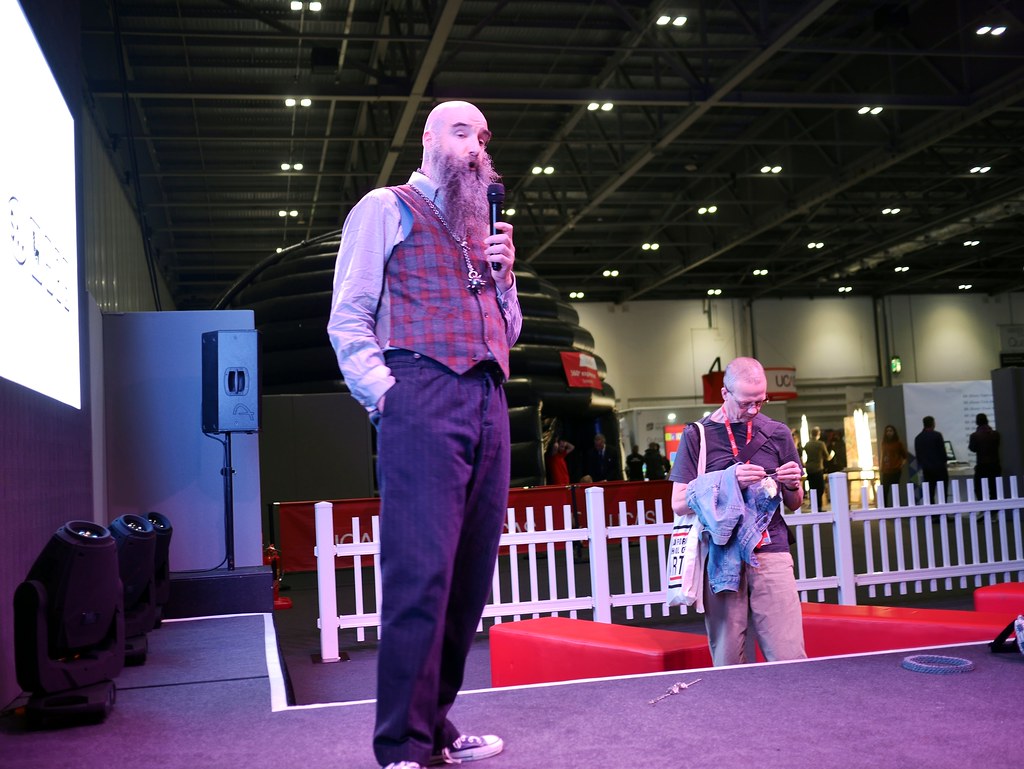 Being on long train journeys and staying in an hotel also gave me the chance to finish reading a remarkable book that I didn't even know about: 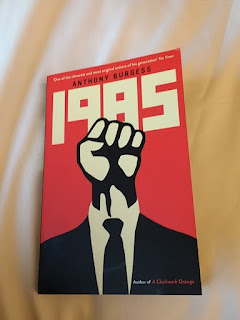 Anthony Burgess' response to Orwell's "Nineteen Eighty-Four", 1985. I found this after reading up on the connections between Orwell's book and Murakami's "IQ84" which I read over the summer.

I've been making up stock for the dreaded Christmas period, as well as a few commissions. Not much to see just now, but I will have some photographs of finished works at the end of the week, including the "Repair" rings about which I wrote in my last post. 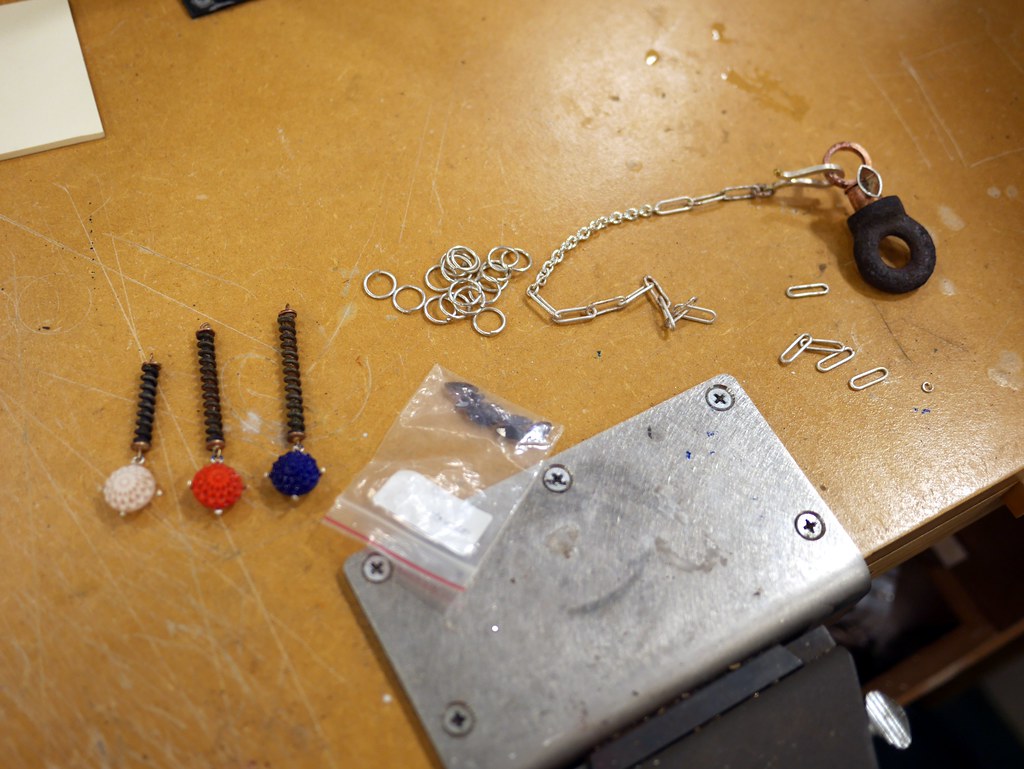 The earring trio on the left include a new material I found this week: Bowden cable! It was being stripped out of the old windows at the School and dumped in the back car-park, from where I rescued metres and metres of the stuff... expect to see more made from this. 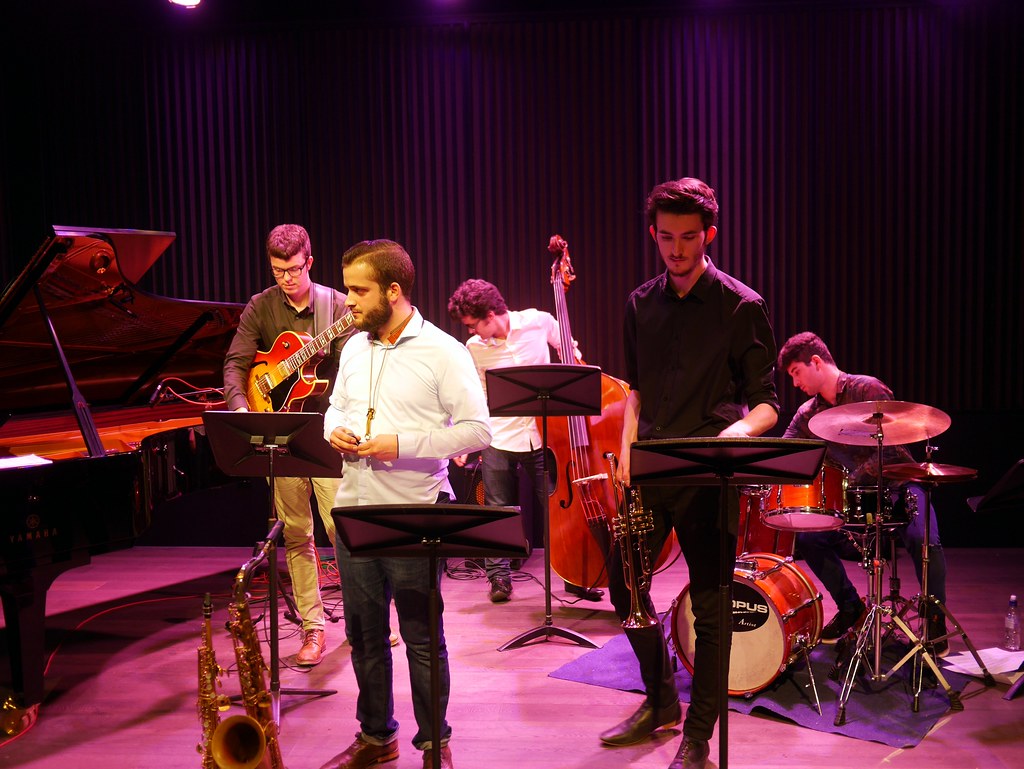 Had a night at the Birmingham Royal Conservatoire with colleagues to listen to two student bands playing the music of Wayne Shorter. I initially bought a ticket for this as the poster made it look as if Wayne Shorter himself were to have been playing, but he wasn't. Mildly disappointing for a £3 ticket! The bands were fantastic and we realised that we were actually watching an assessment of their work.

Which brings me to the end of normal business and to the sorry tale of "Hello Fresh", Nadz and the title of this post, "Goodbye Rotten".

There exists in the Jewellery Quarter, a number of non-jewellery businesses who take advantage of the cheaper office accommodation than would be found in the city centre. Often, these are marketing- and design-based businesses. One of them, "MJ Experia" marketing runs a setup which, from the outside, seems very odd indeed, to say the least (and their reviews on Google Maps seem to back this up - "...They made me cancel a holiday to get the job, which I earnt next to nothing at, and what I did make they never paid me and stole. I worked about 70 hours a week for over a month and got given a total amount of £24...").

I should explain what makes them seem so odd: first of all, there are the cheap suits - I cannot express fully enough my disdain for the cheap, ill-fitting, lairy suits worn by the people who go in and out of this place; secondly, the chanting - they spend the day chanting and shouting and listening to crap, loud music; thirdly, the things they throw out of the windows - for a while, several times a day, a shower of pens, stress-balls, markers, paper cups and other detritus would be thrown out of the window. On the command of the instructors. Yes, really. They TELL their victims to throw things out of the window into the space around, never a thought for clearing up the mess, even when it falls into private land.

And this is how I came to make this post as one of their victims, "Nadz", threw her notebook out of the window: 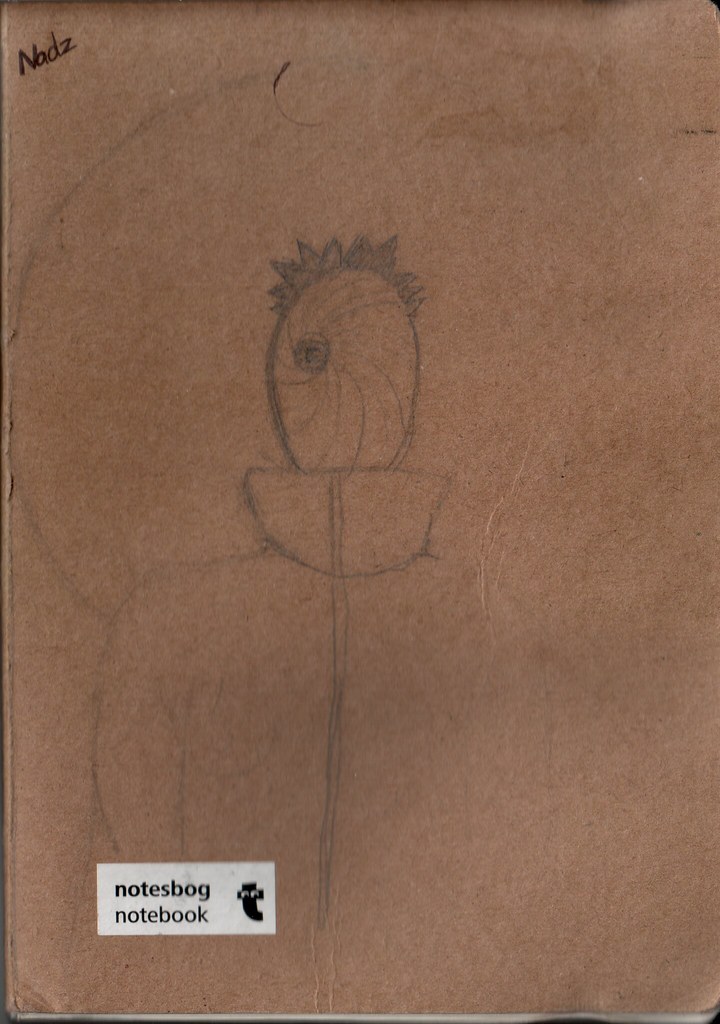 It lay about for a couple of days and as she had plainly decided that it was not to be reclaimed, I couldn't resist the sinister drawing on the cover and took it home. Inside were some quite science-fiction drawings which I rather liked: 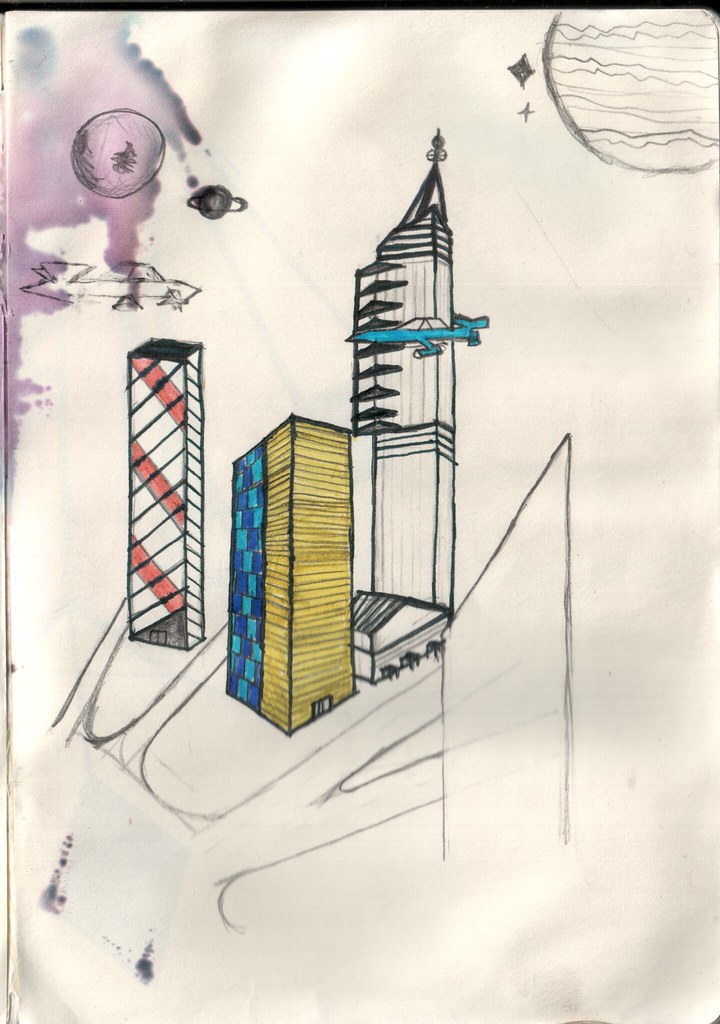 Unfortunately, however, the contents never again reach these heights as the poor author is cowed by her indoctrination into the MJ Experia way of high-pressure door-to-door sales for a company called "Hello Fresh", nauseatingly interspersed with 'high fives': 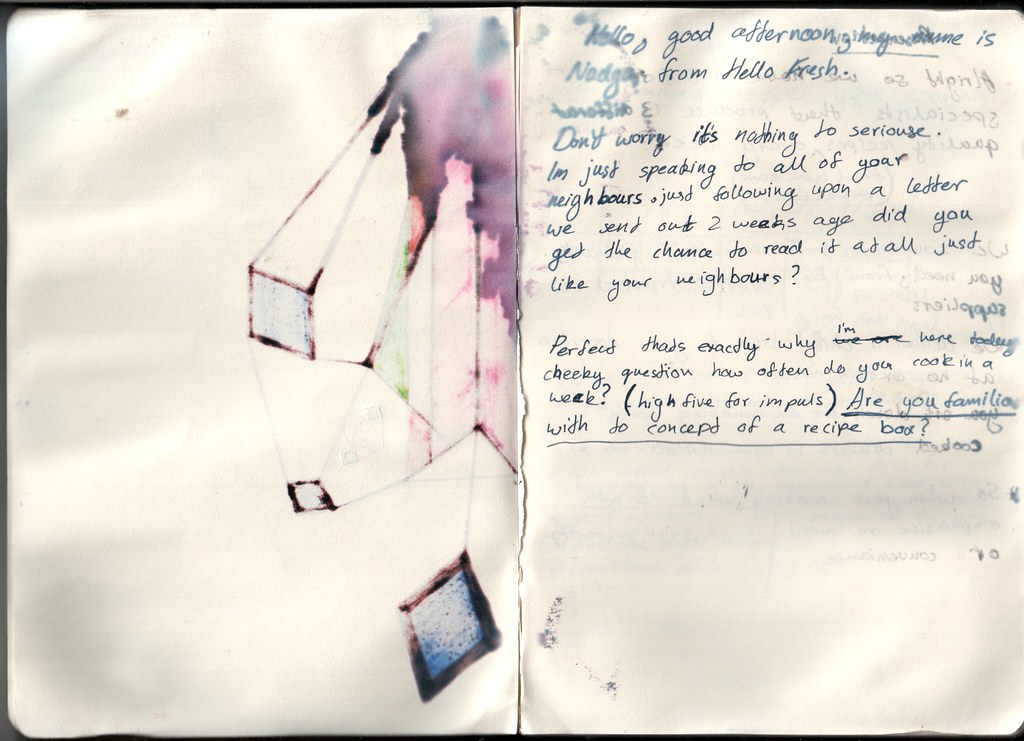 The business of "speaking to all of your neighbours" is a common thread. As is lying to them about the neighbours all signing up.
And more 'high fives', this time with a  'Yeah!!': 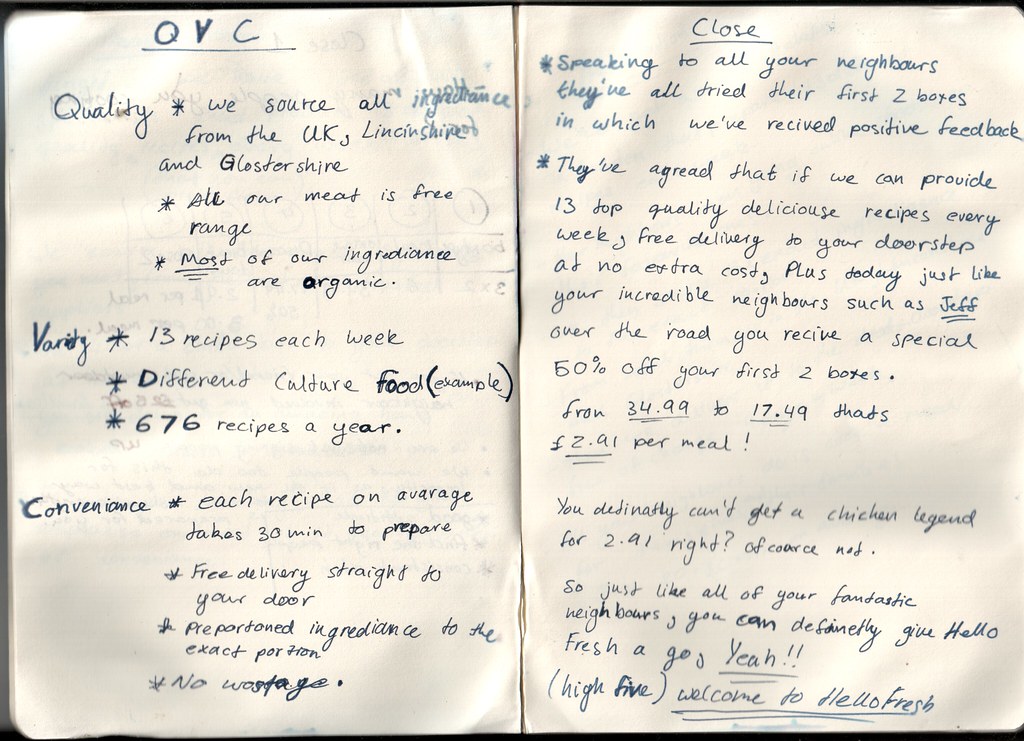 As well as the inexplicable plagiarism of the name of a popular TV Shopping Channel!

As could have been expected, Nadz soon became disillusioned with all this superficial nonsense and returned to drawing: 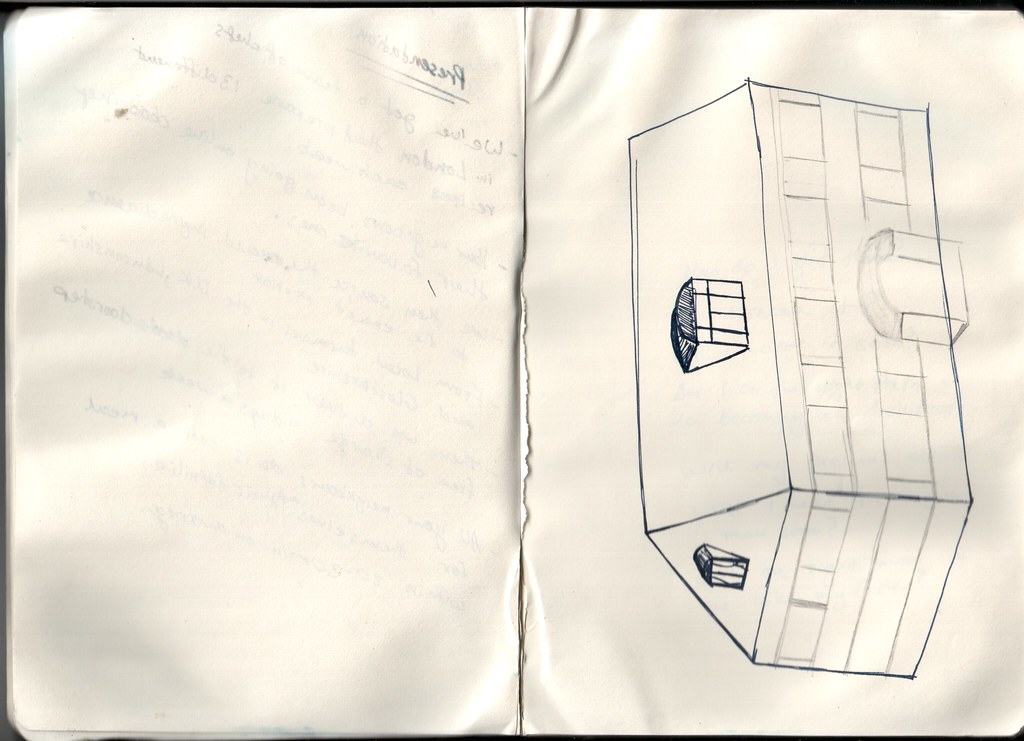 This reminded me somewhat of Garth England's "Murdered With Straight Lines". The next page initially made me laugh out loud but then took on a rather darker complex the more I thought about it: 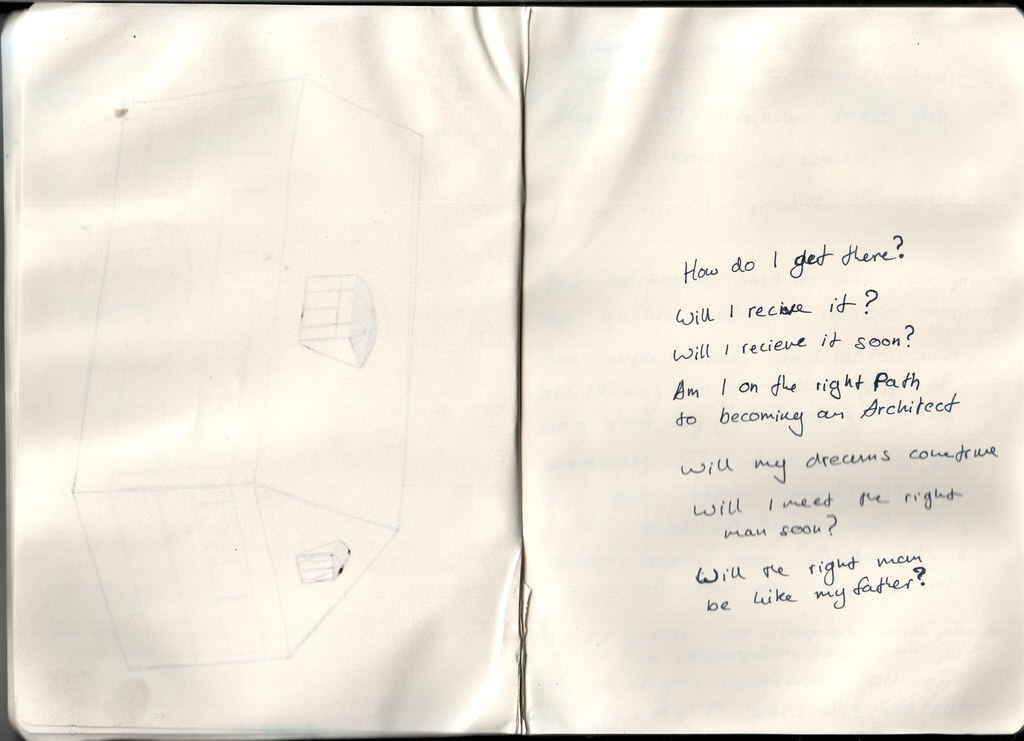 The bit which made me laugh out loud was "Am I on the right path to becoming an architect", immediately following that drawing: what turned it darker was that it is apparent that Nadz realises that she is trapped, wants a better life and is having some sort of an existential crisis while the cheap suits around her high-five and chant and 'Yeah!!' and believe their own puff. Nadz is better than this. A lot better than this. Nadz has been duped, led on, led to believe that this is the limit of her abilities and yet plainly wants so much more. She realises that she is stuck in a dead end McJob.

In short, this is a modern tragedy. We are squandering the talent of young people like Nadz, and, I dare say, the people in the cheap suits, on this sort of crap which functions only to make money for large corporations without any regard for quality of life or self-respect: worse than that, these people have been lied to, sold some sort of a dream based on... fast cars? ill-fitting suits? big houses?

The reason I decided to post these pages was that about ten days ago, I received a mailshot from, of all companies, "Hello Fresh": 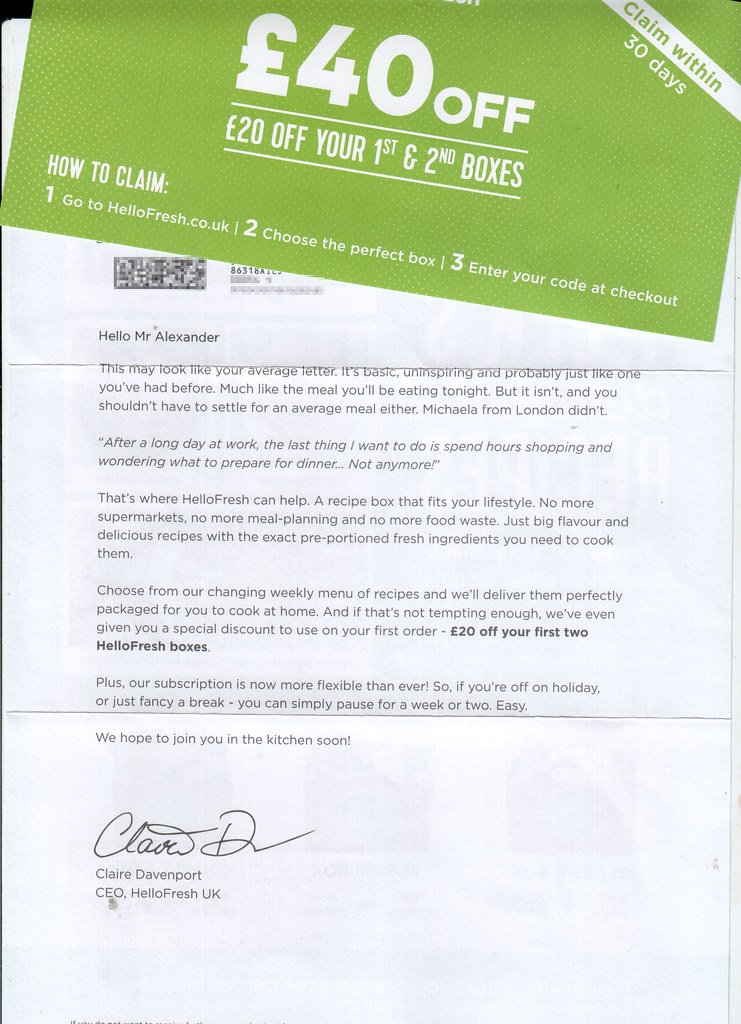 In which, in the first paragraph, CEO Claire Davenport seeks to insult my cooking as being "basic, uninspiring". It seems that the contempt for these marketing types stretches not only to their employees but to those that they seek to market to.

As we near the end-of-days for late-phase Capitalism, I don't hold out much hope for things improving in the short term. When it happens, however, it will be a pleasure to remember Dingo's quip when I showed him this letter: "Goodbye Rotten".