Dutch designer Anouk Wipprecht talks about the digital tools she used to create a collection of interactive 3D-printed dresses for German car manufacturer Audi, which incorporate headlights, parking sensors and other technology. The movie is part of Dezeen's new Future Makers collaboration with Autodesk exploring the future of making things.

Wipprecht's 3D-printed fashion collection, which was unveiled during Berlin Fashion Week in July 2015, consists of four dresses that integrate technology found within the German car brand's new A4 saloon car.

Two of the pieces feature parking sensors, which cause the dress to flash when people get within a certain proximity.

"They're able to sense the surroundings," Wipprecht explains. "So as soon as people approach, my dresses react."

For another dress Wipprecht incorporated 60 watt LEDs from the car's headlights, which emit a blinding flash when triggered.

"I took the LEDs of the car and placed [them] within the dress, so this flashing light goes off and its just shining in your face and just blasting you away," Wipprecht says.

The final dress features an angular white surface, which is designed to be used as a backdrop for projection mapping to give the illusion that it is constantly in motion.

"It's the idea that you are able to have this dress that is always changing," Wipprecht explains. "I would really like fashion to be an interface that can have that kind of behavior."

Each of the dresses references the form of the Audi A4, such as the distinctive diamond shape of the grille, and is 3D-printed in plastic.

Wipprecht used 3D software Autodesk Maya to design each of the dresses, in collaboration with Philip Wilck of Studio Palermo. She scanned the models' bodies using a 3D camera developed by Intel called RealSense. By tweaking the designs around that data before printing them out, was able to ensure each dress fitted perfectly. 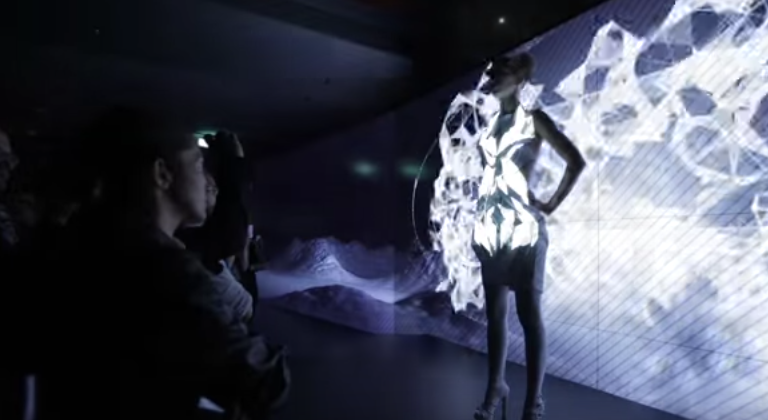