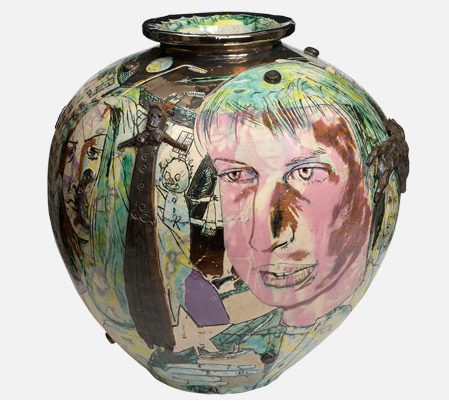 Grayson Perry was never motivated by a desire to work in clay as such, but chose pottery because studio ceramics was in ‘thrall to a formal idea’. Having gained pottery skills at evening classes, Perry made use of glazing, embossing, and photographic transfers to reference dark and often autobiographical scenes, developing the distinct type of polemical pots he is famed for.

Perry challenges the idea, implicit in the craft tradition, that pottery is merely decorative or utilitarian and cannot express ideas and it is this thinking that made Mad Kid's Bedroom Wall Pot a vital addition to the Crafts Council Collection. Perry was awarded the Turner Prize in 2003.

- See more at: Read more about related loans and exhibitions at the Crafts Council “The collage surface of Mad Kid’s Bedroom Wall echoes pop art traditions. But unlike, say, Richard Hamilton’s parody of upbeat consumerist domesticity, Perry draws us into the more psychological landscape of the teenage bedroom. Perry’s pots of the 90s possess a raw power: the potency of their ideas outstrips their technical sophistication or prettiness. A poem pinned to his metaphorical wall ends: ‘I was a mad kid and now I ain’t. I got out coz I could paint.’ Through its conscious lack of polish it manages to say something eloquent about the redemptive power of art, for both artist and viewer.”
-- Alun Graves