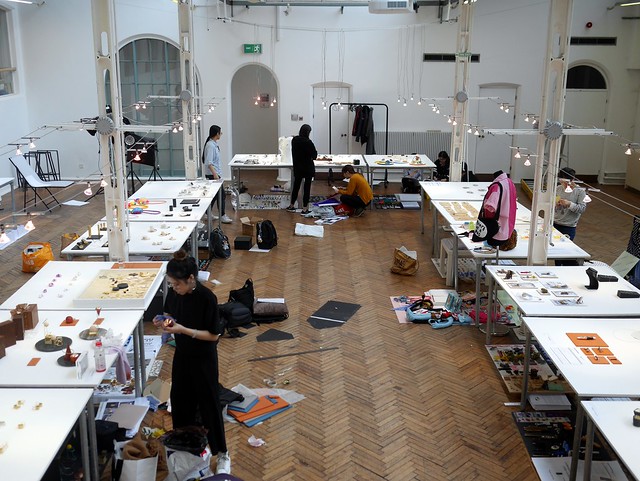 A short hiatus in posts recently which is not that there's been nothing going on, more that it hasn't been anything major and I've actually been too busy to get time together to write. SO a longer post with a lot of photographs covering what went on in the last month...

At the School of Jewellery we've been preparing for the graduate shows, working through assessments and meeting with our external examiners. The work has been laid out and, as ever, looks fascinating. (When taking the above shot, I was asked if I'd had my "Working at Heights" training - I hadn't!) 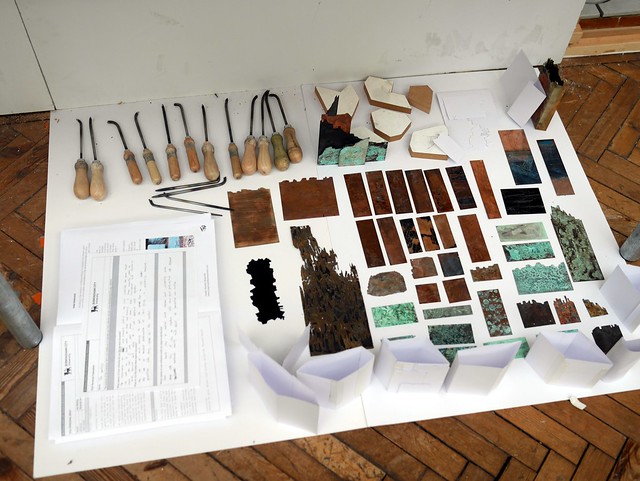 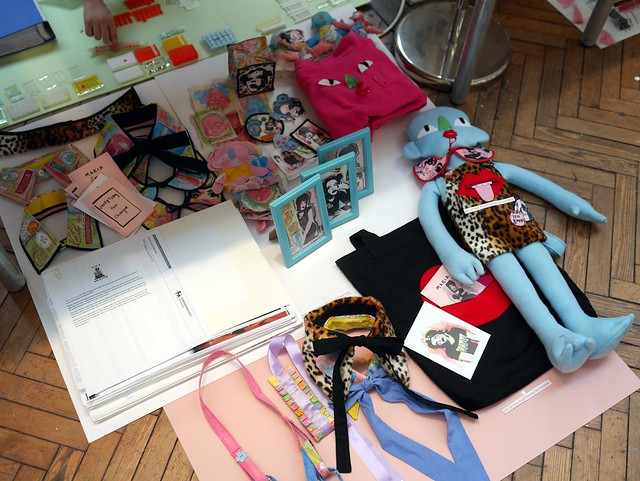 The above work is from the BA students, whom I don't really know - top, Joseph Westley, bottom, Maria Walmsley - but my own students have been submitting some amazing work too:

Needless to say, it isn't all academic. Some of it is boring slog: 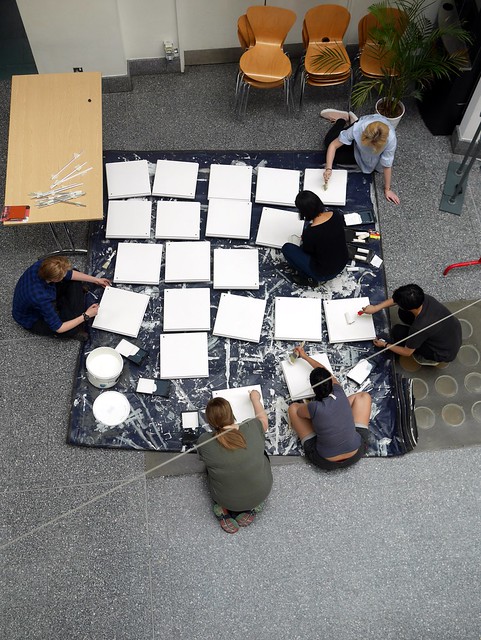 And some of it is silly fun. Here are the MA students making short films: 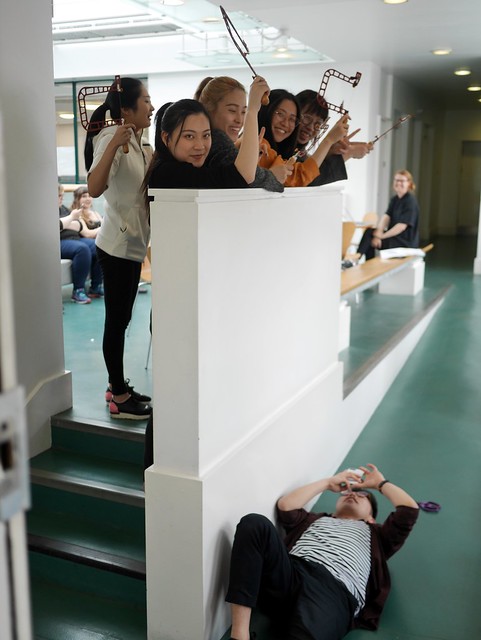 Life goes on as before for the other years, of course. You may recall that last year, there was a short enamelling project for the Level 5 BA students with the wonderful John Grayson and it was run again this year, but for a variety of tedious reasons, it was very, very short this time around and while the results were not quite as finessed, they show enormous promise for the students to build on in years to come. It was exhibited at the great 1000 Trades bar in the Jewellery Quarter: 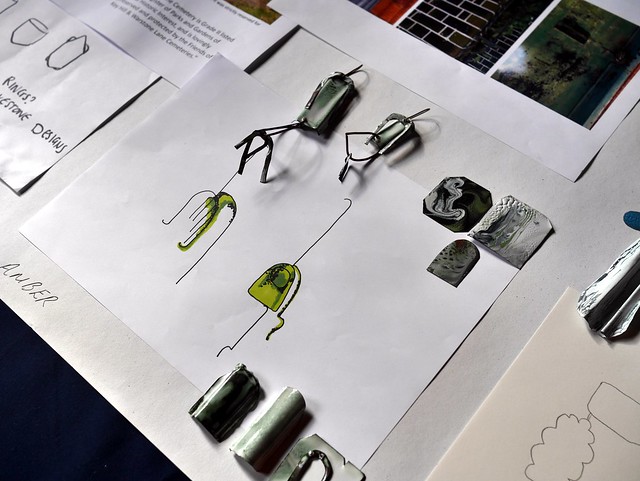 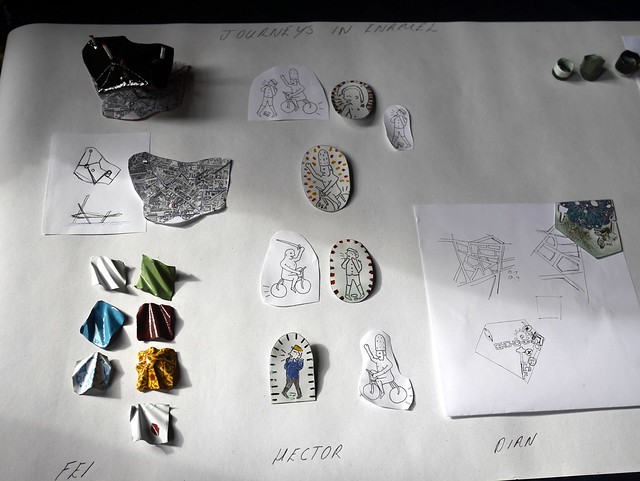 Unfortunately, I don't know all these students, so can't give you their names beyond their own labels. I was rather taken with Fei's impromptu eye-patch! 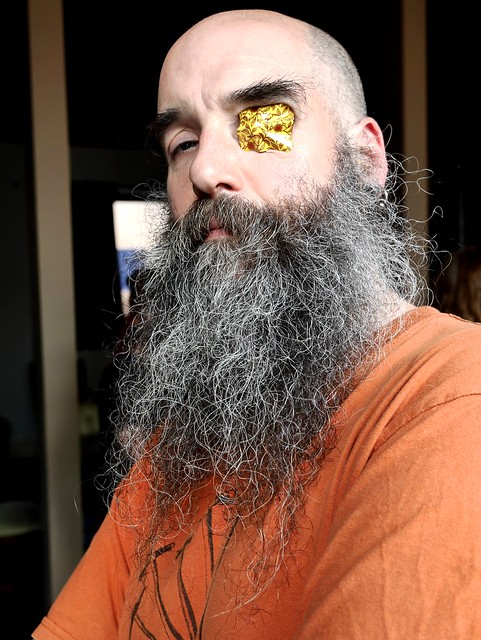 (That beard is a mess! I'll need to visit the barber before the Graduate Show PV.)

In other news, I've been to a number of concerts as well, starting with Swans at The Asylum, a rather marvellous venue in an industrial estate just on the edge of the Jewellery Quarter. I've come late to Swans, having first heard "Soundtracks for the Blind" very late at night sometime towards the end of the last century as a friend drove me back home from a weekend of mountain-biking in the Highlands of Scotland. I've followed them ever since but have never managed to catch them live until now, which is just as well as this is supposedly their last tour. 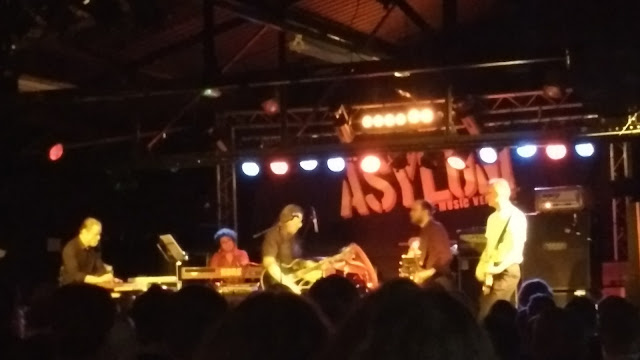 (Due to security, I didn't have my camera and had to use my phone.)

Michael Gira's baritone has been a constant throughout every incarnation of the band and strangely, rather as Blixa Bargeld had done at last month's Einsturzended Neubauten gig, he seemed to be channelling other singers, Lou Reed ("The Glowing Man") one minute, John Lydon ("Clouds of Unknowing") the next, swinging from classic Swans to the strangely fractured heavy funk of the likes of "The Man Who Refused To Be Unhappy". Special mention must be made of drummer, Phil Puelo, who deserves an award for endurance!

The venue is rather good too, a proper black-painted rock dive with a certain humour: 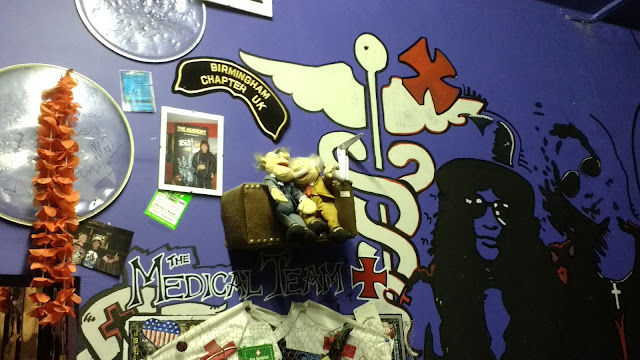 It was also a joy to hear the BBC Symphony Orchestra performing Messiaen's behemoth, "Turangalîla-Symphonie", a piece which holds a special place in my heart. Strangely, the first time I heard it live was about 10 years ago, performed by the CBSO in the same venue, Birmingham's Symphony Hall. That time, my good friend James and myself were sat directly in front of the Ondes Martenot and the wonderful Joanna MacGregor on piano. The Ondes Martenot was so loud that we couldn't hear the enormous orchestra. This time I was seated in a much more balanced position (though James was, once more, in the front row, directly in front of the Ondes Martenot!). 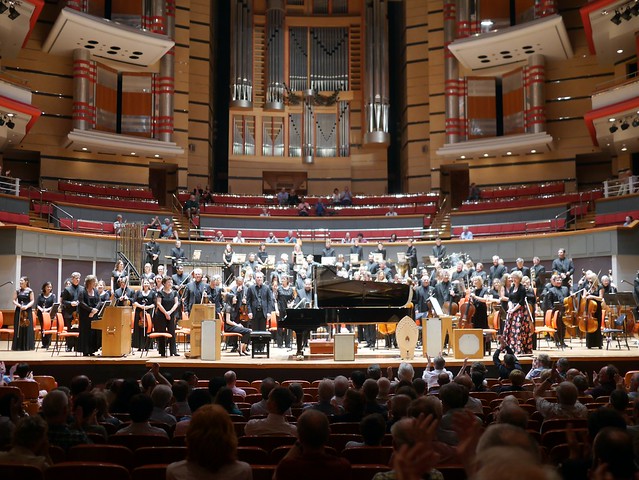 This was a very lively performance, conductor, Sakari Oramo taking the whole piece at a blistering pace, faster than I have heard any other recording or live performance taken!

I go back a LONG way with Turangalîla, it being my equivalent of seeing the Sex Pistols at the Lesser Free Trade Hall in 1976, and it happened about the same time... I was sitting in my room, supposedly doing homework of some sort but actually playing with the radio (listening to shortwave radio is still one of my favourite pastimes) when I heard this most glorious NOISE and stopped on the channel to listen; I listened to the end. It was, of course, Radio 3, and the announcer helpfully told me that it was Messiaen's ecstatic symphony.

To that point, I had been listening almost exclusively to Roxy Music, David Bowie, various prog-rock acts and some "electronic" music of the sort that Tangerine Dream were making. With the help of my wonderful mother - who never sought to discourage me from anything creative - we found a 2-cassette (!) recording of it, which I listened to on repeat. Within a few months, I was listening to Lutoslawski - dragging my poor mum into Glasgow to hear his "Funeral Games" performed - to Berio and, indeed, to anything that smacked of the unorthodox. In many ways, I had been prepared for this shift by Bowie, Roxy, et. al., and so it is that this piece of music brings me more joy than almost any other musical work: I adore it. 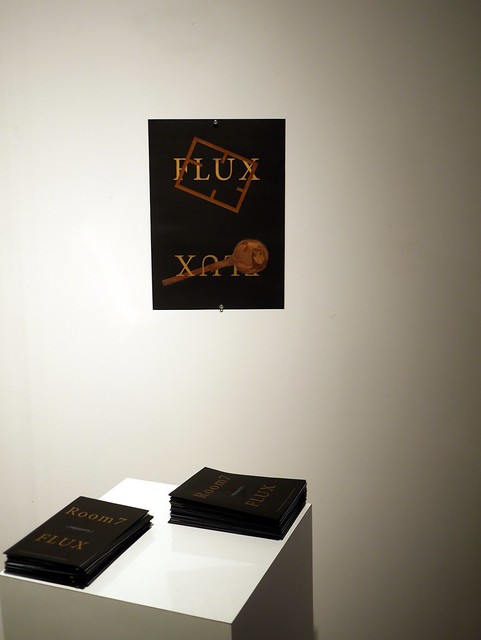 Which brings me to the most recent Friday and another excellent "Theatre of Jewellery" piece by my esteemed colleague, Zoe Robertson. You may recall that her last work was Flockomania, about which I wrote here. This time she has created something much darker, almost sinister... 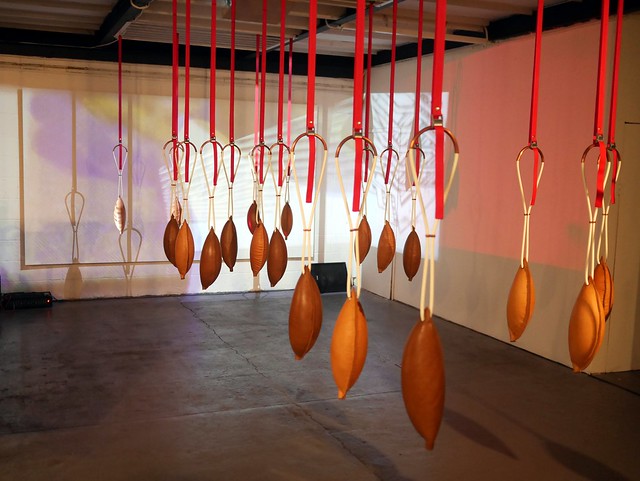 Titled, "GatherIn", this piece was part of an event by a curatorial collective from Birmingham University called "Room7". The event title was "Flux" and featured not only Zoe's work but also installations by architects, painters and sculptors. 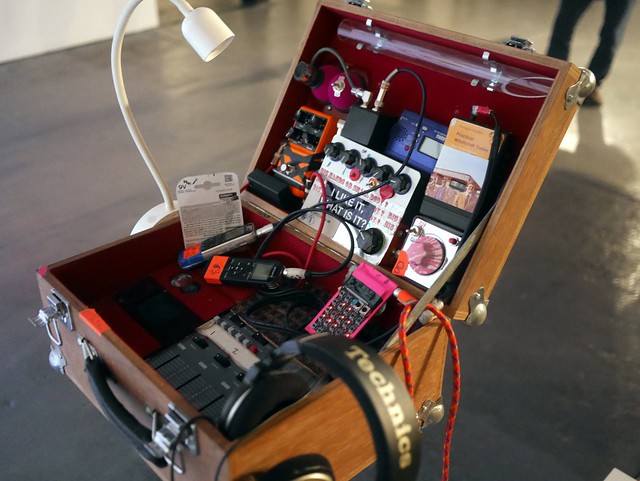 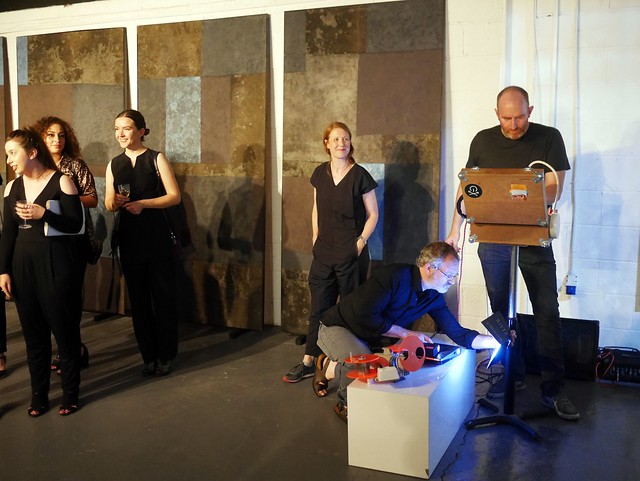 The whole performance reminded me of nothing other than the classic "Invasion of the Body Snatchers", from the 'pod' forms, to the way in which the dancers ended up unified with the pods and even apparently giving birth to them. Quite, quite brilliant and a totally unexpected direction after the playfulness of Flockomania. 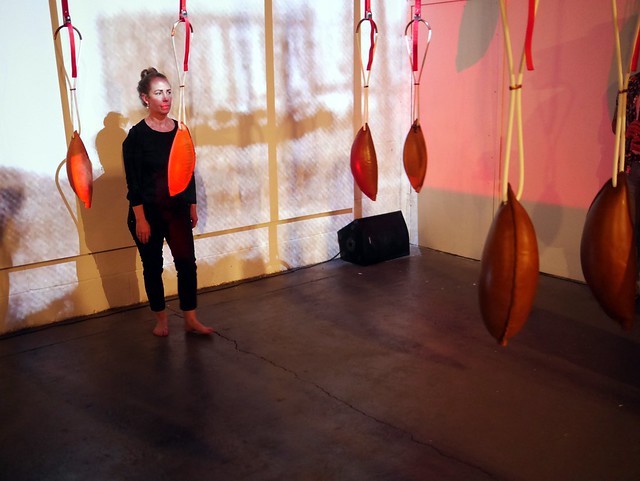 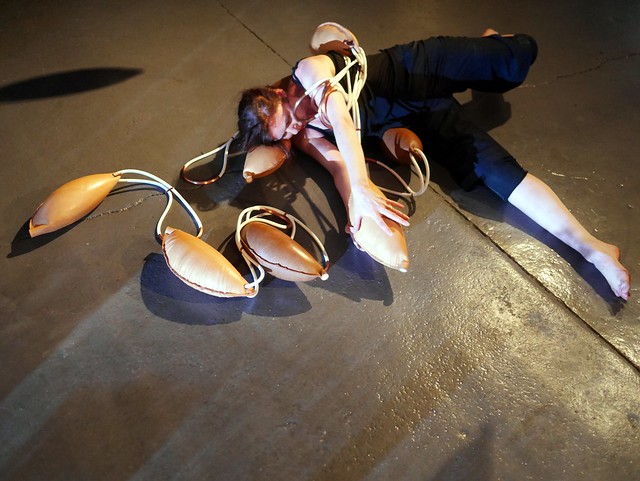 Apart from all this, I've been working a lot on the house and garden: I can now use my front room and have nearly completely emptied all the boxes from the move down. I even got round to making a lamp using some found objects and some strange vinyl hands given to me by Mark Fenn! 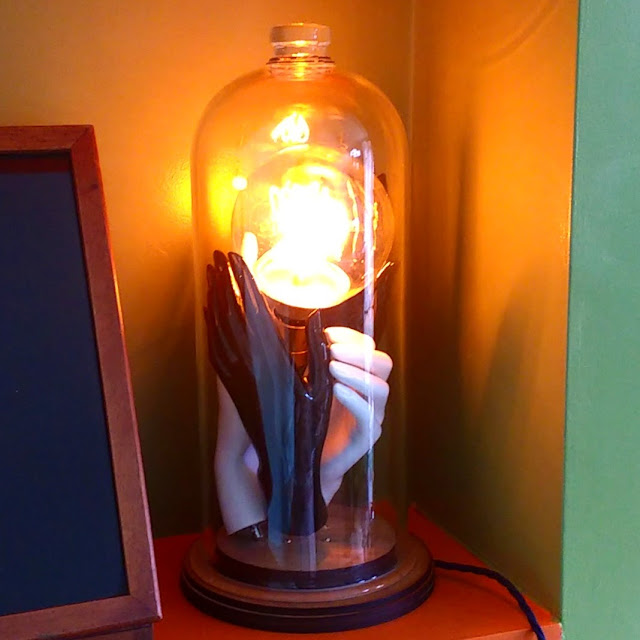 The garden is starting to take shape but I was disappointed to discover this morning another buried patio... there seems to have been a patio on every part of the garden at some point and now I'm having to dig them all up. 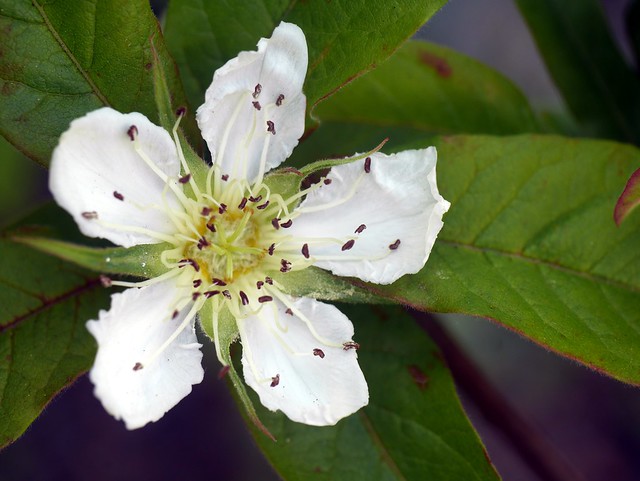 I'm slightly concerned about the giant artichoke which has grown in the front garden.

In terms of making jewellery, I've just been given these hilariously tacky objects: 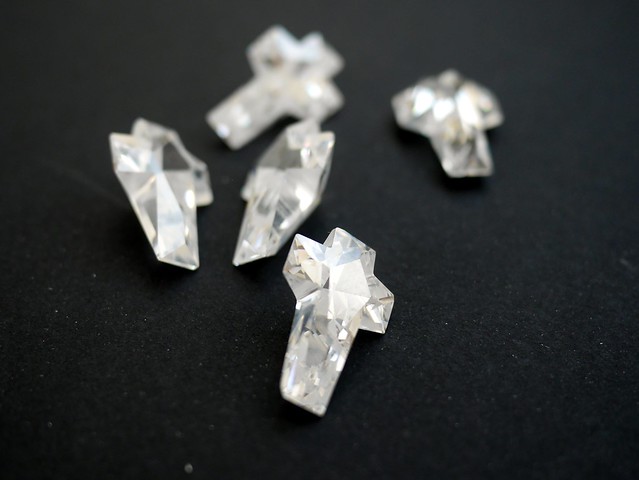 They were given to my by Miranda, one of our gemmology lecturers. Apparently they were cut (from CZ) for Argos who then decided that they were too heavy. Needless to say, I am delighted to be able to use Argos rejects for my own subversive purposes!

Zoe's new work looks indeed both threatening and intriguing. Perfect. Wished I could see this in person. Thanks much as always for your updates from across the pond. Always fun and interesting!