Not much to report this week, so I'll digress on the new garden in Birmingham, for where I have been struggling to find that most proasic of vegetables (fruits, I suppose): rhubarb. I have always thought I hated rhubarb but one day a few months back, my colleague, Claire Price, brought in a jar of jam for us to eat at one of our regular staff breakfasts. I tucked in without giving it much thought and marvelled at the balance of sour and sweet, at the hint of orange, at the amazing scent. It was, of course, rhubarb jam.

My memories of rhubarb are that it is a slimy mass, tasteless beyond the gland-puckering sourness that every vile spoon held. It was often served with equally tasteless "custard" (thanks, Alfred Bird, another of the great Birmingham industrialists) or in the form of a hideous crumble, all slime and pulp under a friable, floury topping. I don't recall my mother ever cooking rhubarb - I might have liked it if she had - and Dingo is convinced that the reason I thought I disliked it is through being fed on something of which I had hitherto never heard: tinned rhubarb. Yes, it exists:

One can only imagine how much more horrible would be the industrial-scale catering packs bought by the school and fed to us as part of our pre-Jamie Oliver lunches.

Suffice to say, I am a convert. I've been buying it at the Digbeth market, roasting it, making rhubarb gingerbread, eating it in yoghurt and now it feels like there is lost time to be made up, though I find that I'm too late to buy plants for the garden. The lovely fellow at my local garden shop, Webbs - a real old-school gardening shop - told me that he might be able to find some in pots, otherwise, I must wait until next spring. 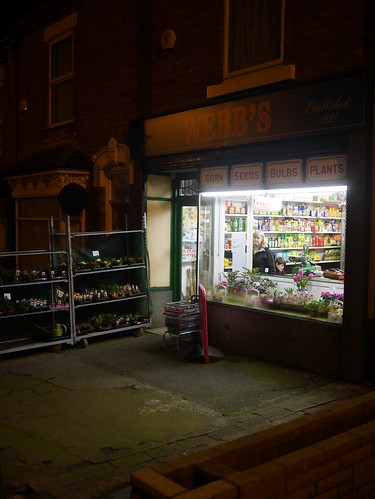 So, back to the market until the season is over.
It was nearly over for last Saturday's purchase, when it fell off the pannier on my bike, causing a bus to swerve... fruits of the world in peril: 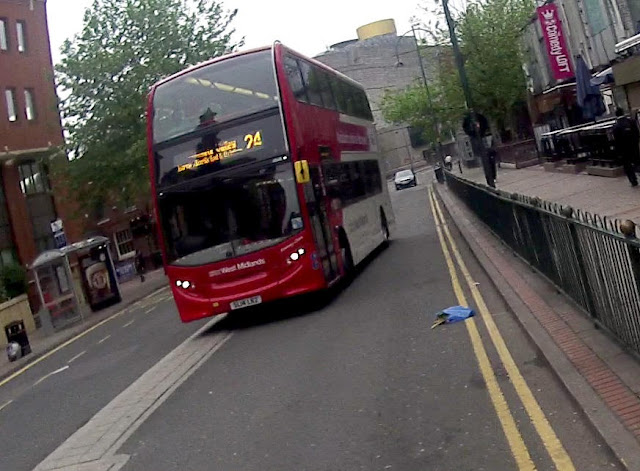 Handily photographed by my helmet-camera! Still, I can happily report that the rhubarb survived to feed me later in the week.

I don't speak German and my grasp is less-than-rudimentary, however I found this little story - in German - about Barbara's Rhubarb "Kuchen" incredibly funny: 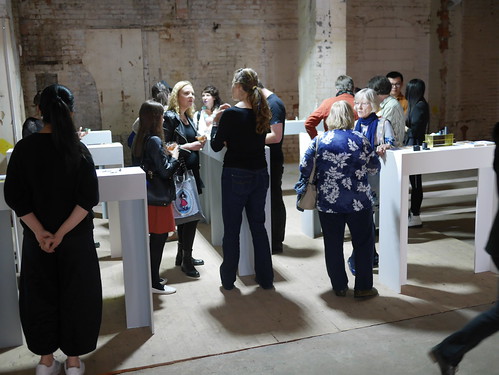 This week has been filled with marking student work: it may be brilliant to see how well they have all done, and it is going to be a stellar graduation show this year, but it is hard work doing all the moderated marking, so the highlight was a project run by John Grayson with a select bunch of BA and MA students to make "Enamelled Mechanical Marvels". You will recall that I've posted John's work on my blog before here. For some of the students, this was the first time they had the chance to work with enamel and the project only ran for four full days, which makes the results even more remarkable.

The show was held in The New Standard Works, a derelict factory in the Jewellery Quarter which has been taken over by the Ruskin Mill Trust and which is being redeveloped for use as "Argent College", a social enterprise resource for people with learning difficulties and a place which we are hoping will develop strong links with the School of Jewellery.

It's been odd being in the workshop with no students there. The lively energy has dissipated and I suppose that is just as well as I've been having to mark everything. I love seeing how they choose to display their final pieces: 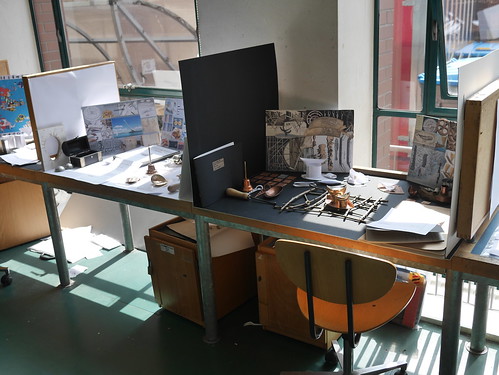 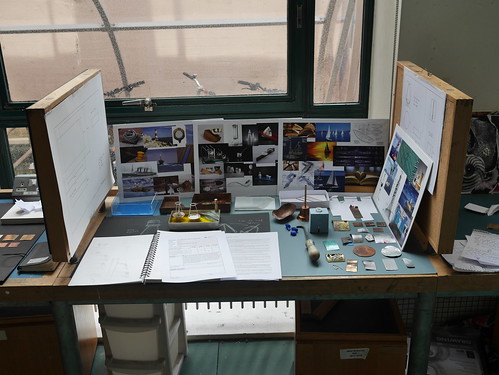 This is the Level 4 students and they are presenting their first small-scale silversmithing project, making a salt-and-pepper cruet. They were given a really specific brief which imagined that it had been commissioned for someone who wanted a sailing motif. Some of the results are spectacular. 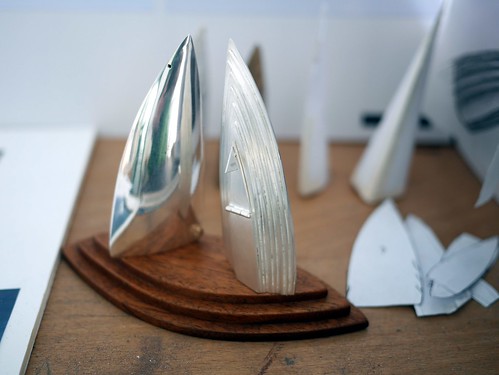 I'm really proud of these students. Some of them had never been in a jewellery workshop or worked with tools before last September!

In the workshop, I managed to get quite a lot done on the "Seven Macho Bracelets": 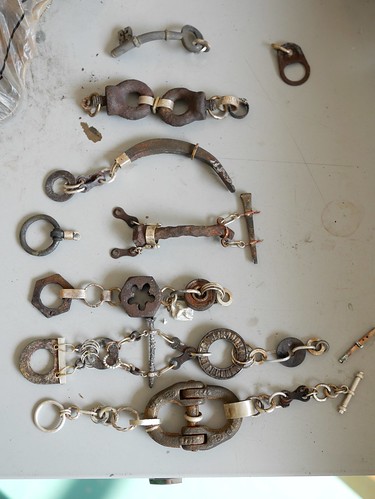 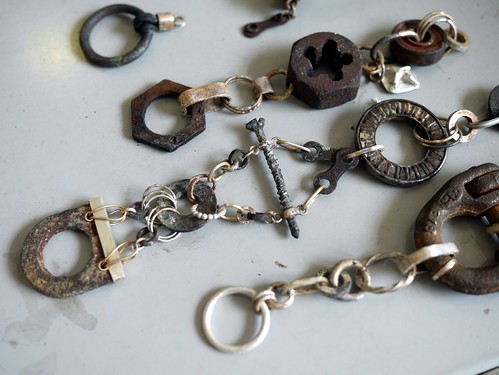 I've been experimenting with not pickling the pieces between solders, which is why they are all still covered in borax!

Spent the weekend in the garden, where my first raised-from-seed flower opened: 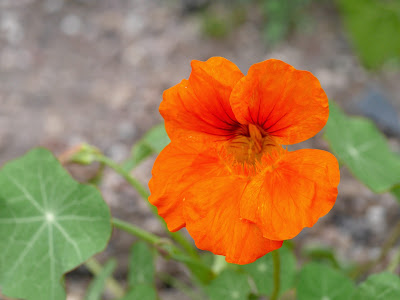 Next week is the build up to the "Inspired" graduate show at the School, external examiners, exam boards and frantic painting and prop-building.

I'll also be getting things together for the Open Days at the School which will be part of the Jewellery Quarter Open Studios programme in July: 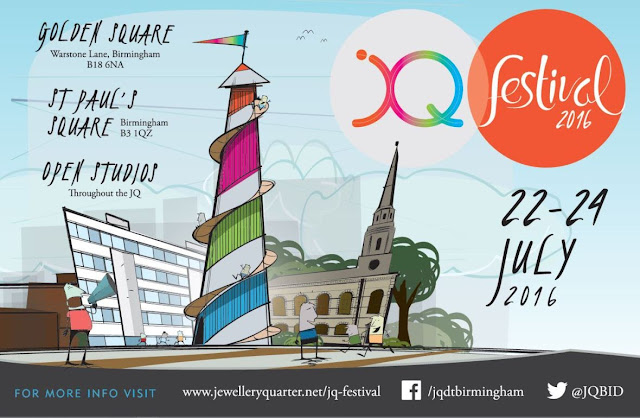 Sounds marvellous! I've been obsessing with the curious scent it has when cooked and have a strong urge to cook it with rose-petals... I'll let you know how that turns out if I do it!

I'll try to get some plums at the weekend and try the compote.

Never heard of tinned rhubarb either, sounds...weird. I love rhubarb too, always have. If you got some time make a rhubarb-plum compote. Cut rhubarb and plums into bite-seized pieces, add a bit of water, sugar and cinnamon to taste. Place in a pot, boil until rhubarb is soft ( a few minutes is all it takes.) Cool. Eat warm or cold, with or without ice-cream. Divine!