Starbucks and yet another Guggenheim 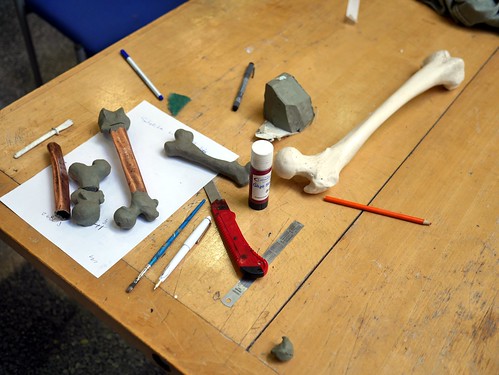 A very full week last week, kicking off with meetings at Craftspace about an exciting project which is coming up in July, about which I will report in due course, and an opportunity for my students to design some very prestigious sporting medals. Mostly, the students have been working on their final projects - term is over in a mere 3 weeks from now - which always leads to interesting things lying about in the workshops: This is going to be a salt and pepper shaker set.

Colleagues, Jo Pond and Drew Markou gave me a heap of old gramophone needles with which I started to construct a brooch: 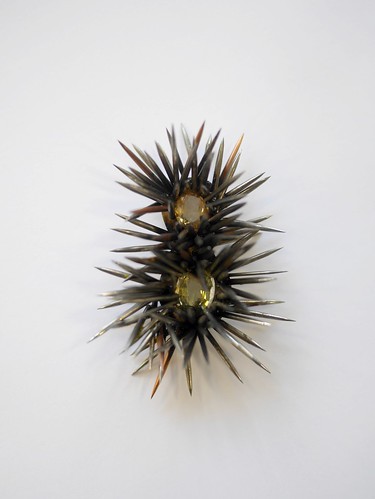 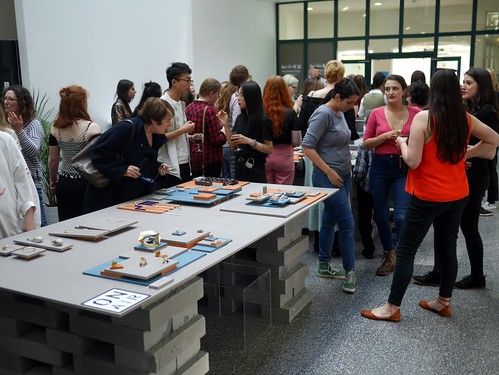 At the School of Jewellery, we have a large programme of Artists-in-Residence (AiR) who work with us, receiving workshop space, technical and mentoring support in exchange for teaching one day per week. There is an AiR for each course taught here and at the end of the year, they put on a show of the work they've made in the course of the year. 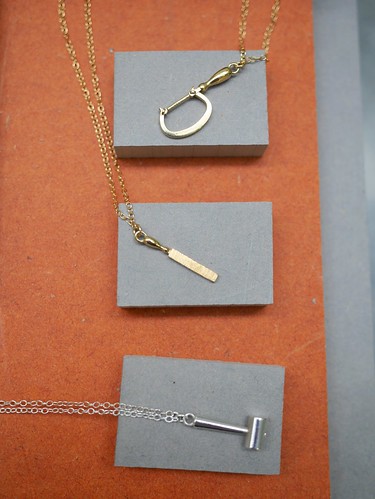 Francesca Urciuouli's work is a sublime playing with layered and fused metals: 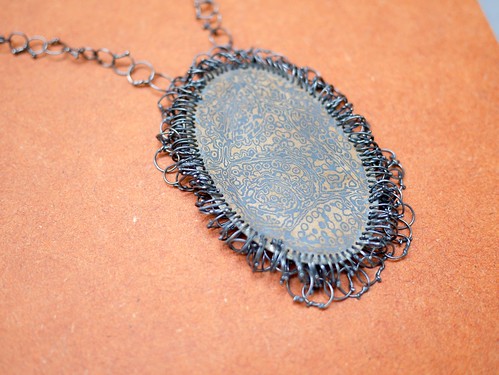 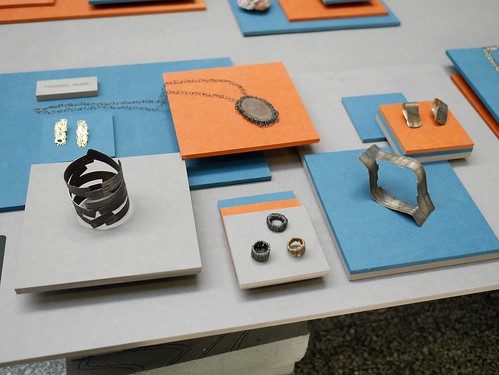 One of my own graduates, Stephanie Holt, has completed a collection of precious metal and resin pieces which are rather lovely: 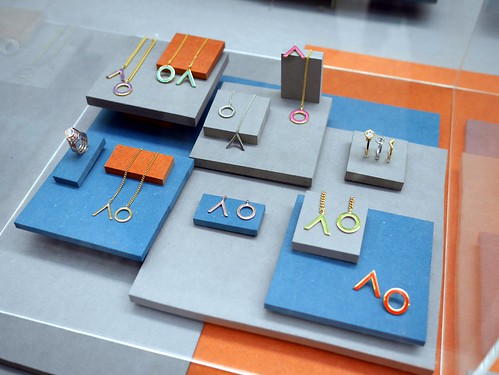 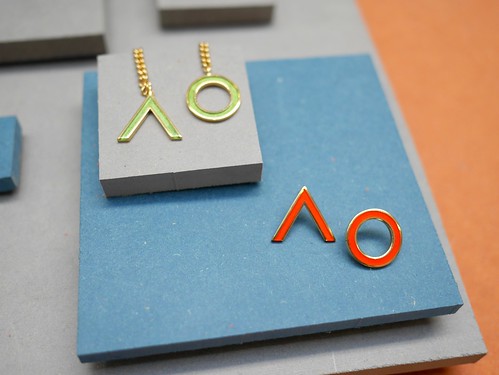 All together this was an excellent show of work from an exciting programme.

Should anyone wish to apply for the Artist-in-Residence programme, details are here.

It is many years since I was in Newcastle (Upon Tyne) and my memories of it are that it was very dirty, very aggressive and violent. On arriving in the city this time, I left the station into a full-scale altercation as a man resisted arrest surrounded by dozens of police officers and a screaming, drunk woman, leaving me somewhat apprehensive: however, like everywhere, Newcastle has changed...

I last saw Einstürzende Neubauten in 2008 when they played The Forum in London. Prior to that, I hadn't seen them since 1983 or 1984 when they played the strange and impossible-to-get-to Holloway College in Surrey. Seeing them again in the Boiler Shop -  unsurprisingly, a converted boiler-shop - seemed much more like that first gig in terms of scale and energy but how things have changed! Nobody seemed drunk, stoned or on speed - the band especially so - and Blixa Bargeld is now very much the 'singer' in a way that he wasn't in the early days. Certainly, he had assumed this role at the time I saw them in The Forum but that venue precluded intimacy. It is perhaps surprising that for a band with a reputation for noise and mayhem, I comment on the importance of 'intimacy' to the experience of seeing them but this is very much a feature of what is being touted as their "Greatest Hits Tour". 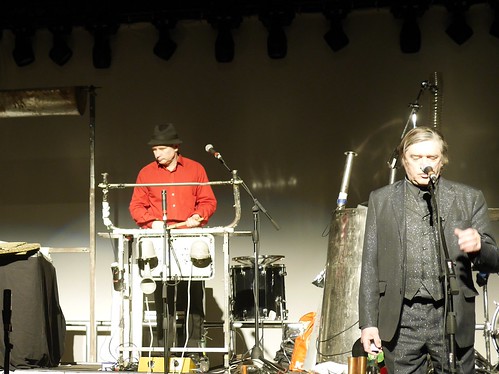 Rather than being the shambolic, dangerous, subversive event that characterised the early days, this was a refined affair, with Bargeld in a black, shimmering lounge-suit, almost louche, tapping into the European Chanson tradition. This was not an angry, aggressive Neubauten but a reflective one, the set focusing on the melancholic and dark songs rather than the noisy crowd-pleasers (though there were a few of those, including "Let's Do It A Dada"), allowing Bargeld to foreground his velvety baritone and impressive falsetto. The ghosts of Gainsbourg and Brel were not far away in the performances of "The Garden", "Silence is Sexy" and the deeply moving "Sabrina". 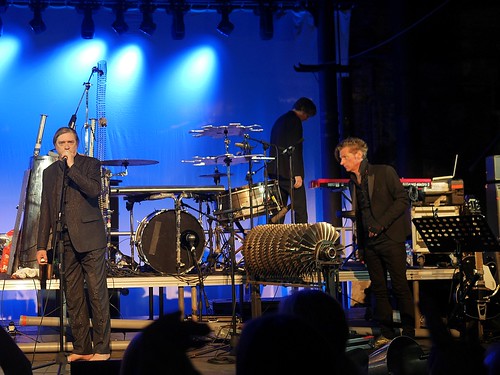 The modernisation of the city has made Newcastle a city of great character and some beauty; it reminds me a lot of my other favourite, underrated city, Dundee; but like so many cities, the danger of modernisation is homogeneity. As Bargeld puts it in 'Youme & Meyou', "'cause out there's always a construction site, a Starbucks and yet another Guggenheim". 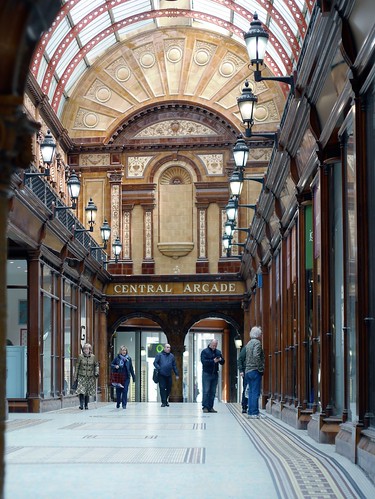 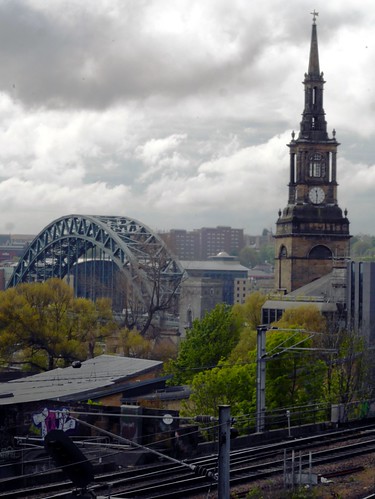 Unfortunately there is too much evidence of the homogeneity.

I regret now that I had to leave the city so quickly and would have liked to spend more time there: the bad impression created by visiting years ago and the incident outside the train station when I arrived proved to be atypical and everyone I met was friendly, cheerful and helpful. Also, there is some fantastic brutalist architecture which I didn't get to explore fully, appropriate for the location of "Get Carter". 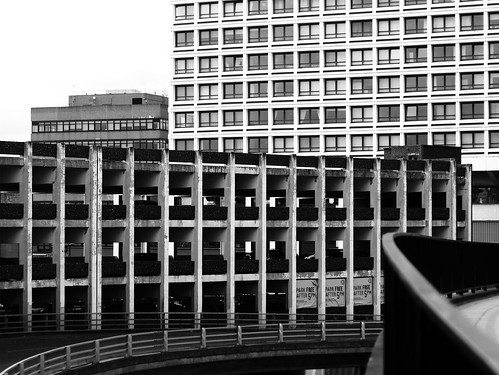 Saturday, back to Birmingham and off to the CBSO Centre to hear the amazing Soweto Kinch and his quartet performing some of his new work from "Nonagram", a suite inspired by numbers. 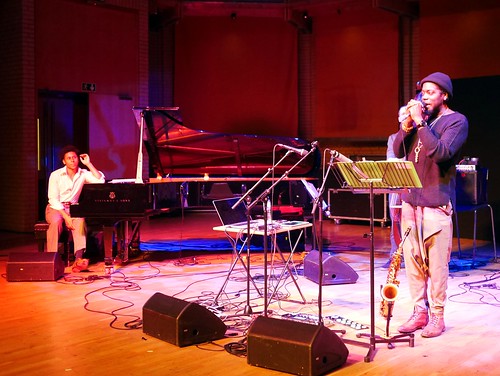 Kinch plays Alto Saxophone and is backed up by a phenomenally talented band of Reuben James on piano, Nick Jurd on Bass and Ed Richardson on drums. Additionally, Kinch uses live sampling and loops to thicken the texture of the band leading to a music which is rooted in 1960s British Jazz without being in thrall to it, bringing in influences from other genres including Hip-Hop, Drum and Bass and the minimalism of early Michael Nyman and leading to a thrilling performance, one of the pleasures of which was watching Kinch enjoying his colleagues' solos.

Most of Sunday was spent in the garden, transplanting seedlings, clearing rubble and digging a bed for carrots.