The Clark Sisters and More 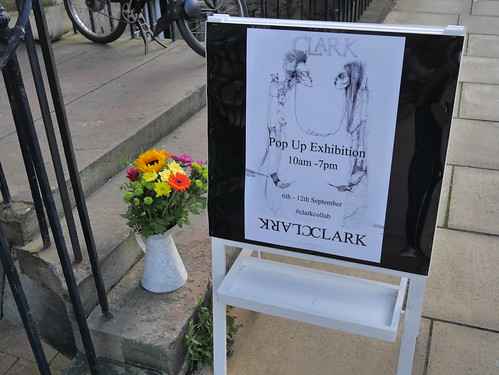 Today I headed off to Edinburgh with one aim: to see the show of work by the wonderful Judy Clark and her twin sister, Christine. I've written of Judy before - commissioning a coat from her - and she's borrowed my jewellery to accessorise her Spring collection but I had only ever seen one drawing by her sister before, one which was hanging in the studio when I visited.

I strongly recommend that you visit if you get the chance. Judy and Christine work in very different ways, both overlapping on an understated but undeniably Romantic idiom and the fusion of the work is subtle and intriguing. The most obvious thing for any fashion designer to do when working with a painter or graphics artist is to put the work on a teeshirt or sweatshirt and they have done this but this does not make up a major part of the show. 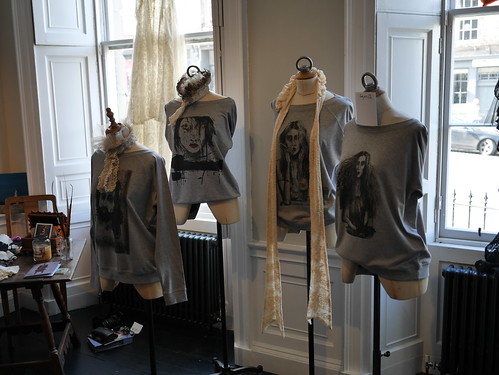 The collaborations on the other work are very subtle... on one painting, Christine has used Judy's lace as a stencil to create texture on the canvas: 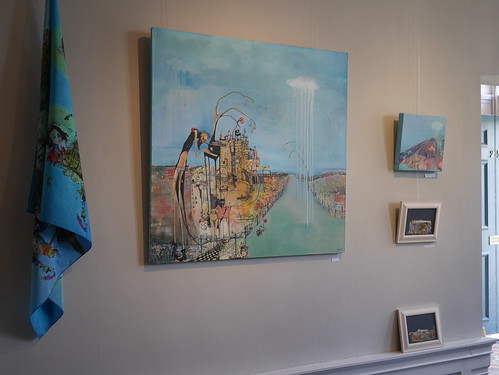 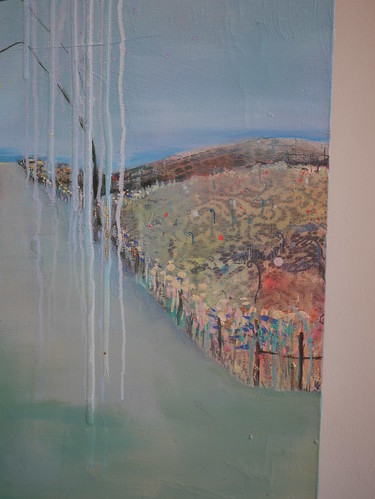 On a jacket, the lining is printed with one of the paintings: 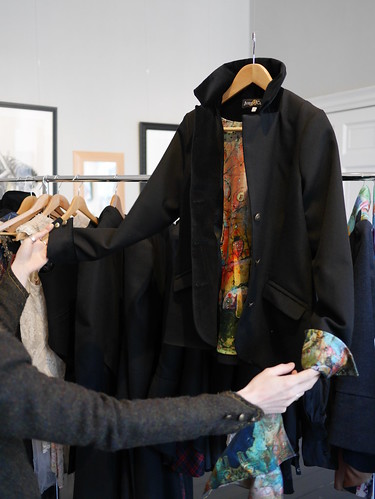 continued onto the cuff detail.

Christine's paintings and drawings were new to me and reminded me very much of Klimt, Schiele, Alan Davie, yet directly reference none of them. There is a humour to them and a darkness to some which really appeals to me; they are essentially narrative works. 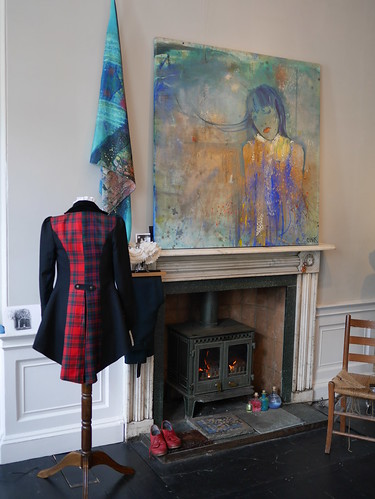 The remarkable thing here is that neither sister dominates. One is just as drawn to the clothes as to the paintings and the gallery - actually a generous patron of the arts' front-room in Edinburgh New Town - is the perfect space in which to appreciate the works. 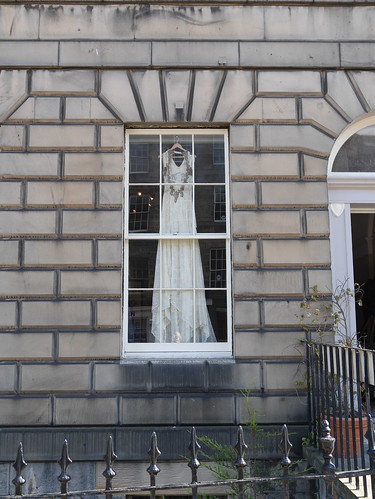 Anyway, I'm raving! I love Judy's work and think that she is creating clothing which is Romantic, deeply rooted in Scottish culture and practical, and I learned today that I love her sister's work too for some very similar reasons.
The show runs until 12th September. 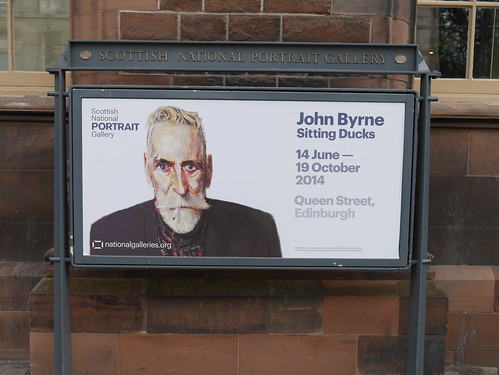 I have been a fan of John Byrne's work - be it literature or artworks - for many years and it was great to see a show of his portraits together in one place, including his famous ones of Billy Connolly and his self-portraits. It was especially good to see some of his more intimate and less-stylised studies of the people in his life - his children, partner, friends - and the letter from René Magritte is a little surprise pleasure tucked away at the end!

I took my camera with me, as always, but have somewhat bastardised it by turning it into a "toy" camera with a £18 plastic lens. In keeping with the lo-fi (hipster!) experience, I set it up to take over-saturated, square-format images. It was an unbelievably refreshing way of taking photographs and although I found myself re-visiting things I had photographed before, it was brilliant to be able to see them in a new and different way.

It's been quite a week in the workshop as I've been working on the collar using the porcelain pipe-stems I picked up when mudlarking on the Thames during the summer. It has taken a while to get started on this piece as I was waiting for the stones to be delivered from Thailand - sapphires, spinels and garnets: 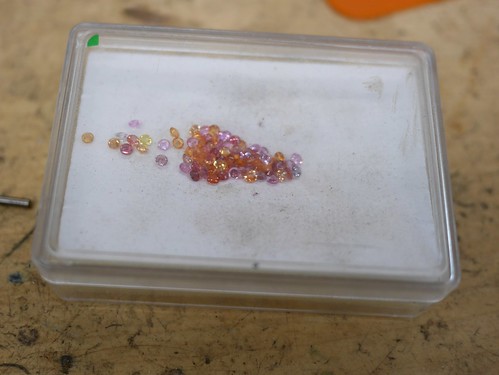 and for the basic elements to return from the casting company: 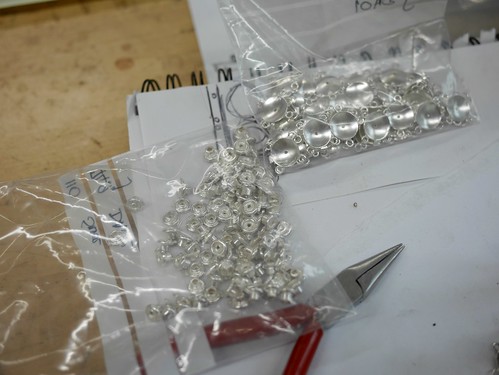 The whole collar will consist of around 100 individually-supported pieces of porcelain pipe stem, each surmounted by a small gemstone and connected to form a mobile "fabric" which moves with the wearer. What I hadn't really thought about was the number of steps required to create each element in the piece... 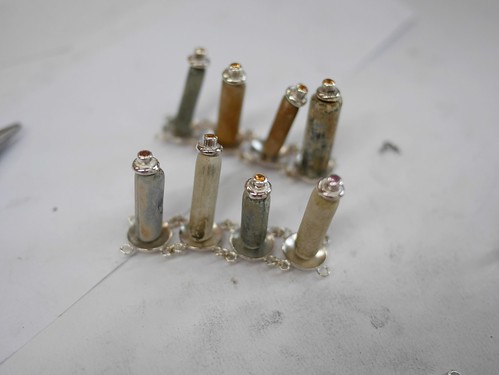 These are the two starting rows to which the catch will be formed. I am working from the outside inwards to the centre, the pipe stems having been graded by length, so these are the shortest. Each stem requires me to make a pin and set the head of the pin with a gemstone: 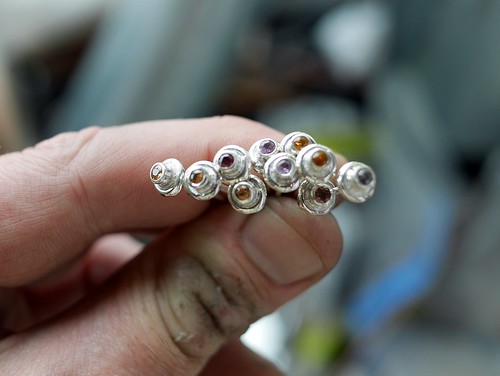 The settings were cast - each one needs to be cleaned up and attached to a wire - and then set; the pin is then put through a pipe stem and this is inserted into the back plate. Each back-plate also needs cleaning up! The back-plates are then joined together with jump rings which are about 3.5mm diameter and because of the length of the piece, each one has to be soldered. There are eight jump rings on the central two plates and six on the outside two: 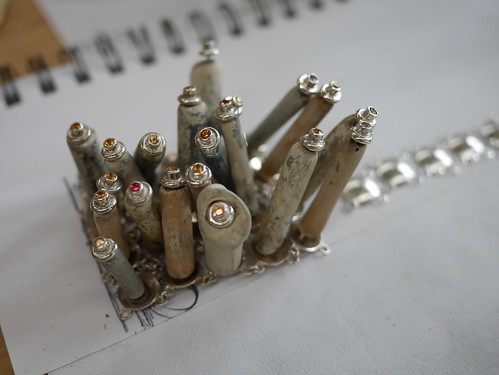 Although very happy with the way this is progressing, I'm particularly pleased with the Paco Rabanne-style back! 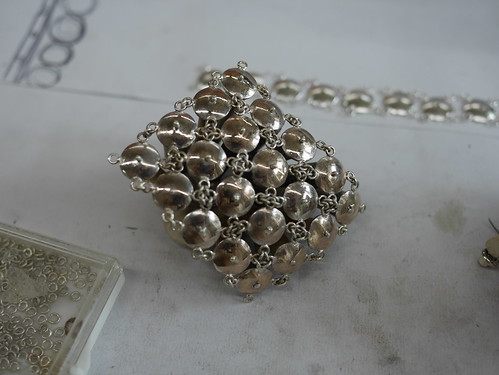 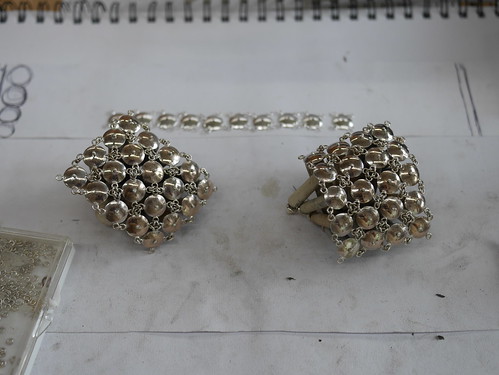 My bench has never been so untidy. 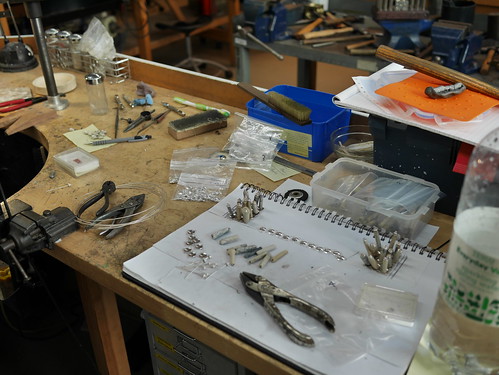