So, at last I have a reliable internet connection and can make a post... I'm home having been at Touchstone Centre for Craft with an intermittent satellite connection - as it is so rural - and in the rented apartment in Pittsburgh where the connection is supposedly broadband but is actually worse than dial-up! I was at Touchstone as a guest of the marvellous Adam Kenney, the director of the centre, a bundle of enthusiastic energy who, when everyone called off from my classes at the last moment, invited me to stay as a mini-residency. Just as well, really as I had no accommodation booked for that week.
Touchstone is a beautiful craft facility in the middle of rural Pennsylvania, near a small town called Farmington. Being absolutely isolated makes for a unique experience, living in a basic cabin in the middle of a temperate rainforest, surrounded by dripping woodlands, rare plants, possums, bears and wild dogs: supplied with excellent workshop facilities for ceramics, metals and glass. The blacksmithing workshops are by far the best I've seen anywhere. My own studio was expansive - even 15 students would have men manageable in the space - and with some exceptions, very well-equipped. I even had a studio technician in the form of the lovely Megan Leigh Gainer. Megan also works in steel and has been experimenting with liquid enamels. After making 'Cold Genius' a few years ago -which utilised enamelled steel from the side of a discarded fridge - I've been considering using enamels on steel in a very casual way. Working with Megan gave me a chance to explore these enamels a little, though I could have spent the whole week doing nothing but experiments with them. Megan is using industrial liquid enamels as a base for the more usual powder enamels used in fine jewellery. My own experiments were somewhat patchy but this gave me a taste for when I return home. 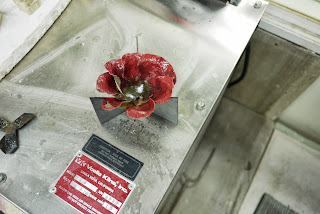 My main resource at Touchstone was the blacksmithing shop, where I found some marvellous materials, including rivet heads - a return to an old favourite for me - and thick expanded mild steel sheet for fencing. This thick steel became a bangle: One of the great things about Touchstone is that it gives the opportunity to see other craftspeople at work and we went to workshops in felting: One of the highlights of the week at Touchstone was the fundraising auction. I can't quite explain how funny this event was as some of the studio assistants took on the role of auctioneer for the night and we were all encouraged to buy works by the makers who were teaching. I was delighted to buy one of the pots shown above as well as a "good luck spice spoon" made from a horseshoe nail! My own entry was a pair of rings with rivet-heads on top which proved so successful that I had to make another: Historically, Touchstone has been bit of a hippy community and although it is not so much like that any more, it has some odd elements remaining. I found this dreadful book in the workshop: Which contains probably the worst illustration of a piece of "jewellery" that I've ever seen: I loved being at Touchstone and have already been in discussion with Adam with a view to returning in 2015. More on my visit to Pittsburgh tomorrow, now that I have proper internet access. As Dingo has just pointed out, "I can't believe we went to America and couldn't use the internet... they invented it".