Welcomes and Inductions and More 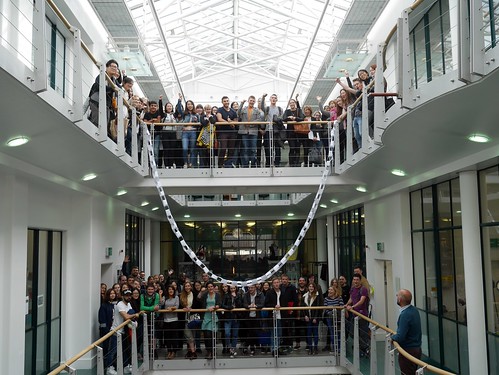 The new intake of students were in this week: gemmologists, horologists, jewellers, silversmiths, CAD designers; the new HND, BA, MA starts. It was brilliant to be in the school when it is buzzing and we spent Monday avoiding horrible "ice-breakers" with much better ways to get people to know each other, such as making a gigantic paper necklace for The Atrium. The Atrium in the school is such a great resource and it gets used constantly for exhibitions, teaching, drawing, socialising, relaxing, studying and setting up little sales and demonstrations, which is how it was used this week. We're SO lucky being bang in the middle of the jewellery quarter as it means that tool suppliers, gem dealers and bullion dealers are quite literally just across the road. This week they came to visit: 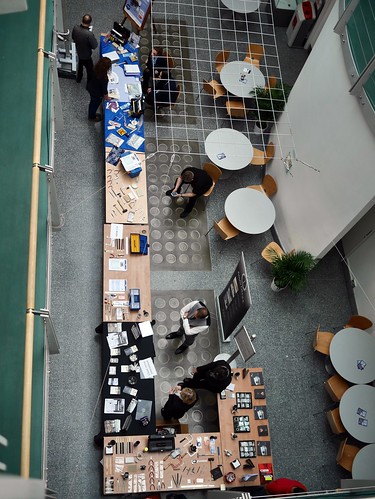 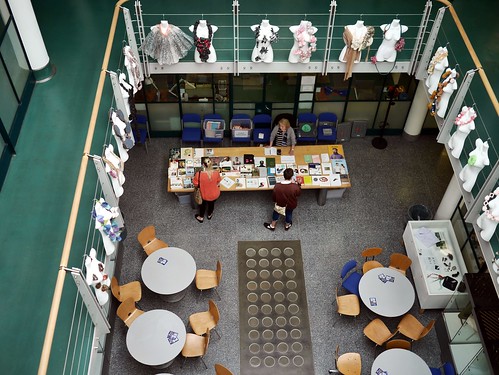 I forgot to photograph this when it was alive in the early afternoon and these were taken towards the end of the day, so it is quieter. I think that Chrome Yellow books (lower shot above) sold more books to the staff than to the students!

Cooksons, said bullion dealer across the road from the school were having an amazing charity cake sale with lots of delicious cakes made by the staff there. The School of Jewellery staff made several forays: 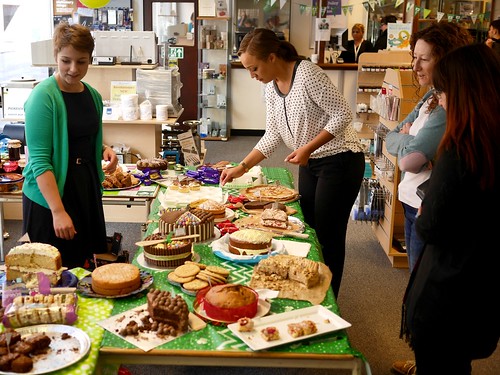 The weekend was lost in a whirl of arts activity as the Birmingham Weekender kicked off. I met up with a good friend and headed off for some new music. First up was the performance of a new work called "Requiem to Let" by Michael Wolters in an abandoned shop in the Western Arcade. 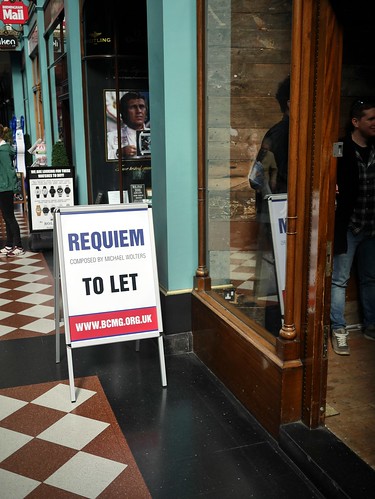 In keeping with the Birmingham Contemporary Music Group, this is a challenging piece for solo instrument and electronics. More challenging in this case because we had to sit on a hard floor for an hour while it was performed... The piece was played on Bass Clarinet by Jack McNeill. 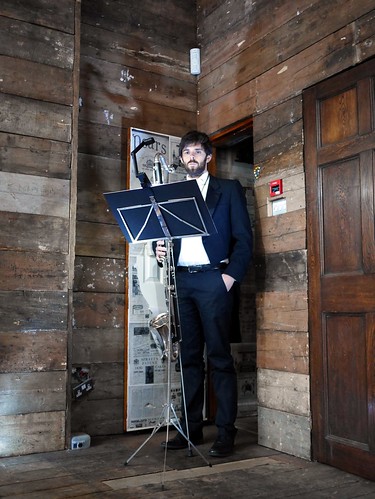 (Look at the floor we had to sit on!)

We followed this up with a bit of Klezmer music by She'Koyokh in the square outside the town hall: 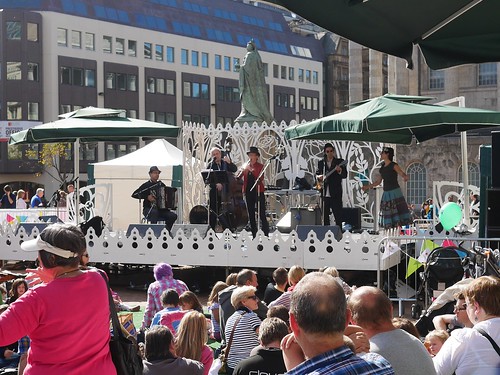 Which was superb but we had to leave to be on the way to our next performance, "The Waiter's Revenge" by Stephen Oliver and sung by Birmingham Opera Company. A miniature opera (20 minutes at top), this is wordless and sung a capella, the musical noises conveying all the meaning. 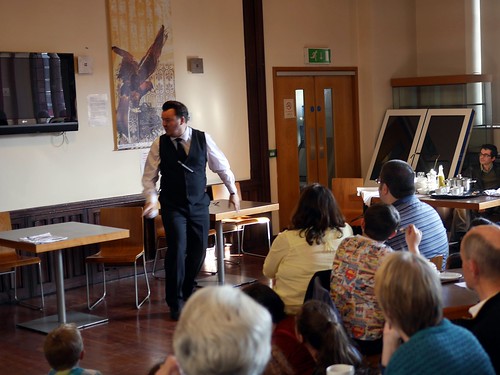 It was performed in the tearoom of St. Martins in the Bullring with people sitting about drinking tea: very funny, very silly and performed brilliantly. 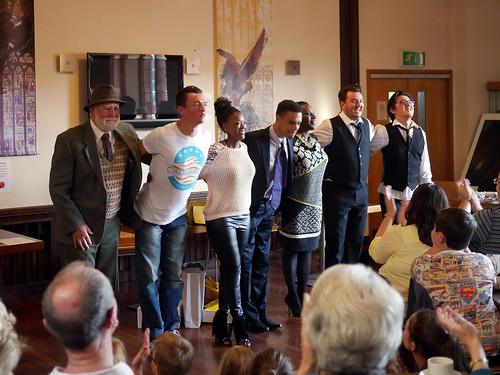 After a delicious dinner from one of the street-food vendors dotted about the place, it was off to Centenary Square for the highlight of the day. A strange and ritualistic performance by French acrobatic percussionists, Maudits Sonnants. This was odd and engrossing: it felt like something mediaeval, echoes of Punch and Judy, of the York Mystery Plays; yet was completely modern. 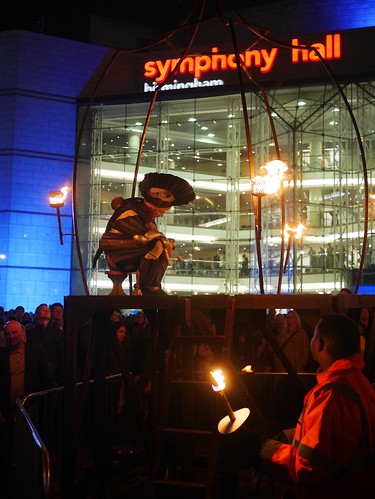 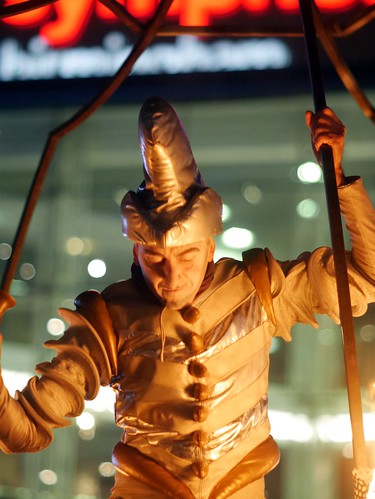 After a crowd-pleasing but somewhat incomprehensible opening around the arena, the performers moved into the centre rig and began to climb... 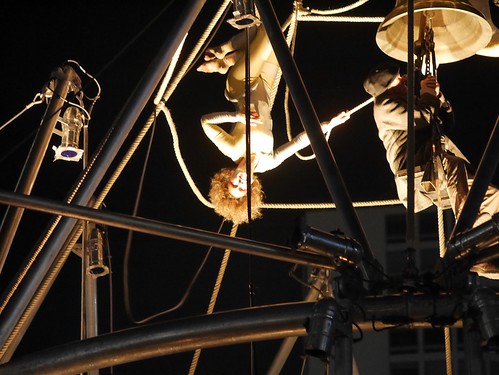 And began to play their percussion instruments... 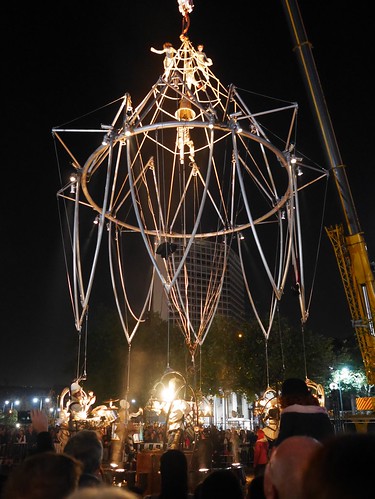 And were raised up above the crowds, playing the whole time on bells and drums... 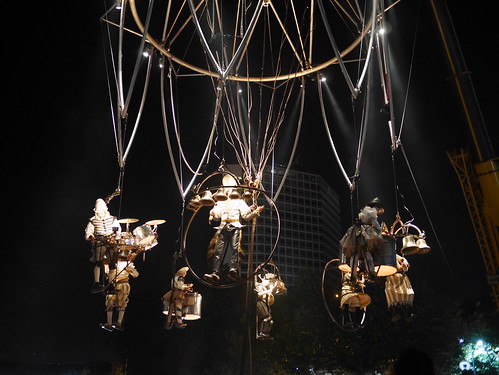 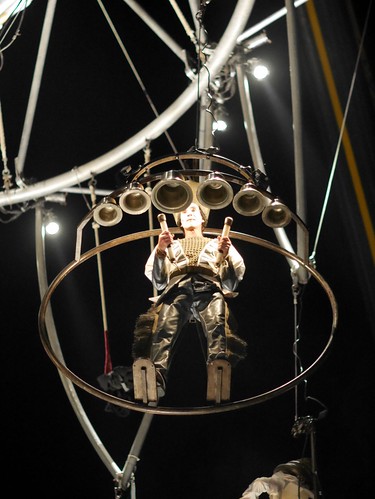 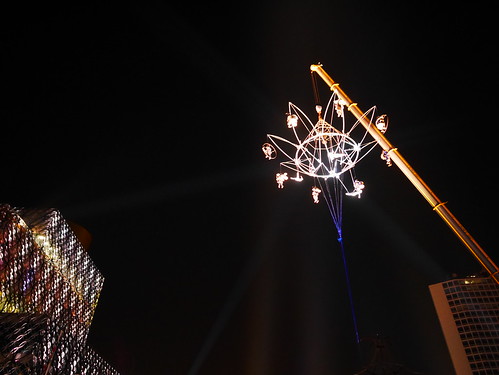 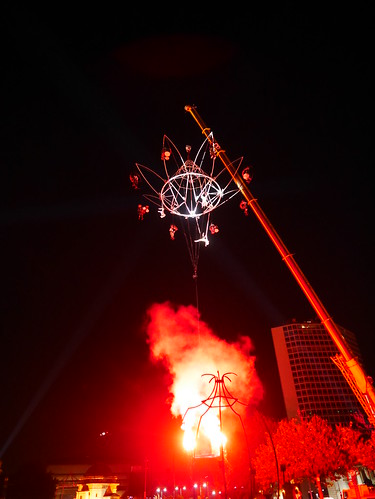 Before coming back to earth to ecstatic applause. 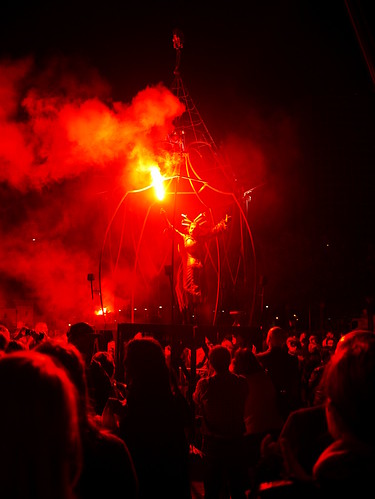 There is a short video of part of the performance here -

Today I was back in town to meet up with one of my ex-students, ex-technician and ex-employee at Thomas Fattorini, Fiona who is now working in a quite other area than jewellery and is no longer in the jewellery quarter. After a minor fiasco with the place we planned to eat, we ended up in my favourite Cafe Soya again! Excellent catching up.

On the way home, there was a giant puppet in Centenary Square: 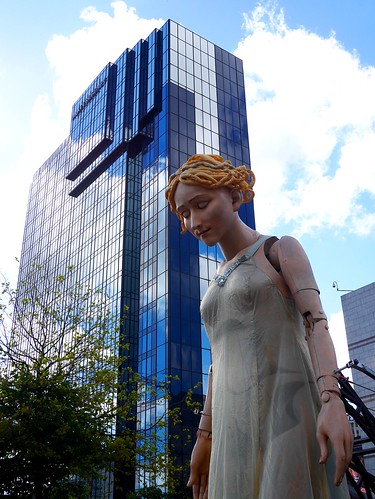 Time to brag a bit!
The Scottish Gallery has done the ACJ (and me, specifically) proud. Their webpage promoting the show in Edinburgh in October is superb and prominently features my "Pulling Rabbits Out of a Hat" watch and chain. As always, you can even browse or download the catalogue on the website if you can't get to the show. I do like The Scottish Gallery: they just get it right. 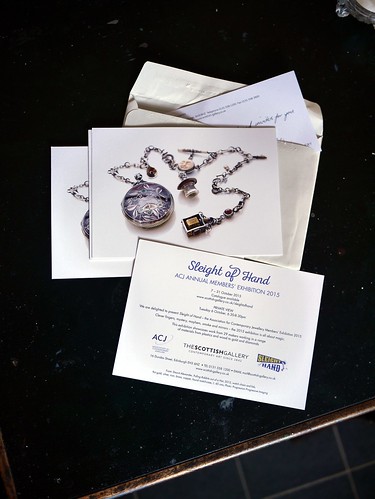 Here are the invites to the private view, which I received yesterday.
Just wish I could go!

Students in the workshops tomorrow and my first proper teaching at the School of Jewellery.