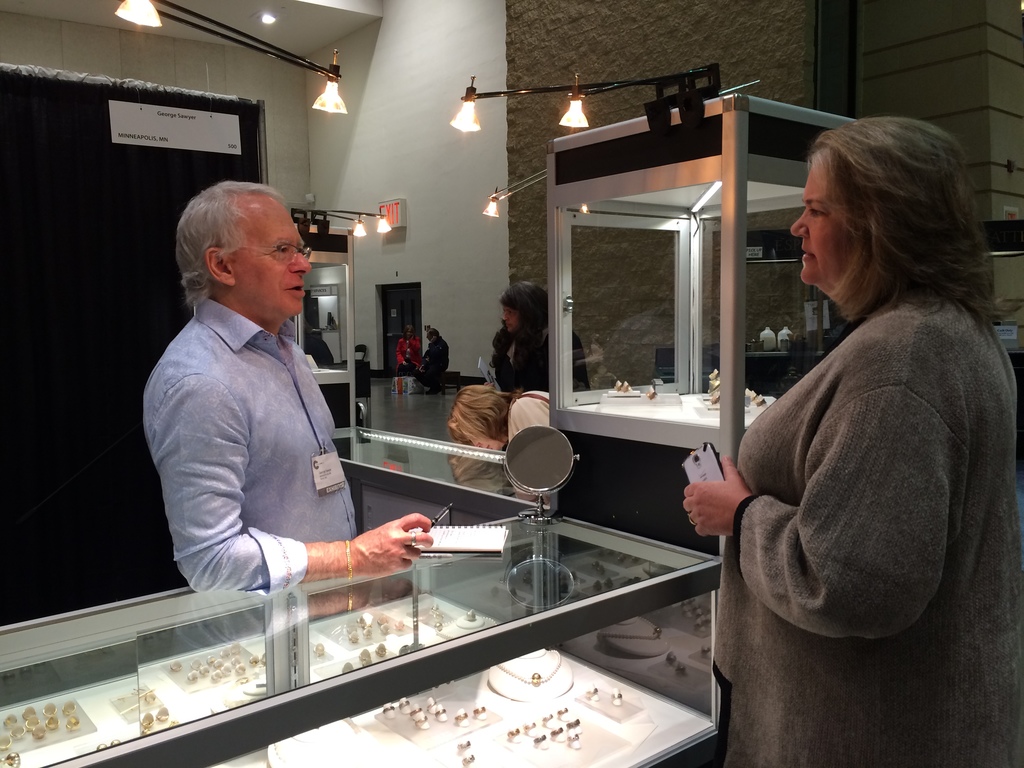 Crafthaus: Planning the layout of a huge show must be difficult to manage. Does the layout ever change or does it usually stay the same?

Melanie Little: Sometimes a layout has to change for reasons outside of our control. The Wholesale Only group and the Retail Only group for instance, these sections occasionally had to move within the building. One time, they could not all be on the same floor but had to be on two floors, and some artists were quite unhappy with that.

Last year, due to the high demand for corners booths, I decided to do everyone a favor and change the layout to have more corners booth available for our artist. In all honestly, it looked real good on paper, but when I got on site I realized, "Okay, it doesn't really work so well." So, I did make changes again this year and I hope the layout is better for all.

Aside from the booth layout, there’s also other things to consider, such as where the electrical outlets are, if the room has columns that cannot be moved out of the way, and then there's ACC-specific programming that we're also trying to fit in. 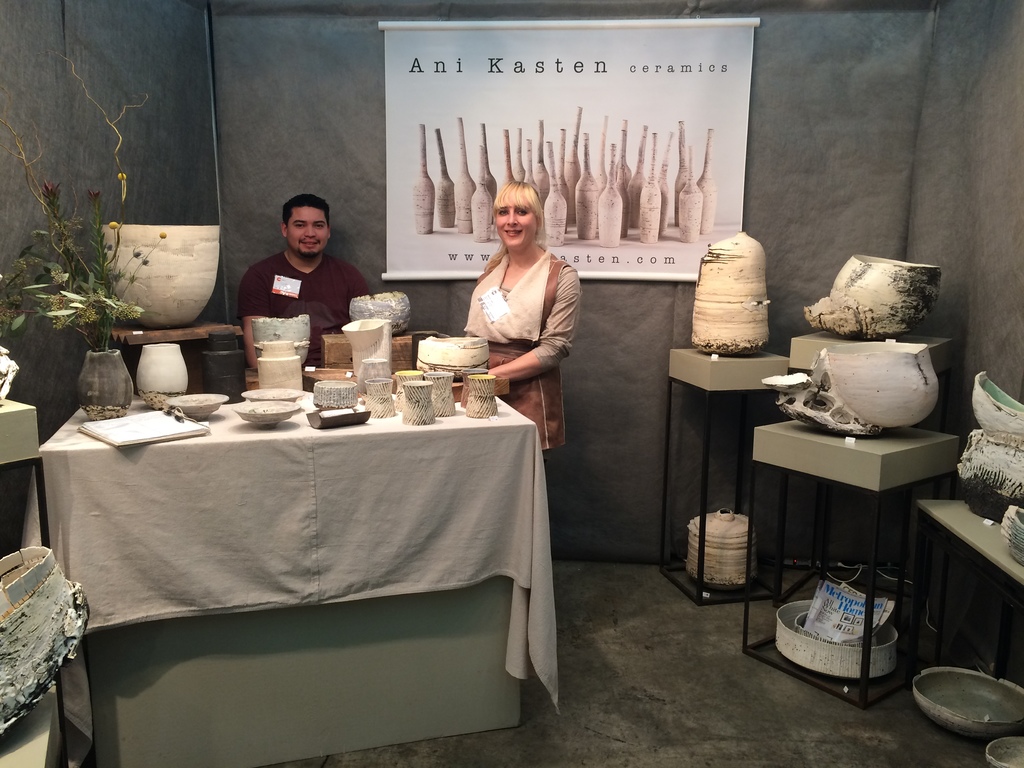 Crafthaus: Do artists typically aim to get the same location every year or do you have to switch them around?

Melanie Little:  I think we are pretty generous in what we're trying to do. We ask people to tell us what their first, second, and third booth location choices are. They can also let us know if they want to be next to certain other artists, or if they want to be in the same general area as the year before. I have a group of 10 people who all want to be in a block together, every year.

For specific location requests it’s best to give me that information early, not at the last minute. I really try hard to get people into the slots they want to be in. That is a daunting task. I handle the booth assignments for Baltimore myself and I work on that over a two-month period to make everyone happy.

All incoming location requests are time stamped to the minute because sometimes 30 people all want the same booth. It’s important to me to be fair, so I go by when the form comes in. I even reach out to certain artists and say, "Okay, I can't get you in that corner in that area, but I can get you in the corner someplace else." Probably, 60% of artists come in with very specific booth request. People sometimes even call me to get the booth they want, and I always tell them that I strictly go by the time stamp on the incoming requests.

I also honor change requests if I can, I do this for every show. If someone cancels, I reach out and ask if people want to move to a spot they originally wanted.

Melanie Little: Yeah,... I mean, that's part of it. That’s what we should be doing. 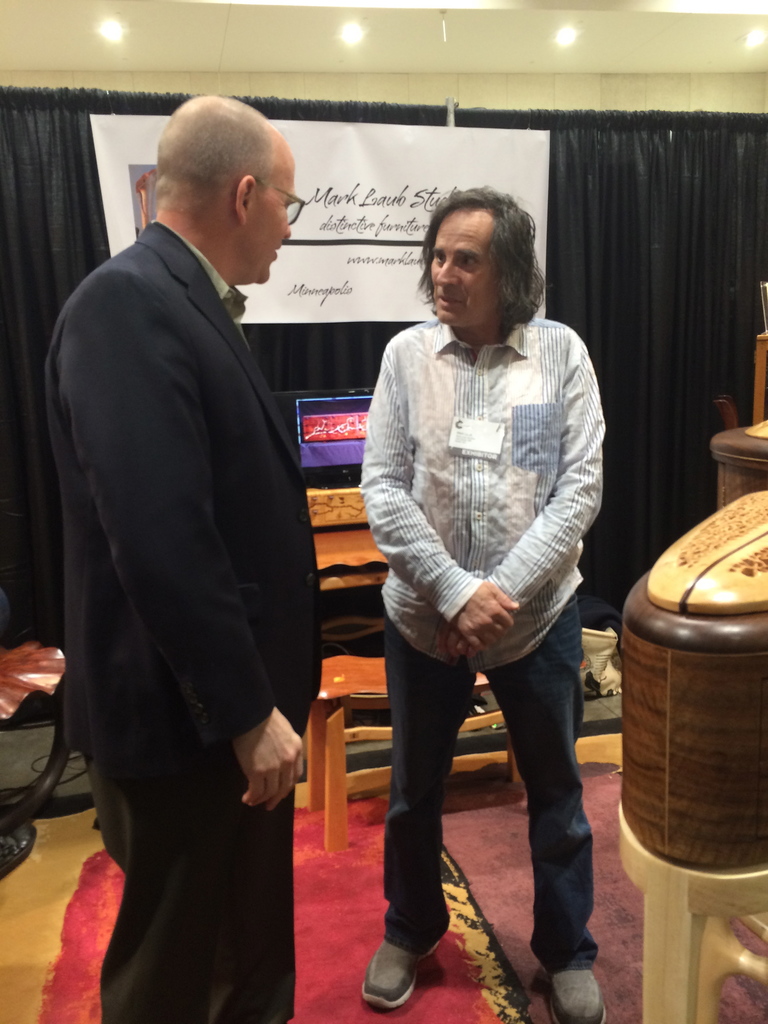 Photo: B. Martin for crafthaus

Crafthaus: What are the booth sizes that are available?

Crafthaus: If people go to the ACC website, they can find all the price information and what’s included, right?

Melanie Little: Yes. If you go in to our website, go to applications. A prospectus will be there that lists all the prices. (http://craftcouncil.org/shows/apply)

Crafthaus: Let’s talk about ACC polices. Are demos allowed? Do you encourage them? Do you find them helpful?

Melanie Little: I like to see somebody in their booth and they are actually creating their work there. I think that's great.

Crafthaus: What kind of demos don't you allow? Something to do with fire? That’s probably not a good idea...

Melanie Little: Not a good idea. Once we did that in San Francisco, but it was outdoors. The fire code just won't allow for fire inside most public buildings. 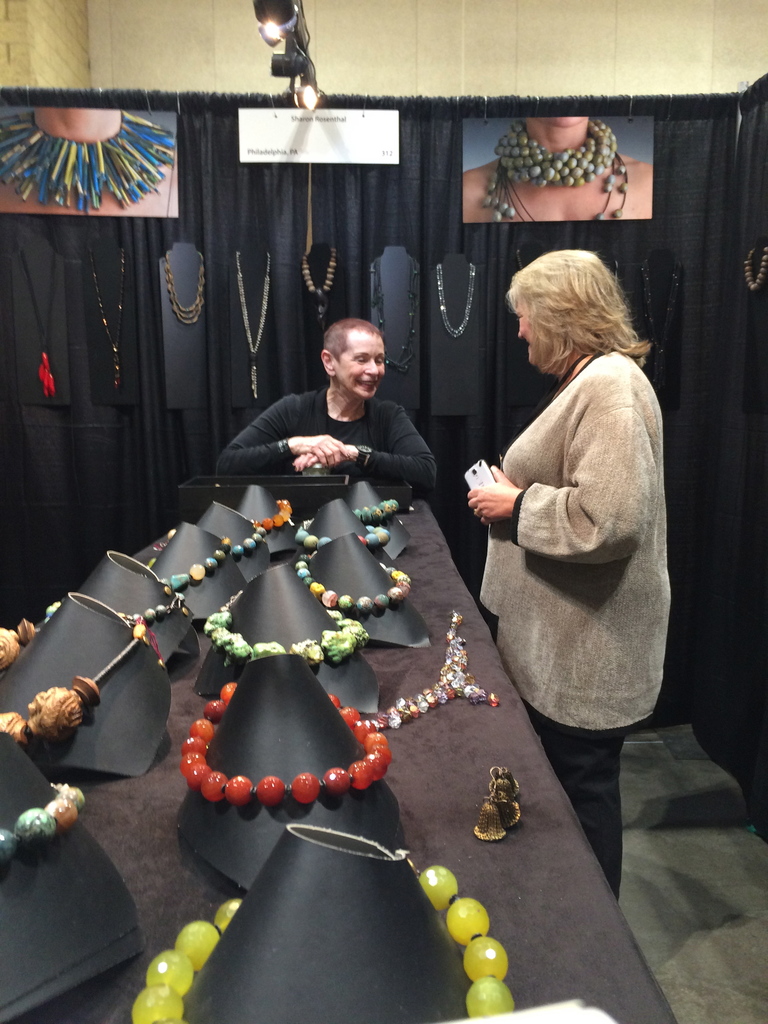 Melanie Little talks with Sharon Rosenthal in her booth at the 2016 ACC St. Paul show. Photo: B.Martin for crafthaus.

Crafthaus: Is there something like a recommended price range for artwork in the show, or can everybody basically do whatever it is they want?

Melanie Little: Anybody can do whatever they want, we are just saying we want to be able to offer the visitors a wide range of pricing.

Crafthaus: What is your policy about non-handcrafted items? Do you have a policy in place about what you allow at the show and what you don't allow?

Melanie Little: I don't want to say that there's a full policy in place. If you look at our prospectus, we do list the things that are not allowed in our shows. When we are on-site, we (the ACC show staff) look at the work in every booth to make sure that there's not something there that looks like it’s not hand-made.

Crafthaus: When you do visual inspections through all the booths, what do you look for? What would be grounds for not re-inviting an artist?

Melanie Little: We have to have good evidence that things are not hand-made. If I saw something stamped "Made in China", they’d be out, of course, but there’s really not a huge number of people we ever had to remove from the show.

Crafthaus: The jurying process obviously takes care of most of it beforehand, however, sometimes work looks very good on photos, but when you see it in person, it can be a disappointment. These kind of discrepancies, you would look for them, right? Interesting clothing made from Tyvek. Mau Schoettle at the 2016 ACC Show St. Paul. Photo: B. Martin for crafthaus.

Crafthaus: What kind of security is provided at the venue?

Melanie Little: We have a huge amount of security. We hire a company that oversees all of the security for the show. There are people at every exit, every elevator, plus overnight security. We have security for jewelers, which is armed police, so they can bring their work to a room where it's locked and guarded by a police officer overnight.

Crafthaus: Is the work automatically insured through you?

Melanie Little: No, there is no insurance through us. The artists have to take care of that themselves.

Crafthaus: Is free Wi-Fi available for the exhibitors and the customers?

Melanie Little: We offer WiFi for the artists, it's $125 dollars for the week, but it's not available for the visitors. 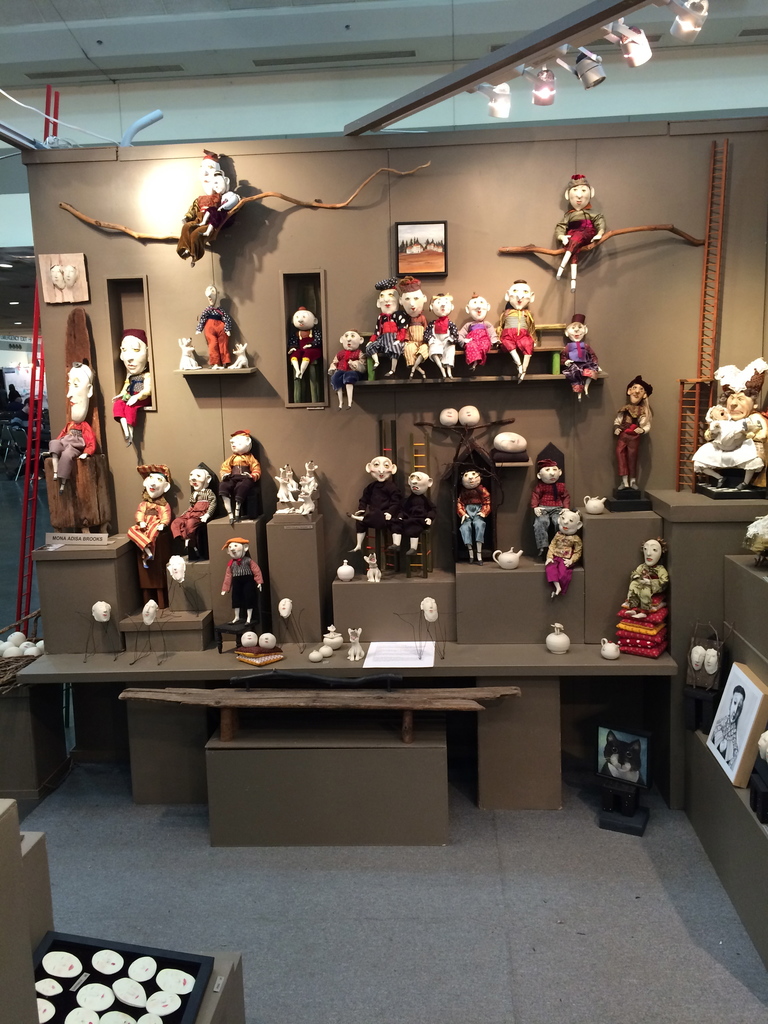 Dolls at 2016 ACC Baltimore show. Photo: B. Martin for crafthaus.

Crafthaus: Let’s move on to logistics. When the artists arrive to set-up their booths, when they all come at the same time with their vehicles up to the ramps, that's got to be chaos. How is this handled logistically? Do you give people certain times to show up and you kind of just stack the time slots so that not everybody shows up at once? How is this done?

Melanie Little: Many, many years ago, we did it like that, we assigned time slots and we stacked people so that not everybody would be there at the same time. That didn't really work well because some of the artists only needed one day to set-up and they didn't want to come a day early to fit into an assigned time slot. Maybe 8 years ago or so, I took a gamble, and thank goodness it paid off. I just said, "Everyone, your set-up days are Monday and/or Tuesday, come whenever you want between these hours." And I held my breath, and it worked.

The move-in really works well every year. We have 4 days of move-in, there's hardly ever a line. In most cases, the artists can even drive their vehicles immediately up to their booths.

Crafthaus: How about the move out?

Melanie Little: That's another story and that's always been difficult. I think one of the biggest things that I'm trying to explain to artists is that we move all of them in over a stretch of four days, and now we need to move all of them out in one night!

Here’s the timeline: The ACC show closes at 5PM at which point, but not before, all the artists start the break-down process. Everyone has to have left by midnight that day. That's 6 hours for 670 booths. The whole ACC show has to clear out entirely in that time, because the next show is already coming into the venue.

So, with that very short time slot in mind, there’s going to be a line at the door, there's just no way around it. Artists would like to have their move-out go like their move-in, where they bring their vehicles right to their booths, but that just cannot happen with the move-out because everyone’s breaking down their work at the same time. Everyone is putting all of their work and their booth components into the isles, which means that now no one can get through anymore. Especially not with cars.

Also, at the end of the show, we have to clear out all the restaurant tables and chairs and the actual restaurant itself. We have to get other things removed as well, such as the Let’s Make Stations and our own booths. Also, we have to get the visitor crowds out. The public sometimes takes quite a while to leave, security usually helps to get them out the door.

I do know that last year there were issues with the move-out, and I've been dealing with that. I have started a facebook group to help with ongoing communication between artists and the facility. This year, my whole team will be there to answer questions, and I will be driving around on a motorized vehicle to monitor the whole thing and assist to make sure it all goes as quickly and smoothly as possible.

It is a lot that has to happen in just a few hours.