On Saturday morning, February 26, I attended the lecture and demonstration by Michael Dale Bernard. Michael is a talented, young and humble artist out of Long Beach, California.  Matched with an outgoing personality, Michael creates stunning and engaging work.  His imagery is inspired by city life, street art, and a quest to create commentary about the world around him. Michael creates precise work that often overlaps multiple layers of metal using elaborate piercings to create illusion. 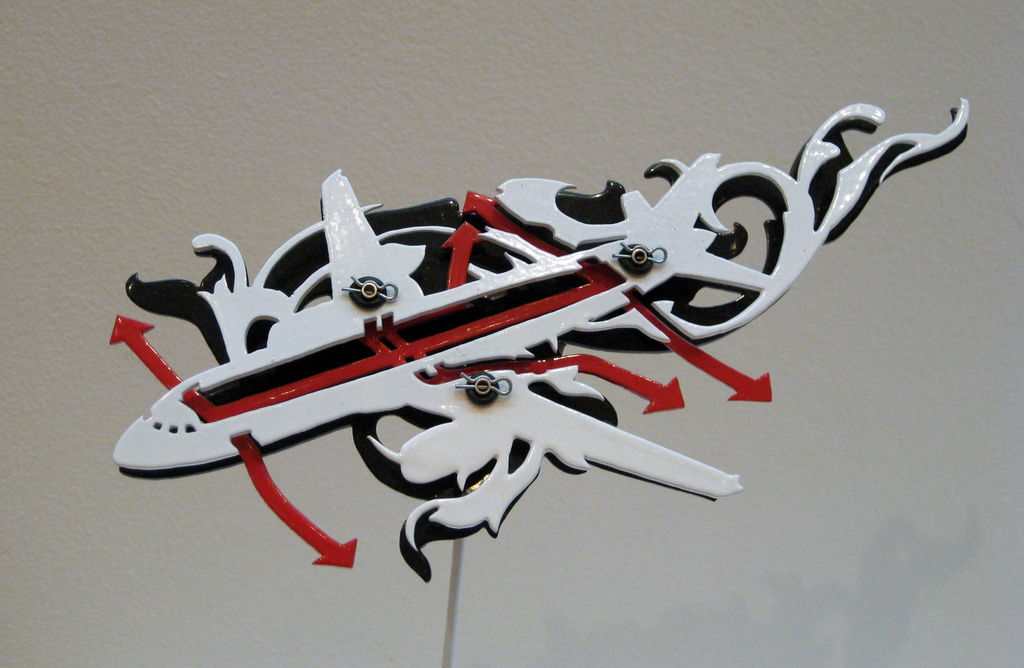 The powder coating finish mimics his interest in graffiti and city life.  Michael showed slides of his work followed by a demonstration on powder coating. Before his demonstration, Michael created a well-edited video of the powder coating process.  He used a 1980s corny infomercial style that kept the audience rolling with laughter while being informed about safety and the process of powder coating.  This video was a strong addition since there were so many people that wouldn’t be able to gather around the powder-coating set-up located just outside the lecture area. 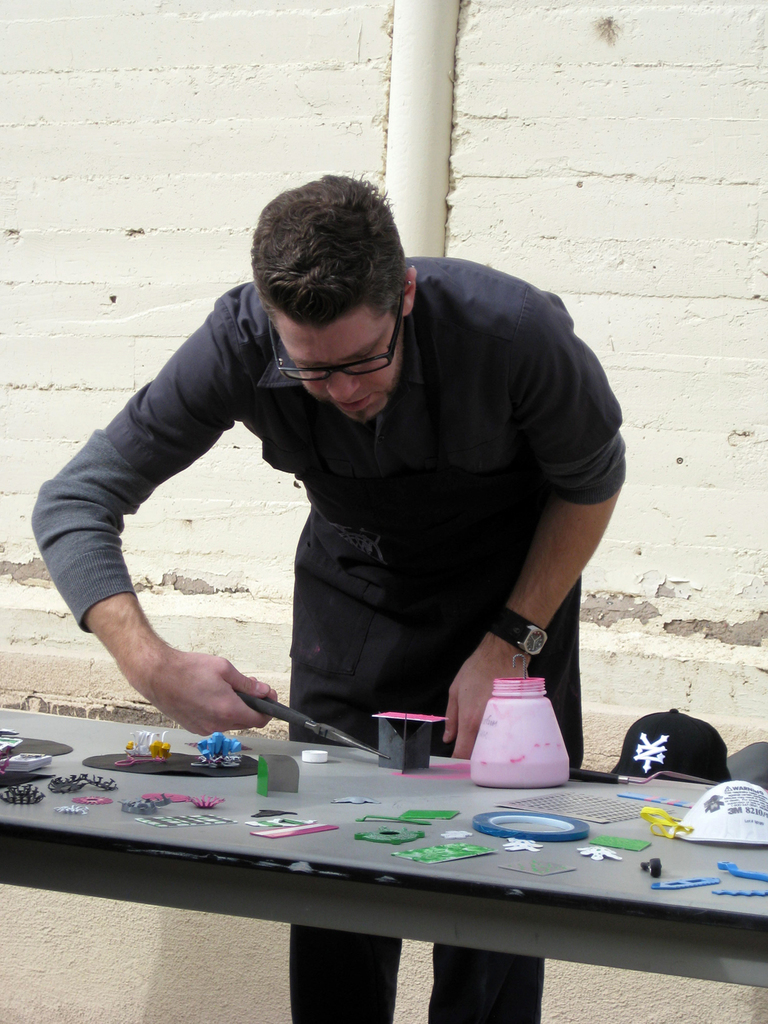 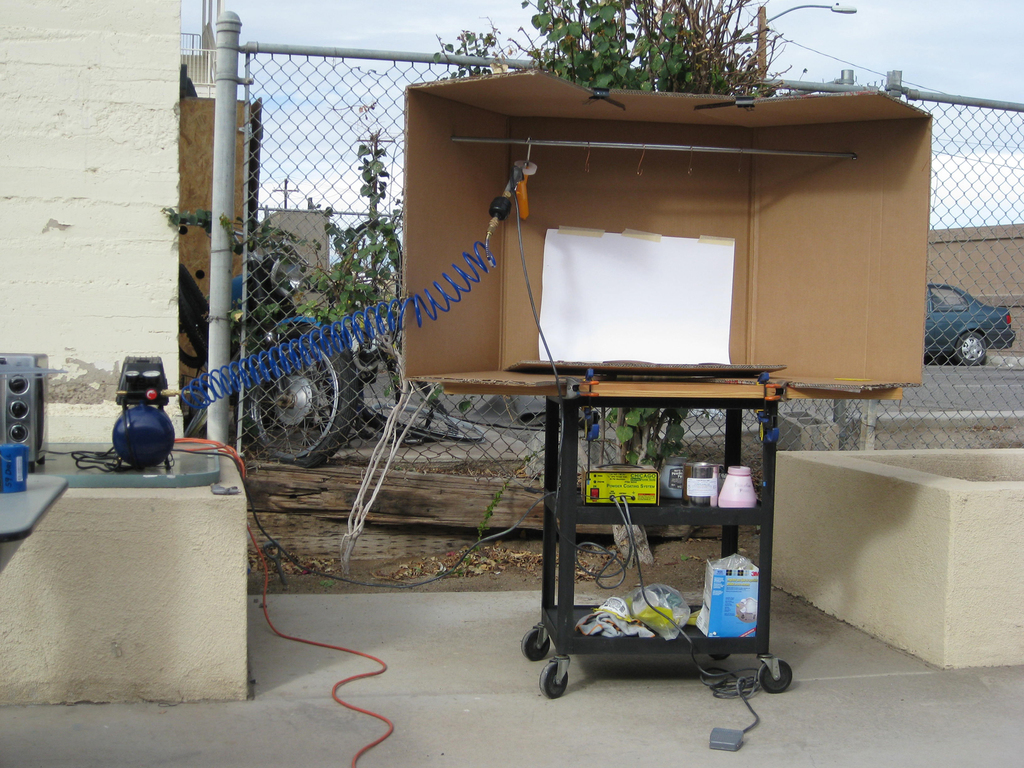 I found his knowledge of material and technique impressive as the audience grilled him with questions.  He did a wonderful job and gave a great lecture and demonstration. For more on Michael, check out http://www.michaeldalebernard.com. 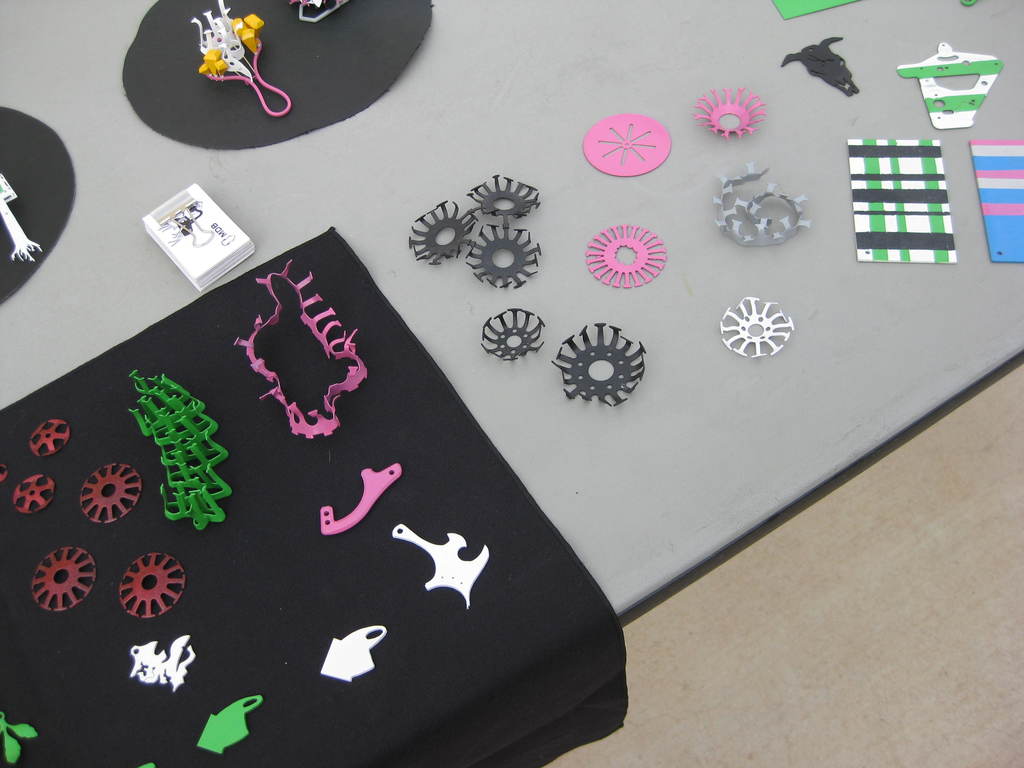 Directly after Michael’s lecture, I tracked back to the Yuma Theatre to view part of Brad Reed Nelson’s lecture about his work.  Brad and I found out at the Pin Swap (on our first meeting) that we both attended graduate school at Arizona State University.  He studied predominantly in woodworking.  This occurrence isn’t rare at Yuma since it has a strong history of allegiance from the ASU community.  However, the coincidence became really impressive when I found out that he studied with Paul Sasso at Murray State University in Murray, Kentucky.  I too was a “Sasshole” studying woodworking with Paul.  These are the small world coincidences that I enjoy.  Brad showed the progression of his work and his love for furniture and strong design. 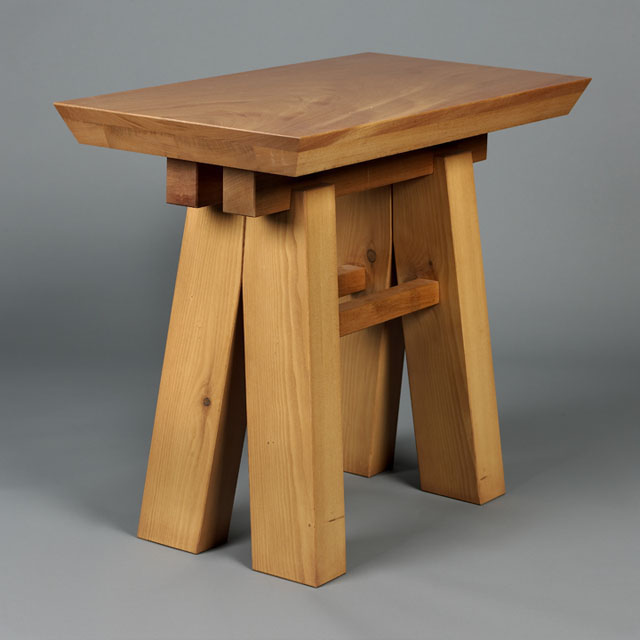 I bugged out a little early from Brad’s speech as I’m a demonstration junky and wanted to catch the tail end of Lana Wilson’s clay demonstration at the NECC.  For more information about Brad's work, check out his website.

Lana Wilson was discussing the use of color with paper clay. 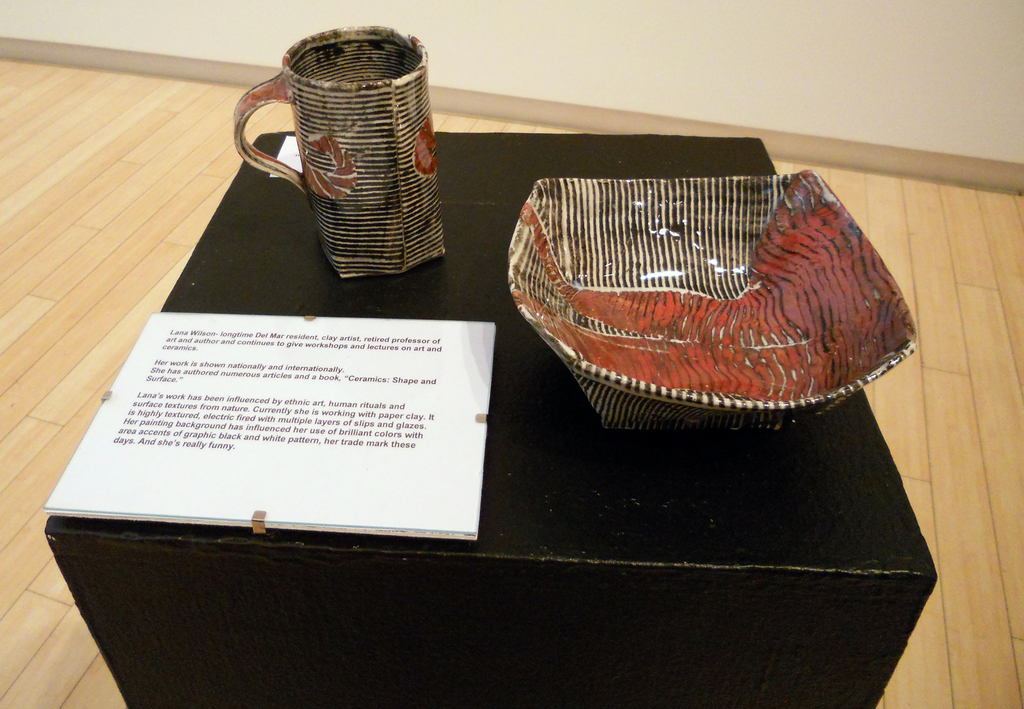 She showed multiple scraffito techniques and fast vessel making techniques.  Lana’s demonstration was much like sitting in the kitchen and learning with Julia Child.  Lana had prepared multiple stages of her demonstration that allowed her to leisurely work and tell stories.  She showed passion for experimentation and was especially inspiring to me as an educator. 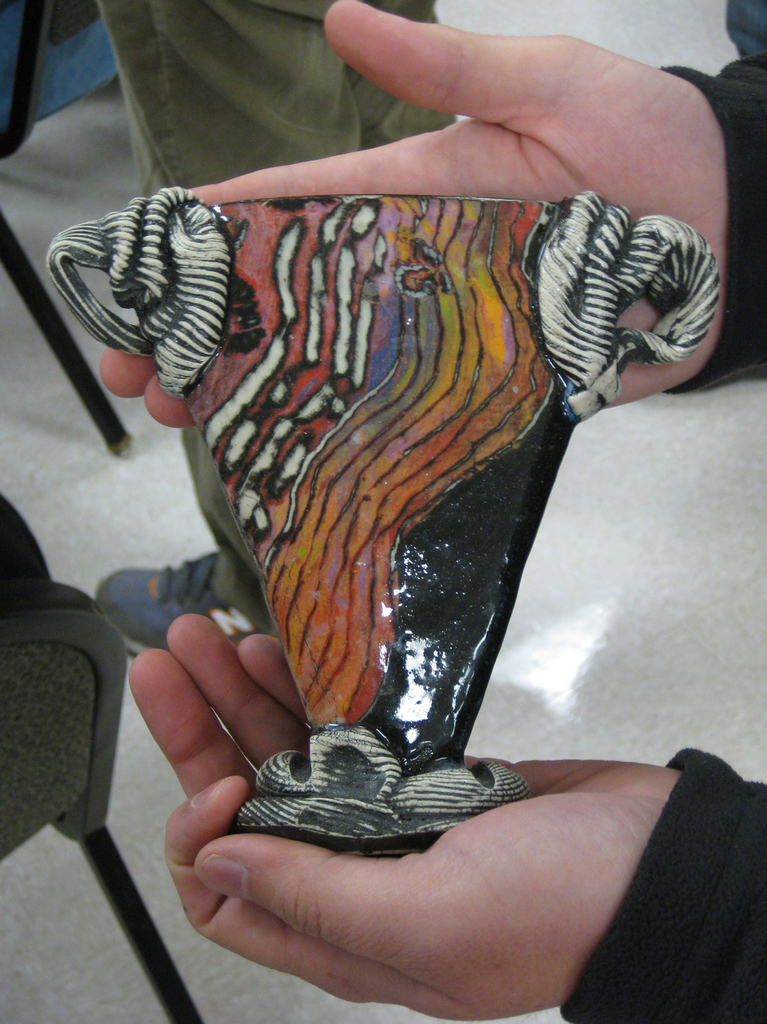 As she was trying something new, she would say “if it doesn’t turn out well, just don’t say anything.”  Her humor kept the crowd coming back for more. She also said that in demonstrations, she tries something that she’s never done before in a workshop.  It makes things interesting.  She would rather continue a process to figure things out and teach herself about the material than try to save the form and force success. I especially enjoyed her heartfelt comment “I feel incredibly lucky to have stumbled upon art.”  I felt like I was writing down quotes and trying to remember the moments she discussed art and the reminders of why we do this work.  She gave out thorough worksheets so that the rest of the workshop could feel like a discussion about making instead of gathering precise details about a technique.  She captured the importance of experimentation. 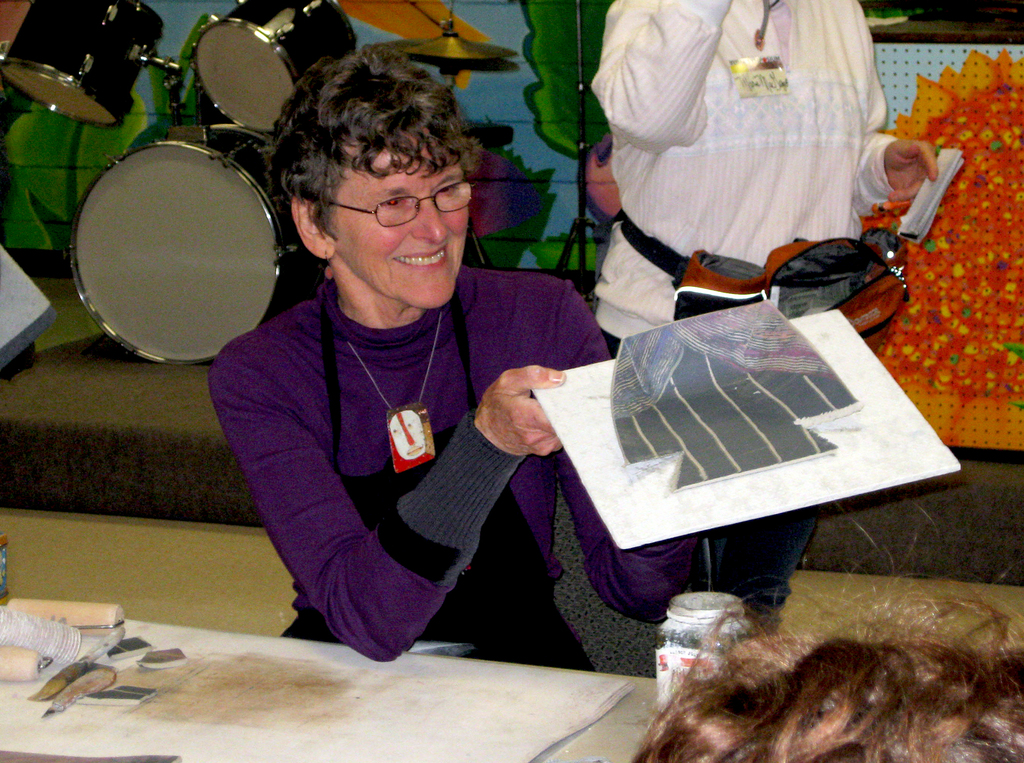