Crafthaus Editor: Let’s start with your personal background, I understand yours is fairly unusual.


Richard Peterson: Well, I grew up really low-income. It started off with me, my mother, and my father living in a trailer. At some point, when I was little, right around the time my younger sister was born, my father got addicted to heroin. He also joined the military and my mom split up with him. My sister and I lived with her as a single mom. She worked at a factory at night and we had babysitters to take care of us.

After a while, my mother got remarried, and my stepfather was abusive towards us. He was a real jerk, physically and verbally. I grew up not having the best childhood and living in the low-income part of Newton Falls, a little town right outside of Youngstown, Ohio. There’s a lot of drug activity in the area, especially in the younger community, because there really isn’t anything to do for young people. In addition, drugs is what everyone around you is doing, whether it is the adults, or other parents or the guardians who take care of you. All the kids I was around were introduced to drugs and alcohol at a much earlier age than one should ever be. I’ve watched a lot of my friends grow up and lose themselves to the same addictions that their parents and caregivers had.

One of the biggest topics in my work is about children growing up in that lower income environment. This is a problem that’s not really paid much attention to in the larger society. Many of the problems these kids have come from a lack of education and the lack of care from their immediate community. There is a huge drug problem in the low income communities and it is hidden. To the point that the fact that little kids smoke weed already seems to be accepted reality, it is ‘just fine’.

Crafthaus Editor: How young are these kids we are talking about?

Richard Peterson:  As young as third grade. Imagine that, third graders smoking weed, walking around town and nobody says anything. 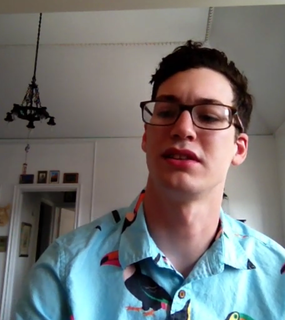 Crafthaus Editor: So, you grew up just like these kids you are describing, who smoke weed. What was different for you? Why did you not do drugs?

Crafthaus Editor: Or maybe you did?

Richard Peterson:  Yeah. I got into drinking really young. I started drinking when I was in second or third grade, but that’s what the people I was hanging out with at the time were all doing.

Crafthaus Editor: Where did you get the booze?

Richard Peterson:  Not from my parents, but I would go over to friends’ houses where I knew that their parents let them drink, so we all ended up drinking at that place. Obviously, nothing but bad things can come from this. You know how poorly adults react to alcohol, you can imagine children reacting even worse.

I was also constantly getting in trouble at school. I was really violent as a kid. Growing up in that community, with my abusive stepfather, violence was all around me, it never stopped. There was one time my mom had to take me to the juvenile justice center and drop me off because the school threatened to expel me if I got into another fight. This was in fifth or sixth grade. I realized at that point that something had to change in my life or something bad was going to happen.

Crafthaus Editor: You were in seventh grade at that time and were aware enough of yourself and your surroundings to see where certain influences and behaviors come from. What else happened at that time? I understand you started to take clay classes at some point? 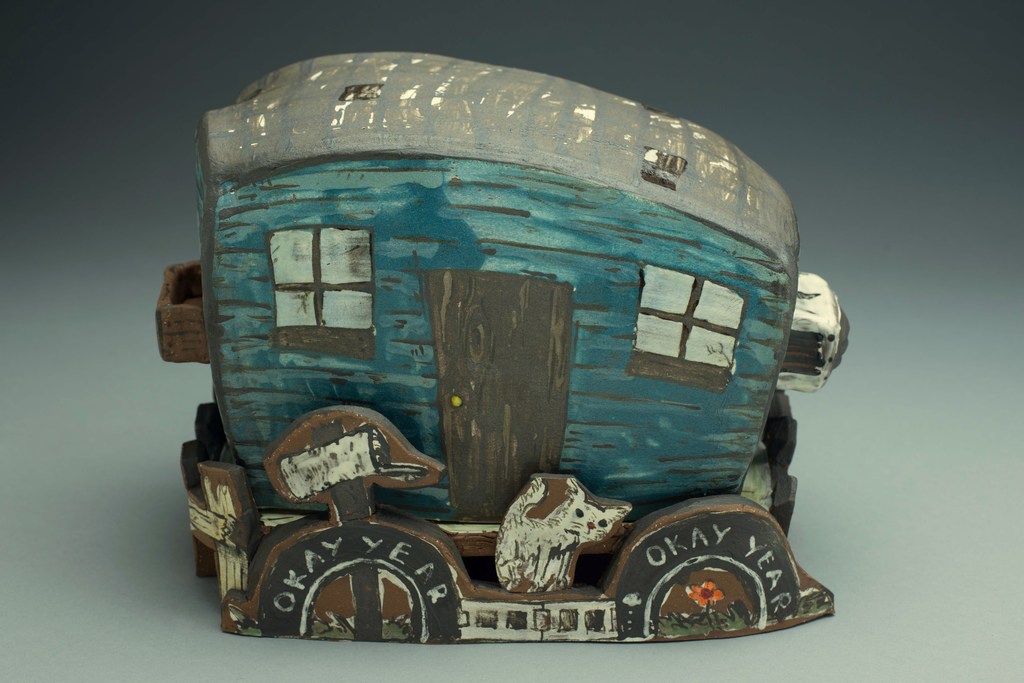 Most of all of my work about my childhood is revolving around the cycle lower income families are caught in. My family was one of them. With my father addicted to heroin, I had a prime example in front of my eyes of what not to do. I only had an idea of a possibly better life from the fact that my mother worked so hard to rise above what so many in my environment got trapped under. When someone in my immediate family fell into the same situation, having a child born to a father who was addicted to the same substance that ruined so much of our life, the truth and apparent inevitability of this cycle was too much to face for me. This piece shows a beautiful little home on the outside. Hiding within is a cup laid down on a mattress that's sagging and soaked with blood and urine. The cup reads "My first Meth Lab" and shows a small child holding drugs and a rattle. Under the mattress lies a man, overdosed and dead. Out with the old, in with the new.  --- Richard Peterson, 2015.

Crafthaus Editor: How did that come about? Why were you interested in clay?

Richard Peterson:  Well, I wasn’t. But I was always interested in art. I was the kid who was constantly getting in trouble for drawing. I remember in second grade I was sent home with a note to my mother that I wouldn’t stop drawing in class. They tried to medicate me but my mom took me off the medication because she said I stopped drawing while on it. I wasn’t being myself on medication and she didn’t like that. She has always been supportive of my drawing.

By the time I entered High School, when I got into clay class, I was already heavily influenced by illustration, but I never considered going to college for it. I was lucky in that I had an amazing art teacher in high school, Jon Hill, who really helped change the path that I was on at the time, as well as changing my thinking about education and furthering my life outside of this little town.

I took a clay class and immediately fell in love with the material, how lively it is, how fun and gestural it can be and how serious at the same time. The ability to have influence outside of a piece of paper struck me immediately and I understood this instinctively. The fact that the same drawing that I was doing in my sketchbook could be translated into a drawing on a cup and that people wanted that cup because of the drawing, that was an amazing eye opener for me. I gave these cups away for free at that point and they weren’t the best cups in the world. But the influence clay had on me was immediate. People would come back and say, “I use your coffee cup every day.” That’s an amazing feeling. They participate in a conversation with me, everyday. It took me a while to actually fully understand the severity of the effect that clay had on the everyday, compared to what my other illustrations were doing, because my other illustrations never saw the light of day. They were a piece of paper that was tucked away after it got graded. But for some reason the cup lived on. That was really important to me.

I actually went and visited Berea College, Kentucky, when I was thinking about going to college. It’s a school that only accepts 400 students a year, I believe, and they only accept students of a certain poverty level. You have to be not well off in order to get into this school and they don’t take any of your money. It’s completely free. It’s also super-competitive. I visited a few times and I thought I had everything set up, I was going to be the resident potter and apprentice - but the school denied me. They said I made $200 too much. I think the real reason was my low grade point average. Like I said, I wasn’t the best student in school.

After I could not get into Berea, I visited the University of Akron, Ohio. One of their studio techs had come out and done a demo at my High School earlier. She threw some pots and talked about furthering our education. That impressed me. I didn’t find out until much later that Jon Hill, my instructor in high school, had actually set all that up. He knew I was thinking about going to art school but was still a bit on the fence about it.

I went to an open portfolio event at the University of Akron where High School students are invited to come in and have their portfolios graded. It was so lovely seeing the positive response to my clay work at a different level, a level outside of high school, and then realizing that I could actually do this at the university if I wanted to. Akron University ended up offering me a scholarship and I couldn’t pass that up. So this is the story of how I ended up going to school for ceramics.

Continue reading the next segment of this series: "Hard Work"